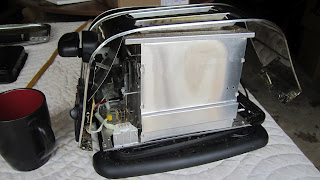 We had a Repair Cafe last Saturday, which is to say four of us got together to fix stuff in my garage, and two other friends brought some items by to challenge our repairian savvy. Mike fixed a short in one of his favored radios. I took the sides off a toaster to try to figure out why the bread won't stay down without considerable coaxing.

Tara brought a coat stand that needed a screw and a nut in order to stand proudly once again. The nut was not available at the store, but my neighbor found the right size and thread on an old lamp he's getting rid of. Tony rode his bike over from Kingston, carrying the bottom of a blender that refused to show its symptoms without the top.

With the internet, our nearby Ace Hardware store, and some common sense about safety, it's possible to fix quite a few things that would otherwise get hauled to the landfill. Over the past year, outside of the repair cafe, I managed to fix our garage door, our 15 year old Bosch washing machine, and when my 94 Ford pickup suddenly started leaking gas last week, I was able to take off the bed and peer down at where a mouse had made a furtive living above the gas tank until it decided to sink its teeth into the gas line as if it were corn on the cob.

Youtube videos, chat rooms and blog posts provide the support needed for this sort of cautious adventuring that can prolong the lives of possessions and save thousands of dollars. The repair cafes extend that with the power of collective thinking to solve problems, and the pleasures of good company. I think of us as kindred spirits to WALL-E, fixing stuff with our wits, spare parts and the tools at hand, wishing we could fix the planet, too.