Princeton's Carbon Footprint: An upcoming report, its history and meaning 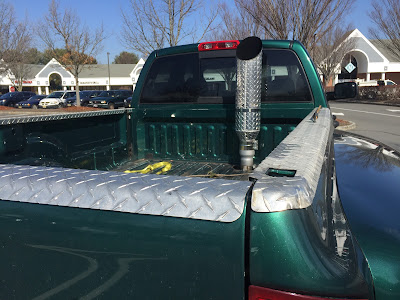 Note: Sustainable Princeton will present the findings of an inventory of the town's greenhouse gas emissions on Tuesday, March 27, at the Andlinger Center. Details at this link. Below is a history of Princeton's long quest to comprehend its impact on the world's climate, and my thoughts on the powerful ethical and emotional implications of a town's "carbon footprint."

Through a generous grant from the Robert Wood Johnson Foundation, Sustainable Princeton has been able to fund a study of Princeton's carbon footprint, that is, how much carbon dioxide, methane and other greenhouse gases we are collectively sending skyward. That number represents the extent to which we as a town are trapped in a carbon economy, and thereby contribute daily to a collective, chemical undermining of nature. The main greenhouse gas, carbon dioxide, plays important positive roles in the earth's atmosphere, oceans, and in delivering to plants the carbon they use to grow, but as in our bodies, a significant change in its concentration can have disastrous consequences.

Few of us pay any notice to the exhaust pipes and chimneys in our lives, even though their emissions are quietly day to day determining our planetary fate. We abuse nature because we see little choice, because everyone else does it, because each individual's contribution seems insignificant, and because we can. Abuse can be inadvertent or, as in the photo of an outsized exhaust pipe in the back of a Dodge Ram pickup truck, a brazen show of power.

I may have been the first to attempt a carbon assessment of Princeton's energy use, in 2011, when I sought data from our energy provider, PSEG, on Princeton's consumption of gas and electricity. At the time, Princeton University was beginning to assess its own energy use, as was Sustainable Lawrence just down the road.

The premise, at least for me, was that awareness of our collective energy use as a town could help spur a move to use less, knowing the catastrophic global consequences of using carbon-based energy. We could compare our energy use year to year, and with other towns in the area, and thereby gain a sense of progress towards a shared goal.

My own experience with a home energy monitor, which displays how much electricity my house is using at any moment, suggested that knowledge is power. If I turned on the electric clothes dryer, our home energy use jumped by 3500 watts. Who knew? That's when we got clothes racks to hang-dry the clothes. A noisy, inefficient fan in the attic was replaced by passive ventilation. Turning off a few unneeded lights made the number drop even further. It was empowering and satisfying. We saved 35% on energy costs in the years that followed, with no loss in comfort or livability.

Immediate feedback seemed key in changing behavior. I dreamed of being able to go to a website where Princeton's energy use would be displayed in real time. Even more fine-grained data would allow neighborhoods to compete to see "how low we could go." But I quickly came up against the technical hurdles. PSEG was only set up to provide data every three months. Determining energy use by town government, or by the school system, required sending PSEG the meter numbers on every building. And then there's all the consumption of gasoline by cars and trucks driving through town. How to assess that?

I was stunned to learn that our town's biggest energy hog may be the incinerator that burns sewage sludge down on River Road. When natural gas prices were high, the town was spending more than one million dollars each year to fuel an incinerator most people don't even know exists. (I bet "Princeton's Finest" could outcompete Milorganite any day, and dramatically reduce our carbon footprint at the same time.)

In 2014 Heidi Fichtenbaum of Sustainable Princeton contacted me, wanting to pick up on my initial work with PSEG to quantify Princeton's energy use. I passed the data to SP's Christine Symington, who attended Hack Nights hosted by Code for Princeton, and sent the following update to me in 2015:

"Your past efforts to get this data were instrumental in getting a conversation started with PSEG that has led to us getting a commitment to getting updated data each quarter.


We now have the start of a webpage that gives anyone in Princeton the ability to visualize our collective energy consumption. The team working on this included a 7th grader that designed the logo & created the styling for the site. Keep in mind that this is a work in progress. Ideas out there to expand on this include:


Then, in the fall of 2015, Christine published a report on Princeton's energy use on the SP website, the aim being to identify a baseline of energy use from which to measure Princeton's progress towards reducing energy use 20% by 2020.

The big question going forward will be what Princeton does with that number. If we've learned anything in this long struggle to get action on climate change, it's that numbers don't make people change their behavior. The number on my home energy monitor moved me to action only because of a feeling in my gut that it is ethically wrong to be using energy that risks the future of our children, our nation, and a livable planet. How, we must ask, if Princeton is to be an example to the rest of the world, do we plant that feeling of ethical revulsion deep within more than a conscientious few of its residents?

One heartening development over the past year or two has been the growing gut-level rejection of discrimination, sexual harassment, and most recently gun violence. These issues have gone from the level of intellectual and political objection to a cathartic, visceral imperative that such behavior must be purged from society.

The Academy Awards this week was emblematic in its conscious shift towards inclusion and respect. And yet, predictably interspersed throughout that program and many others are car commercials that not only tolerate but glorify our collective chemical abuse of nature.

Our senses, of course, will not help us to reject the daily practice of pouring more and more CO2 into the atmosphere from the underground fuels we burn. Invisible, odorless, it all seems harmless enough. But if we were doing to our closely regulated bodies what we are doing indiscriminately to the earth--raising its temperature, acidifying the waters that sustain its life--we would literally feel in our guts the revulsion necessary to drive change in behavior.

It will be interesting on Wednesday to see the numbers that Sustainable Princeton has come up with, how business, commercial, residential, school and municipal sectors compare, and to see if the numbers are fine-grained enough to help drive decisions that will lead to substantive, measurable change.

Climate change is deceptive on so many levels. It is human nature to cling to the status quo, and yet it is the status quo that now drives radical change that increasingly threatens the lifestyle we wish to preserve. The more we cling, the less control we will ultimately have, as rising oceans claim our cities and super storms devastate communities. Each of us is left to grapple with the personal predicament arising from a collective failure, as in some lines I read at a recent poetry event at the library:

Pessimists will say that it's already too late, that too much change is already baked into the system. But that is just one more in a long line of convenient excuses for inaction. Ending abusive behavior helps everyone. It not only makes life better for the abused, but also makes the former abuser a better person. Reducing the incredible disrespect for nature embedded in our economy and our culture will free us from an existential predicament we face as individuals every day, and make us better people.


A version of this piece was first published by PlanetPrinceton.com.
Posted by Steve Hiltner No comments: 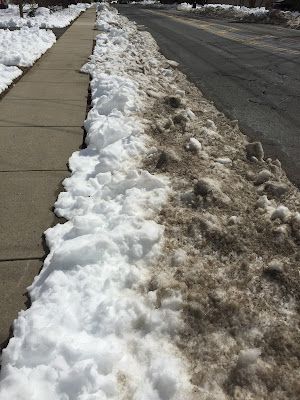 There is an important distinction that is often not made, between the impact of people and the impact of the machines people use. Machines are useful, even lovable, and yet the ones with exhaust pipes are, for all their fine attributes, contributing to a chemical assault on nature. That assault may be unintentional, undramatic, and mostly invisible, yet it is relentless and permanent in effect. Some of us participate reluctantly, others obliviously.

This photo is one of the ways to visualize the difference between People World and the Machine World we participate in. Pedestrians and bicyclists (it's legal to bicycle, respectfully, on most sidewalks in Princeton) leave no trace, while the snow is symbolic of the mess cars and trucks make of the world. That dirt that can be seen will seep into the ground or be washed away as a plug of pollution in local streams during the next rain, but is also symbolic of the larger, permanent damage: the CO2 rising from the exhaust pipes up into the air.

Once that distinction is clearly drawn in the mind as well as the snow, then one can begin to gain freedom from the sorts of machines creating slow havoc, and use one's own resourcefulness and partner with nature rather than the flawed machines. The aim is not self-denial but the pleasure of freeing oneself in more and more ways from the ethically challenged machines we feel dependent upon.
Posted by Steve Hiltner No comments:

Recycling Receptacle in a Princeton Park--Simple But Effective 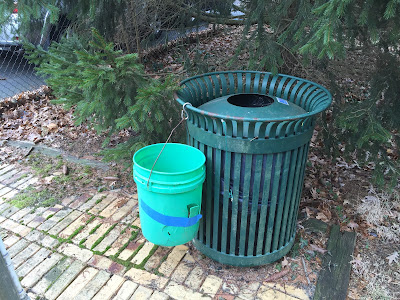 One of life's persistent questions, in Princeton or anywhere else, has been how to improve recycling in public spaces. I used to write critiques of recycling arrangements wherever encountered, whether here, in airports, or in travels around the world. One of the posts, Ten Tips for Improving Recycling in Your Workplace, speaks to the importance of pairing trash and recycling containers, and making sure they contrast visually.

This very simple retrofit, initiated by the Princeton Borough parks department probably ten years ago, is a good example of how easy and inexpensive it can be to add a recycling container to an existing trash can. The bucket used to have a recycling sign on it, contrasts visually, and is simply hung on the trash receptacle to provide park users with a clear choice. Though it may not be the most attractive setup, this combo has survived years of use, and works much better than sleek, high-priced combo containers that often put appearance ahead of functionality, confusing users by giving very little visual contrast between the recycling and trash receptacles.

Of course, the high degree of separation of trash and recyclables that this simple retrofit achieves is only one step in getting the bottles, cans, etc. actually recycled. The next step is for the park custodial crew to actually keep the recyclables separate from the trash when they empty the containers. As the Ten Tips post explains, anyone wishing to determine whether recycling is actually happening at their workplace, school, parks or elsewhere, needs to track each step along the way to the recycling facility.

An empty bottle, then, is a bit like a salmon swimming upstream, having to negotiate many obstacles along the way, any one of which could prevent it from reaching that place where new bottles can be born. Thanks to this simple retrofit in one of Princeton's parks, a lot of bottles and other recyclables have made it past one of the major obstacles along that path to recycling.
Posted by Steve Hiltner No comments: