Pink Dragons Take to the Trees in Protest 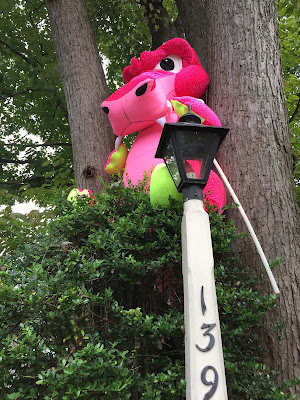 It hasn't made it into the news yet, but the pink dragons of the world are really pissed. With the power brokers amping up their brutal attacks on nature and democracy, and the White House transformed into a loony bin, pink dragons everywhere have taken to the trees and are refusing to come down until the world starts making more sense.

One passerby, who took a picture of her friend posing in solidarity with the dragon, said it's time to fight bad crazy with good crazy. Eventually the good crazy will overwhelm the bad, and life will be crazy good. Anyone else have a better plan? 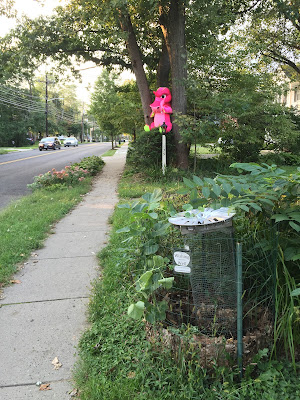 This particular pink dragon is a rescue, put out on the curb on a back street with a neighbor's trash a week ago. Just didn't seem right that it would end up squeezed into a garbage truck headed for the landfill.

I must admit to a little ambivalence about having this bright pink creature in the front yard, but this morning I glanced out the window and saw a young woman with a big smile, taking a photo. People need moments of surprise and happiness, now more than ever.
Posted by Steve Hiltner No comments:

One Way to Divert Scrap From the Landfill 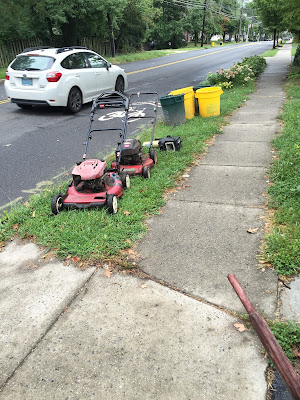 Another week, another 100 pounds kept out of the landfill. That's the idea anyway. These two rusted out lawnmowers and a very heavy pump, perhaps a sump pump, were rescued from the curb on side streets just before trash pickup, then put out the next day on busy Harrison Street for whatever maven of scrap might be passing by. I never go looking for the stuff, but encounter it mostly while walking the dog, then try to remember to collect it prior to trash pickup.

Within a day or two they were gone, whether to be miraculously repaired, or used for parts, or melted down for metal. It's one small way of bucking the tide of disposability--a tide that has spread from small things like packaging to larger things like democracy and ultimately the planet itself.
Posted by Steve Hiltner No comments:

Our Very Own Partial Power Outage

There are many silent, hidden connections between our homes and the outside world that we take for granted. Whether underground or overhead, the water, sewer, gas, and power lines feed and drain our homes like the umbilical cord on a babe in the womb. Occasionally, this infantile condition is interrupted. It could be a storm that rips branches from trees, shattering that delicate network of electrical lines that overlays the town like a giant spider's web. Or it could be a break somewhere in that sprawling network of water, gas and sewer lines silently serving us beneath our feet.

We recently had two interruptions of that network of an unusual variety--one involving water, the other electricity. 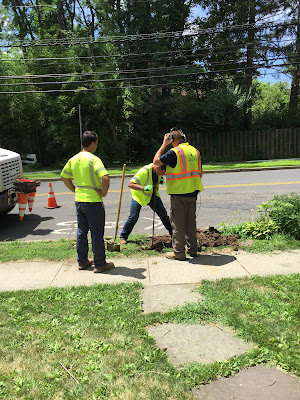 The first had an American Water crew scratching their heads out in front of our house. Across the street, a rivulet of water had spontaneously begun flowing along the curb, source unknown. They suspected that the water main, buried 6 feet down on that side of the street, had sprung a leak near where our house's water line branches off. To confirm, they tapped into our water line and listened with headphones for telltale sounds transmitted through the pipes, like a doctor with a stethoscope. 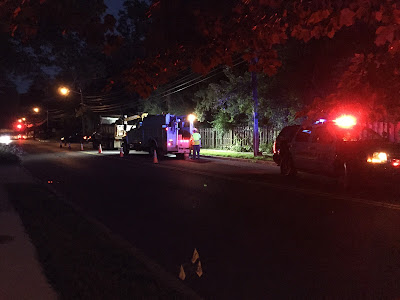 The supervisor was not happy, as a leak in the water main meant a lot of sleuthing to pinpoint its location, then a long night of digging to find and repair the leak. 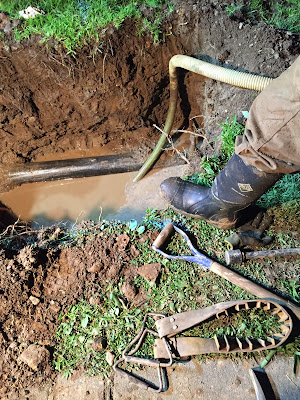 The hours of sleuthing paid off, as their digging led straight to the leak in the water main, about a foot from where our skinny little 1" water line branches off towards our house. The supervisor explained that winter and summer bring different kinds of breaks. A summer one like this is linear, and often precipitated by the increase in water pressure in the pipes. The water company increases water pressure in summer to compensate for increased use--mostly to water lawns. Theory: More lawns means more watering, which means more pressure in the pipes, and more leaks. Another reason to wish people didn't have big, unused lawns? 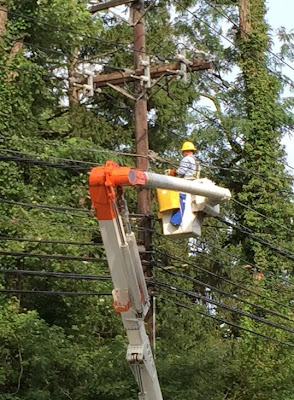 The other interruption was electrical, and this one was really weird. Over the past half year, we have on several occasions lost partial power in the house after several hours of slow rain. The power then comes back a couple hours after the rain stops. Some parts of the house lose power, others don't, with no clear pattern. Because there was still power here and there in the house, we could run extension cords to keep the frig, microwave and internet going, and full power always returned.

These periodic partial power outages were associated with a loud pop, coming from outside in the general area of our electric meter. The first time, the pop was loud enough to prompt the neighbor to go out with a flashlight in search of the source.

The situation seemed dangerous, so we called an electrician, who couldn't find anything wrong with our wiring. And a PSEG guy came out and told us that nothing was wrong with their supply lines. We learned that PSEG's responsibility ends at the connection to the house, before the lines drop down to the meters. Everything beyond that is our responsibility.

We didn't do anything more, other than hope it wouldn't happen again. This, interestingly, is the same response people have to climate change which, in contrast to a foreign invasion, contributes to disasters that come but don't stay. As soon as the threat recedes, be it a flood, drought, or forest fire, the tendency is to return to life as usual without making any changes.

Recently, the partial power outage happened again, and again I heard a loud pop, this time associated with having turned on the microwave. Fortunately, the electrician was able to come before full power returned and run some more tests. He confirmed that wiring inside the house was fine, and asked us to get the power company out to unlock the meter so he could have a look. This time, we got one of the better PSEG employees, who confirmed the electrician's diagnosis that one of the two "legs" coming into the house lacked power. Rather than claim the problem was ours and not PSEG's, he looked over towards the utility pole across the street, and said he thought he'd found the problem.

He parked his truck next to the pole, went up to have a look, and a half hour later the problem was fixed. Turned out a connection for one of the "legs" at the utility pole had gone bad. Rain may have been able to get into the wiring out there. He said it was strange, since water usually improves connections, but in this case made it worse. I shook my head--yet another baffling aspect of electricity--but was happy and relieved to have the problem finally solved and full power restored.
Posted by Steve Hiltner No comments: