The Four "C"'s Princeton Needs to Reduce, Reuse, and Recycle 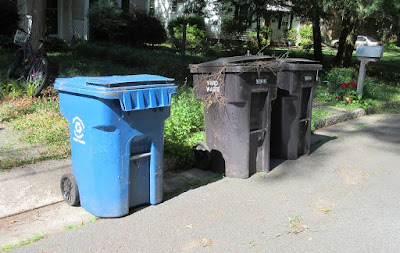 Containers: In municipalities outside NJ, and perhaps inside as well, the 32, 64, or 96 gallon carts with wheels and attached covers are the norm. Every homeowner has the same containers, rolls them out to the curb once a week, then stows them away. 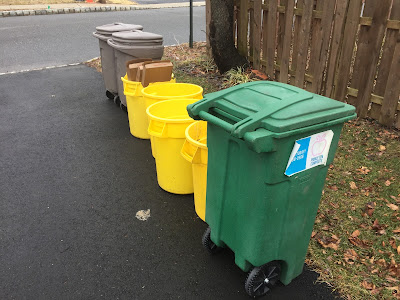 Princeton is not like that. Perhaps there's a resistance to conformity. Trash day brings out a hodgepodge of trash containers. The recycling containers are stubbornly undersized, uncovered, and unstable, and yardwaste ends up in endlessly varied piles in the streets and on the curb, for lack of containerization beyond a limited collection of yardwaste bags.

The situation begs for better containerization. More and more Princeton residents purchase trash carts with lids and wheels, proving the utility and popularity of this design. Though a small version of the standard cart design has been used for the curbside organics (foodwaste) collections (green cart in photo), there are larger versions widely used elsewhere for trash, recycling, and a mix of foodwaste and yardwaste. The lidded carts also provide an opportunity to put instructions on the lids, to improve compliance (see below).

Compliance: Lack of compliance is an ongoing problem in recycling (plastic bags, etc.) and both containerized and loose yardwaste collections.

Consequence: Princeton has cut back on the spring/fall yardwaste bag pickups because people were putting dirt in the bags and Lawrenceville didn't like that (see "control", below), but another approach would be to maintain or expand containerized pickups while enforcing the rules. Lack of consequence drives lack of compliance. Though enforcement of rules for throwing loose yardwaste in the streets proved very difficult, it would be relatively easy to enforce regulations for containerized yardwaste if compost carts were provided. The carts can be clearly labeled as to what can be put in them, and since collection is done by town crews (unlike recycling and trash), notes can be left on the carts alerting the owner of any infraction.

Control: Princeton's recycling program is run by Mercer County. That means that the town has no control over the container design and what people put in them. Thus, we're still stuck with undersized green and yellow tubs that overflow and spill in the wind. On the composting front, Lawrenceville owns and controls the composting facility, and because the facility apparently still has a grinder that cannot grind leaves and sticks at the same time, Princeton residents are required to separate brush from leaves. This requirement complicates any move towards the sort of streamlined containerization of yardwaste one sees elsewhere in the country, where leaves, food scraps, and sticks can be tossed in the same compost cart. State regulations will pose an additional hurdle, since the most logical and efficient solution--co-composting of food scraps and yardwaste--requires a special permit in NJ.

These four "C"'s all impact a fifth, namely Cost. For an example, Princeton has had four separate pickups for compostables: leaves, brush, yardwaste bags, and organics (foodwaste). That's a lot of heavy vehicles driving down the street, and a lot of administrative time working out complicated schedules. Though it would be nice to be wrong about this, the cost of all these various pickups has yet to be analyzed, as far as I know.
Posted by Steve Hiltner No comments: