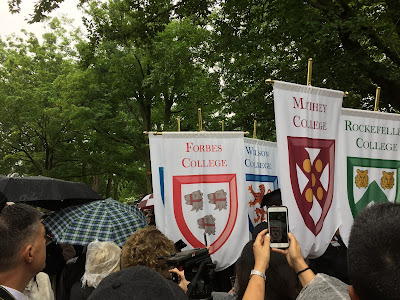 It was a misty and misty-eyed day on the green in front of Nassau Hall as the class of '17 was formally anointed with degrees. There is so much quality stuffed into the bounded space of Princeton University, in the architecture, the brain power. A week is devoted to celebrating it all, first with an infusion of alumni, then with three days devoted to the graduating class. This year, I was invited in, as a proud parent, to bathe in orange and black, which happen to have been my school colors growing up in a small Wisconsin town. Our mascot was a bulldog, from which I may have gained some degree of persistence in life, though as a beast it lacks the lithe charisma of a tiger. My day of birth mixed with the graduating class's year--a prime coincidence given some additional gravitas by F. Scott Fitzgerald's graduation a century prior. 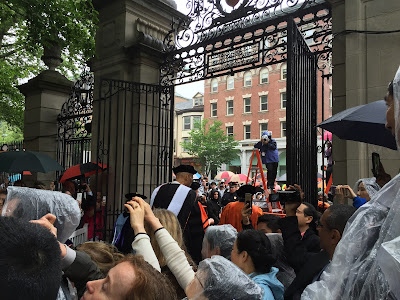 Among those receiving honorary degrees was Kareem Abdul-Jabbar, basketball star from my youth, jazz aficionado, and doer of good in the world, still head and shoulders above as he walked through the gates.

There was another familiar name from my youth being honored along with Kareem--Jeremiah Ostriker, an astrophysicist who had been a student at Yerkes Observatory in that small Wisconsin town when I was growing up. He went on to be one of the discoverers of dark matter in the universe. 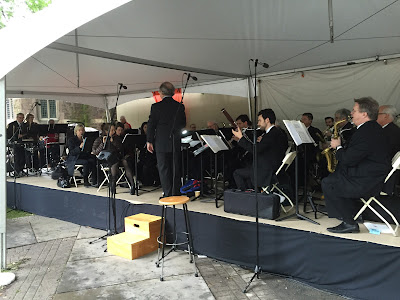 Stirring music wafted across the crowded green, and stirring words bounced off the surrounding buildings as the rain held off. It was a good feeling to witness my daughter walking through the gates to a gallant melody from Gustav Holtz's The Planets. Later, when the band was viewed from closer up, the body language of the conductor and musicians suggested a less than inspired feeling behind the music, but they were professionals doing what they do very well.

The class victorian, in her speech, focused praise on the un-degreed--the people who day after day provide food for the students, clean the bathrooms, and offer a chance for any student who takes the time to discover magic and authenticity in plain-spoken lives. I, too, having grown up in an academic family, was attracted to that plain-speech that came not from books but from everyday experience.

In retrospect, it seemed a call for reclaiming a connection with the working class, much of which has drifted into a self-destructive allegiance with faux-populist, authoritarian-leaning politicians.

President Eisgruber's speech, too, was in part a response to the forces that are working from without and within to erode and eviscerate institutions that once seemed so secure.


"Overcoming the fractious politics and bitter disagreements of our day will require empathy; it will require friendship and love; it will require an ability to connect and collaborate together. It will also demand that we find a way to restore and rebuild faith in the institutions, of government and of society, that allow us to take on projects together. That is no easy task, for we live at a time when confidence in our shared institutions is ebbing. People are losing faith not only in government, but also in business, journalism, and non-profit organizations."

What he must know and cannot say is that words like "empathy" and "us" and "together" are anathema for those who gain power by pilloring the despised "Other" and who thrive on division. How, it must be asked, can there be so much intelligence in the world, so much analytical power, so many wise words finely crafted over centuries and easily accessed, and yet power accrues to the incurious, the callous, the arrogant and the petty?

Within the comforting embrace of campus walls and elegant gates, as good deeds were praised and the graduating class was called upon to serve the nation, I watched swallows patrolling for insects above the verdant canopy of beneficent trees. Other birds, in twos or threes, passed through, barely noting our presence as they hurried on to some distant destination. Then the birds and their vibrant energy and skill were gone, and a lost balloon rose higher and higher towards the clouds. I imbued it with meaning, at odds with the occasion, as it slipped further away. The balloon became our prospects, given political sabotage, for stopping runaway global warming. Powerless to retrieve it, I watched as it faded to a speck and then disappeared into the gray mist of low-hanging clouds.

But no, we are buoyant, each imbued with spiritual helium. Dark matter cannot draw us down. The clouds may threaten rain but cannot deter. The faces of the regally clad and newly anointed, passing through the gates at long last, were full of joy, relief and expectation. Kareem still stands tall, unbowed by age and the nation's political trajectory. Gustav Holtz still stirs the noble bedrock at our core.

President Eisgruber quoted one of his predecessors, Bill Bowan: “Institutions exist to allow us to band together in support of larger purposes; they permit a continuity otherwise impossible to achieve; and they allow a magnification of individual efforts. Learning to make the accommodations that institutional affiliation requires is not always easy,” especially for people like our students, who have been encouraged to cultivate “critical habits of thought and a fierce independence. But there is a need to cooperate and collaborate, as well as to strike out on one’s own, if important societal ends are to be served.”

Those words were spoken to Eisgruber and others in his graduating class of 1986, as Ronald Reagan's administration was spreading pessimism about government and collective effort in general, promoting instead the individual as the all and end all. That pessimism has grown, deepened, hardened into an ideology impervious to evidence or urgency, and now leaves us helpless and paralyzed, as we collectively create problems but are denied the chance to collectively solve them.

Still, hope awaits in the wings, of vibrant birds overhead, of graduates dispersing to pursue their dreams, and the spirit that flies in timeless melodies.
Posted by Steve Hiltner No comments: