How to Parallel Park in a Parallel Universe 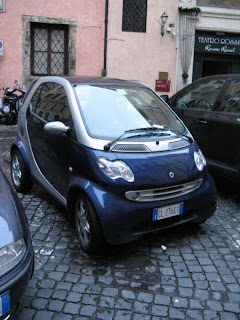 If you don't like the sight of parking garages, and the thought of how much fossil fuel oversized cars are consuming, then the old neighborhoods of Rome can come as a relief. Narrow streets and very limited parking has created what for an American is a parallel universe populated by scooters and tiny cars.

The "smart" car--a small car with an attitude that is coming to the States this year--is a common sight. It's so short it can park like a scooter if the space is too minute for parallel parking. 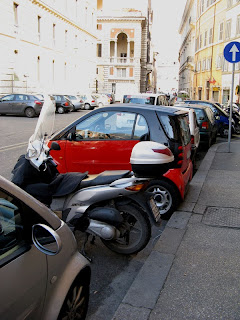 I had read that Rome's streets are noisy and dangerous, but in the old district, at least, there was a lot of gentle driving going on, and the reported racket of car horns turned out to be only a periodic, polite peep. 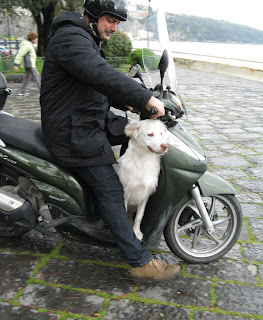 When I was ten years old, I visited Europe and, when I wasn't throwing rocks in alpine streams in an imaginative effort to re-sink the Bismark, I was admiring the scooters that quietly zipped people around. Decades later, I have the same reaction. Motorcycles without the macho connotations.

A web search suggests that the 'smart' cars don't get particularly spectacular gas mileage--in the 30 to 40 mpg range. Scooters are up around 85 mpg.
Posted by Steve Hiltner No comments:

Email ThisBlogThis!Share to TwitterShare to FacebookShare to Pinterest
Labels: energy, Places To Go 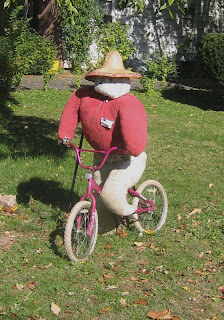 As you can see, now that everyone is feeling an urgency to do something about climate change, even the neighborhood lawn ornaments are taking to their bikes.

In fact, if people are changing their ways, it's hard to tell from this outpost, where the stream of cars passing by appears unabated. Even living right in town, where the shopping center is four blocks away and schools are a ten minute bike ride, there always seems to be some excuse to jump in the car. Maybe we're running late, or the clouds are threatening, and besides, it's just a short drive, not much gas consumed, so no harm done.

People are faced with a double abstraction: that the oft-declared global emergency of global warming will dramatically affect each of us and all we care about, and that our individual actions can actually affect the course of global warming. Though government can have an influence, the human impact on the planet comes down to the cumulative effect of individual actions. As individuals we feel peripheral, inconsequential, but are in fact central--the only show in town.

Self-denial is not in the national psyche, so any change in individual behavior needs to be driven by positive, self-actualizing factors rather than a willful forgoing of comfort and convenience.

Tipping the balance towards jumping on a bike, rather than crawling yet again into the stylish metal hulk, requires a cumulative change in thinking, until the pros of riding a bike in any given situation start to outweigh the cons. It helps to be aware that short, in-town drives are not good for a car, since the engine never quite warms up. The $50 refill at the gas station the other day was a fine wakeup call.

For those who can connect the dots between personal action and the nation's future, it's also possible to view walking and biking as patriotic acts, a way to incrementally reduce all sorts of undesireables: dependence on foreign oil, the national trade deficit, gas prices and inflation. There's also the unsettling thought of what sorts of corrupt regimes all that gas money is supporting.

Factor in a desire not to add to global warming, air and water pollution and the congestion of local roads, and before you know it the sway of your thinking has you on your bike, feeling empowered to change the world in some small way, immersed in the richness of the great outdoors, improving your circulation as you circulate through town.

The more one chooses the bike over the car, the more it becomes a habit, until the first response is to head for the bike rather than grab the car keys. There's also an expansion of acceptable weather that happens gradually, until even a light drizzle is no longer a deterrent. Water, I discovered after a couple years of periodically biking around town, is not toxic, and there was a raincoat hiding in my closet that is actually designed to shed it. Such are the rediscoveries that await in the long process of shedding car-dependency. 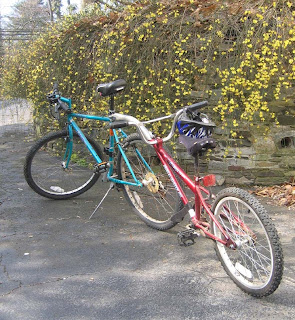 And then there is the fun aspect, which I discovered after reconditioning a trailer bike that someone had left on the curb (shop local). Get a kid on the trailer seat strong enough to contribute to the peddling, and the sensation is of flying down a sled run, or team rowing on Lake Carnegie. Even if the cold weather discourages biking to school in the morning, I can still pick up my daughter with this rig in the warmed afternoon.
Posted by Steve Hiltner No comments:

Email ThisBlogThis!Share to TwitterShare to FacebookShare to Pinterest
Labels: energy

Recycling and the Missing Feedback Loops

Recycling rates have dropped significantly in the past ten to fifteen years, not only in Princeton but throughout New Jersey. Nearly every county is out of compliance with state mandates to recycle.

The state recently passed the New Jersey Recycling Enhancement Act, which will raise money to support local recycling initiatives by adding a landfill fee for garbage generated in the state. Municipalities will see more money for recycling over the next year.

Sounds like a great idea, but I see the problem as having much to do with a lack of feedback at all levels of the recycling process. At the residential level, homeowners who chronically include non-recyclables in their recycling bin are not given any note telling them what they've done wrong. Though the county recently mailed a very informative photo showing what's recyclable and what is not, it's obvious that many homeowners don't look at it.

At the municipal level, Princeton borough and township recycling coordinators collect data each year on the quantities of various items being recycled in town, and send this raw data off to Mercer County. In return, the borough and township each receive annual grants of about $8000 from the state to support the coordinator positions. There appears not to be, however, any annual report generated from that data by the borough and township that would give a clear indication of trends and where to focus energy to improve participation. Without this sort of feedback loop, residents and their representatives run the risk of being unaware there is any problem.

Though you hear little talk about it being a problem, Princeton and just about every other town in New Jersey has for years been out of compliance with state mandates to recycle. The percentage of the solid waste stream being recycled in New Jersey has been dropping since 1995, from 45% down to 34% in 2004. More recent statistics are hard to find. The state mandate is to recycle 50% of the municipal solid waste stream.

Part of the solution to dropping participation rates may come from a new company doing business in New Jersey and nationwide. They're called RecycleBank, currently serve seven towns in south Jersey, and claim that by offering an incentive, they can often double recycling rates.

The program works something like this: Recycle Bank works with the existing waste/recycling hauler to refit their trucks, and supplies new rollout bins to residents. Recyclables are all put in one bin. The bin has a bar code, which allows the truck to identify and weigh each bin as it is unloaded into the truck. Over time, each resident will accumulate points according to the weight of materials he or she recycles. These points can then be cashed in for merchandise at a selection of retail outlets. This gives residents an economic incentive to recycle as much of their waste stream as possible.

Recycle Bank is essentially paid through the savings the hauler incurs in landfill fees, since the amount of garbage will decrease as recycling increases. Though the town can encourage the hauler to enlist in the program, it sounds like the hauler makes the ultimate decision, and may or may not want to change the existing contract it has with the town. One advantage for the hauler is that workman's comp expenses should go down, since the workmen will no longer need to lift heavy containers of recycled paper into the trucks (the Recycle Bank bins hook onto a lift fitted on the trucks).
The recycling committee of the Princeton Environmental Commission will be doing more research into this option for Princeton residents.
Posted by Steve Hiltner No comments:

Since it's now widely known that fluorescent light bulbs contain small amounts of mercury (sealed within the glass chamber), there's lots of curiosity about what to do with them when they burn out. One option is to take them to periodic disposal days at the Mercer County Improvement Authority site.

Since a long drive to dispose of a couple bulbs makes little sense, members of the Princeton Environmental Commission have been seeking out a location in Princeton where residents can drop off burned out fluorescents. Fortunately, a local business is generously offering to recycle your bulbs at no cost. You can take them to The Light Gallery at the Princeton Shopping Center. They accept fluorescent bulbs of all kinds--long, short, compact--from any resident of Princeton (not from businesses). If you have more than a few bulbs, you'll want to check with them first (924-6878).

The people at The Light Gallery then put the bulbs in specially designed boxes and ship them off to a plant in Bethlehem, PA for recycling.

According to Chip Crider, a local resident and businessman who looked into the matter, there are six companies recycling CFLs in the U.S. They crush the bulbs in sealed chambers and retrieve as much mercury as they can. The Bethlehem, PA recycle plant is the only one that also tries to retrieve the portion of mercury that becomes adhered to the glass, apparently by heating the material to high temperatures.