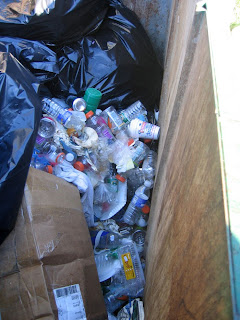 There are a lot of things that can go wrong with recycling at any institution, be it a school, university, library or business. People can think recycling is going on, when in fact all recyclables are ending up in the dumpster.

So much can go wrong because, for recycling to work, so much has to go right. Everyone needs to know what's recyclable and what's not, and act on that knowledge. The containers in the building need to be strategically placed and color coded, and then the recyclables have to miraculously make the journey all the way to the big containers behind the building.

Anywhere along the line, the system can break down. Indifference is contagious. Idealism quickly turns to cynicism when a conscientious employee finds out that his or her carefully sorted recyclables are getting thrown away by the custodian.

Recycling is mandated in the state of New Jersey, but from what I've seen, effective recycling is a rarity in buildings and at public and private events. To be successful, recycling requires participation by everyone. Everyone is responsible for the outcome, which is to say no one is. The cumulative effect of insignificant-seeming acts by insignificant-feeling people determines the result.

Adding to the problem, beyond widespread indifference, is what seems to be a cultural taboo against checking the rollout bins and dumpsters behind buildings. There is no other way of telling what recyclable "product" a building is producing. This is basic quality control--something we expect to be done with every other commodity in commerce, yet shun when it comes to recycling.

As you can see by the above photo from the high school dumpster, a lot has been going wrong. Cardboard, bottles, aluminum cans--all were getting tossed in with the trash when a few of us sought to resurrect a recycling program that had been stopped altogether through the summer. 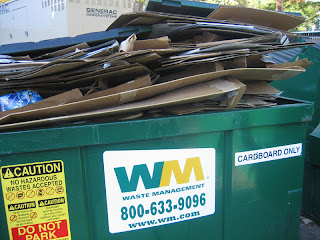 When recycling was reinstituted in September, one thing immediately started going right. The custodians mostly do a good job of recycling cardboard.

Other materials, like cans, bottles, juice boxes and paper, are also now getting recycled consistently at two of the four elementary schools--Riverside and Little Brook--thanks to more than one hundred emails between school administrators, staff and a particularly persistent community volunteer, and most importantly a few passionate teachers who have helped institute a program in which the kids carry recyclables from each classroom to central rollout bins, and the custodians help monitor the kids' recycling during lunchtime.

Other than custodial supervision of recycling at lunchtime, the program at the schools aims to take custodians out of the picture as much as possible. The key custodians are those that work after hours, unsupervised, and for them, recycling is extra work. Since many people are careless, the custodians frequently encounter a lot of trash mixed in with recyclables. Who can blame the custodians for not wanting to sort through someone else's trash? 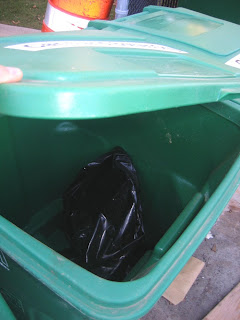 As of late November, there is no recycling of bottles/cans/milkjugs at Community Park Elementary, and there has been no news as to how Johnson Park is doing.
At the high school and middle school, the situation is particularly challenging, since the kids and teachers don't stay in one room all day, and so no one is responsible for any one room. The two schools have different problems. Though some recycling of bottles and cans is happening at the middle school, there is none at the high school, despite recycling receptacles in the cafeteria. Five rollout bins stand behind the school, ready for bottles and cans, and each week they are empty, except for an occasional black plastic bag with unwashed cans from the kitchen. The bag is a contaminant. 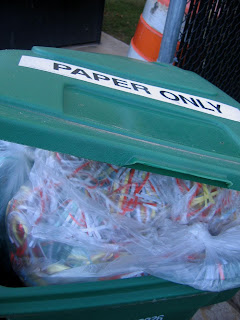 Despite the hundred-plus emails buzzing around, there has been zero recycling of paper at the middle school all fall (paper recycling is reportedly going to begin after Thanksgiving), and next to none at the high school. The bin in the picture shows shredded paper, still in a plastic bag, which is a contaminant. This week, however, for the first time, a "Paper Only" bin was completely filled with mixed paper, loose, unshredded, with no plastic bags. Thanks likely goes to the high school's student environmental group, which has been working to overcome the entrenched institutional realities and perceptions that make recycling such a challenge.

Past personal experience suggests that there is no recycling going on at school events, like school picnics or Back To School Nights. If any recycling containers are present, they are typically unpaired with trash bins, insuring that they will be highly contaminated with trash, which in turn insures that their contents will be tossed in the trash dumpster by the custodians.
Posted by Stephen Hiltner No comments: Links to this post

If you’re trying to reduce energy use at home or at the office, one of the handiest aids is a Kill-a-Watt. There are other similar devices on the market, but this is the most widely known. You can use it to measure how many watts most any plug-in device is using in your home. Since electricity makes no sound, most people are in the dark about what is consuming electricity in the house at any particular time. Though not available in retail stores for some reason, the device can be purchased via the internet for about $25.

Plug your computer, toaster, various power strips, TV and so forth into it and you’ll undoubtedly find some unexpected energy drains. If you leave the appliance plugged into the Kill a Watt for a couple weeks, it will give you the total energy consumed in that time period, which will provide a good sense of how much the appliance uses per year.

Here’s what I learned by using it:

My thin-screen computer and All-in-1 printer use much more energy than the ones they replaced. In other words, as the need to reduce our carbon footprints becomes ever more pressing, many of us are unwittingly switching to the electronic equivalents of SUVs.

Old HP printer: Zero watts when on but not in use

Newer All-in-One HP printer/scanner/fax/copier: 19 watts when on but not in use, 8 watts when turned off.

New TV: Holding off on that one, but likely to be a big increase. A thin screen similar in size to our old 19" TV uses a similar amount of energy, so the new models are slim in looks only.

I HAVE A 600 WATT GORILLA LIVING IN THE BASEMENT

It's called a dehumidifier, and it runs and runs. Mine is an Energy Star model, but that doesn't keep it from drawing what averages out to a constant draw of three or four hundred watts during the summer, and that's with it's thermostat set at the highest (70%) humidity level. A lower setting would cause it to run even more. Multiply that consumption rate by all the houses with basements in NJ, and you have a major contributor to energy demand, and therefore global warming. It may be worth looking into whether a ventilation system using fans would achieve adequate results, simultaneously helping to reduce any risk of radon accumulation. Another measure is to make sure the ground slopes away from the house, and that downspouts discharge well away from the foundation, to reduce the amount of moisture seeping through the basement walls from the soil.

My refrigerator uses 170 watts when the motor is running. To my surprise, it can occasionally use far more when it is dead silent. Whenever the defroster kicks in, its energy consumption jumps to 630 watts. Not much to be done about that, except to minimize the time the door is open, and maybe check the settings to make sure it's not running colder than it needs to. One thing to look for inside the frig is the switch that "reduces exterior moisture". This is a heating element that's supposed to keep the door from sweating. I turned it off, didn't notice any sweating, and thereby avoided the constant draw of 7 watts. The light bulb in the frig also produces considerable heat when the door is open.

The DSL modem and router draw 9 watts combined. The TV/DVD/VCR draw 5 watts combined when not in use. Plugging these, along with printer and other computer peripherals into power strips that can be turned off reduces overnight consumption by about 30 watts. You can buy power strips that turn off peripherals automatically when the computer is turned off. I saw these on amazon.com, but have yet to try them.

That's what they say about how comparatively expensive it is to heat anything with electricity. That little toaster oven on the kitchen counter, for instance, uses 1400 watts when on, nearly half of what the central air conditioner uses when it's cooling the whole house. Fortunately, toast is a quick operation. The hairdryer uses between 400 and 1500 watts, depending on the setting. The Kill-A-Watt wouldn't measure the electric clothes dryer's energy use, which turned out to be a mind-altering 3700 watts when measured with a whole house energy monitor called T.E.D. For comparison, a fluorescent light bulb uses 15 watts.

The Kill-a-Watt has its limitations. It would not measure the microwave oven, which apparently uses more electricity than the Kill-a-Watt is designed to handle. As it turns out, the microwave uses 1900 watts, not bad considering how quickly it heats things.

Posted by Stephen Hiltner No comments: Links to this post

Gutter Upkeep, or Pro-Activity for Amateurs 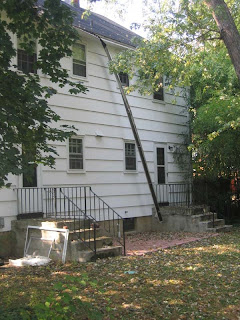 The word "upkeep" may well have had its origin in the high-altitude art of keeping gutters from spontaneously turning into downspouts. If they aren't kept up, they fall down, which is what happened to the rental next door. People don't naturally turn their attention to the condition of their gutters, but thanks to the inspiration of my neighboring landlord's neglect, I was moved to take action on my own.

Most likely what happened next door was that autumn's first falling leaves clogged the gutter, rainwater filled them up, and the resultant weight pulled the old nails loose from the fascia board. So I've been spending some quality time replacing every other old nail on my gutters with a screw, and adding gutter guards so that I don't have to keep climbing up there to clear them of leaves. Where would we be without inspiration, whatever its source?
Posted by Stephen Hiltner 2 comments:

Email ThisBlogThis!Share to TwitterShare to FacebookShare to Pinterest
Labels: home

Household Batteries Go in the Trash

In case you're wondering why household batteries can now go in the trash, here is the explanation on the Mercer County website. Rechargeable batteries, on the other hand, are usually recyclable at RadioShack and other similar stores.

Household batteries may be placed in your normal trash due to the fact that mercury levels have been significantly reduced and fall within DEP standards.

Posted by Stephen Hiltner No comments: Links to this post