Steps for the Taking 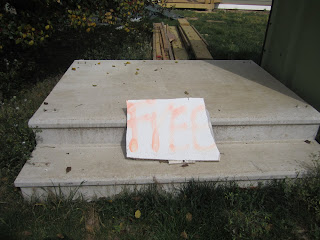 The sign declaring "Free" is fading, but the houseless steps at 22 Fisher Ave. still wait for the right person with the right need and the right rig to come along. The steps are 6 feet wide and about 1.5 feet high, with holes already drilled for railings. Given the weight of solid concrete, it might be easier to bring a house to the steps.
Posted by Steve Hiltner No comments:

I've recently written about climate change for the Princeton Packet, PlanetPrinceton.com, and today I had an opinion piece published in the Trenton Times, entitled "Earth's passengers should learn from the Titanic." Though the issue of climate change can seem grim, for me it is intriguing--a slow-motion drama with so many dimensions that reach to the core of our being and our fate, as individuals and as a civilization.

"The good ship America is steaming full speed ahead toward the 100th anniversary of the Titanic’s demise — the biggest symbol of avoidable disaster ever to sail the seas of human discourse. Given concerns about where we are headed, as a nation and as a planet, it’s worth asking what were the ingredients for disaster as the Titanic approached ice fields on a moonless night." ........

Note, April 15: If the link to the Trenton Times stops working, the piece can now be found at NewsCompanion.com.
Posted by Steve Hiltner No comments: 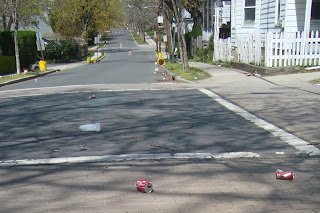 It was a wild and crazy day for recycling in Princeton, as high winds caused cans, paper and plastic to burst out of their tipsy confinement and head cross-town on unintended journeys. I was riding my bike down Chestnut Street when a yellow bin a block down spilled its contents on the street, sending a colorful, sparkly party of aluminum cans rolling uphill in my direction. Was this a messy sort of welcome? Or had the Swiss Family Robinson just unleashed a passel of anti-gravity logs to deter my invasion of the neighborhood? 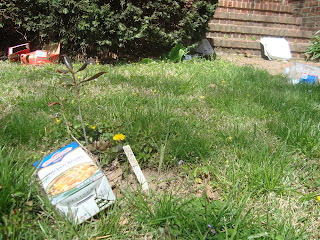 Meanwhile, on Spruce Street, some papers and plastic had their escape cut short by some shrubbery, 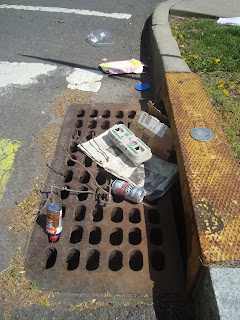 while others congregated strategically at stormdrains that could take them down Harry's Brook to Carnegie Lake and onward to the Atlantic. "Sargasso Sea, here we come!", they rejoiced, daring any hound to track their scent down the waterways of New Jersey. They'd heard rumors about the downcycling that would be their destiny if taken away by the recycling truck, and weren't looking back. 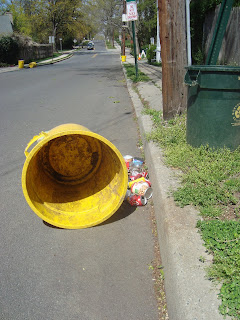 The great escape revealed the flaws in Princeton's aging but seemingly immortal fleet of green and yellow recycling buckets, which, being cyclindrical, tend to roll out into the street, 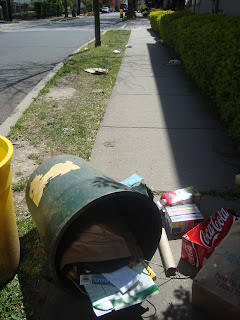 or onto the sidewalk. 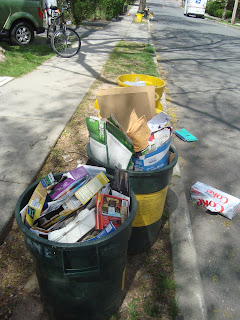 Their open tops and small size encourage overfilling, which plays right into the wind's complicity.

Somewhere, over the recycling rainbow, there exist large containers with wheels on the bottom and hinged lids on top. If other municipalities can have them, why oh why can't we?

On a more serious note: The alternative approach, seen in other municipalities, and also the more recent method of choice for private trash haulers in the township, is to have large rollout bins that the homeowner rolls to the curb and the worker rolls to the truck. The bin fits on a hook on the back of the truck that mechanically lifts and empties the bin. This saves the worker's back, and the lids help keep the contents safe from rain and wind.


More sophisticated and expensive systems have only one worker per truck, and the truck has an arm that reaches out and plucks the rollout bin from the curb, empties it and places it back on the curb.


If I were to argue for maintaining the status quo, I'd say that new bins would be costly and their construction consumes more resources. I'd wonder if the old bins could be effectively recycled. As heavy recyclables like newspapers and glass bottles become less common, back problems for workers may be easing. The current system may also employ more workers.


All of this would need to be explored, with an open mind. Even if the town wished to make a change, the county has the final decision, and only when the current contract with a hauler expires.

In the meantime, the wind will have its occasional field day, and before the municipality can slap the culprit with 10,000 counts of littering, it will have vanished into thin air.
Posted by Steve Hiltner 4 comments: