Mr. Sustainable Gets a Twofer 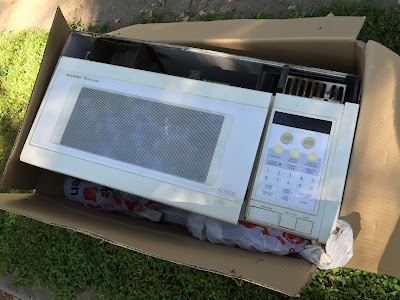 I've had two broken Sharp brand microwaves sitting around the house for awhile. It seemed a shame to throw them away. One just needed a new plate, the other a new doodad that triggers the door to open when you push on the button. The plate online cost not much less than a new microwave, and it seemed too hard to track down an order number for the doodad to open the door. So they sat in the basement, until one day not long ago I made a very promising find about a block away. Someone had thrown out a Sharp microwave. Even though it was a different model, I just had a sense this could be the long awaited solution to one of life's persistent problems. 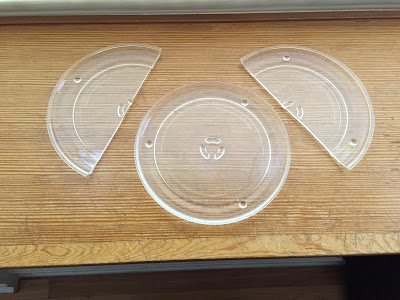 I tried the plate. Bingo. One microwave fixed. Now it was like a slow motion bowling ball--sent rolling down the lane, hoping for a spare--that had already knocked down one pin and was headed for the other. 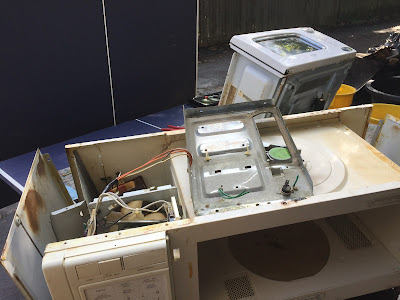 Freeze-frame for a few weeks of procrastination, because retrieving the doodad required some dismantling of the old abandoned microwave. A larger task requires a longer inhale of time before the exhale of action. Finally the day arrived when this seemed like the perfect project to do, in order to avoid doing something else. 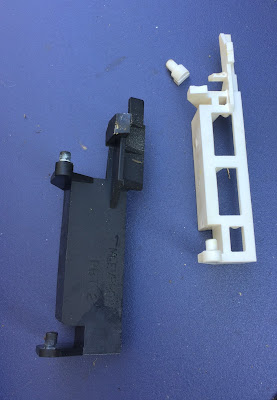 The extracted doodad was similar to the broken one, as I had suspected, but similar enough? Out came the hack saw to shave off some excess plastic on the scavenged replacement part, and bingo, the piece slipped into place. The figurative second bowling pin went down, 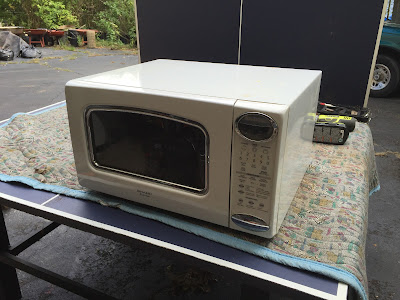 and I was now the proud owner of not one spared microwave but two.

The rest of the donor microwave went out on the curb, hopefully to be taken away by some scrap guy driving by. Within an hour, the motor with its copper coil had been extracted by someone, like an aboriginal hunter plucking the heart from fresh kill.

The satisfaction that comes from making this sort of repair is out of proportion to any actual gain. Megafactories spit microwaves out like popcorn. Spending this time and ingenuity would make sense in Cuba, or some other country with limited access to new stuff. It's strange to have 3rd world instincts while living in a 1st world country, and yet the hard-wired satisfaction suggests a deeper psychological origin, dating back to a time before factories, before extraction from the earth, when nothing came pre-made, when resourcefulness, the capacity to see promise not in human discards but in nature's offerings of wood, sinew and bone could make all the difference between shelter and suffering, feast and hunger. To engage those core faculties of resourcefulness and creativity, even for a prosaic end, is to feel more fully alive.

My rule is never to search intentionally, the better to experience that wonderful thing called serendipity, knowing that, as in this case, chance favors the prepared mind.
Posted by Steve Hiltner