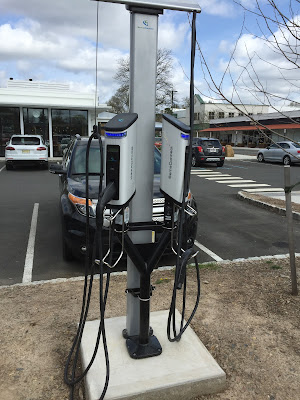 Symbolism teams up with utility as an electric car recharging station and Nomad Pizza occupy what once was a gas station. Shop or dine at the Princeton Shopping Center and treat your electric car to a 24/7 All You Can Drink special. Get a full charge for no extra charge.

Two reports thus far from friends who are leasing electric cars: One said the station charges up his car further than he can charge it at home. The other reported that both parking spaces next to the charging station were occupied by non-electric cars. Move over, gas guzzlers!

There are some very happy electric car owners out there. A Chevy Volt owner (50-60 mile range on batteries, plus gas engine backup) said she only paid $8 for gas in the past year, and charging the car at home didn't noticeably increase her electric bill. She mentioned some additive one can use to keep the gas fresh, since it sits in the tank for a long time.

The Chevy Bolt has a range of nearly 250 miles on battery power. I had been wondering when the future would arrive, to rescue the future from a persistent, resistant present.

The logic behind leasing an electric car rather than buying new outright is that the battery technology will advance quickly in coming years. Since many people lease, that means there are good deals on 3 year old electric cars, if one wants to buy used.

Next step: Build a solar array over the Princeton Shopping Center parking lot, like they've done at some of the Montgomery schools.