Bike Lanes Bloom on Hamilton Ave (for a week)

Update: Town council will be discussing bike lanes Jan. 26, 2021 at its 7:30pm meeting. Community input encouraged. More info on the meeting and how to comment can be found on the Princeton Bicycle Advisory Committee website. The post below dates from 2018. 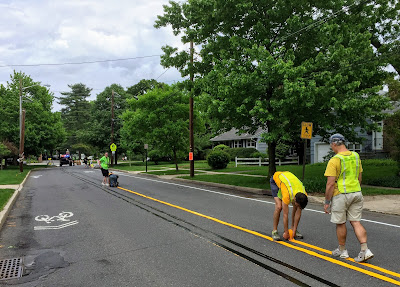 The sun finally came out Sunday, and with it sprouted some bike lanes on Hamilton Avenue. A bit like Brigadoon--that Scottish village that comes to life for one day every 100 years--these bike lanes will last only a week, enough time for the community to fall in love with them and call for a future and more lasting return.

As serendipity would have it, I happened to be biking by during the transformation, guitar strapped to my back on the way to perform in Onstage at McCarter Theater. Two council members and a Princeton Environmental Commission member were carefully shifting the centerline over to accommodate bikelanes on either side. The street was closed while the volunteers worked, bringing a sudden sense of relaxation and freedom from the din and danger of machines. For one afternoon, while being refitted, the road wasn't serving as a climate change factory. Councilman Tim Quinn, the leading force behind this initiative, hailed me in good humor as "the Dean of Sustainability" as I rode by, 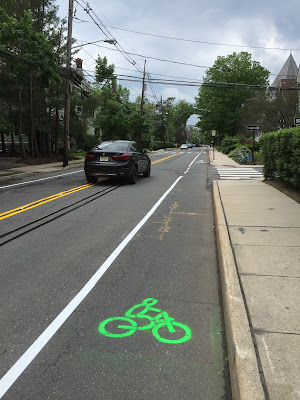 and more volunteers who had added new green bike symbols further up encouraged me to give the bikelanes a try. My usual approach to riding up Hamilton Ave is to use sidewalks when they're empty, in order to stay out of the way of cars as much as possible. A bikelane greatly simplifies the journey, with actual designated space provided for bicycles, so that people like me who want to stay out of the way of cars and pedestrians aren't having to constantly improvise a route. Significant car parking is being sacrificed while this "beta" bike lane is in existence, but for a week, until May 26 or 27, we get to enjoy and demonstrate the utility of these lanes. 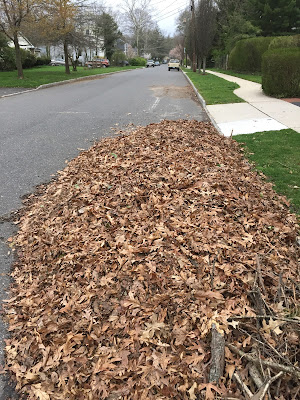 Any initiative to increase the number of bike lanes in town comes up against not only cars and parking, but also leaves and brush, which get piled in streets pretty much year round and, if not timed with scheduled pickups, can sit for weeks, forcing bicyclists out into traffic.

The laudable push for bike lanes could be coordinated with a gradual shift towards containerization of leaves/brush. Supplying homeowners on busy main streets with large-capacity rollcarts to containerize their leaves/brush would be a low-cost way of beginning the shift away from the traditional loose dumping of yardwaste in the path of bicyclists, while making our streets cleaner and more attractive.

In the meantime, give the beta bikelanes a spin this week. They worked great yesterday during my bike ride to the Dinky.

One Man's Walk Through Communiversity 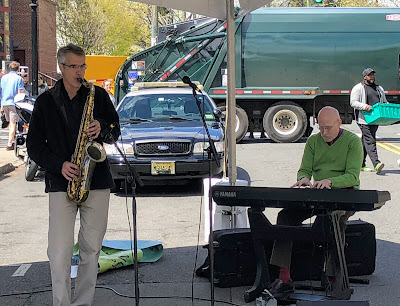 After performing at the Arts Council's Communiversity, with traffic kept at bay by an impressive assemblage of municipal vehicles, there was a decision to be made, either to adopt a jaded townie's view of this mass infusion of humanity as an annual annoyance to be avoided, or to dive in and explore? To flee or not to flee, that is the question. Buoyed by the pleasure of playing music for passersby, I chose the latter, saxophone strapped on my back, though an end around was needed to avoid the impenetrable human congestion on Witherspoon Street. 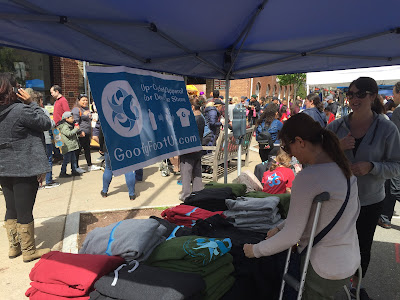 Nassau Street was much more easily navigated, allowing access to booths like Goofy Foot's not so goofy efforts to make comfortable clothing out of recycled plastic bottles. They told me that the color of the clothes comes not from extra dye but from the color of the bottles themselves, making each shipment's color a little different. 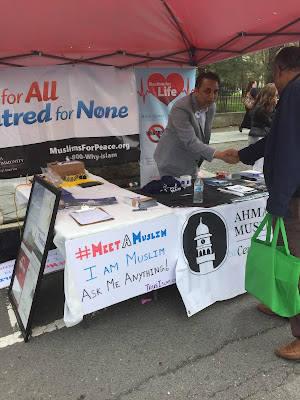 Then it was time for the novel concept of Meet a Muslim. I went over, shook some hands, and was told that the original jihad was directed inward, at getting oneself and one's own life together. That seemed to run parallel to some of my own thoughts about the pathological lack of self-scrutiny driving political polarization. One problem with the world is that what typically passes for a tough-minded skeptic these days is someone who only directs their skepticism outward, leaving their own views and beliefs unexamined. Deniers of the threats posed by climate change and invasive species are in this category. 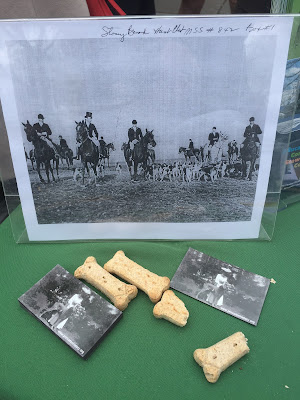 Then it was off to the Princeton Historical Society's table, which had a dog theme. Here's the Stony Brook Hunt Club, featuring hats, horses and hounds. I wondered if the family that brought what later became the Veblen House to town might have taken part in one of these outings, seeing as Jesse Paulmier Whiton-Stuart was a man of wealth who loved horses and dogs. He also took a strong interest in mathematics, which suggests it wasn't completely coincidental that he later sold the house to the great mathematician Oswald Veblen. 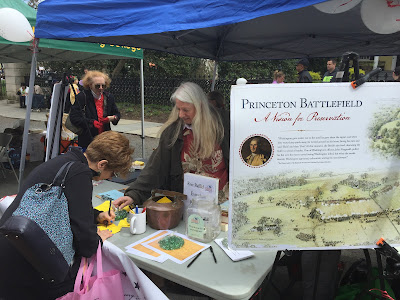 Kip Cherry was hosting the tent for the Princeton Battlefield Society.

What got me reaching for my wallet at these nonprofit tables tended to be food and drink, which the nonprofits were offering for less than the concession stands. Communiversity offers a chance to save money by donating to a good cause--a dollar for a can of soda to support a Christian ministry's work in Appalachia, a dollar for a cookie to support some school project. 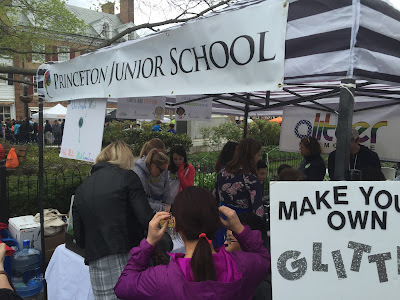 The Princeton Junior School had some initiative called a Wishing Garden, represented by a miniature garden of plastic dandelion seedheads that put a positive spin on what a lot of lawns look like this time of year. As with the introspective jihad, there was no time for deeper understanding. We got into a conversation about climate cabaret, and how it might fit into programming at the Junior School. 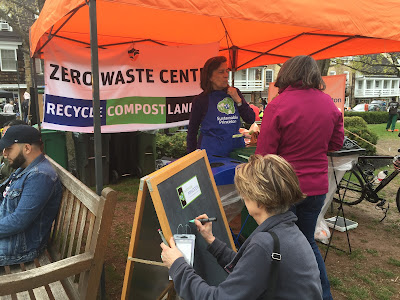 Talk of the climate cabaret continued at Sustainable Princeton's tent, with the head of the local Citizens Climate Lobby chapter.  I'll never get how sustainability is a niche interest, as if the future were optional.

It can be refreshing to make like a bee in a wishing garden of booths stretched along Nassau Street, talking to people wishing and working for a better world, with a saxophone strapped on my back like wings, feeling lucky that I needed only a bike parked nearby to fly me home.
Posted by Steve Hiltner No comments: