Giving Thanks for Improved Sidewalks 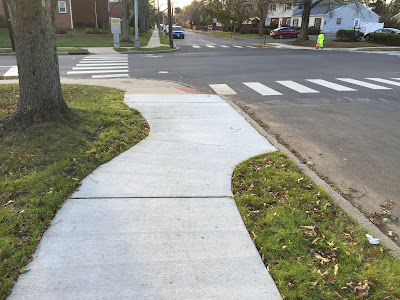 One thing I'm thankful for this Thanksgiving weekend is the new or improved sidewalks going in around town. My understanding is that Princeton no longer charges individual homeowners for repaired or newly installed sidewalks, eliminating the friction and delay caused by the old policy.

The town recently replaced bumpy sidewalks along a main route taken by kids going to PHS and the middle school. The value of smooth sidewalks becomes most vividly apparent if you walk with someone who uses a walker. 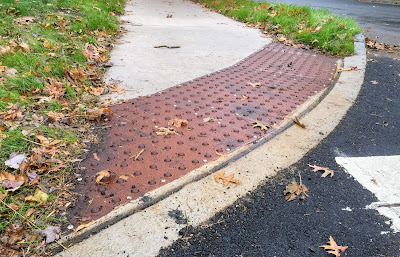 It's nice to see workers improving infrastructure in town. A closer look reveals the craftsmanship involved. The less demand for custodial functions like picking up leaves piled in the street, the more resources can be channeled to these infrastructural improvements. 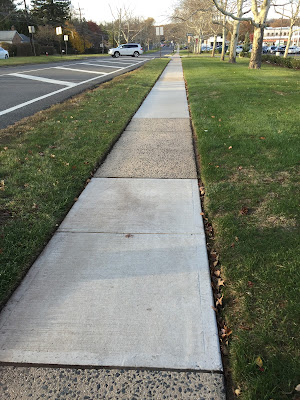 May this sidewalk's utility extend far towards the horizon.

People who look honestly at the past and acknowledge deep injustice are more likely to look honestly at the present as well. In fact, past injustice can help us better understand current injustice, and vice versa. There is the ongoing legacy of slavery and discrimination, and the parallel tragedy of ongoing dependence on fossil fuels. Few people--when they drive up a hill with but a nudge on the pedal, or bask in comfort while the furnace quietly heats the home--think about the distant consequence of that easy energy--the land wounded by extraction, the distant lives disrupted by or lost to radicalized weather and rising seas. Awareness of the way injustice is woven into what seems like normal, civilized life is our ticket to a deeper understanding of what it was like to live in the early 1800s, when many people may have been troubled by slavery, but also found it served their interest too much to demand change. The fine-grained rendering of the past by the Slavery in Princeton project helps make more vivid our current predicament.

There is a cultural tendency to put malefactors front and center in the news, in political comedy, and in movies. Though distasteful, the malefactors also satisfy in a peculiar way, as long as they are the "Other", whether from a distant era or members of the other political party. They satisfy in that we the audience come out looking better by comparison. Whether our ancestors were slaves or free, or both, we rightly feel disgust at the news that slaves were once sold on Nassau Street. The Slavery in Princeton project will not fully realize its potential, however, unless we ask ourselves if the disgust we feel now will, decades or a century from now, be felt towards us. Only then can the urgency of our moment in history be made clear. It's time to forge an economy based on ethical energy, that respects people and planet, present and future.

Here are some of the sources that offered insight into then and now:

For those trying to reduce consumption of fossil fuels, the closest counterparts in antebellum America were the Quakers, described in this article, Boycotting Goods Produced by Slaves. John Woolman, whose house has been preserved, was one of the leaders who influenced Quakers to take a stronger stand against slavery in the mid 1800s.

12 Years a Slave is a powerful movie worth seeing. It's one of those movies where you emerge from the theater shaken, with perceptions of the world dramatically changed. I wrote about it here.

Why Non-Slaveholding Southerners Fought gives a fascinating description of attitudes in the South leading up to the Civil War.

The New Abolitionism compares slavery and fossil fuel use, with a particularly useful discussion of stranded assets.

Rationalization, whether of slavery back then or fossil fuel use now, is alive and well. Here's an example from the current U.S. energy secretary.

This from Princeton Bicycle and Pedestrian Advisory Committee:


Great news! On November 2, Princeton's Planning Board is to consider formally incorporating bicycle and pedestrian mobility into Princeton's transportation plan. More details on this issue are in Nat Bottigheimer's clear and informative article in Planet Princeton.

This is a huge development for sustainable transportation in Princeton, and it would be great if we come to the meeting in large numbers to show our support. Bring your friends! Bring your kids! (Tell them that it's a chance to see democracy in action; also that our town hall has good WiFi).

The hearing is on Thursday, November 2, 7.30-9pm in the main meeting room of the Municipal Complex on 400 Witherspoon Street.
You can download and preview the proposed circulation element here.
Posted by Steve Hiltner No comments: 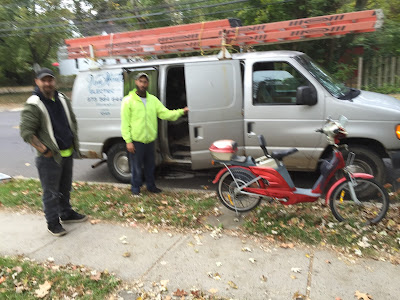 Less than a half hour after putting an electric bike out on the curb, I heard a knock on the door. A man with a long beard wanted to make sure it was free for the taking. Years ago, I had acquired it under similar circumstances, motivated by a vision of tooling around town, powered by solar energy. The envisioned repair and reuse had languished, however, for lack of an understanding of all things electrical. The bike should be in good hands now, though. These guys are real electricians, and just happened to have room in their truck.
Posted by Steve Hiltner No comments: