The photo below speaks volumes about recycling, or lack thereof, at Princeton High School. I'm a fan of the school. It's been a good place for my daughters. Most of the teachers are excellent. But there's an opportunity being wasted when it comes to teaching kids basic citizenship skills for living on the planet. There was a time when Princeton's public schools, with the exception of Riverside Elementary, were recycling in name only. Based on my conversations with the truck drivers who pick up recyclables, many schools in NJ were and probably still are in a similar state. Almost ten years ago, I worked with facilities staff, teachers and custodians to develop a protocol to improve recycling in Princeton's public schools. We got the elementary schools recycling again, but JW Middleschool and PHS proved much harder, since students don't spend all day in a single classroom. It seemed to me that the administrators had made recycling a very low priority. There was no signal coming from the top that recycling matters. Recycling only works if everyone--students, teachers, custodians and other staff--do their part. Only if there's a clear and ongoing signal coming from the top will the system work.

My point, which didn't seem to sink in at the time, was that school is the place to develop lifelong habits, and any effort to engrain recycling habits would have lasting benefits. Each student's participation matters, since contamination of recyclables with trash can mean the whole bag ends up in the trash dumpster out back.

This year, a teacher and some students made a visual statement about the state of recycling at PHS. In the cage on the left are all the containers thrown out in an average week. A much smaller portion, on the right, actually get recycled. 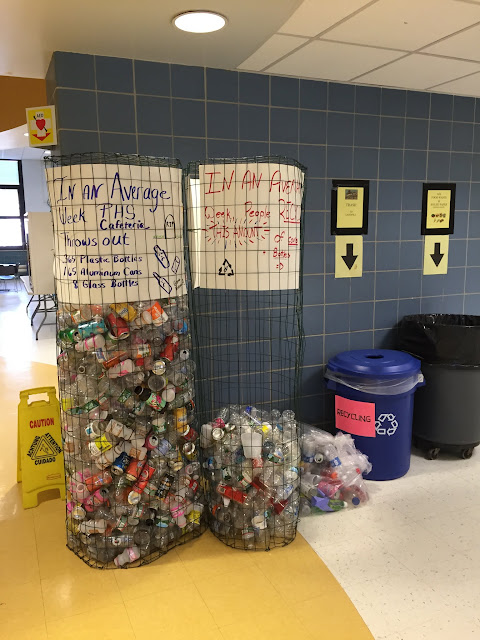 The school has decent receptacles--contrasting in shape, color and opening, and paired so that students don't have to walk extra distance to reach the right receptacle. But that's clearly not enough. 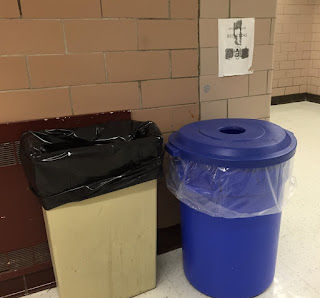 One aspect of recycling is that you can tell how a building is doing simply by checking the ratio of recycling and trash dumpsters. In the back of the school, the ratio is 1:3. Not exactly great. 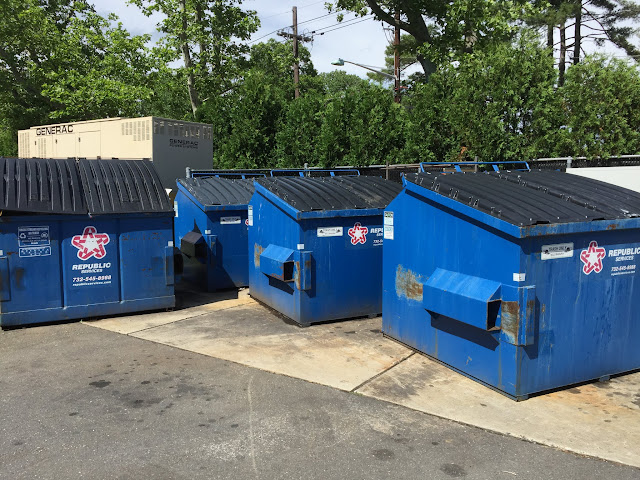 What was coming is now here, at least for a few more days. An email from Sustainable Princeton arrived yesterday with news of the Tiny House on Wheels. A movie about these hyper-small structures was shown years back at the Princeton Environmental Film Festival, and there are movies online. The tiny house movement is relevant to Princeton if we wish there to be an affordable way for people of lesser means to live in town. Here's the text from the SP email:

Make sure to check out the "Tiny House on Wheels" before it leavesPrinceton! Grace and Corbett Lunsford specialize in building forensics and are traveling around the country in their tiny house that doubles as a tiny lab to demonstrate home performance. They are here in Princeton this week to educate homeowners how not to waste money on home improvements. Owning and maintaining a home can be an expensive and frustrating experience. However, with a little knowledge about home performance, you can ensure that your hard-earned money is spent on improvements that will get you the comfort, air quality and energy efficiency you expect.

Stop by the parking lot of the Unitarian Universalist Congregation of Princeton on Cherry Hill Rd. between 5 and 6 p.m. until this Friday for a tour. They are also hosting a free Home Performance Crash Course tomorrow from 6-8 p.m. and againon Saturday from 9-11 a.m.

The Tiny House on Wheels' full schedule can be found here.

The other day, I went to a block party in a part of town where we lived when we first moved to Princeton. With a cool gentle breeze, beer in hand, good food and company, I had this desire to talk of pleasurable things. I've noticed that conversations tend to gravitate towards problem solving, which is understandable, given all the problems in the world, but I think the habit has become too strong. There was a time when people spent their days working at some positive task while being serenaded by the beauty and order of a classical music station. Now, public radio has one talk show after another, analyzing this or that aspect of some societal dysfunction in a never ending quest for solutions. We are problem solvers, after all, though our other role as problem creators seems at times to be even more impressive.

So I was sitting there feeling all this pleasure, wanting to speak of things that would complement that mood, only to hear the words "Zika virus" forming in my brain and slipping out of my mouth. Once they were out, there was no turning back. The conversation raced full gear into problem solving. Turns out my former neighbors have for years suffered unusually high levels of backyard mosquitoes. Why would this be, given their position on high ground, so close to Princeton's backbone, the ridge road called Nassau Street? I pointed out that, in my experience, springs can sometimes be found just a few hundred feet down from a ridge, for reasons unknown. That fit with one neighbor's observation that something is making his sump pump work overtime. It wasn't clear how mosquitoes could breed in wet ground, however, since they need pools of water for that.

I suggested that everyone check their gutters, since roof gutters so easily get blocked by leaves in the fall, or flowers and seeds in the spring. A third possibility, though not at all limited to one neighborhood, is that our green and yellow recycling buckets may be contributing. Many people leave these outside, and since they lack covers, there's nothing stopping the rain from accumulating in cups and jars, where mosquitoes could then breed.

This article in the Princeton Packet says that the virus is spread by Aedes mosquitoes. Turns out there are two kinds in the U.S., both introduced from other continents. The yellow fever mosquito, Aedes aegypti, comes from Africa. The Asian tiger mosquito, Aedes albopictus, was likely introduced to the U.S. in 1985 in a shipment of old tires, and worked its way north to Princeton some years ago. Though it's less likely to transmit the disease than the yellow fever mosquito, it's active during the day, making it a particular nuisance. It also breeds well in small containers, like those found in a recycling bin. A google search found recyclables mentioned as potential breeding sites, e.g. here and here.

One could test this theory, that uncovered recycling bins are increasing mosquito populations, by putting water in some jars and seeing if the mosquitoes use them. Since the mosquitoes prefer dirty water, a gradient from dirty to clean water could be put in the jars to see if that's a factor.

The curbside recycling program is run by Mercer County, not the town of Princeton. The county has a centralized program that towns can buy into if they want. Though the green and yellow buckets have served well, they do have shortcomings regardless of whether they breed mosquitoes. They are small, tip over easily, roll into the streets, and tend to overflow after two weeks of accumulation. The collection crews can't help but spill some as they carry the buckets to the trucks, and the lack of covers can make any paper wet and heavy.

On a windy recycling day, the overflowing contents blow all over the streets. My observations suggest this is the biggest contributor to plastic and paper litter in Princeton, most of which ends up in Carnegie Lake via the storm drains. Any Clean Streets initiative that ignores the accidental litter of recycling day is missing a big piece of the puzzle.

If and when the recycling buckets ever get replaced, it will likely be with large rollcarts with covers and wheels for easy transport to the curb. Some places in Princeton, e.g. Spruce Circle, have already started shifting to rollcarts, though these are small and not of very good quality.

Any contribution recycling buckets make to breeding mosquitoes could sway opinion in a way that all the other deficiencies do not.

Now, to get back to that beer and a gentle breeze...
Posted by Steve Hiltner No comments:

Harry's Brook and the Tale of Two Parking Lots 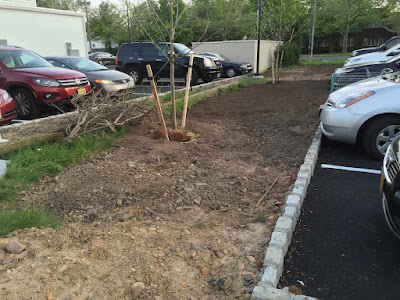 Though the parking lot at the Princeton Shopping Center will surely look and function much better after its renovation is complete, there was a missed opportunity in terms of reducing how much polluted runoff the parking lot generates. (Update, 8/20/16): Not completely lost. See more recent post.) This is something the aquatic life in Harry's Brook notices, but we don't. We perceive a rain as cleansing. But the brook, one tributary of which begins near the shopping center and flows down to Carnegie Lake, is on the receiving end of that film of pollutants that cars shed wherever they go.

Though reconfigured, the islands of turf and trees at the shopping center will have the same design they had in the past, convex and higher than the surrounding pavement. They will shed water rather than receive it. A more stream-friendly approach is to make the islands concave and lower than the pavement, so they can receive both the quantity and tainted quality of runoff from the pavement. The vegetation and soil can then absorb some of the runoff and filter out some of the pollutants before the stormwater enters the stream. The result is less flashy floods and cooler, cleaner water entering the brook.

One example of this concave shape can be found at Stone Hill Church, up on Bunn Drive. Another is near the shopping center at Westminster Choir College's parking lot. The photo below, taken during construction years back at Westminster, shows the wavy curb where runoff enters on the left, and the drains that take any excess runoff the swale can't handle. The reason Westminster used a more stream-friendly approach? Because their parking lot was an addition, they had to adhere to the latest regulations, which require more sensitivity to the watershed. The shopping center was renovating an existing parking lot, rather than adding additional impervious surface, so the more recent, creek-friendly regulations didn't apply. 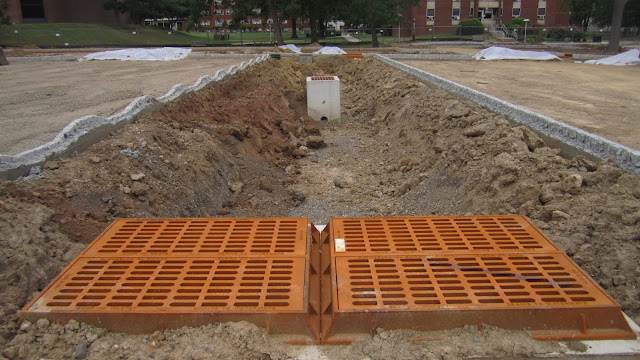 The shopping center renovation would have been an opportunity to reduce harmful stormwater impacts on Harry's Brook. That didn't happen, most likely because developers tend to do only what the government requires, and nothing more.

Paint your way to a better world at an upcoming fundraiser for the Princeton School Garden Cooperative. More details below, and at this link. It's open to adults and children.

Join us at Pinot's Palette Princeton on Wednesday, June 15th at 7pm, and bloom your own "Kitchen Radishes" with this two hour painting class. Reserve your canvas for $45, and proceeds go directly to the Princeton School Garden Cooperative, which fosters garden-based education in the classroom, cafeteria and community. We will supply some snacks and wine courtesy of our vendors, but feel free to BYOB it up!


Related, the Princeton Farmers Market, open Thursdays at Hinds Plaza, will be receiving an award at town council's June 13 meeting.