Here's an example of hundreds of seemingly insignificant individual actions leading collectively to a big mess. This is small scale stuff, marring the view outside a cafe, but the same dynamic is at work in sealing the fate of our planet.

This overflow runs counter to other uses of paper in the digital age. Newspapers grow scarce, and we're often reminded not to print things out if we don't need to. There's talk of going paperless in the office. But when it comes to food and drinks, the use of paper is burgeoning. Trash receptacles overflow, in this case spreading over towards the relatively empty receptacle for recyclables. Paper feels ecological. It's from nature, unlike most plastics. It won't drift out to the ocean and work mischief with the food chain. We hear that plastics won't decompose in landfills, but sequestering the plastic's carbon underground can be a good thing. If paper decomposes in a landfill, it produces methane, some of which will escape and feed climate change.

For anyone who reads the fine print on the blue lid of the recycling receptacle here, it includes paper, which means most of the paper in this photo, separated from the food, could actually be stuffed in the recycling rather than the trash. Either people have really bad aim, or they didn't get the memo. 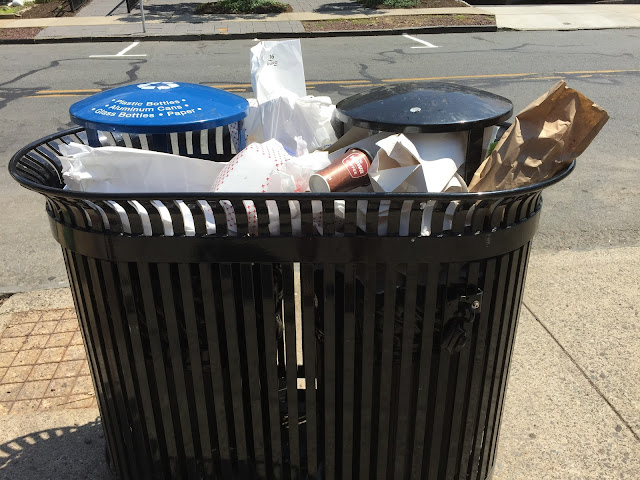 A surprisingly rare sight in front of our house is this trash can. Every month or so, if that, and on the small side--32 gallon capacity. Why it's so slow to fill is nothing we've kept track of, but likely has to do with a habit of thought that everything has a place--usually some place other than the trash can. By the time most items have landed in the recycling bin, or the kitchen counter compost bucket, or the plastic bag full of plastic bags to head to McCaffery's, or has been put out on the curb for reuse or scrap, there just isn't much left.

This blog post might more appropriately have a photo not of the trash can but of an empty, clean curb, for it's absence from the curb most weeks is what's most worthy of note. A lot of environmentalism has to do with seeing the significance in what is nowhere to be seen. 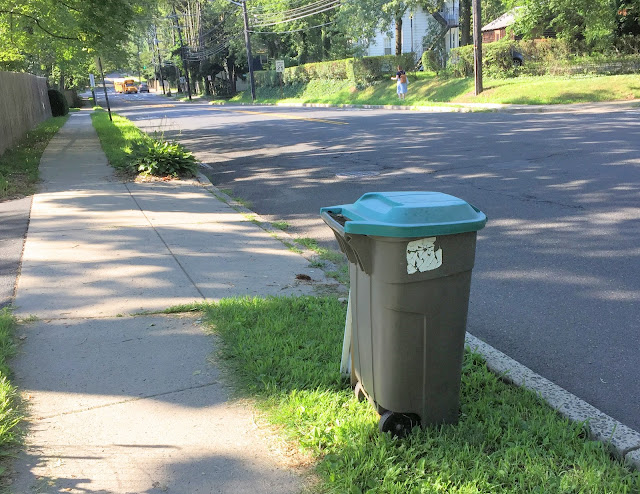