The Half Mast Flag 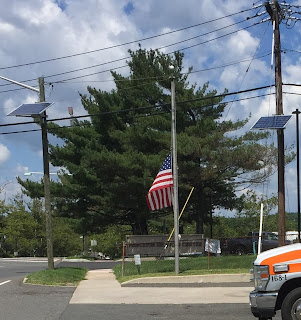 Sometimes, the American flag hoisted in front of the Princeton First Aid and Rescue Squad will fly at half mast. I assume it's to honor the memory of a volunteer who lost his or her life in the line of duty. This happens fairly frequently, though, and since this is the most visible American flag on our side of town, catching the eye as we pull into the Shopping Center, it can give a sense that the nation is repeatedly in mourning. A few weeks ago, the flag was remaining at half mast for a number of days running, and I finally stopped by to ask for some background. Turned out to be in honor of an officer who had lost his life somewhere else in the country. 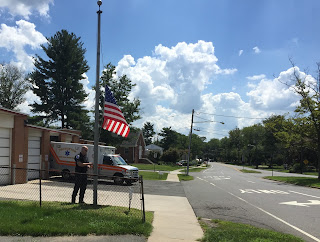 Though I didn't express any opinion, they raised the flag back up within the hour, as if they'd forgotten how long it had been at half mast.

This raises the question of how to rightly honor those who risk their lives to protect us, without it beginning to seem, particularly in an election year, like a political statement that the nation is on the wrong course. 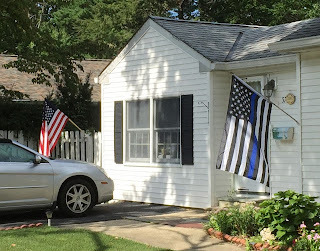 Might some other flag be flown at half mast for those times of mourning?

A few days later, I stopped by a friend's house and noticed his neighbor was flying the Thin Blue Line, which, according to Wikipedia, "is a symbol used by law enforcement, originating in the United Kingdom but now prevalent in the United States and Canada to commemorate fallen and to show support for the living law enforcement officers and to symbolize the relationship of law enforcement in the community as the protectors of fellow civilians from criminal elements. It is an analogy to the term Thin Red Line."

Flying this flag, or something like it that included rescue squads, either on its own pole or beneath the American flag, would make more clear what and who is being mourned. 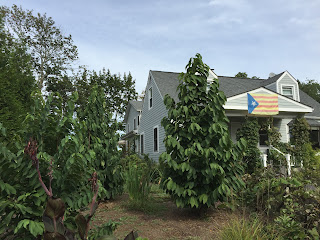 As a bit of an aside, I later noticed a flag just down the street, relevant here because it, too, is a variation on a theme. Turns out it's La Senyera Estelada, an unofficial flag generally waved in Barcelona and elsewhere by supporters of Catalonia's independence from Spain. It's modeled after the flags of Puerto Rico and Cuba, which gained independence from Spain in 1898 and 1902 respectively. 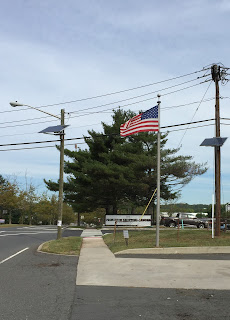 Two worthy goals: An American flag more consistently flying high, and honoring those who have given their lives. Without too much trouble, we could have both.

The Joys of Re-use 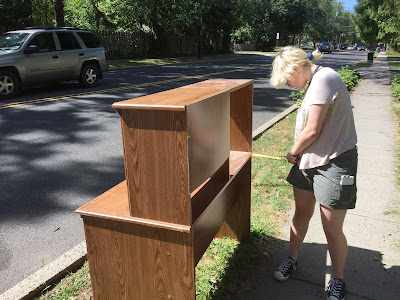 I had found this desk next to a dumpster in the neighborhood and knew it would soon be headed for the landfill if Mr. Sustainable didn't come to the rescue. Some careful maneuvering of its significant mass onto the ol' pickup safely transported it to our Kurbside Kmart location one block away on busy Harrison Street, where it sat, curiously unclaimed for several days, despite being in good condition. With people moving in to town, it seemed perfect timing.

As the furniture lingered in our front yard, I had begun to wonder about the aesthetics and practicality of this passion for re-use, when a knock came at the door. A young woman asked, with a tone of disbelief, if I was really giving away that fine desk. I said yes, and her eyes lit up. She and her mother had been passing by on their way home to a distant town, and decided it was perfect for their needs.

The next challenge was to fit it in their little hatchback. Part of the fun of repair and re-use is finding out how things work. Deciding which tools to use, finding all the hidden screws, making all the pieces fit in the car--solving all these physical puzzles has got to be good for the brain. This is basic resourcefulness in the service of saving resources. And serendipity, when it happens to oneself or others, feeds the soul and spares the landfill.
Posted by Steve Hiltner No comments: