Living a Republican Reality in a Democratic Town

(Note: written way back in pre-Coronavirus December)
Among the rewards of reading a real newspaper are those times when the articles and op-eds resonate one with another, creating a memorable portrait of our times. The Dec. 6 Princeton Packet had that resonance, giving a vivid portrait of how out of sync our journalistic conventions and culture are with the primary threat to a shared future.

In the Town Forum, the Packet consistently features environmental themes. Michele Byers captures the richness and beauty of nature, while Huck Fairman sounds the alarm about the climate crisis that is steadily destabilizing nature and civilization. Though Huck often tries mightily to highlight any positive developments he can find, his column on Dec. 6 is decidedly bleak in its depiction of the disconnect between urgency and action.

I live on a busy street in Princeton, and though it is a town dominated by the Democratic Party, the world I wake up to every day reflects a stubborn Republican denial of both the climate problem and its solution. Princeton is a town that recognizes that the burning of fossil fuels poses an existential threat, yet PSEG spent the summer digging up the streets to lay bigger pipes to pump more natural gas into our homes, while above ground the din of the internal combustion engine has only grown louder.

Similarly, though the Packet's Town Forum page reflects a newspaper aimed at a liberal audience, the rest of the paper's coverage largely denies the reality of a "now or never" urgency for action on the global warming emissions built into our lifestyles. Articles about lead contamination and vaping reflect how strong is our desire to protect our children's insides, even as we continue to radically alter that thin layer of atmosphere they will long inhabit after we're gone.

The front page article on Dec. 6 details all the additional school security and air conditioning being installed in our schools. Again, our children's security and comfort are given high priority, yet conspicuously missing is the question of how to power the air conditioners while miraculously meeting Princeton's stated goal to dramatically reduce dependence on fossil fuels.

The Republican denial that permeates our largely Democratic community is further reflected in the "On the Road" column, which provides reviews of the latest automobiles. This is a throwback to newspapers I would read in the 1980s, before it was widely understood how big a threat the internal combustion engine poses to our future. The car featured in the Dec. 6 column gets 31 mpg on the highway--a gas consumption described as "not too shabby." My similarly mid-sized 1986 Toyota Camry got 40 mpg on road trips--more evidence that, after thirty years of understanding the threat, we continue to move backwards.

Completing the newspaper's portrait of our times was an obituary for a 96 year old veteran who like so many risked his life to help defeat totalitarianism in World War II. His role in that collective accomplishment filled him with pride for the rest of his long life. We praise his sacrifice, and call him a member of "the Greatest Generation." That term unfortunately suggests that our best days as a nation lie in the past, even as the climate crisis begs for collective action on a similar scale that would be every bit as heroic and rewarding. As we, on the front lines of the climate crisis, use our collective power to unintentionally create problems rather than intentionally solve them, we are deprived of the sort of pride and sense of accomplishment he deservedly felt.

While young climate activist Greta Thunberg was Time Magazine's "Person of the Year," carbon dioxide is the Molecule of the Century. Invisible, odorless, seemingly benign, it is a powerful player in our bodies and in nature's body all around us. Though carbon dioxide is essential to the functioning of our bodies and the planet, too much or too little becomes lethal. Its increasing concentration in the air and sea will likely determine our fate. Environmentalism tends to label chemicals as either good or bad, but our greatest threat comes from too much of a good thing. One statistic rarely mentioned in the news is that our combustion of underground fuels has increased the concentration of carbon dioxide in the earth's atmosphere by nearly 50%, a radical change in chemistry that our own bloodstreams could not survive.

Climate denial is a spectrum disorder. Nearly all of us to varying degrees shut out the reality of what's at stake so that we can fit in and get through the day. Greta's lack of denial stems in part from another spectrum "disorder" -- the aspergers syndrome that makes her incapable of distraction and conformity.

Parts of the Princeton Packet admirably call attention to the grave risks embedded in the status quo, while other parts continue on as if those risks don't exist. The contrasts in the newspaper reflect the disconnect all around us, as we show deep caring for our children while collectively sabotaging the world they will inherit.
Posted by Steve Hiltner No comments: 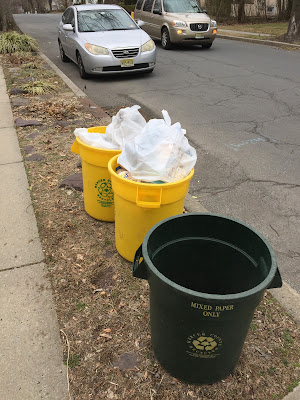 It's still winter, yet change is in the air. On recycle day this past Monday, some bins were emptied while others were left untouched by the collection crew. Why? Because Mercer County, which administers Princeton's curbside recycling program, has begun enforcing its ban on various items it deems unrecyclable.

This caught a lot of homeowners by surprise, particularly those who habitually put their recyclables in plastic bags. The lack of enforcement in the past had led to widespread indifference by homeowners, who in addition to flouting the ban on plastic bags would leave at the curb unflattened boxes full of styrofoam, mercury-containing fluorescent lightbulbs, stuffed animals, whatever--all of which would until now dependably disappear into the maw of the recycling trucks.

There is some pleasure in seeing long-ignored rules finally being enforced, but the underlying message homeowners have long been sending is that they want their packaging to be recyclable. This is where the economy and an anti-regulatory mentality have let us down.

Capitalism has some positive traits, but it places emphasis on increasing consumption. To that end, marketing and engineering creativity is focused on designing packaging that will lure the consumer to buy the product. Once the purchase has been made, capitalism thinks its job done, and leaves it to government and the individual to deal with the resulting mess of packaging and the consumed product. That's the unacknowledged socialist (for lack of a better word) side of our economy, where the private profit of consumption leaves behind a shared collective burden of disposal.

Why, in this day and age, 50 years after the first Earthday, are manufacturers allowed to use an infinite variety of packaging without consideration for what can plausibly be recycled, composted, or safely burned for energy?

Such contradictions led me some years back to organize a visit to the recycling facility that sorts out our mixed recyclables. At the time, and likely still, the destination for our curbside recyclables was the Colgate Paper company, which despite its name accepts a broad range of recyclables. Adding to recycling's contradictions, the company accepts plastics #1-7, but Mercer County has long banned plastics #3-7 from our recycling stream. Over the years, I've made follow-up phone calls to the company, asking what materials really mess with their machinery or otherwise create inconvenience. The only item they would mention was long metal pipes, which you could imagine doing major mischief if they got caught in the myriad moving parts in separating machinery. They did say that plastics #3-7 often require stockpiling for long periods before a market can be found, but would not admit to having to haul non-recyclables to the landfill.

Why the contradiction between Mercer County's rules and those of the separating plant? My guess is that the plant offers to take a broader range of materials in order to serve as many businesses and governments in the area as possible, even though it may not wish to receive the more marginal materials.

Though the rules, and the stories told in an effort to motivate people to follow them, have their share of contradictions, enforcement is the most dependable form of education, since everyone--not only those who care--will suddenly need to follow the rules or deal with an unemptied bin at the end of recycling day. Education happens when there are consequences for behavior.

If the enforcement continues, we will no longer be able to dump on the collection crews teddy bears, lightbulbs, and whatever else we wish were recyclable. But capitalism's dumping on the public sector will continue. As long as they can get away with it, manufacturers will continue to lure us into buying a baffling complexity of materials that frustrate our desire to recycle and place an ever expanding burden on our governments and nature.
Posted by Steve Hiltner No comments: