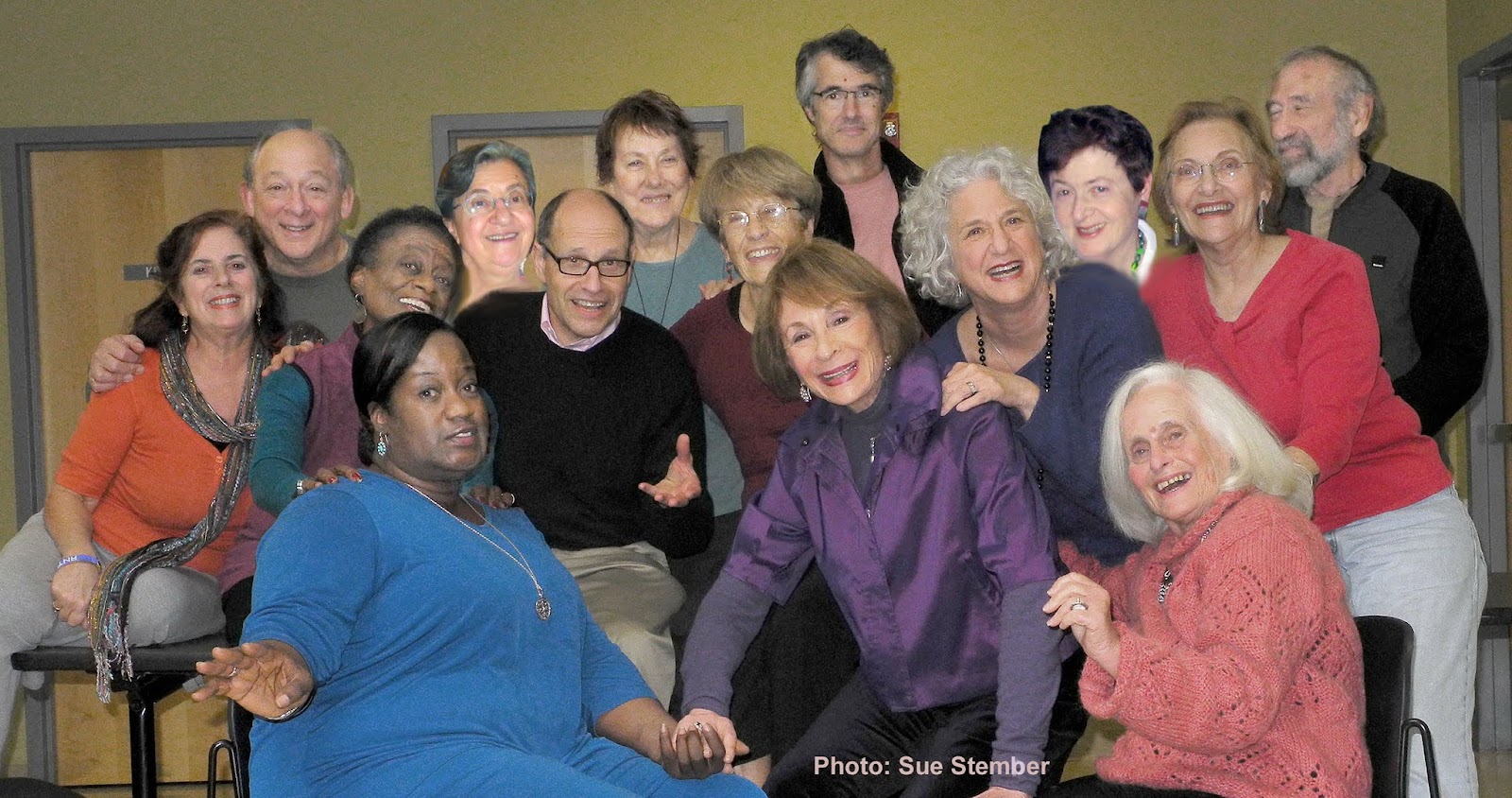 Our OnStage community theater group debuts a new show tonight and tomorrow afternoon at Passage Theatre in Trenton. After not paying too much attention to theater for most of my life, I joined this group two years ago, and have found the process of taking on another character to be revelatory. Our director, Adam Immerwahr of McCarter Theater, is first rate.


Description:
Drawn from interviews with area residents, “Live With That” examines decisions that have shaped and reshaped lives–everything from starting college at age 40, to moving a parent into a nursing home, to dealing with a daughter’s less-than-ideal high school date.

Tickets purchased online or at the door are $15. Purchase your tickets AT THIS LINK.

Passage Theatre is just off Route 1. Take the Market Street exit to the right, turn right on Stockton, then left at the light on Front Street. The Theatre's a block or two down on the left. Patrolled on-street parking is available on S. Montgomery St, Front Street along the park, and in the Artworks parking lot.
Posted by Steve Hiltner No comments:


Innovative Energy Solutions
Thursday, March 27, 8:30 am
Princeton Public Library
Please join NRG and local entrepreneurs to explore the clean tech journey – from the first seeds of innovation to development of full-scale enterprises in the energy sector:

We hope you will be inspired and amazed by the hopeful inventions being developed here in Princeton.
Share your interests while enjoying a free, sustainable breakfast provided by a local eatery.
Sponsored by Sustainable Princeton and Princeton Public Library
Posted by Steve Hiltner No comments:

Weather to Bother and Bewilder

(sung to the melody of Bewitched, Bothered, and Bewildered, by Rodgers and Hart)

It's cold again,
Late March! Again!
There's even a forecast of snow again,
Bewitched, bothered, and bewildered am I.

Got some sleep
Cold's good for sleep
The cold that won't let winter fall asleep,
Bewitched, bothered, and bewildered am I.

Tell me that climate's cooling.
That's the least they could do.
Now I hear that it's weirding
Because of what we do.

A pill it is.
This chill it is.
The jet stream gets drunken until it is
Bewitched, bothered and bewildered
Like me.


Some background:
(The "drunken jet stream" is a description of the more exaggerated, less predictable behavior of the jet stream that used to do better at keeping arctic air in the arctic. As I understand it, the jet stream--the powerful winds that blow west to east above the U.S.--is driven by the difference in temperature between polar and more equatorial air masses. It has become weaker as the arctic heats up faster than the rest of the planet. As it weakens and slows, the jet stream meanders more, allowing arctic air to bulge down into the mainland U.S. and remain for longer periods. It's a bit like a very, very large hernia.

If the arctic air is down here, that means it's not somewhere else. As an example of how this drunken jet stream is turning temperatures upside down, the high temperature today in Princeton, NJ and in Anchorage, Alaska, is similar, even though Anchorage would normally be fifteen degrees cooler than NJ this time of year, according to tables at weather.com. )
Posted by Steve Hiltner No comments: 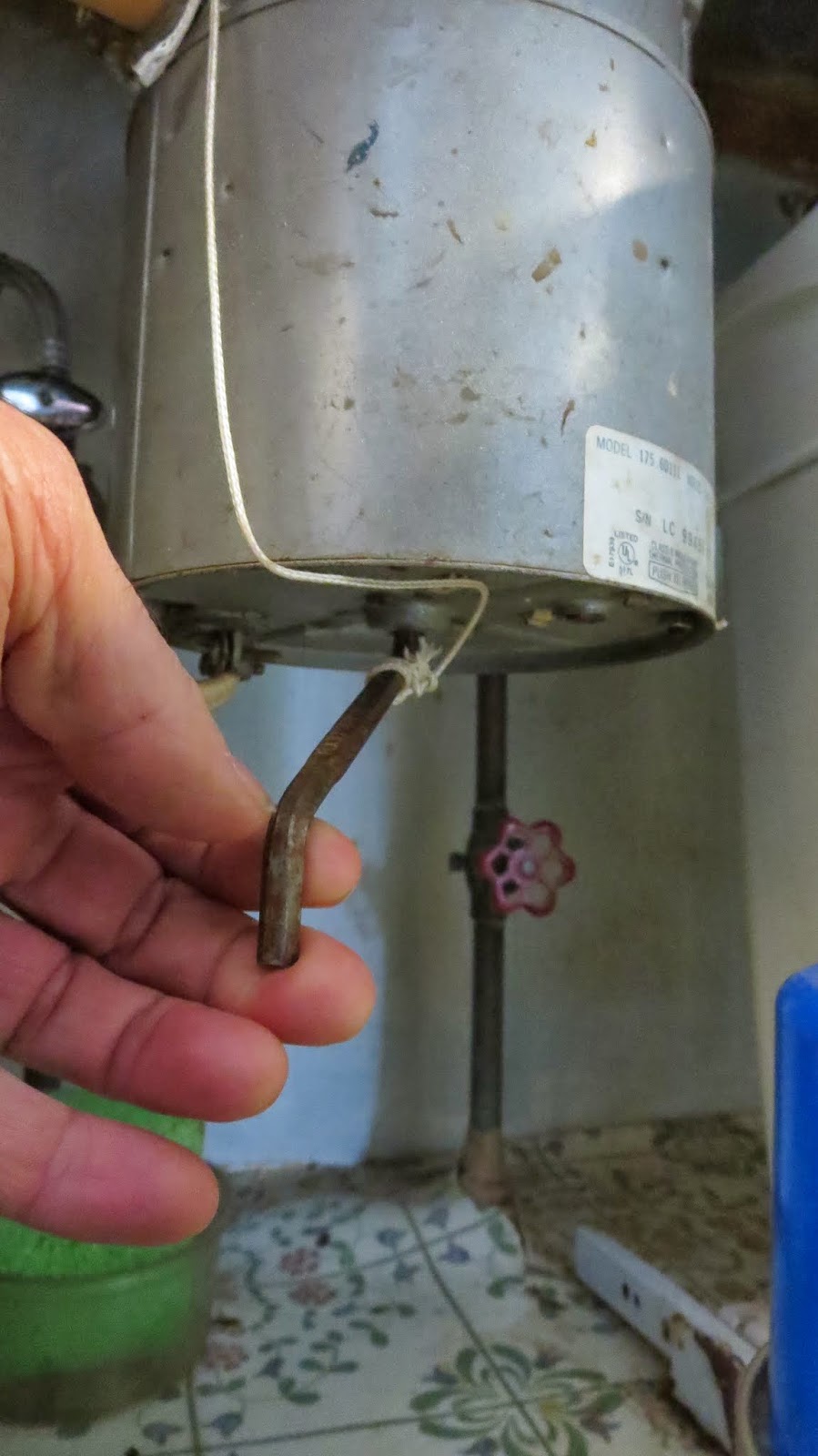 And now for another episode of  "Don't try this at home" Home Repair. Some months ago--we will not say exactly how many--the garbage disposal under the sink stopped working. Some, faced with a non-functioning garbage disposal, would yield to an impulse to replace it. The resident repairman chose instead to pursue what some might interpret, and probably did interpret, as an inexplicably extended period of procrastination. During this time, we (first person singular form of "we") were forced to resort to periodically giving the disposal a quick manual turn from below whenever the water started backing up in the sink, replicating in the kitchen sink a level of functionality comparable to the way the U.S. Congress has been run for many years now. For the sink, if not for Congress, this approach worked unexpectedly well, feeding the procrastination. It helped that most food scraps end up in the compost bucket rather than the sink.

A generous reading of the resident repairman's inaction would be that he was allowing the garbage disposal an opportunity to repair itself, as had occurred with some appliances in the past. He found validation for this approach when the disposal did in fact begin to work again, about a month ago, though this repaired state regrettably lasted for only a few minutes.

We may never know what finally prompted him to tackle this lingering kitchen sink enigma. Why one day and not all the others? Perhaps he was able to take a deep breath somewhere in his psyche, unlocking a previously untapped confidence that the known unknowns might not be as unknown as he had long assumed them to be.

He seized the day, or at least a moment when his daughter was in the kitchen and could call to him when he had turned the relevant circuit off down in the basement. It was also an opportunity to explain to her that the house has many different circuits, each servicing different plugs and sockets. This bit of real world education just wouldn't have happened if we had called an electrician in. 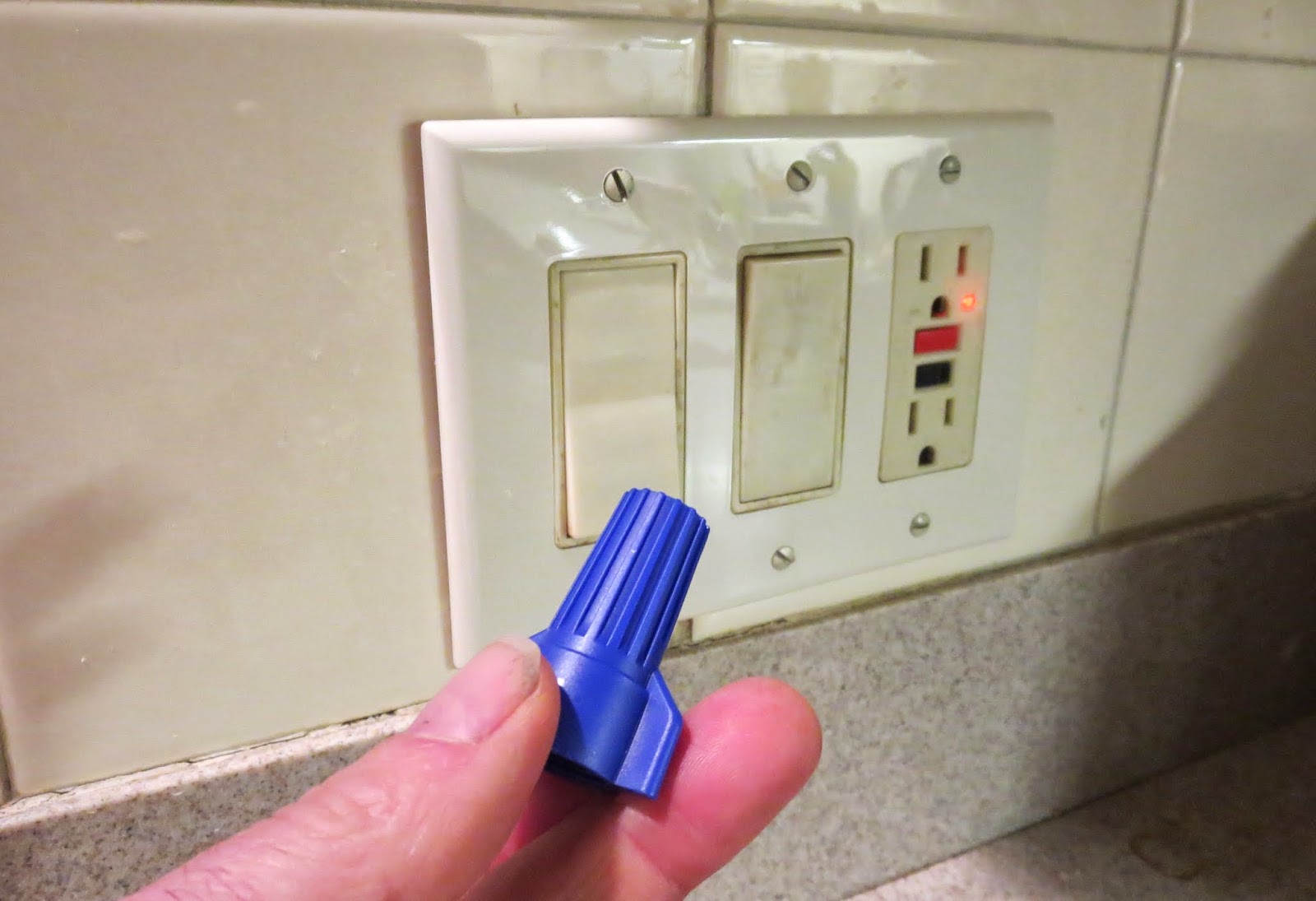 With power off, and after removing the protective plate and doing some investigation of the wiring behind the switches, involving various teasings and proddings, each of which required trips to the basement to turn the circuit on to test the result, then off again to try something else, it became clear that a wire coming from the relevant switch was loose, and that all that was needed was a larger wire connector to keep an unusually thick cluster of wires tightly clasped.

Such an oversized part, he learned by trial and error, could only be found by journeying to the deepest canyons of Big Box Retailand, several miles south. Coordinating errands so as to burn a minimum of gas and time, he found the part, installed it along with a gleaming new switch plate, and felt at last that sense of pride in achievement.

Time allotted: X months of contemplation followed by 1.5 hours of action.
Level of difficulty: Hard to fathom, but ultimately easier than expected.
Savings: Face, along with whatever a new garbage disposal might have cost.
Posted by Steve Hiltner No comments:

Climate and a Deepening Contradiction in our Lives

(An early February letter to the editor)
If the planet is warming, then why have we been the ambivalent recipients of recurrent snowstorms and the coldest January in ten years? A brief tour of the globe via internet reveals just how much of a bubble we’ve been living in here in Princeton. While we had the 8th snowiest January in 120 years of record keeping, California has been suffering through a record breaking drought. Alaska has been unusually warm. Intense use of air conditioners during a 100 degree December heatwave in Buenos Aires, Argentina led to extended power outages, which in turn led to demonstrations. Australia, too, is suffering yet another extreme heat wave.

Our unusually cold winter was brought to us in part by the warming arctic’s apparent impact on the jet stream, whose increasingly erratic behavior allowed a bulge of arctic air to settle for a prolonged period in the eastern U.S. This bit of global weirding allowed for four days of skating on Lake Carnegie. Very pleasant, but the planet continues to warm overall.

Ironically, the increasingly erratic weather in NJ and throughout the world is being caused by the very fossil fuels that deliver consistency to our daily lives. We depend on them for clearing our streets, keeping our homes comfortable and delivering us to work each day. And yet the impact of that stability is a destabilization of weather and sea levels that will only grow more radical with time.

As well-meaning, generous people, we should not stand for this deepening contradiction that continually forces us to choose between present and future, and demand of ourselves and our leaders, in Princeton and beyond, a steady and expedited squeezing of these star-crossed fuels out of our lives. 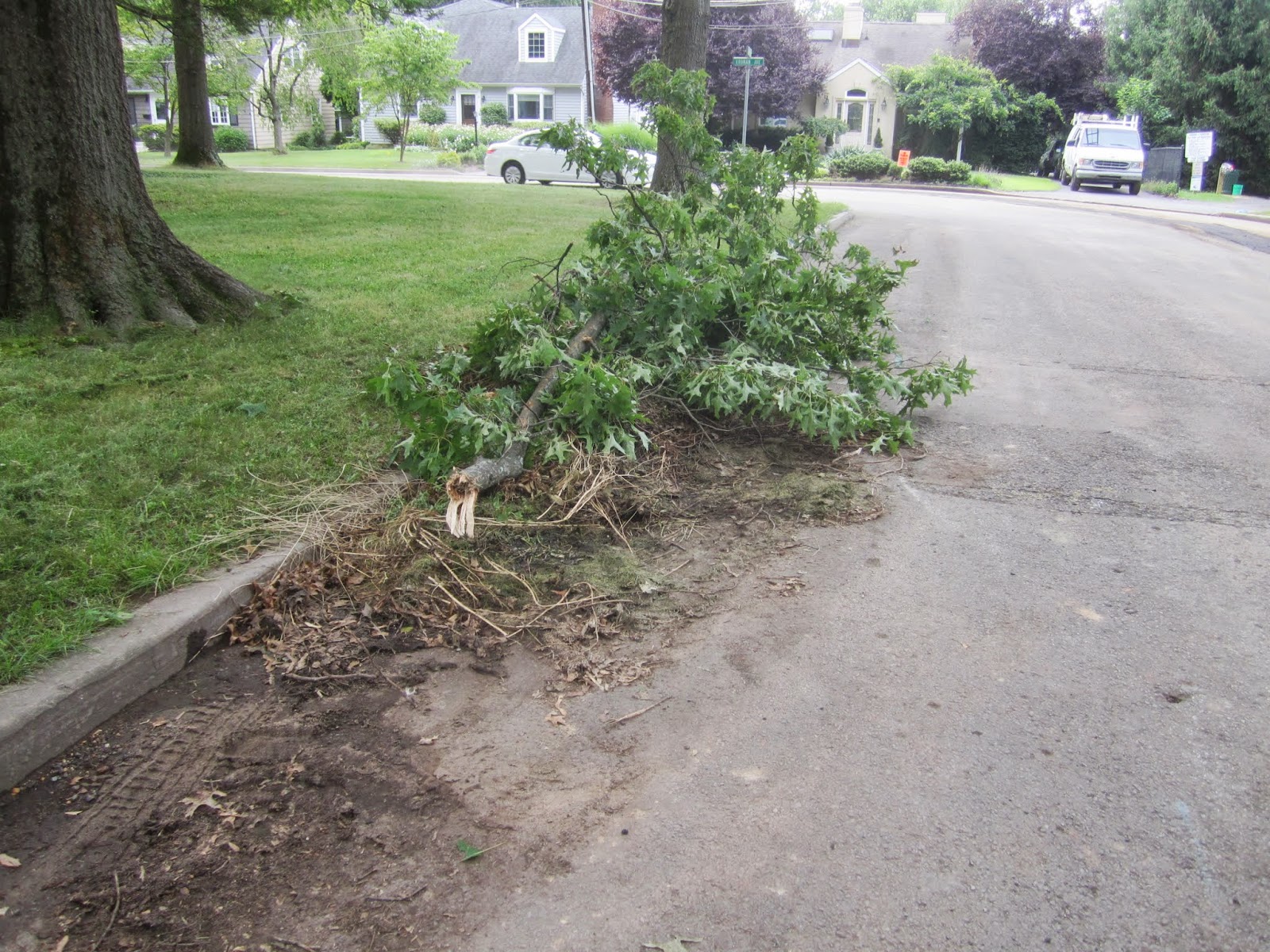 If you care about clean streets, now is the time to be trying to change policy. In spring, summer and fall, when yardwaste, leaves and brush, and even grass clippings (supposedly illegal), are being cast out loose upon the streets without concern for pickup dates or ordinance requirements, it's too late. Now, too, is when we usually forget all about what happens in summer and fall. Thus, nothing ever changes.

This year, amazingly, some residents fed up with the perpetual mess are seizing the moment, carpe diem-like, and calling for a new policy that will make our streets a source of pride, rather than a dumping ground. Below are some insights I've gained after years of fighting this battle for change: