There's pleasure in exploring where the runoff goes from your roof and your driveway, and figuring out how to use that rainwater in the landscape rather than rushing it out to the street or into your neighbor's yard. Princeton Public Library is hosting a presentation about this on Wed, October 18, at 7pm. Information below:

Science and Social Issues Come Together in "Paradise"

Update: If you missed Paradise at Passage Theatre, you can catch it at the Luna Stage in East Orange in November. Might even be accessible by train.

Some of the most moving theater I've witnessed has been at Passage Theatre in Trenton. This coming weekend's the last for a play I'm being urged to see, partly because science is in the mix. The science of romantic love, the muslim experience in America--along with the good reviews from friends, it looks like a trip to Trenton somewhere between this coming Friday and Sunday, Oct. 20-22. Go to http://passagetheatre.org/paradise/ for more information. There's a writeup at this link.


Two outsiders – a gifted Muslim-American teenager and her disgraced biology teacher – form an unlikely partnership to research first love. Science, religion, and exploitation are all fair game as both lives change forever.

The urgings from friends:


"If you go to the play at Passage this weekend, you won't be disappointed. It combines social issues with science issue, and is really well done. Passage is not allowed to have newspaper reviews--some contractual agreement--so word of mouth and blog reviews are key."

"It is first of all about the relationship between a teacher and a student and how science is done. It is also a sensitive presentation of Islam and the struggles believers face in America."

OnStage Seniors, a community project that I joined five years ago and is now based at McCarter Theater, will be performing at the Princeton Library this Sunday, October 15 at 3 p.m. See our troupe of fifteen, all over 55, do monologues and skits on this year’s theme: A-HA MOMENTS. The stories are all true, gathered from people in the greater Princeton/Trenton community about those moments of insight, big and small, funny and serious, that changed a life.

A video about the group's work of gathering stories from the communities and performing them as monologues or dialogues can be found at this link. Join us! 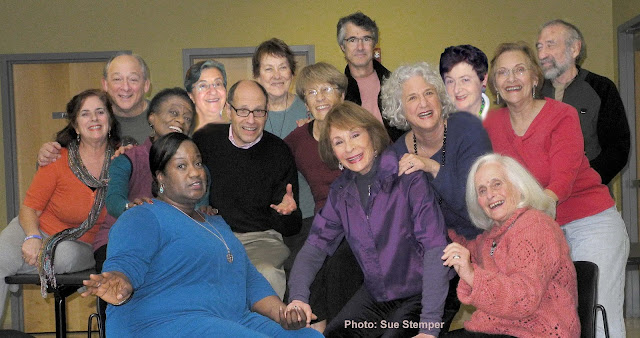 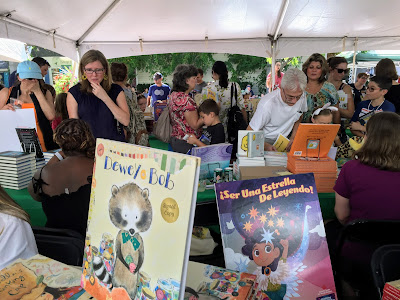 There was a wonderful energy under the big tent on Hinds Plaza. Crowds of people, long lines at the checkout counter, beloved authors signing books and having their picture taken with avid youthful readers. In a time when the internet dominates and downsizers leave bookshelves on the curb for trash day, this scene happily did not compute.

This feast of reading, celebratory and uplifting in so many ways, left one unexpected aftertaste. There were books on myriad subjects, but none on the one reality that will most determine the fate of children: climate change. One author told me that publishers think the subject is too "controversial", so that it can only be talked about indirectly.

If true, it merely adds one more layer of bondage to our lives. We are, after all, essentially forced by cultural norms and economic necessity to consume fossil fuels every day, directly or indirectly, as if some sinister force had harnessed us up to collective drag civilization towards the cliff. What to tell a child, as we read by a light powered by coal, in a house kept warm by natural gas, with an internal combustion engine ready to carry the child to school the next morning? The leaders whose responsibility it is to free us of this dependency are instead running from the problem, and creating false controversy by proclaiming that the problem doesn't exist. That false controversy, along with whatever guilt we feel for being collectively complicit, then suppresses discussion of the topic, which plays into the hands of the deniers who are getting elected by letting themselves and the voters off the hook.

A google search of "childrens books on climate change" shows that not all publishers are staying away from the subject. There are, for instance, overviews of recommended books at Parent and the Guardian. Another link recommends Jason Chin's books, such as Coral Reefs, which can be read online.

The Princeton Children's Book Festival was a joyful affair. How much more joyful it would be if we could uncouple our leadership and our lives from the collective unraveling of the future.
Posted by Steve Hiltner No comments:

The Quandary and Legacy of Overamplification

Every now and then, I have a bone to pick with Princeton University. These aren't the usual bones, e.g. University expansionism, it's impact on property taxes, or moving the Dinky station. These are smaller bones, like the stadium lights that used to be left on for long hours while the stadium was empty (which also turned out to be one of former university president Tilghman's pet peeves), or the ineffective recycling at Jadwin Gym (they improved it for awhile after my input, then reverted). All of these bones play against a background of overall gratitude. My wife is a professor there, my older daughter had a good experience as an undergrad, and I've attended many lectures open to the public. The bones are often not specific to the University, but are symptomatic of a culturally pervasive problem. The bone du post has to do with toxic sound levels.

In a world of speed limits, seat belts and emission standards, where toys, play equipment and nearly everything else we buy and consume are carefully regulated for safety, the exceptions to this safety-first mentality stand out. The most grievous is carbon emissions, upon which no constraint has been placed. The future remains unprotected and has already suffered what is now playing out as tremendous damage. 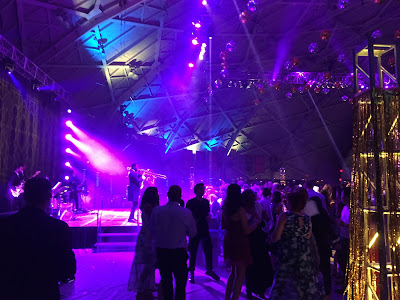 Another is decibels, whose impact on the ears, as with climate change, is unintended and often long delayed. That impact became apparent at an event this past spring (this post lingered in the draft folder): the big Princeton University graduation party known as the Senior Prom at Jadwin Gym. My daughter was part of the 2017 graduation--a meticulously planned 3 day affair that involves mass transport and accommodation of far-flung families, and a tightly scheduled series of events, all of which seems to have come off without a hitch.

Why, then, would a University that watches closely over its students not pay attention to the sound levels at the big party to which we were all invited? The cavernous gym was packed with people young and old, dancing and seated. The food was a healthy mix of humus, vegetables and fruit, but the air was toxic with thunderous sound. About one hour in, my daughter's ears "popped". Traumatized, she fled to the building's entryway, texting me with worries that her hearing had been damaged.

As someone who has played in wedding bands, I know that people who complain about loud music can be pegged as fuddy duddies trying to ruin the party. That's probably why I wore earplugs but didn't try to convince others in the family to do the same.

Regulation is often viewed negatively, but it can often lead to better products. Regulation of the producer can protect and simplify life for countless consumers. The deafening volumes in Jadwin Gym not only stymied any conversation at the tables, but by overwhelming the ears, paradoxically, the music was harder to hear with any clarity. The philosophy seems to be that people are so inhibited, so awkward at parties, that they must be pummeled by loud music in order to break down inhibitions, while providing an excuse to avoid conversation. In nightclubs, loud music is intentionally used to encourage people to drink more and talk less. But the University has no profit motive at a graduation party.

It's true that tolerance for loud sounds varies, and spectacles like a big party or a sports event are expected to be loud. But it's possible to achieve the desired intensity, sense of spectacle and celebration without destructive sound levels. In the 1980s and 90s, I struggled with this while playing in loud bands, and concluded that human nature conspires with technology, leading to volume creep. Soundmen, subjected repeatedly to loud music as part of their job, are not the best arbiters of volume. A band's volume can creep upward out of youthful exuberance. It's easier for a musician to turn up than to risk resentment and bruised egos by asking others to turn down.

These factors pushing volume upwards have no countervailing force. Audience members are very reluctant to give feedback. I remember a deafening Maynard Ferguson concert--my first but one of his last before he died--where people sat like trapped animals in their seats. A few walked out, but I was the only one to appeal to the soundman, clearly a veteran and victim of nightly decibelian overdose. He shrugged, perhaps unable to hear what I was saying. We searched for a quieter place in the auditorium, but finally had to leave.

At the least, at events where sound levels could be extreme, big bowls of foam earplugs should be displayed in the lobby. Soundmen should be required to conform to decibel limits. And any noisy establishment should be protecting its workers and customers from hearing damage. Workers in particular, such as the waiters at the Senior Prom, with longer exposure and no option to leave, are particularly at risk. Once requirements and procedures are in place, good habits are reinforced and our lives become simplified and safer. Otherwise, everyone pays. Hearing aids ain't cheap.

As with climate change, it's the delayed damage done unintentionally that slips through society's otherwise elaborate safety net. 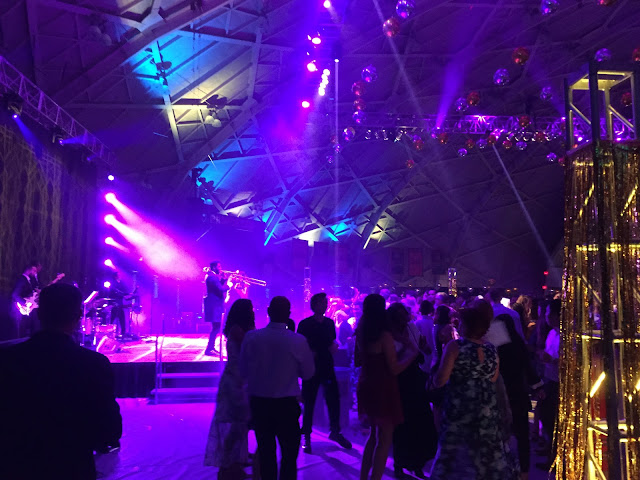