What Does It Mean To Fight Climate Change?

Below is a letter to the editor that I wrote recently, prompted by a front page headline in a local paper. In addition to its other news coverage, the Town Topics covers local sports. As an environmentalist who is also a sports fan, I sometimes think that climate change is a (very serious) game where the scoreboard is locked in the basement. Sports and the stock market generate numbers in real time for all of us to see and react to. Numbers count just as much in climate change, whether we generate them personally or collectively, but these numbers have been traditionally hidden away, depriving us of the immediate feedback we need to be part of the game.

Dear Editor,
It was good to see that fighting climate change made the front page of Town Topics a couple weeks ago [“Environmental Forum, Sustainable Princeton Fight Climate Change,” Oct. 23]. There is a common confusion, though, between talk and action. The urgency expressed at the Princeton Environmental Institute’s Environmental Forum about the need to shift rapidly away from fossil fuel dependence contrasted starkly with what we see on the streets and barren rooftops of Princeton. The most visible evidence is pointing in the wrong direction, as internal combustion vehicles swell in size and number, and PSEG digs up our streets to install new fossil fuel lines. If news of Princeton fighting climate change were real, it would tell us how many solar panels had recently been added to schools, homes, businesses, and parking lots. It would tell us how many more teachers were hired with money saved through energy conservation. We would see trees being strategically planted and trimmed to maximize their carbon absorption and minimize their conflict with solar panels.

Along with the charismatic climate scientist Stephen Pacala, the most inspiring speaker at the Environmental Forum was George Hawkins, who spoke unabashedly of how government agencies can be innovative and efficient, and how he had made Washington, D.C.’s water, and even its sewage, a source of pride. Sewage, it turns out, can heat buildings, generate electricity, and fertilize crops. Princeton’s own “biosolids,” enriched and ennobled by its many Nobel laureates, surely deserves a better fate than to be incinerated with vast doses of fossil fuel and carted off to a landfill.

Similarly, we continue to largely spurn the sunlight striking our rooftops and parking lots, and the solar energy embedded in wood and brush from our urban forest. Wood, I learned at another University event, has an energy density 17 times that of lithium ion batteries. The greatest waste is of our own resourcefulness and adaptability, which could be summoned to reduce our dependence on fossil fuels rather than to merely react to worsening disasters.

Once people become acutely aware of their own unintentional but very real contribution to the radicalization of weather, then they begin seeking ways to extract themselves and their community from that morally-challenged role as dystopia’s lackey. Turning away from fossil fuels means turning towards the nature that resides within us and all around us. What Hawkins achieved in D.C. is an opening of minds, an awakening of creativity to take advantage of all the renewable gifts of nature — physical, chemical, biological — that have long been spurned.

Fighting climate change — a collectively created problem — requires a spirit, unity of purpose, and an attention to numbers that most people only experience in sports. For example, to track our progress, our monthly utility bills would show us five-year trends in our individual and community energy and water consumption. We would be provided the same information for our schools and government. We would take pride in producing more energy and consuming less. Community progress would spur us to do even more as individuals. That’s when we’ll know we’re really fighting climate change.
Posted by Steve Hiltner No comments:

Teaching a Teenager to Ride a Bike at Westminster's "Learning Grounds"

Earlier this fall, a family from Buenos Aires came for a visit, and at some point it became known that the son, Mariano, had somehow reached the age of 16 without having learned to ride a bike. Princeton seemed the perfect place to rectify that situation, and so he and I headed over to nearby Westminster Choir College, bike in tow.

It was funny, as we walked towards Westminster on a weekend afternoon, to see kids and adults riding by on their bikes. They suddenly looked like showoffs. One realizes that what we take for granted is really a special skill--a kind of mainstreamed circus act. 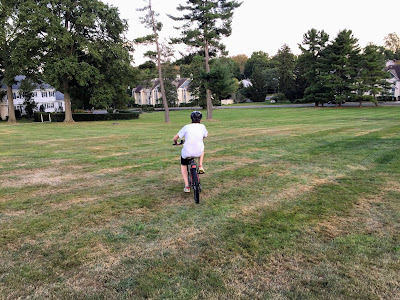 Youtube videos on how to teach an adult to ride recommend using a sidewalk or other paved surface, but my preference for passing along this life-transforming skill is a smoothly sloping lawn. My younger daughter learned on this slope at Westminster Choir College, though she had the advantage of being much younger, with less far to fall if things went awry.

Videos offer some basic tips. Set the seat low so they can use their feet like trainer wheels. Have them look ahead, not down, and get comfortable using the brakes to control speed. Don't bother with the pedals until they've gained some stability coasting with legs hanging down to the sides.

I was surprised at how satisfying it is to mentor someone, to pass a life-changing skill from one generation to the next. My role was to offer some pointers, then watch as he would head off down the slope, gaining in balance and confidence each time. 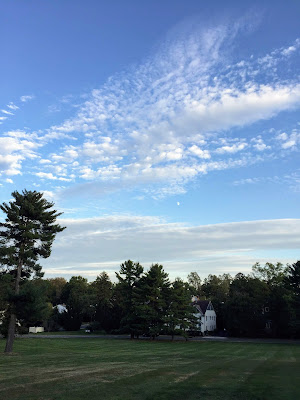 We were on "learning grounds", a special spot overseen by proud Williamson Hall, with beautiful cloud patterns against the glorious evening sky, a half moon, and then the beauty of a bicyclist-in-the-making heading off into the distance, each time more on his own, a metaphor for how the mentored gain independence and ultimately go forth into the world. In this case, Mariano will take this learning with him back to a distant home, to finally join his friends on bike rides in Buenos Aires. 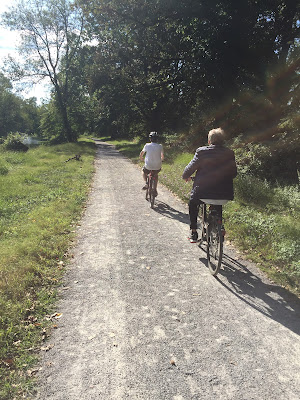 The advantages of learning to ride a bike in Princeton became even more apparent when Mariano had gained sufficient skill to head out on an expedition with his father. We took the big loop that begins with the towpath along the DR Canal, then headed back towards Princeton on the bikepath next to Quaker Road, passing the Updike Farm, Princeton Friends School, the Stonybrook Meeting House, 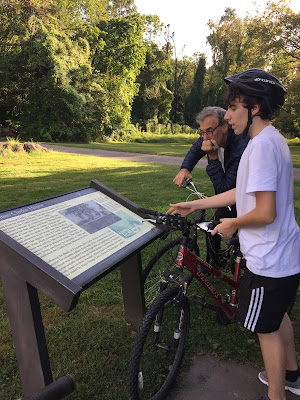 then stopped at the Princeton Battlefield, where Mariano translated the story of the great victory for his father. 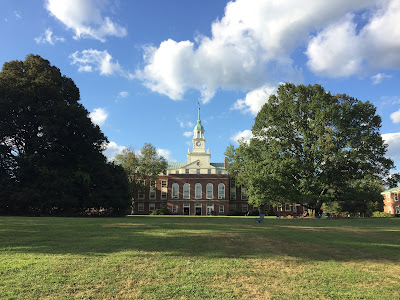 We came next to the backside of the Institute for Advanced Study, with its brainy tradition beginning with Flexner, Veblen and Einstein.

For Mariano, a new world of self-propelled mobility was opening up. For me, it was a chance to pass along the benefits of a sort of mentoring that I received briefly in my youth, on the learning grounds surrounding another great institution--Yerkes Observatory in Wisconsin, longtime home of the University of Chicago's astronomy department. There, a grad student from Canada named Mike Marlboro taught me how to kick a football. It doesn't sound like much, and certainly didn't prove to be the ticket to new worlds, but something in his unrushed manner and tone of voice made me--a little kid among intimidating adults--feel worthwhile. I would watch with amazement at the beautiful spiral and arc of the ball as he made it soar into the sky, and then he'd show me how he did it, with a patience that stretched to the stars. He may have only mentored me a few times, and yet I've felt a lifetime of gratitude for the way he stepped out of his adult world to accept me as I was, and help me along my way.

The ground, I like to think, remembers the learning that happens upon it. Like the Mercer Oak that is said to have witnessed the Battle of Princeton during the Revolutionary War, ground gains in meaning for what it witnesses. As I write this, the future of Westminster Choir College is in jeopardy, and after 120 years the University of Chicago pulled out of Yerkes Observatory, turning that proud learning grounds into what feels now more like a cemetery. A distinguished edifice overlooking expansive green--our lives are aided and ennobled by such places, and I'd like to think future lives will be, too.

Another post about mentoring Mariano, When the Body Teaches the Mind, describes the process of teaching him to chop wood.
Posted by Steve Hiltner 1 comment: