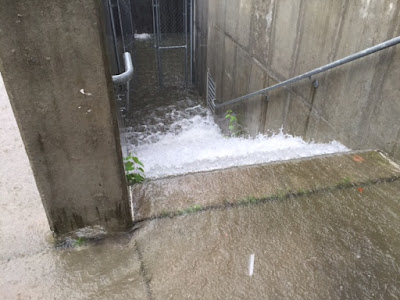 Why are thousands of gallons of water flowing into the Princeton High School basement? 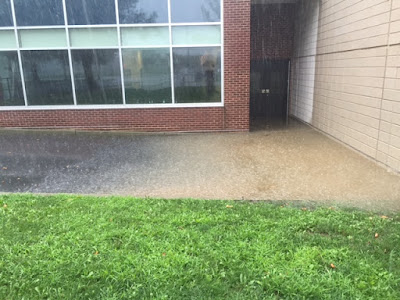 And more water flowing under the door that leads directly to the wood stage of the high school performing arts center?

The first answer is poor design by the architect, who didn't consider where stormwater would flow during prolonged downpours like the one we had today.

A big storm in 2009 damaged the wooden stage, which then had to be replaced at great expense. 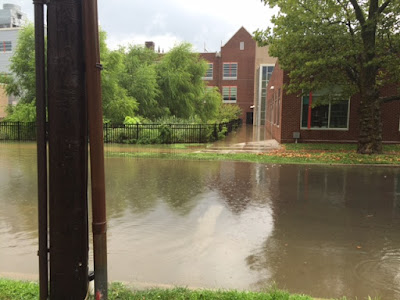 Walnut Street was one foot deep in water after torrential rains this afternoon, and because the performing arts and science wings of the school were built lower than the street, water flowed towards the school rather than away from it, causing massive flooding.

Since 2009, I have raised concern with school superintendents and facilities directors, town engineers and a few council members, on five separate occasions about the potential for a destructive repeat flood. The only response that I'm aware of was that staff would place sandbags against the doors to block the floodwater. It was a bandaid approach, and when Princeton got hit this afternoon with a big downpour, there were no sandbags to be seen.

Here's a 2011 post that explains why the flooding occurs, and offered a solution. A now retired science teacher, Tim Anderson, and I explained the solution to school staff a year or two ago. How frustrating to see what looks like a repeat of 2009's flood, with no action taken in the interim.
Posted by Steve Hiltner No comments:

Shade in a parking lot becomes very popular this time of year. Even better if the shade comes from solar panels, which are vastly better than trees at reducing overall greenhouse gases in the atmosphere. (One estimate suggests an average home array is equivalent to growing 50 trees.)

We chanced by Orchard Hill Elementary in Montgomery Township while taking the scenic route home. What a pleasant oasis! Parking in its dappled shade for a few minutes, it was time to dream of a time when all parking lots might be so elegantly and productively shielded from the sun, and you can return to find your car not burning hot but recharged, ready to take you to your next destination. Then we'll really have it made in the shade, with shade made by energy makers.

This is one of several projects apparently paid for not by the schools but by Somerset County. Check out the site's energy production at this link. 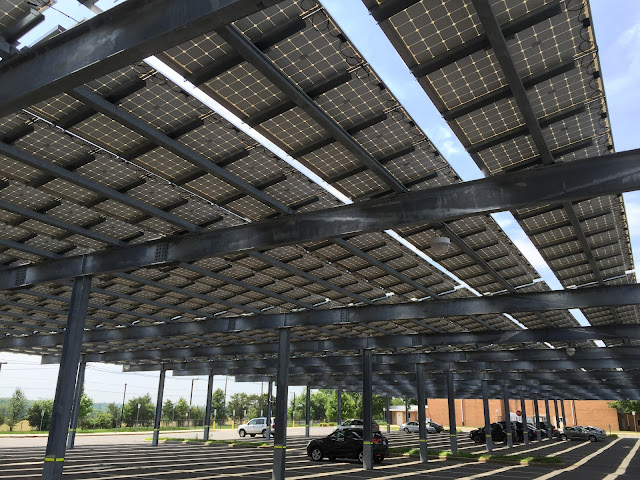 When it comes to recycling, nature puts the human economy to shame. Nature quickly breaks everything down, no matter where it falls, until it can take on new life as part of anything else. We're lucky if even a small percentage of our stuff finds new life. All we can do is try to emulate in some small way nature's genius. Frontage on a busy street can be used to "showcase" stuff that deserves a better fate than the landfill. This week's offerings: a hundred pounds of scrap, a guitar, a couple bed frames. 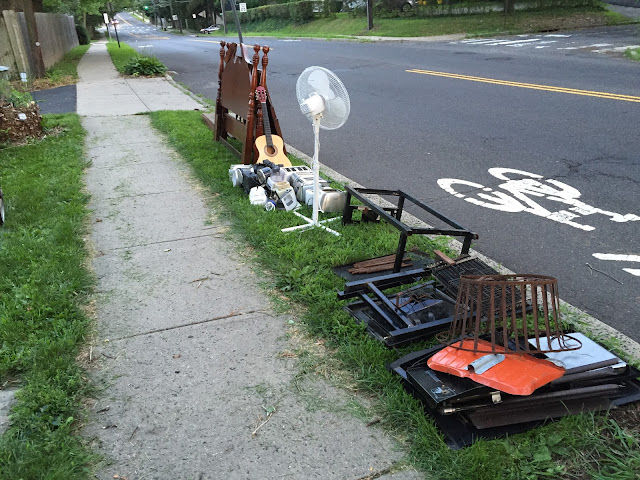 The guitar was gone within an hour. "Needs work", I told the girl, who couldn't believe her luck. She seemed undeterred by the news. If nothing else, she'll learn about how guitars are put together.

I finally relinquished my prize collection of defunct toasters, which disappeared at 6:30am the following morning with the rest of the scrap. 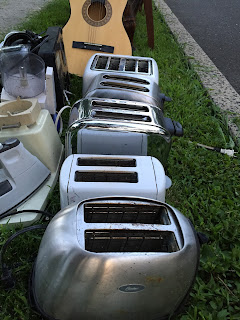 A neighbor on a side street had put out one of those lightweight carts to carry two recycling buckets. It, too, looked destined for scrap, but needed only a nut and bolt to become serviceable again. Nice when that happens.
Posted by Steve Hiltner No comments: 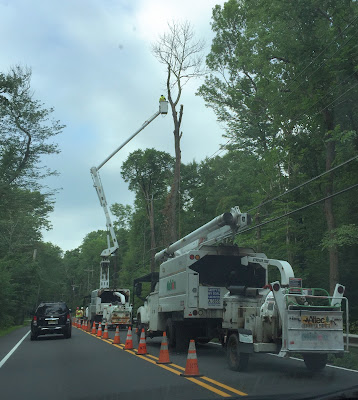 I have seen the future, and it's a New Jersey full of single lane roads. This scene on 206, where crews are removing a dead ash tree, will become commonplace over the next few years, as the Emerald Ash Borer, a.k.a. EAB, lays waste all species of ash, excepting those that homeowners treat with chemical injections. Ash is the most common roadside tree species, and soon gets brittle once it dies, requiring quick removal.

It was easy to tell it was an ash, even from a distance, because it has thick twigs that come off the main stem in pairs.

All of this is happening because the insect was accidentally brought into the country in the wood in wooden packing crates from Asia. Because the insect didn't evolve in America, the native ash here have no resistance to it, and so quickly succumb as it eats the cambium of the trees, essentially choking them.

In the spirit of "get to know your federal government", check out APHIS. Here's a sample page from their website, about EAB.
Posted by Steve Hiltner No comments: 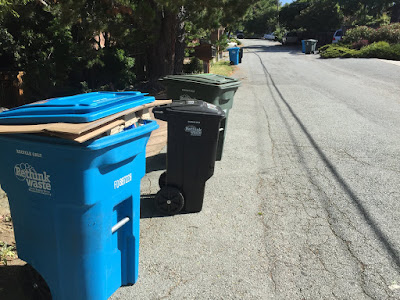 During a recent trip to California, it was a relief to be able to walk along clean streets. One day a week, three different-colored rollcarts appear in front of each house. The smallest one holds trash, another holds recyclables, and another holds yardwaste and food scraps. By the end of the day, they're all emptied and retrieved by the residents, leaving the streets clean for the rest of the week. 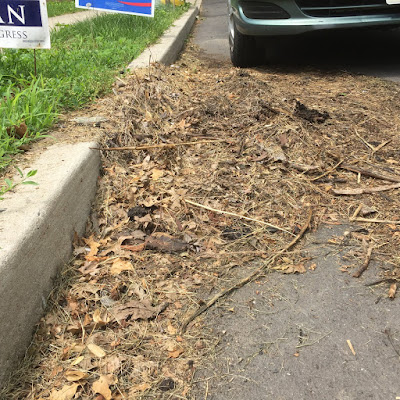 In New Jersey, things are done a little differently. This pile of yardwaste in my neighborhood was on the street for three months. Each time the crews came by to scoop it up, there was a car parked there. 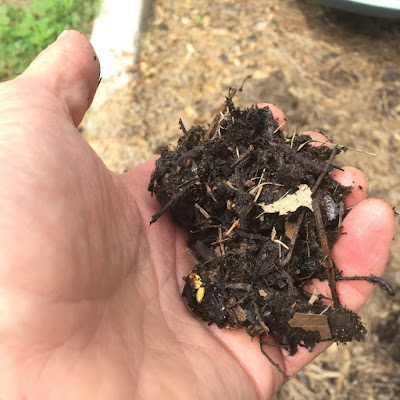 It was eventually hauled away, but by then it had already turned into compost.

Though the fall loose leaf pickup is viewed by many to be necessary, rollcarts could handle the quantities of yardwaste and leaves generated the rest of the year, greatly reducing the ten month long mess in the streets.

As pointed out in previous posts, the preferred behavior, backyard composting, is invisible, while dumping leaves in the street is highly visible, and therefore copied by neighbors. As any parent knows, no amount of education can counteract the power of example. A rollcart for yardwaste provides a much-needed visible, imitatable alternative to loose dumping.

In the meantime, we'll always have California (and North Carolina, and Michigan, and ...)
Posted by Steve Hiltner 1 comment:

Why Did the Chicken Not Cross the Road?

Surprise. So rare to have someone knock on the door, but a guy from the local gas company, PSEG, came by yesterday. Long time no see. He said they check the meters every three years, particularly the relief valves. What's a relief valve?

He pointed to the disk-shaped gizmo next to the meter in the basement, 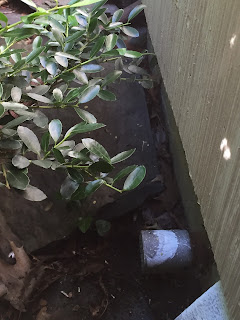 then scrambled behind some shrubbery to find where the gas would be released outdoors if there were some blockage inside. If gas pressure runs amok, the excess gas will be released outside rather than in, the homeowner will smell the gas outside and call the gas company. Since the methane in natural gas doesn't smell, they have to add mercaptan to give it that special leaky gas fragrance. My takeaway was that I need to trim the shrubs away from the house.

The man noticed our free-ranging chickens, which sometimes wander out into our or a neighbor's front yard. I said that thus far they've shown no desire to cross the road. Why would a chicken cross the road, after all, particularly a busy street like Harrison Street, when there's plenty of plants and mulch and good earth to scratch and inspect and gain nourishment from on our side of the car tracks? In this respect, the chickens have thus far displayed a higher intelligence than our otherwise intelligent dog, which would dash out in front of traffic in a second, if left to his own devices. If the cars were instead a herd of cattle stampeding by, would the dog have the same inclination, to head pell mell into a brutal chaos of thundering hooves? I think not, and thus conceived a theory that there's something about wheels that make cars and trucks somehow unreal for a dog.

The gas man and I did not come to a definitive conclusion about this matter, nor the larger matter, which I didn't broach, of human obliviousness towards the global consequences of all those machines rushing by. Are we as blind to danger as dogs, in our own way? He did mention, though, speaking of crossing the road, that a problem with the Prius and other hybrids is that blind pedestrians can't hear them at intersections. There's talk of requiring that electric and hybrid vehicles emit an artificial sound--the equivalent of mercaptan in natural gas.

I was taken back to another streetside conversation I had in the 1960s with a school friend. He said that electric cars are too quiet. Fifty years later, and the same conversation is still being had, with the same din of cars driving by, sending that wonderfully, terribly invisible carbon dioxide skyward. If there's one thing we humans are good at, it's finding reasons to stick with the internal combustion engine. Why would we cross the road to new technologies, sooner rather than later? The answer is up in the air, Junior Birdmen, in a world where our priorities are upside down.

Don't feel too bad if you've never heard of this song, from the 1930s, but here are some new lyrics.

Maybe they should put the equivalent of mercaptan in gasoline, so that our noses would tell us what our eyes do not, that there's danger all around us--something planet-threatening leaking into the atmosphere from the backs of our cars. And you'd think there'd be someone, somewhere, the equivalent of the gas man, making sure that the planet remains in good working order and all the built-in safety mechanisms are in good condition.

As the gas man headed off to the next house, I braved the ambient traffic noise to offer one more idea, that rather than electric cars being too quiet, it's the engine-driven cars that are too noisy. He took it in a good natured, open minded way, and was gone. Nice to have spontaneous conversations now and then. Will anything be different three years from now, when he knocks again?