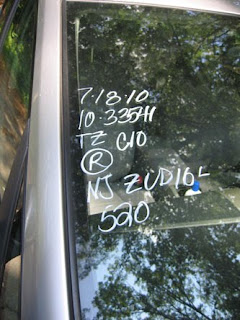 This is a story of growing affection cut to the quick. The affection, for Philadelphia, happened to inhabit me, nurtured by the slow accumulation of good impressions. There is the creative way the city reconnected to its river, by building parks over top of I-95. There are the gallant old ships at Penn's Landing, which we recently explored on a "pay what you want" Sunday morning. The city's approach to environmental needs like recycling sounds progressive. The tour I took of Independence Hall some years back was unexpectedly moving. And then there's the pleasure of walking through the historic district, and the ambiance of a bohemian cafe on Chestnut Street we keep ending up at.

When friends fly in to Philadelphia Airport, we stop in Philadelphia on the way to or from New Jersey. That's what we did yesterday, to soak up some history, late on a relaxed-seeming Sunday afternoon, before dropping my friends at the airport. I pulled in to a parking space on Market Street, and while trying to make sense of the small print on the signs that explain parking regulations, a man approached me. "Don't pay any attention to the signs," he said. "They never check the parking." His voice sounded friendly and authoritative enough to believe, though in return for providing some local wisdom that could save me some parking meter money, he asked if I could spare a couple bucks for a sandwich. I gruffly said no, and went back to getting what we needed from the car.

As we walked towards the Independence Visitors' Center, my teenage daughter informed me that I had been less than friendly towards the man, and that he had seemed upset afterwards, grumbling under his breath. Yes, I thought, maybe I should have been generous and given him some money on the chance that he was indeed a fine man down on his luck, who likes to help out confused tourists in his spare time. I had entered Philadelphia thinking I was an American interested in my country's history, but the encounter with the street fellow had left me feeling like a caricature: affluent, stingy, indulging in idle curiosity on a Sunday afternoon while others struggle just to get by. My daughter also mentioned that she had left her camera in the car. Doubts about whether I had remembered to lock up, and whether the parking space was legal, caused me to go back and move the car.

I drove down a side street, found what looked like a legitimate parking space, then caught up with my friends at the visitors' center. An hour later, looking for a restaurant, we noticed a parking meter man walking down a street. So much for the street man's wisdom. I went back to check the car only to find that it had disappeared. "Is your car gone, too?," someone asked. Thus began an adventure that led me far from my affection for the city. We concluded that everyone's cars had been towed, rather than stolen, though the distinction would begin to dissolve over the next hour. An initial call to the phone number on the parking sign got an answering machine. No car, and no idea where it could be.

I made haste to the restaurant, where my friends reminded me that they couldn't take a taxi or train to catch their plane, because their bags were in the trunk of my car. By chance, a man out in front of the restaurant knew all about what he called "the towing racket," saying he has a case pending with the parking authority. He gave me the phone number and location of the impoundment.

Returning to the scene of the towing/theft, I found the others preparing to drive to the impoundment. They offered a ride, and explained that they were a church group from Illinois that had come to Philadelphia to install new roofs on the homes of people who had applied for help. Somewhere in the scriptures, surely there is a quote to the effect: "Let no good deed go unpunished." The irony was thick as we drove through a desolate industrial area near Ikea in search of our impounded cars. Adding to the irony was a sign at the entryway to the Philadelphia Parking Authority impoundment, displaying the initials PPA, with the A in the shape of the Liberty Bell. The bell, which we had gazed upon just an hour earlier, was starting to symbolize not freedom defended but liberty taken--with our cars and our pocketbooks.

Now, I am not a great defender of cars, or of car culture. If it were up to me, cars would never have been invented, and we would all be walking or riding bikes to nearby stores, or hopping on trolleys and trains. If there were no cars, there would be no concrete wastelands, no stripmalls, no fast food to make us fat, no car insurance or repair bills to pay, no aggressive towing scams, and a whole lot less chance the world will be destabilized by global warming. Impounding all the cars in the world would have its benefits.

But there was the small matter of getting my friends on to their plane, which was now scheduled to take off in not much more than an hour. My teenager called for frequent updates, as the man behind the counter demanded my driver's licence, license plate number, registration and proof of insurance. I managed all but the latter, which took a long wait on hold to retrieve from my insurance company. On one side of the counter were employees joking among themselves. On the other side were people desperate to get their cars back, and sick at the thought of having to pay hundreds of dollars in towing fees and parking fines in the process.

Mindful that the employees were not the architects of this nightmare, I kept my patience, at least until the very end, when the man informed me that the $150 I had just paid was only the towing fee, and that my additional parking fine could be found in the envelope he had just handed me. "Jesus Christ!!", I blurted, as I steamed out the door to finally retrieve my car. Having heard that one couple there was facing a $250 fine, plus the towing fee, I expected the worst. In retrospect, I interpret my utterance to be a calling out of warning to the son of God, lest he be planning a return that involves parking in downtown Philadelphia.

Thanks to a helpful taxi driver I asked for directions, I got my friends to the airport in time. And the experience proved good fodder for conversation on the drive home, during which my daughters and I discussed the in's and out's of trusting strangers. With a $50 parking fine, I was $200 lighter, and most definitely freed of any guilt for being unthankful to the man on the street for his unsolicited advice. Armed with my new street smarts, I'd guess he gets by on kickbacks from the towing company.

In the heat of the moment, I vowed to deprive Philadelphia of any more of my visitor's dollars, to make the city pay for its rude treatment of well-intentioned people. If I had time, I'd try to find out where all that money ends up, or maybe I'd suggest the Independence Visitor's Center develop a new exhibit: "Shakedowns Through the Centuries."
Posted by Steve Hiltner 1 comment: