"Solid waste" really should be called "solid opportunities", because there are ways to save money and reduce the town's negative environmental impact if we get better at keeping compostables and recyclables out of the trash, and leaves out of the street. Come to this Monday's council meeting, which starts at 7pm, to lend your support for giving these issues the attention they deserve.

The Princeton Environmental Commission (PEC) will be on the Council agenda this Monday, May 11, to discuss waste issues with the Town, including many recommendations involving a single-use bag fee, leaf management, composting, government priorities and enforcement, etc.

Today, May 1, property taxes are due in Princeton. In this post, we explore one way in which our tendency to work against nature rather than with it, and to value private space at the expense of public space, contributes to high property taxes and degraded streetscapes. 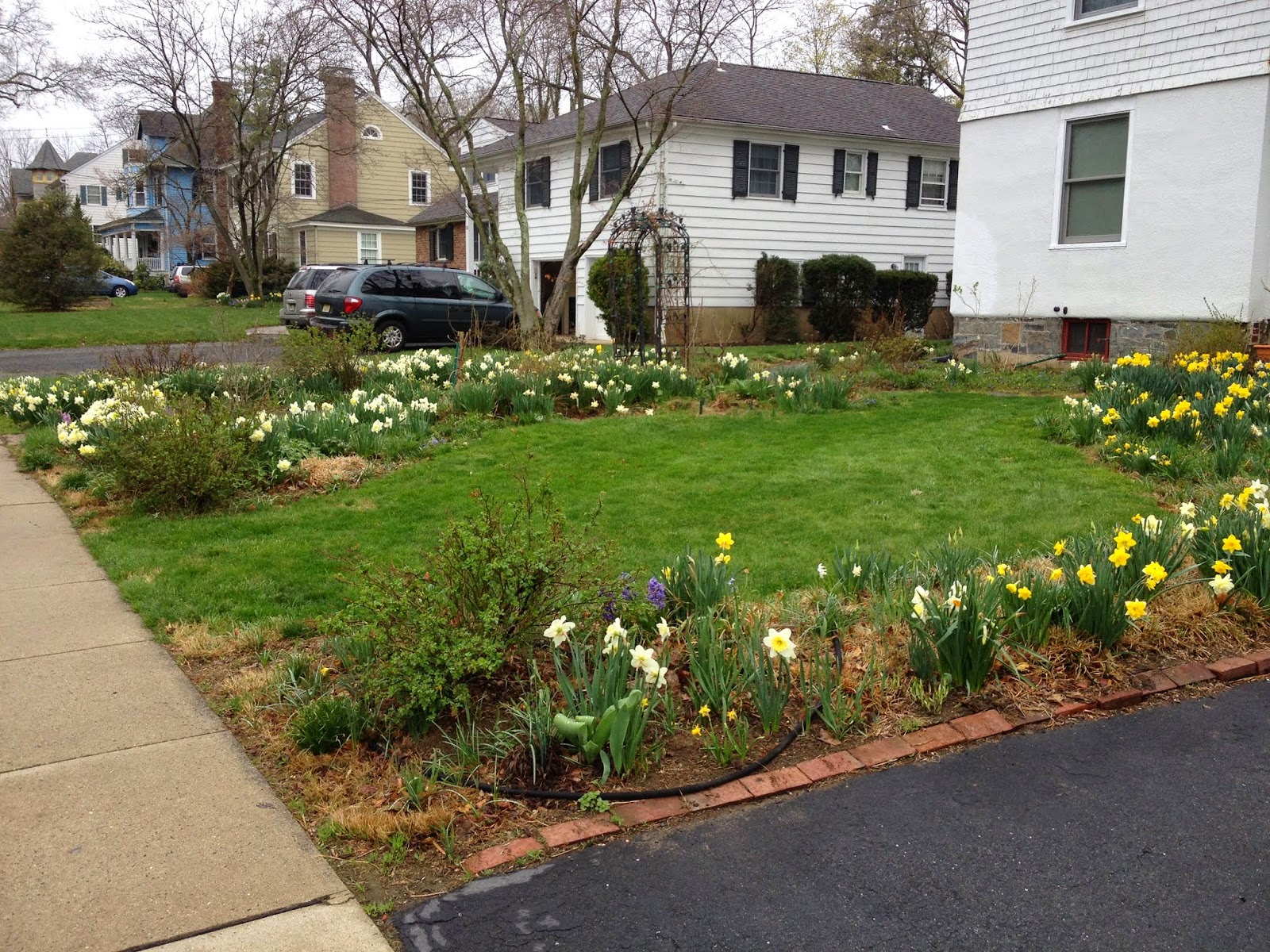 There are many yards in Princeton that demonstrate the same point, but I'll use this one as an example because it's the most dramatic. Most front yards are very plain--a patch of lawn, a few shrubs pushed against the foundation. But here's one in which many flowers--in this season daffodils--have been planted for the public's benefit. Such a contribution to the public viewscape, and the minimization of unused lawn, is to be celebrated. 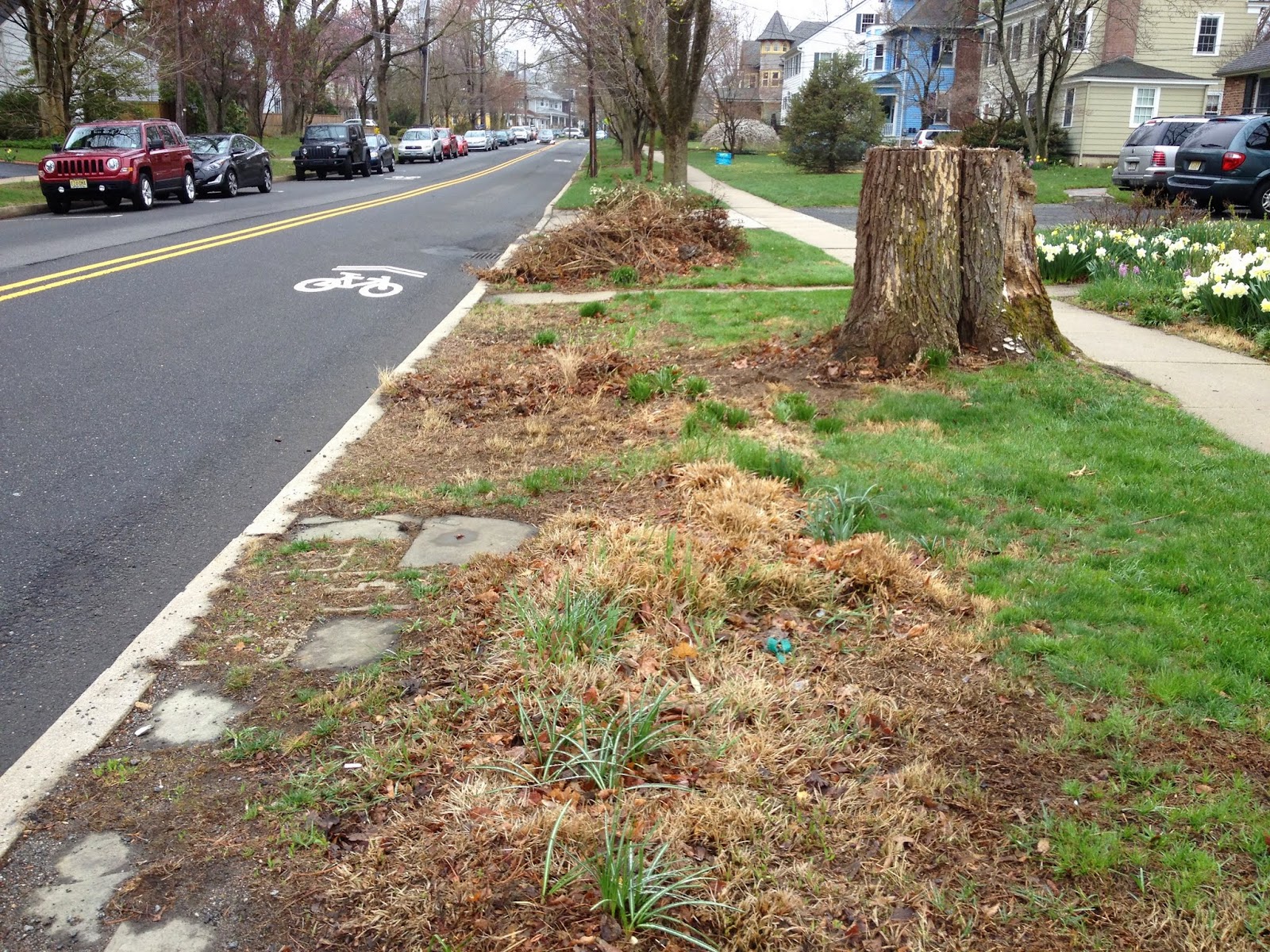 And yet the whole floristic effect is contradicted by what's going on between sidewalk and street. Bare dirt, dead grass, a pile of brush and leaves. It's like a woman wearing a flowery print dress and worn-out workboots. This is a busy street, and the yard shows clear intention to present a grand display of flowers to the town. There's pride in yard and yet complete lack of pride in the public right of way. 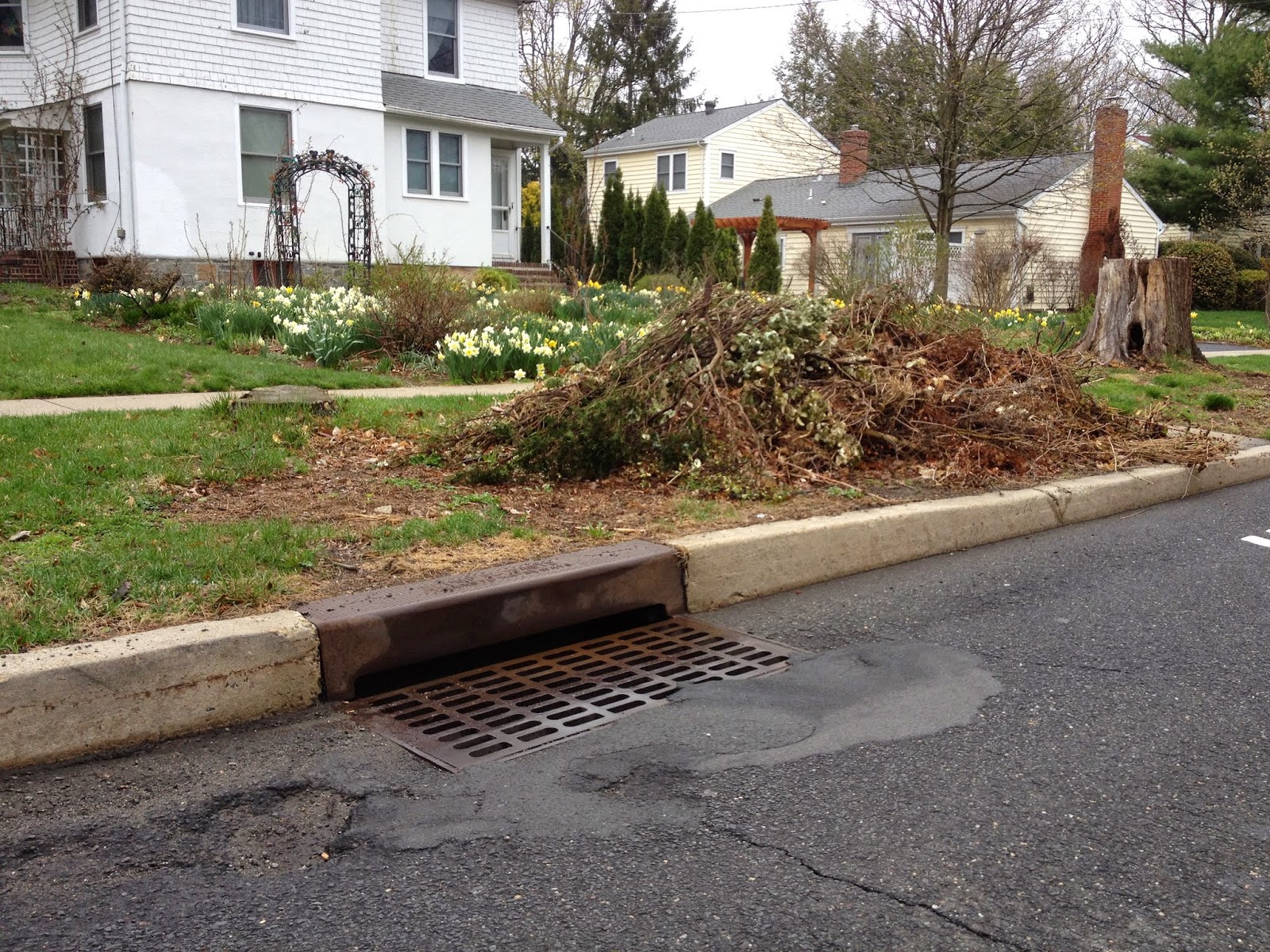 Here's what it looks like from the street. One can't see the flowers for the yardwaste. Again, there are hundreds of similar piles of yardwaste in town, suggesting that this is not one homeowner's approach but in fact a horticultural norm. The contradiction of well-tended yard and brushpile at the curb is so jarring, and yet so common, that I start to get that emperor-has-no-clothes feeling, as if people are able to filter out what is right in front of their eyes.

One explanation for this is that while I may see leaves in their ecological context as nature's way of protecting and returning nutrients to the soil, many others may view it rather as a form of dust that must be swept away to create a clean appearance. It may be that the pile of yardwaste at the curb is actually a source of pride--proof that the homeowners work hard to take care of their yard.

There is, then, repeated in hundreds of yards all over town, an unwritten agreement that the shared streetscape must be sacrificed in order to sustain order and neatness on the private property on the house side of the sidewalk. This directly contradicts the shared sentiment distilled into town ordinances. Ordinances require that trash cans and recycling buckets not linger at the curb for more than a day. State and local laws restrict how long leaves, etc. can linger at the curb. Streets must be swept by a street cleaner once a month. Common practice among residents largely defeats these attempts to regulate and value the appearance and function of the streetscape. 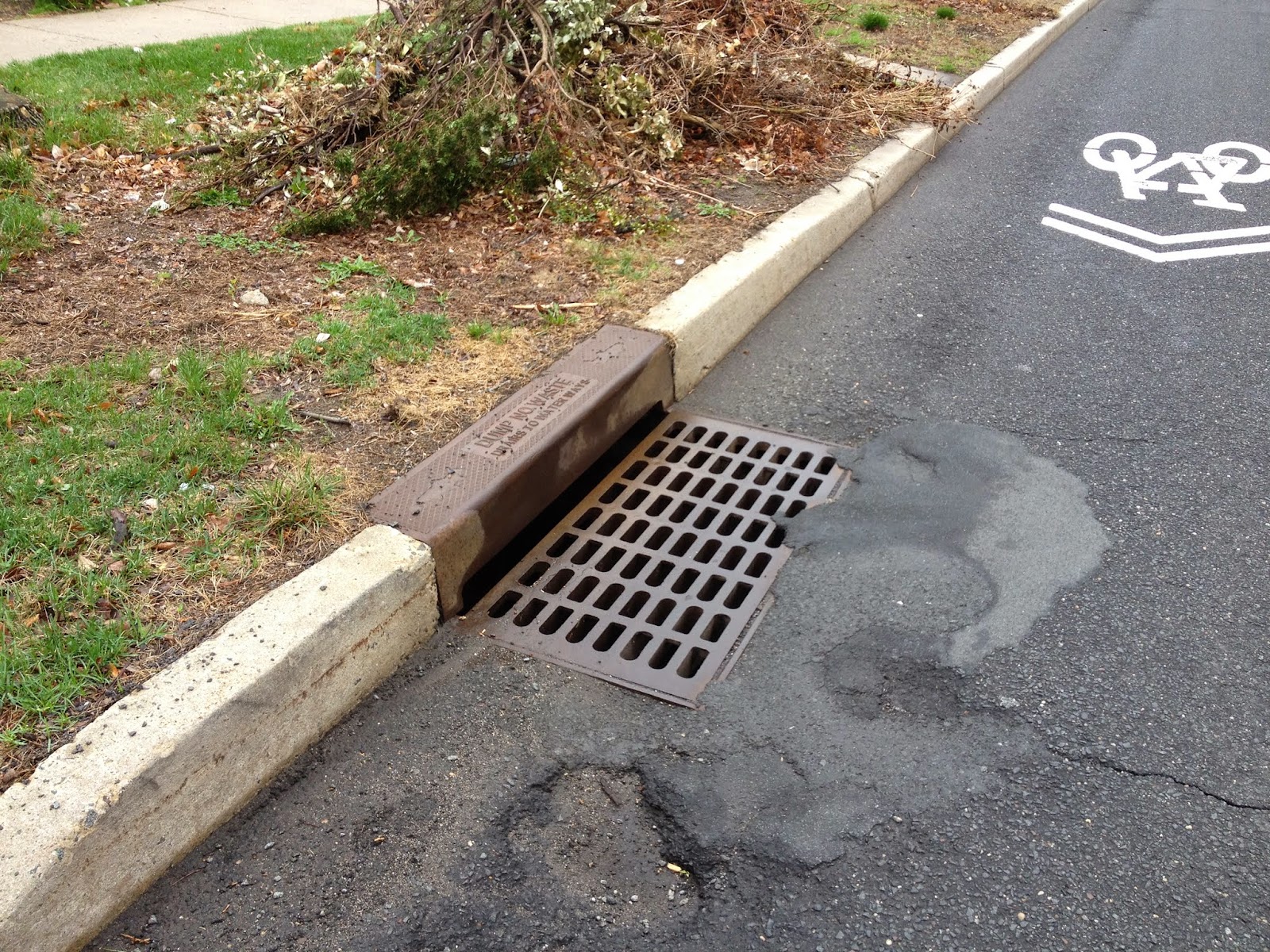 One significant component of the scene is the stormdrain. Water can seep into cracks between storm drains and pavement, causing a progressive deterioration that undermines the pavement and leads ultimately to the collapse of the sewer grate that covers the storm drain. Given how much time and money the town must devote to collecting leaves and brush dumped year-round in the street, often illegally, it's important to ask to what extent other maintenance needs are being deferred, and what the budgetary consequences are. 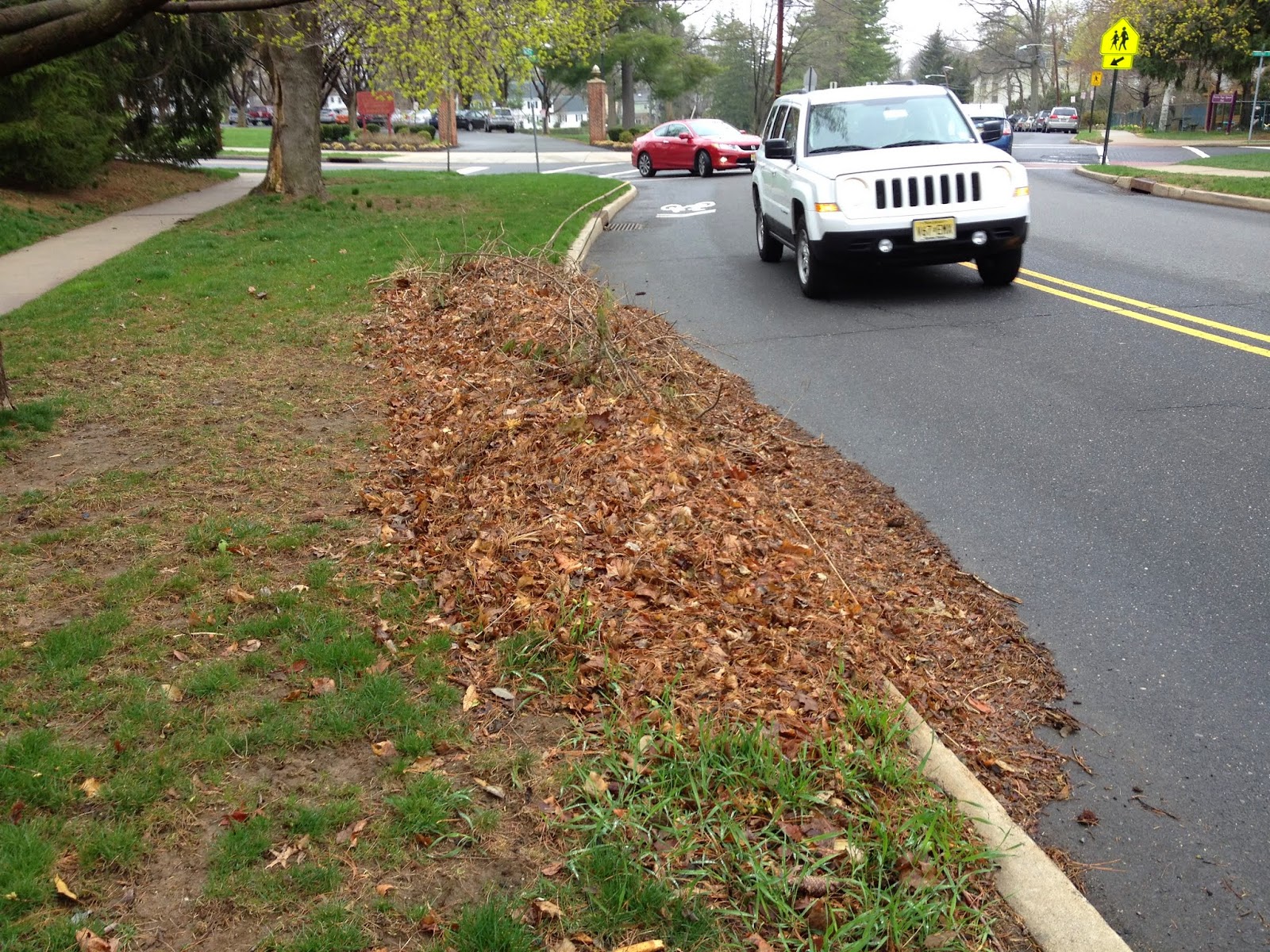 The piling of leaves, etc. at the curb spawns imitation by neighbors looking for visual cues about how to behave. Pickups in most neighborhoods this time of year are monthly, and if a resident imitates neighbors rather than pay attention to the pickup schedule, the pile of leaves will kill the grass before pickup day arrives, further marring the streetscape. 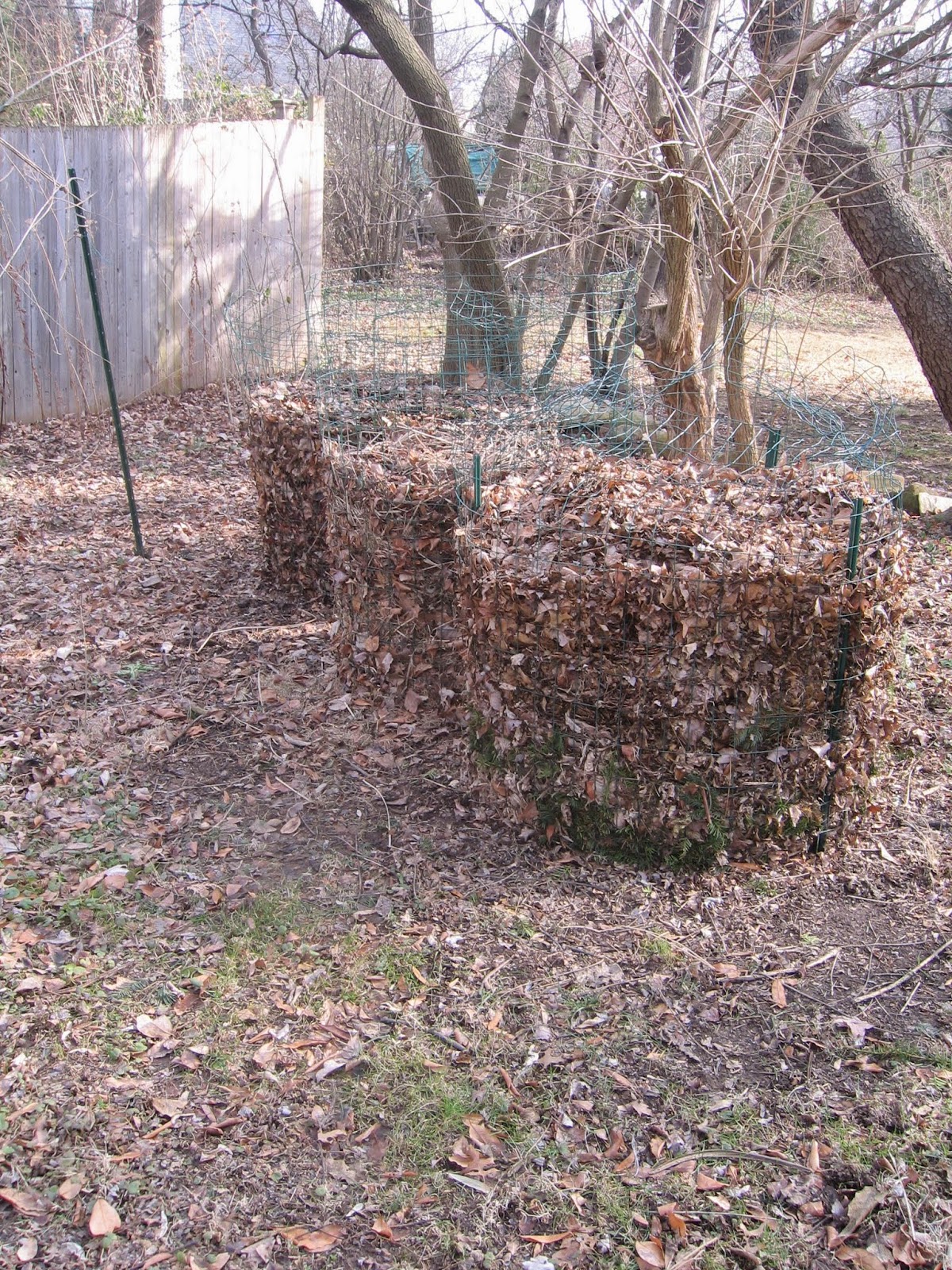 One alternative is to pile or corral leaves in a back corner of the property, perhaps screened by shrubs, and let them return to the soil. This approach is less taxing on town services and the eyes of passersby, and is ideal for storing leaves while keeping them from blowing around. Its only drawback is that neighbors can't see it, and therefore won't think it's the way leaves are supposed to be handled. In other words, good behavior is invisible, while illegal dumping in the streets is highly visible and gets copied by neighbors. 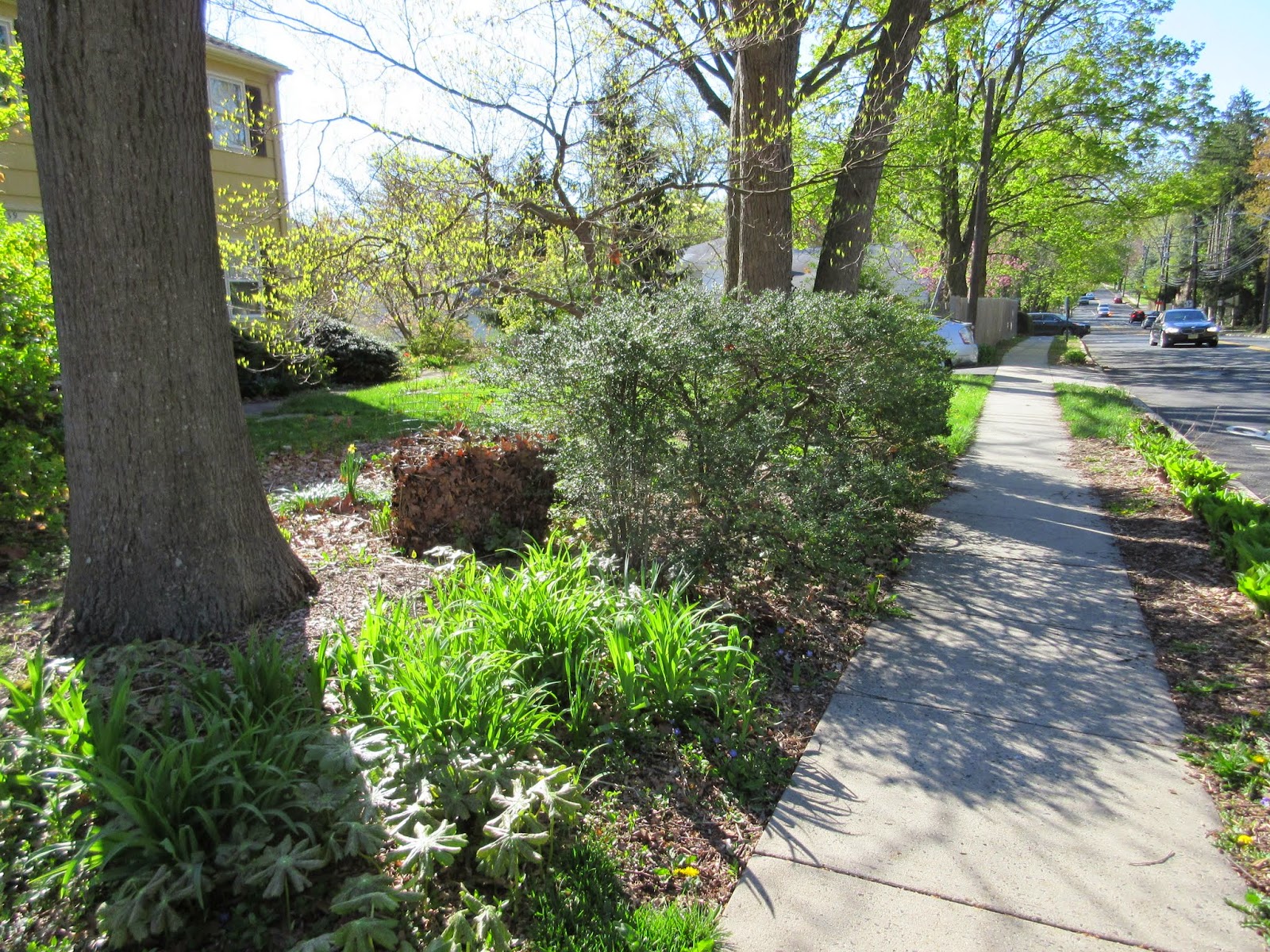 Cleaning out some flower beds this spring, I decided to set an example and put the leaves in a leaf corral in the front yard, tucked behind some shrubs. It's neater than piling the leaves in the street, and even oak leaves quickly start to settle down in the green wire corral, making room for more cuttings through the summer. 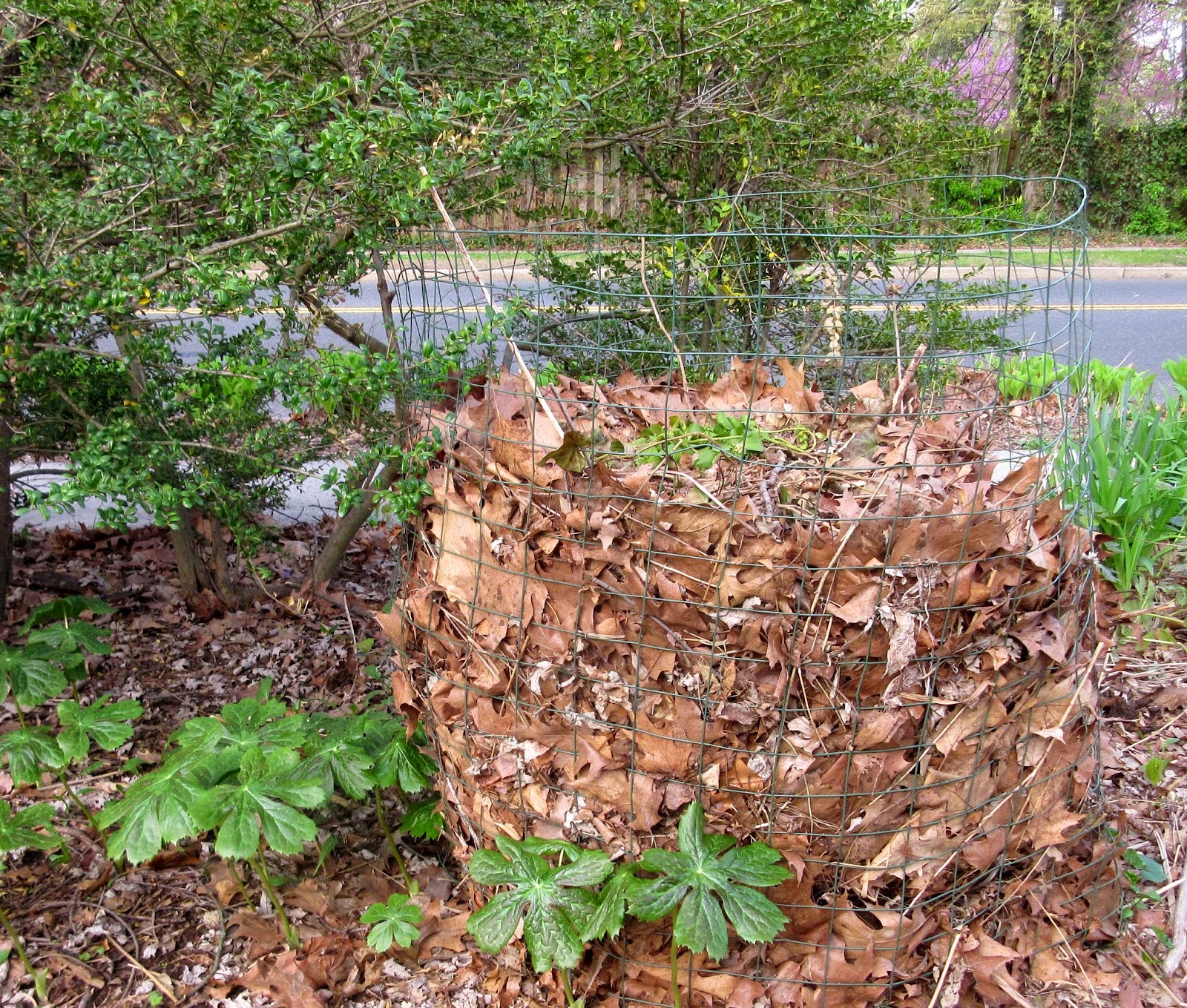 Already, the pile has dropped a foot, and the green wire is almost invisible.

There's symbolism in this small corral of leaves. It says that, with just a little adaptation, we can play along with nature's endless cycling of nutrients from soil to tree and back again, rather than seeing nature as a nuisance or the enemy. It says our shared, public right of way is meant not to be a dumping ground, but rather a source of pride. And it says that public employees have more important things to do than chase after leaves that homeowners can easily use to their advantage on their own property.