(Written in 2013, this post is still useful for understanding the source and nature of the water coming from your tap. There's also a link further down to a kayak trip we took down the Millstone to the site of the water treatment plant.)

This past summer, we had some trouble keeping goldfish alive in our backyard miniponds. One possible reason is the chloramine used to disinfect Princeton's drinking water. Chloramine--a combination of chlorine and ammonia--is safe for mammals but not for fish and frogs. By augmenting the pond's rainwater with town water from the hose, I may have unwittingly zapped the fish. The chloramine is safe for people and other mammals because our digestive systems break down the chloramine before it reaches the blood stream. Fish, in contrast, absorb it straight into the blood through their gills. Water used for dialysis also has to be filtered.

If you've noticed a stronger smell of chlorine in the tapwater lately, it's because our water company, New Jersey American Water, has switched from chloramine to free chlorine ("free" chemically, not monetarily) for the duration of this month through February, as part of a routine cleaning of the water delivery system. Free chlorine is a stronger disinfectant, but isn't used year-round in part because chlorine can combine with trace organic compounds in the water to form organochlorides, or what they're calling DPEs these days (disinfectant bi-products). The EPA seeks to minimize these in drinking water. A company rep told me that any slight increase in DPEs caused by the use of free chlorine for this annual treatment is well within EPA safety standards.

When I moved to town in 2003, I somehow had the idea that Princeton's water was disinfected with ozone, which is the most thorough and cleanest means of disinfection, but can be pricey and doesn't last long in the water.

Thanks to a call back from a NJ American Water representative named Jordan, I learned just now that I was partly right about the ozone. It's used to initially disinfect the water at the plant, but is then followed by a treatment with chloramine, which is more stable and will continue keeping the water clean during its 20 some mile journey to our taps from the Raritan-Millstone Water Treatment Plant. Surprisingly, he said that chloramine was in use as a disinfectant as far back as 1919, and has been used for Princeton's water since the early 1950s.

Fish owners can get tablets at a pet store to remove the chloramine from the tapwater. Jordan said that the Brita filters don't really remove it. Watering indoor plants with tapwater should provide a tiny amount of fertilizer, given that the chloramine should break down in the soil and release nitrogen in the form of ammonia, but a web search offered no confirmation of this.

By contrast, the chlorine being used this month and next can be easily removed from the tapwater, if you want to do that for some reason. Set the water in an open container on the counter for an hour or so, or put it overnight uncovered in the refrigerator. Boiling for five minutes also does the trick.

The water company provides more info on chloramine here, and a discussion of its impact on fish, and how to remove it from the water, here. 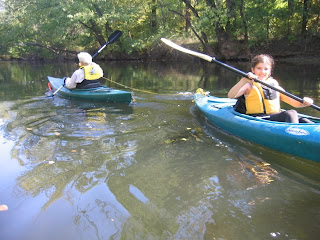 Two years ago, I canoed with my daughter, and a friend who works on state water quality, down the mighty Millstone River to Princeton's water plant. The pictorial tour can be found here.

For the purposes of a baseline, I tried to find out how much water Princeton uses, but it's hard to tell how much of the water sent through the plant's 72 inch trunkline ends up in Princeton.

Pretty much all of our water comes from that plant, which in turn draws essentially all of its water from the confluence of the Millstone and Raritan Rivers. Since Princeton is in the Millstone watershed, the quality of the water that flows off of our streets has some impact on how clean will be the Millstone's water by the time it reaches the water treatment plant, 20 miles downstream.

In addition to quality, the quantity of water flowing off of our streets and those of other towns in the Raritan and Millstone watersheds could also affect our water plant. Located close to the rivers, the plant is protected from flooding by wetlands and an earthen berm more than 12 feet high. The berm was enough to keep Hurricane Sandy's waters at bay, and backup generators kept the plant running during the power outage. The NJ American Water rep is confident the water plant is secure from flooding, but I'd feel better if we weren't increasing impervious surfaces and continuing to inject all of those climate-changing gases into the atmosphere.

The story of Princeton's drinking water, like any story about a watershed, is a story of how connected we all are.