Doors to Open, Doors to Close

As part of her advice to the graduating fifth grade class years ago, the principal of my younger daughter's elementary school said "If you open something, close it." I immediately remembered a scene in a movie in which Tina Fey comes around a corner and rams into drawers left open by husband Steve Carell. All my life, I have closed any drawers or cupboard doors I opened. It was automatic, but when someone else in the family began leaving them open, I started doing the same sometimes, a vexing corruption of habit that then required me to consciously remind myself to close them.

What the principal didn't have time to go into is that, in a house, there are doors to purposely leave open, and doors to keep closed.

In our house, the doors of the refrigerator are immediately closed, of course, but the doors of a second refrigerator, unused and unplugged to save energy, need to remain open a crack. It looks funny and is counterintuitive, but if left closed, the anaerobic bacteria, which thrive in warm places where the air can't reach, will take over inside the unused frig and cause a stink. 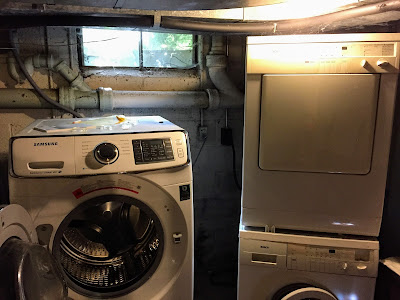 And in the laundry room, the door of the front-loader washing machine has to stay open when not in use. If it's closed, which looks nicer, the smelly anaerobic bacteria start flourishing there as well.
But the dryer? That door stays closed. Why? Because the dryer is vented to the outside, so keeping the dryer door closed when not in use will keep the outside air--too cold in winter, too hot and humid in summer--from coming inside.

Princeton Proposes a New Approach to Collecting Trash and Foodwaste

Princeton is trying to deal with rising costs for collecting and disposing of solid waste. According to the consultant Princeton hired, Wayne Defeo, other municipalities have seen increases of 45-150% when they seek bids for new contracts. Scarcity of workers has caused salaries to increase. Injuries, and therefore workmans compensation claims, are common in this line of work. Princeton has its trash hauled to a transfer facility at the Mercer County Improvement Authority, whose costs are the highest in the state.

Princeton's current contract will end in December, 2022, providing an opportunity to do things differently and potentially minimize the increased cost of a new contract for collection next year. The town describes the options it is considering on its website. Below is a description that includes additional information gleaned from a presentation at town council on August 10.

One strategy the town will use to control rising costs is to automate collection. Instead of having a driver and two crew members collecting trash, an automated truck has only the driver, plus a mechanical arm that grabs a trash cart and empties its contents into the truck. This approach requires a particular kind of cart, sturdy enough to be lifted mechanically, and so Princeton is planning to provide each resident with a new cart that can be lifted by automated garbage trucks. There are different sizes of carts: 32, 64, or 96 gallon. Princeton will likely go with the 64 gallon size, though residents may be able to request a different size. The carts would have barcodes for quick identification, and labels describing what can be put in the cart.

Under this new system, which is typical elsewhere in the country, the trash cans residents currently own would no longer be useful for trash collection. The consultant stated at the August 10 council presentation (11:00 to 1:47:00) that residents' trash cans would be collected and either recycled or reconditioned and made available for reuse elsewhere.

For bulk waste, that is, trash that a resident can't fit in the new 64 gallon carts, residents would need to make a reservation for free pickup. Bulk pickups would be weekly. Surveys of other towns found that 6-10% of residents put out bulk waste for collection. Each week in Princeton, the collection service would input data on what residents are requesting bulk waste pickup, and figure out the most efficient routes for their trucks to take. An app called recyclecoach was mentioned as one approach to making reservations, though reservations could also be made by phone.

Discussion at the council meeting suggested that bulk pickup is a service most commonly used in lower income neighborhoods, where renters come and go.

The amount of trash generated by Princeton residents has increased from 5000 to 6000 tons over three years. One way to reduce the amount of trash headed to the Mercer County Improvement Authority and its high "tipping" fees would be to divert foodwaste from the waste stream. Foodwaste makes up 25% of the wastestream. Rather than sending foodwaste to the landfill, it would be collected separately and sent to a nearby composting facility. This could reduce the cost of tipping fees for this portion of the wastestream by 30%. Residents could also put herbaceous (not woody) yardwaste in the carts.

Thus, Princeton will seek bids to divert foodwaste from the landfill and send it instead to a local composting facility. A foodwaste composting program would only be implemented if the bids prove affordable.

Princeton had a voluntary foodwaste program in the past, but it was terminated in 2019 due to lack of nearby facilities and problems with contamination. A particular problem was that some participants put their foodwaste in non-biodegradable plastic bags that messed up the composting process. Some plastic bags are compostable. Others are not, and will contaminate the composting operation.

Why does Princeton think that foodwaste collection and composting would work now when it did not in the past? Staff offer a number of reasons. New composting facilities have opened up, particularly one in Trenton that uses foodwaste to generate energy and a useful compost. In addition, the municipality has put together a staff that will be better able to monitor the program and educate residents on how to recycle foodwaste correctly.

Princeton is therefore seeking bids from haulers for weekly collection of foodwaste from all residents. If the bids prove affordable, Princeton would go ahead and begin collecting foodwaste curbside again. For this organics collection, each resident would be given a 64 gallon compost cart. All kinds of food, including meat and bones, could be placed in this cart. Potentially, some compostable types of paper, such as pizza boxes, could be placed in the carts as well. Though all residents would receive a compost cart, participation would be optional, at least at first. Residents would be required to keep the carts whether they participate or not, because separation of foodwaste from trash could become mandatory in the future. The town's new compliance officer would monitor compost carts placed at the curb, and help residents limit contamination.

The relatively large size of the 64 gallon carts (the green compost carts used for the voluntary foodwaste program were 32 gallon) will make it possible as well to containerize some yard waste that might otherwise end up as little mounds decorating the streets yearround.

There are lots of questions to ask. Could residents get carts that are larger, or smaller, than the 64 gallon size? Will residents be supplied with countertop containers for holding foodwaste in the kitchen? If the separation of foodwaste from the trash is optional, how many residents will actually change their habits and make use of the carts they are given? Will monitoring and education be enough to control the contamination of the foodwaste stream that was a problem in the past?

All of this is a prime example of how complex are the basic municipal services that keep our town functioning. And this proposal does not include a plan for shifting away from expensive loose collection of yardwaste that leaves our streets messy year-round. In any case, change is a'commin'. The carts are standard elsewhere in the country. They have lids to keep the contents dry, and wheels for easy mobility. Sometimes change can be for the better.