My daughter was bored this past Saturday night, so I checked the calendar at www.princetonol.com, and was surprised to find a free concert of jazz being presented at the Pettoranello Gardens amphitheater. Surprisingly few Princetonians can tell you where Pettoranello Gardens is, fewer still know about its amphitheater, and of those only a small subset are aware of the jazz and other performances that periodically take place there.

You needn't learn how to spell the name, but it helps to know that this lovely spot is just across 206 from the Community Park soccer fields. Turn onto Mountain Ave, take the first right into the paved parking lot, then head downhill past the wooden sign until you reach a pond with a trail around it. The amphitheater is tucked into the berm that shields this oasis from the noise of 206. The calendar of jazz concerts this summer is at www.bluecurtain.org (Note: try https://www.facebook.com/pages/Blue-Curtain/113791645408). There may be other programming as well.

Most every Sunday morning at 8am, volunteers with the Pettoranello Foundation meet at the Gardens to tend to the landscaping, as they have for some 15 years, with help from township staff.

But I digress from the events of Saturday evening, June 14, when my daughter and I rode our tandem bike towards Pettoranello Gardens to catch the end of the show, unfazed by the storm front that loomed on the horizon. We arrived at the amphitheater at dusk, to find avant-garde alto saxophonist Oliver Lake playing with a guitarist and drummer, as lightning flashed in the background and the wind kicked up.

It was the most richly metaphorical performance I've ever heard. The wind kept blowing their written music off the stage, as audience members scrambled to retrieve them--their music all the while going places no written notes could ever convey. And seeds, probably from a cottonwood tree, swirled around them as they poured notes out into the night air. Their music and the approaching storm raged as one, with one indomitable force resisting envelopment by another.

People were reluctant to run for cover, mesmerized by the drama. Finally Lake played a short melody to end, and spoke parting words into the mic. The drummer stood up, still playing the drums, and called to the audience in semi-mock urgency to run for cover. "Grab something and run!" he said, and seconds later heavy raindrops began to fall. We biked towards home in the downpour, taking refuge at Conte's, where the closed doors and A/C made the storm seem a distant dream.

Email ThisBlogThis!Share to TwitterShare to FacebookShare to Pinterest
Labels: Places To Go 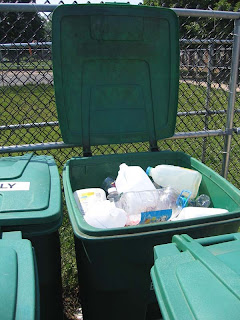 The schoolyear-long effort to get recycling going again in district schools can finally claim some success. Some schools, like Riverside and LittleBrook Elementary, quickly embraced recycling last fall and made it a part of everyday activity, as students learned to take recyclables to a centrally located bin that is then rolled out to the loading dock by the custodians. Recycle bins, paired with trash cans, are even showing up at special events like school picnics. In other schools, the throwaway culture has been harder to change, but persistent prompting has had an effect.

It can now be said that all schools are recycling. There are still incidents of contamination (e.g. eight big, thick plastic trash bags in a bin at the high school meant for bottles and cans), but both quantity and quality have continued to grow at the high school and Community Park Elementary--two schools that were having difficulty getting recycling going. The middle school had a dip in participation, but then rebounded.

A truck driver who picks up recyclables echoed my observations, and also suggested there are ways that the district schools could save a lot of money on waste disposal if they chose to, with consistent recycling being one of those means. One estimate I heard from the NJ Dept. of Environmental Protection is that a school district the size of Princeton's could save $10,000/year through comprehensive recycling.

We can celebrate the progress, while recognizing that there is still nothing built into the school system's modus operandi to insure that recycling will not backslide. No one in-house is checking the bins to monitor participation and quality. It is all too easy to imagine recycling falling apart without anyone in the administration or in building management knowing. The schools could easily return to the situation nine months ago, when some administrators thought schools were recycling when in fact they were not.

Still, the movement is very much in the right direction. Teachers and students and some custodians have shown strong interest and made the effort. If the school district as a whole sees it as in its fiscal and educational interest to make recycling a higher priority, the gains of the past year can be built upon.
Posted by Steve Hiltner No comments: