Scrapping Our Role as Climate Saboteurs 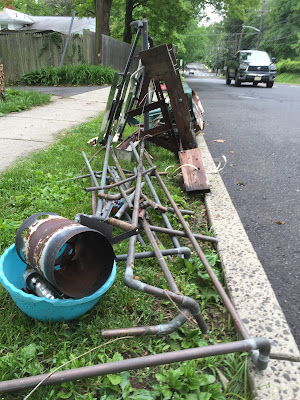 There was a time, during WWII, when patriotism meant contributing scrap metal to the war effort. Movie stars like Rita Hayworth lent their glamour to the cause. Soldiers were fighting on the front lines, and citizens were backing them up by contributing what they could and making do with less.

Memorial Day still honors those who have died while serving in the armed forces, but we seem to have lost an awareness of the continuum of service and sacrifice, of how our own civilian lives connect to keeping the country secure.

We know now that our biggest enemy cannot be beaten by an army. Bullets cannot hold back a rising sea, stop a deluge or end a drought. American soil is most vulnerable not to foreign invasion but to the catastrophic melting of ice caps. Despite all the positive ways we spend our days, each one of us has been recruited as an unwitting soldier in a war upon our shared estate. As civilians, our struggle every day is to limit our roles as unintentional climate saboteurs.

There are political elements that strive to slow progress, and keep us armed with tailpipes and chimneys gushing global warming gases for as long as possible. The tide is turning, though. Renewable energy and the batteries to store it are dropping rapidly in cost. One of our neighbors recently bought an electric car that runs 230 miles on a charge. In time, and let's hope it's soon enough, scrap will be doubly patriotic because it will include the star-crossed machines of combustion. Gas stations will be obsolete. We'll scrap the war on our land, our climate and our future, in a global disarmament as our machines are silenced of their engine groans and fossil carbon sighs. Our cars and homes will run on the sun and the wind. At last, our civilian lifestyles will be supporting our troops' mission to protect American terra firma, rather than working against it. 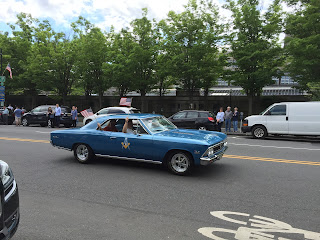 This year's Memorial Day parade was brought to us by gasoline. There's no question about the grip it holds on our lives, our hearts, our memories. I made models of souped up cars like this one when I was a kid. Can still smell the plastic and the paint. But gasoline's grip will loosen. Maybe Memorial Day will still be a day to smell the bite of exhaust in the flag-filled air. But the other 364 days of the year, we'll have moved on, despite ourselves. May the future be welcoming despite our long delay.

A Scavenger Cleans the Scene 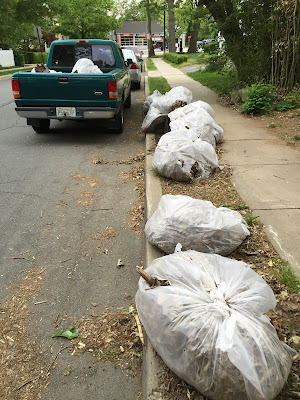 The town doesn't pick up leaves bagged in plastic. Some landscape crew hadn't gotten the memo, however, so these plastic bags full of leaves sat in front of a rental on Linden Lane, creating an eyesore for weeks. Maybe it was months. They sat there so long the UV radiation started degrading the plastic. What to do?

Time for Mr. Sustainable to swoop in with his greenmobile--able to jump puddles in a single bound around the block--to turn a lose-lose into a winsome win-win. "Sure," he thought, "I could use the leaves. Leaves are always useful, for keeping moisture in the soil, contributing nutrients, and smothering weeds. The chickens will scratch under them for bugs. Happiness will prevail. The more leaves the merrier." 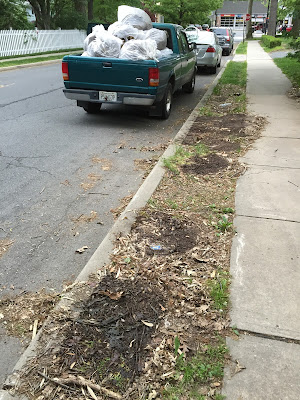 This is the sort of service scavenging species provide in nature every day. We think of them as no better than beggars, freeloaders, opportunists. A vulture exploits others' misfortune, and yet they too serve by picking clean what is foul. They find utility in others' messes, and leave the world a cleaner place. We should rank them, and their willingness to view trash as a resource, more highly in our estimation.
Posted by Steve Hiltner No comments:

Have plastic pots you don't want to throw away? A local resident called up nurseries, asking if they take used pots. Finally, he found out that Lowes has a recycling program for pots. Below is text from their website. I'd encourage people not to make a special trip, but integrate it into other Route 1 errands, lest the gas burned do more harm than the good of recycling the pots.

Lowe's is committed to exploring new opportunities to reduce waste and help consumers do the same. We launched a nationwide Garden Center recycling program in February to help keep rising mounds of plastic plant containers out of landfills.

Lowe's recycled 230,000 pounds of plastic in just three months during a pilot test in which 22 stores collected plastic pots, trays and tags that are used with live nursery items. Following that success, Lowe's expanded the program to all stores in the continental United States, more than 1,700 locations.

Generally, curbside recycling programs are unable to accept plastic plant containers, such as pots and hanging baskets. This new program gives consumers a responsible recycling option and makes it easy for them. We provide a cart for stores and customers to return plastic plant trays, pots and tags, regardless of condition. No matter where consumers purchase the plant, they are encouraged to return the materials to a Lowe's Garden Center to be recycled.