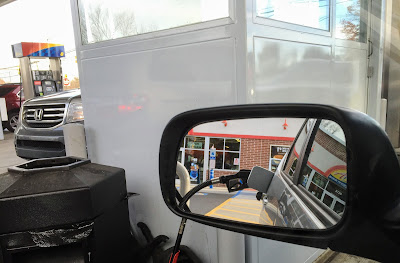 Compartmentalization was a trick of the mind that pundits would attribute to Bill Clinton, when he was having to attend to his presidential duties while fending off the endless attacks launched by the Republican Congress.

But it's something we all do to sustain our view of ourselves as basically good people while we contribute daily to the unraveling of planetary functions. We still have little practical choice as individuals but to unintentionally hasten civilization and the planet towards apocalypse. For that ethical bind, we can point to those cowardly, reckless and opportunistic politicians who deny the existence of and solutions for climate change. Through their failure to act, through their refusal to acknowledge that freedom must be accompanied by responsibility, we still have little choice but to harm our children's future by continuing to seed the atmosphere with CO2 just to get through the day.

Pause now to consider, with a sense of awe, how adept we are at compartmentalization. Even though most people acknowledge the grave risk posed by a radically altered climate, sanity requires an insulatory mechanism that keeps thoughts of climate change at a distance, much like the unconscious effort we constantly expend to shut out background noise, which as it happens is mostly generated by those same climate changing machines.

If you've ever been somewhere outdoors away from the machine sounds of cars and planes, you may have noticed your body and mind relaxing in a new way. That is how it feels to me when my mind no longer has to work at blocking out background noise. You don't even realize what a mental burden you've been under until that burden is removed. Imagine the feeling of freedom and relief we would feel, a deep inner release of tension, if we were no longer trapped in the role of hastening climate change as we drive our cars and heat our homes.

I began driving before warnings were sounded about climate change, and even though I think daily about the dangers of using carbon energy from underground, I can still pull into a gas station without giving a thought to the greater meaning of the transaction at hand. 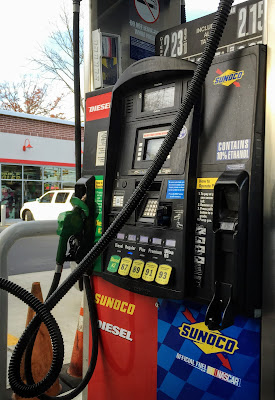 Filling the tank seems like just one more thing to do, along with buying groceries. Unlike cigarette packaging, there's no warning on the gas pump. In New Jersey, we sit passively in our cars while the gas is pumped for us. The experience is completely sanitized. Then, on the highway, we're insulated from the noise of the engine. The exhaust pipe is hidden behind us, and the CO2 is invisible. We look ahead as we drive, intent on where we need to go, but where we're headed collectively is being determined by what's pouring out of the back of the car. And it's all perfectly legal. In a safety obsessed culture, it is (im)perfectly legal to contribute to future apocalypse. In fact, this behavior is our most visible public activity, a massive ethical lapse on full display for our children to wonder at, although they too will become expert over time at insulating their awareness.

Growing up with gasoline--the almost pleasant sting of its smell, the play of light as it flowed into the tank of the lawnmower--I remember feeling reassured that the main products of its combustion are carbon dioxide and water. Harmless, I thought, and how I wish now it were so, that the world's good and bad hadn't turned upside down. How I wish that my most lasting daily legacy, what the earth will still remember of me centuries and millennia from now, would be something other than the sequestered carbon I knowingly summoned from the pump and scattered to the winds, so that I could live a normal life in this abnormal age.
Posted by Steve Hiltner