Shared Spaces: Snow as the Inverse of Leaves

If we dealt with snow the way we deal with leaves, people would shovel their lawns and dump the snow in the streets. Winter, then, is the opposite of fall. In fall, people clog the streets with leaves and expect the town to clean it all up. It represents a massive shift of responsibility from private to public. In the winter, it's the homeowner's responsibility to tend to the public space by clearing the sidewalk of snow. We're forbidden to push any snow out into the street, but a municipal plow can come along and push public snow onto our driveways. This often necessitates additional shoveling on our part, but people understand that the annoying reblocking of our driveways is unavoidable if the town is to efficiently clear the streets. Safe, clear streets are valued in winter, devalued in the fall. 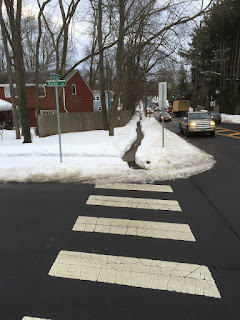 The act of tending to the public space reacquaints many of us with some forgotten muscles, and sometimes with seldom seen neighbors. Public responsibilities drag us briefly out of our private caves. I saw the neighbor down the street out shoveling, the fatigue of owning a corner lot showing as she leaned on her shovel to take a break. Notice she shoveled an opening to the street. If the remaining Beatles showed up to replay their Abbey Road album photo, they'd be able to make it from crosswalk to sidewalk and continue on their way. 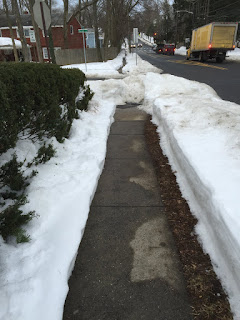 Not so just up the road, where a sidewalk was cleared but access to the street remained blocked, requiring pedestrians to either climb through 2-foot thick soft snow or double back and walk on the street. The homeowner stopped at the curbcut, apparently thinking any snow on the street was the town's responsibility. A lot of sidewalks must be like that, because the town had a front loader out at 5am, clearing pedestrian access to intersections. 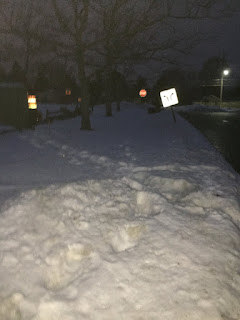 Curiously, the Princeton Shopping Center left its sidewalks uncleared. This seemed as unlikely as my decision to walk to Dunkin' Donuts at 6:30am to buy the "stick" donuts my daughter had made an unusually persistent request for the day before. At least the errand doubled as exercise for the dog. What's the Shopping Center's logic, to be dissing its pedestrian customers four days after the storm?

(Update: the Shopping Center's sidewalks were cleared the day after this post was published.) 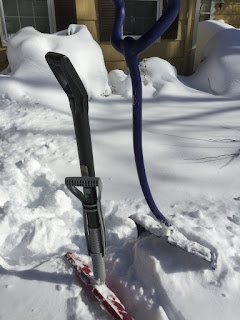 My wife, stirred by memories of growing up in snowy Patagonia, took to the shoveling with great verve and passion. Non-traditional shovel designs proved more back-friendly. The shovel on the left, rescued from the curb years back, with an extra handle built in down near the blade, turned out to be very useful, and is something I never would have thought to buy. There's a design with a wheel that I hear is great for manually clearing driveways. 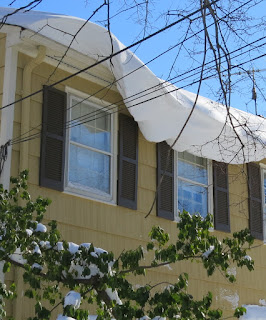 Our house acquired a wavy look, Gaudi-esque, reminiscent of that annoying curve my hair had in front when I was a kid. 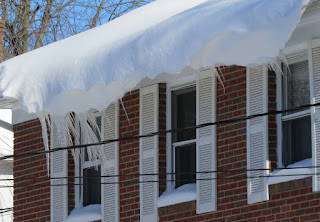 The neighbor's roof glacier carried icicles with it, looking a little scary and possibly suggesting poorer insulation in the attic, since a warmer roof would generate more snowmelt trickling down the shingles to the gutters, then turning into icicles. Come to think of it, the giant icicles remembered from childhood were probably an unheeded critique of the attic insulation. They looked great, though, and fed a boy's imagination.

Meanwhile, in the relatively natural setting of the backyard, snow could just be snow, neither annoyance nor burden, a beautiful, blanketing gift.

Snow and the Two-Faced Machines

The most beautiful thing about the 20 inches of snow that blanketed Princeton was not that our aging patio furniture got a fresh coat of elegance, nor the recycling of winter's meagre light as it bounced around the landscape. The most beautiful thing was that the blanket of snow brought with it a blanket of silence. What few cars ventured out Saturday were further muted by the snow beneath their wheels. 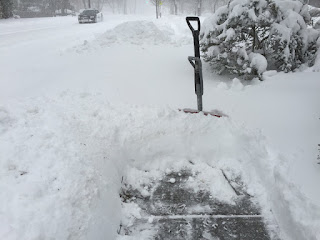 The first flakes of snow fell Friday night, as we emerged from August Wilson's The Piano Lesson at McCarter Theater. A day later, we could have used the rhythm of the extraordinary railroad worksong scene as we excavated the sidewalk. And the unaccustomed peacefulness of a Harrison Street without traffic brought back a couple climate-relevant lines from the play. In one, a railroad laborer describes the frenetic pace of travel in America's railroad heyday, with a train heading every direction one could possibly want to go, and the people he would sometimes see jump on a train without checking to make sure it was going where they wanted to go. He concludes from a lifetime witnessing all the helter skelter coming and going that just maybe it would "be better if people stayed in one place." It sure felt like that out on snowy, peaceful Harrison Street Saturday afternoon, in a world that is being taken by machines to a place far different than we would wish. The storm's an inconvenience, but it also brings a brief respite from a perilous status quo. Might we not be in so much of a hurry to return to the "normalcy" of pouring fossil carbon into the atmosphere? 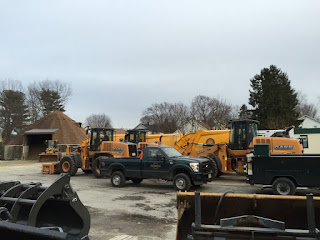 A couple days prior, I happened to photograph the machines that would later clear our streets of snow. A great and necessary service, and yet the two-faced aspect of machines, serving today's needs while foiling tomorrow's, brings back the other climate-relevant quote plucked from The Piano Lesson. Describing just how lacking in common sense someone is, one character says the man would "stand in the water and watch it rise until he drowned." That's a pretty good description of what we're doing, collectively, by seeding the atmosphere, decade after decade, until the oceans rise up to engulf the coastal cities. The machines are both faithful servants and radical climate revolutionaries, contributing to the overthrow of global stability. 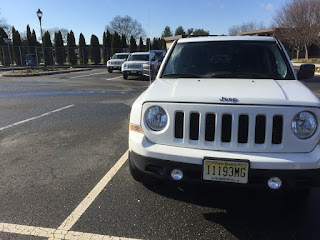 How to live with this greatest of contradictions? Some, in order to avoid feeling a great burden of crippling guilt, convince themselves either there's no problem or no solution. I take a pragmatic approach, seeking productivity and pleasure in ways that steadily squeeze out dependence on fossil fuels. For a town government, it would mean having machines for when they're needed, but steadily shifting policy to squeeze out the unnecessary uses machines are put to. We are all stewards of climate-changing machines that are doing a big favor for the planet, for future peace and present peacefulness, when they are sequestered in the parking lot. Our culture values the visual stimulation of movement, but there is beauty in the stillness of a parked car, or a landscape cloaked in snow.

The challenges imposed by the storm--the preparations, the shoveling out--also tend not only to bring out the best in people, but to bring people out, of their houses. Shoveling the sidewalk is when I tend to meet the latest set of tenants next door. Stories come over the internet of neighbors helping each other out. A storm could be a teachable moment, in which we discover that the machine-enabled restlessness known as the status quo is not necessarily the best place to be.
Posted by Steve Hiltner No comments: 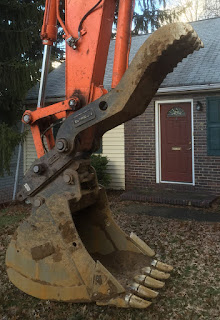 This is one way to discourage solicitations. Anyone thinking of walking up and knocking on the door will be inclined to move on down the road. 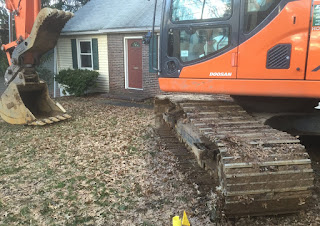 Hard to see the house for the looming machinery bent on destroying it. 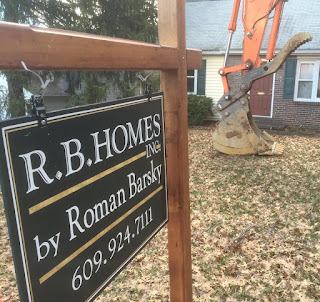 If Princeton's smaller homes are endangered, and with them the prospects for housing people of fewer means, might we want to promote some way for small homes, or even the so-called "tiny houses", to coexist among the proliferating giants? How do we accommodate young couples, or the elderly wishing to age in place, or people who contribute to society in less remunerated ways?
Posted by Steve Hiltner No comments: