The State of State Democracy in Trenton 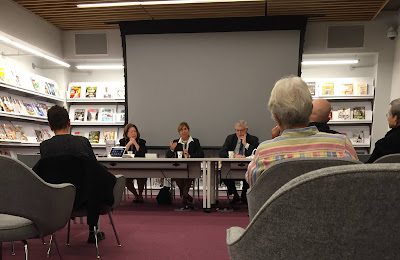 A sparse but engaged audience showed up to hear the good news that democracy is alive and well in Trenton. State government passes hundreds of bills meant to improve life in New Jersey, and a substantial number of those bills are initiated not by legislators but by constituents.

It was enough to make me think of calling Andrew Zwicker and Roy Freiman (our assemblymen), or maybe even our senator, Republican Kip Bateman, and offering some ideas. Frankly, I was surprised I could even summon their names, given the prevalent disconnection between voters and local representatives. It helped that my daughter had worked for Zwicker's first campaign, which he won by 78 votes.

We were advised that it's easiest to reach out to Assemblymen, since there are two covering the same territory as one senator, and there is added timeliness because the two representing Princeton are perched at the top of the ticket for November's election. The race between Democrats and Republicans for those seats tends to be tight, so every vote matters.

Ingrid Reed was the moderator who organized the event, bravely seeking to counter widespread apathy and cluelessness about the state government just down the road. State Senator Linda Greenstein spoke convincingly about how she had won elections by finding out who votes and then knocking on their doors. Making personal connections had gotten her on the ballot and over the top on election day. Former State Senator Jennifer Beck later questioned the utility of knocking on doors in an age when opponents can repeatedly deliver negative broadsides to targeted voters via Facebook. Former NJ Assemblyman Skip Cimino reassuringly spoke of factors that discourage corruption. A representative may try to condition support of a bill by demanding money for some project in his or her district, but granting such wishes can lead to others withdrawing the support they had offered without conditions. As a Republican in a Democrat-controlled state government, Beck was able to get some of her legislation passed by channeling it through supportive Democrats and giving them the credit. They said that a lot of power is concentrated in the legislative leaders, though the Assembly Speaker, Craig Coughlin, is good about seeking input from others.

Though I didn't ask about it, I'm puzzled by what seems like a disconnect between state and local government. For instance, why are manufactures allowed to make packaging out of a baffling variety of materials, and leave it up to the consumer to figure out whether it's recyclable or not? This lack of regulation greatly complicates our lives. And why does the state lay down rules on putting loose leaves and brush into the street, then "leaves" each town on its own to scramble, usually ineffectively, to live by the law. And why is the most visible action on energy the digging up of our streets by PSEG to lay new gas lines, when the urgent need is to break our dependence on fossil fuels?

Personal course of action: Vote, and look into it all more later.
Posted by Steve Hiltner No comments:

If you go to the American Water website and log into your account, you'll find under the tab "usage" a link called "usage overview". Click on that and it takes you to a graph like the one below. Click on the "Neighborhood Average Usage" box in the upper right and a green line will appear that compares your water consumption to the local average.

Below is what ours looks like. We use about 2000 gallons per month, which is less than a sixth of the local average. How do we manage this? We're empty nesters for one, but it's mostly a matter of valuing water, and understanding that every time you turn on the tap, you're consuming elaborately treated water that was pumped 20 miles uphill to Princeton, and that every bit of the water that goes down the drain then has to be elaborately and expensively treated at the Stonybrook wastewater treatment plant on River Road. That understanding makes us less cavalier about water use. Some easy strategies for reducing consumption are listed below the graph.

SAVE ADDITIONAL MONEY
Posted by Steve Hiltner No comments: