For years, this desk, bought for a pittance at a yardsale, lived a quiet life in my daughter's bedroom, covered with all manner of things, seldom actually used as a desk. Even when it was no longer of unuse in the bedroom and relegated to a garage filled with all manner of things and seldom used as a garage, it didn't give up hope. "Life is so strange", it said to its richly grained self. "Maybe it's preparing me to star in a dark comedy." There were days, though, as the dust grew thicker upon it, that it felt like it was fated only to take up space. It sent its photo to a used furniture store in town, but they weren´t interested. A pingpong table nearby told the desk, ¨Look, I only need slight repairs, and I´ve been in here two years. Sure, I was glad to be saved from the landfill, but when´s my second life going to start? I think we´re in here until they sell the house.¨

No one paid the desk´s wild dreams any mind, but desk dreams really do come true, for one day a young woman showed up to take the desk to Princeton University campus, where it now stands proudly on the Hamilton Murray Theater stage, ready to play a role as, surprise, a desk, in a student production of Speech and Debate. Other actors will get all the lines, but the desk will get more stage time. 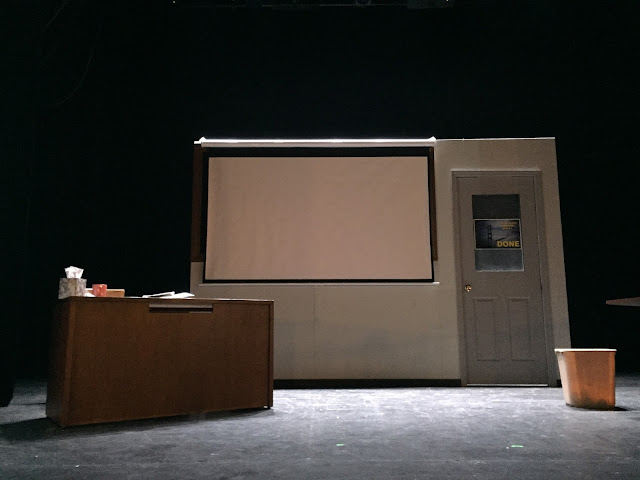 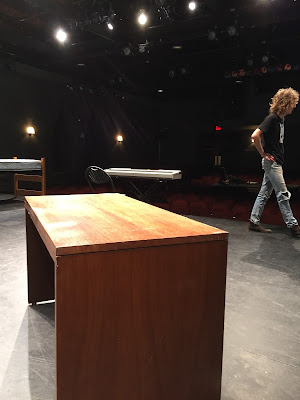 I was glad to see the desk get the break it so richly deserves. As the desk's agent, I tried to stipulate that the desk have a spotlight pointed at it at all times, but the stage manager, my daughter, refused to compromise artistic integrity to serve a stage prop's ego. We're hoping this could boost the desk's flagging career. Otherwise, it's back to the garage.

Three misfit high-schoolers form a Speech and Debate club in an attempt to reveal a sex scandal, unveiling their own vulnerabilities--at once hilarious and heartbreaking--along the way. Pulitzer-prize-finalist and Tony-award-winning playwright Stephen Karam presents a dark comedy with music about coming to terms with ourselves, others, and the terrifying hypocrisy of the adult world.
By Stephen Karam
Directed by Kyle Berlin '18
February 24 @ 8 PM
February 25 @ 8 PM
February 26 @ 2 PM
March 2 @ 8 PM
March 3 @ 8 PM
March 4 @ 2PM
March 4 @ 8 PM 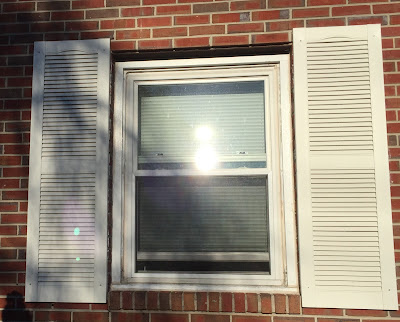 Walking in front of a rental house two doors down, I suddenly felt a blast of radiant heat on my right cheek. I looked around, wondering where it was coming from. Ten feet away was a window, reflecting the afternoon sun. Either the window pane or the white shades inside were reflecting back intense solar energy. Multiply that by however many times larger the window is than my face, and you get a sense of how much free heat is being reflected away from that house. While free heat is being rejected, the gas furnace is laboring to keep the house warm, and more fossil carbon is slipping up and out of the chimney. Discontent with nature's subtle power and inconsistency, we turned long ago to the now discomfiting comforts of machines.

How deceptive it all is. The climate changing pollution seeping out of Princeton's chimneys and exhaust pipes is silent, invisible, odorless, unintended, and the winter sun, hunkered down low in the sky, seems an improbable source of heat for a home. 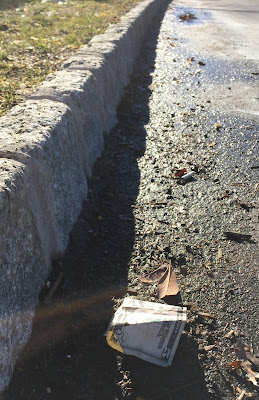 What's being lost is as covert as a $5 bill slipping from a pocket, noticed only by someone out and about, open to serendipity, who happens by the right spot at the right time.
Posted by Steve Hiltner No comments:

A Small Victory: Reaching Out To Companies About Their Products

This is a time to be thankful for small victories, and also to reach out to those beyond our bubble.

But first, a joke, heard yesterday, about a couple who collect cars. The husband tells his wife, "Honey, I'd like something shiny and black that goes from zero to 250 in two seconds." "Sure", said the wife, who then went out and bought him a bathroom scale.

We had an Escali bathroom scale stop working after about ten years, and because we liked it so much I reached out to the company. It turned out to be a great lesson for the kids. A company representative responded immediately to my email, offering to replace it for free if I filled out a form. There seemed to be a catch, because the form required a receipt, which of course we are not organized enough to have kept. Initially discouraged, I later emailed back, explaining that the receipt was long gone. To my surprise and delight, the rep responded that that was not a problem. Just send a photo of the model number on the back.

Within a week, the new scale showed up on our doorstep. The kids were impressed, and so was I. 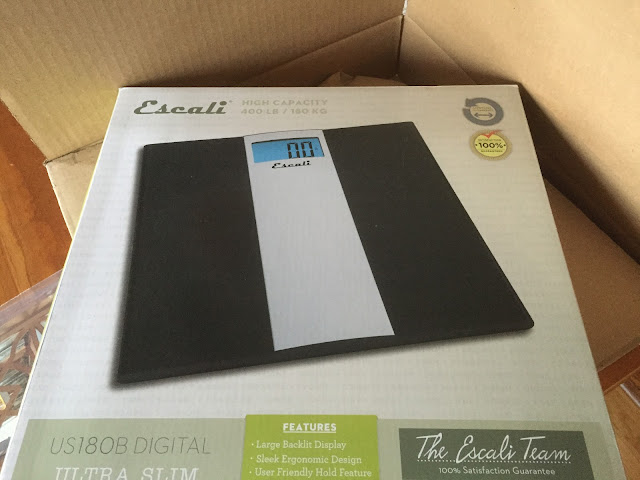 The only downside is that the old scale needs to be thrown out, or perhaps recycled as electronics. Knowing this, I had given the old scale ample time to repair itself before reaching out to the company--a month or two sitting on the shelf in the family room. This was not completely irrational. Self-repair had worked in the past, with a garbage disposal and some other items.

Thanks to "The Escali Team" for standing by their product. 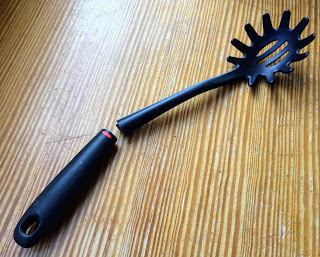 Next up, that Oxo brand spaghetti server, though at $6.95 it's more a matter of principal and curiosity.
Posted by Steve Hiltner No comments:

Rain Barrels are a Drop in the Bucket

One oft-mentioned way to "go green" is to buy a rainbarrel to collect water from your roof. There are a few things you should know. I write this as an advocate for capturing and utilizing the runoff from roofs, driveways and uphill neighbors' yards. There's a role for rainbarrels, but it's often overstated.

First, a bit of calculation shows that a 2000 square foot roof captures 1250 gallons of water from a 1 inch rain. Divide that by four downspouts, and you have about 300 gallons coming into the rainbarrel in a modest rain. If an average rainbarrel holds 50-75 gallons, most of the water will not be captured. The percentage caught will be even lower if the rainbarrel still has water from the previous rain--likely, given that people tend to forget to use the rainbarrel water in their gardens.

So the question becomes, is the rainbarrel really making a difference, or is it just adding to the amount of "stuff" in the world? I have a rainbarrel--rescued from a dumpster and retrofitted with a screen to filter the incoming water and keep out mosquitoes--but the water doesn't get used much, so I just leave it on slow drip, to let the water empty out before the next rain. Attaching a soaker hose is another way to slowly release the water into the garden.

Unless you're really going to use the water, it can be more aesthetic and consequential to direct the roof water into swales or concave raingardens that can accommodate the hundreds of gallons generated. Or, if you're serious about catching and using water, check out this system at the West Windsor Municipal Center. It looks like it holds a couple thousand gallons. 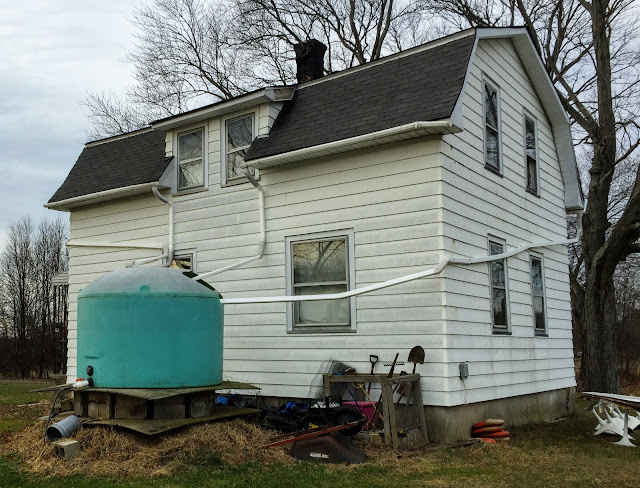 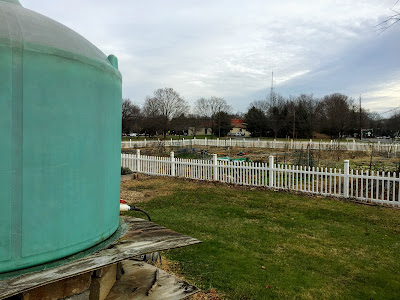 The giant rainbarrel (you can get these at farm supply stores) is raised up to add pressure to the gravity feed over to what looks like a community garden. 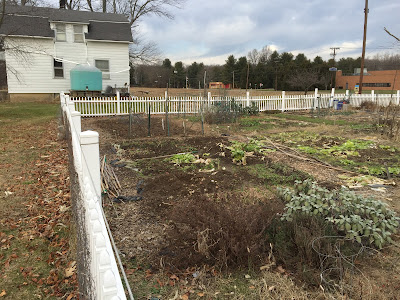 It's fun to see a 1970s counter-cultural dream come to life on municipal land in the 21st century. The central concept was easy living by working with nature. We'd store the rain from the sky, capture nitrogen from the air by planting legumes, use mulch to discourage the weeds; and interplant to make full use of the sun's gift of energy; then sit back and watch the garden grow.

Implementation was not always perfect. In Durham, NC in the 1990s, realizing that one small rainbarrel wasn't catching much runoff, I picked up a dozen 50 gallon drums from the local Coca Cola plant, washed out the dregs of syrup, then drilled holes to connect them in series. They weren't very aesthetic, and the 220 gallon plastic cisterns I bought at a farm supply store to replace them with didn't exactly blend into the landscape either.

These experiences led to dreams of bladder-like rainbarrels that would deflate when empty--far more efficient to transport from factory to home. After a big rain, they'd bloat like a Michelin Man in a tire commercial, but would shrink down behind the shrubbery at the base of the house's foundation inbetween rains. That was the dream, and it's nice to see that these now exist, under the name "rain bladder". Though they are pricey, that could change if they became standard installations on homes. 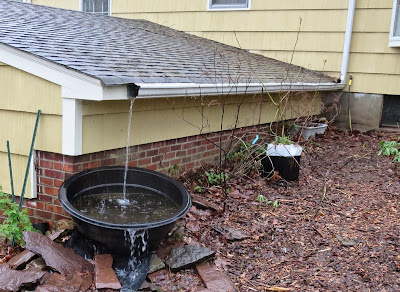 Another alternative to the standard rainbarrel is what I call a "fillable, spillable minipond", basically a black tub placed under a downspout, which in turn overflows into the yard. It provides open water that's nice to dip your hands into while working in the garden, and a blank canvas for nature's crystalline creativity in the winter. The tippable aspect proves handy if mosquito wigglers appear.

After all the experimentation, the cheapest and most aesthetic approach to capturing and slowing down runoff from our home and driveway turned out to be the yard itself. Some downspouts send water flowing across the lawn, or into a shrub boarder, or into concave raingardens that accumulate a few inches of rain that then seeps into the ground over a day or two. (We have miniponds, too, dug deeper for extra capacity, but the attractive open water requires special attention to discourage mosquitoes.) With the help of some low berms and hollowing out here and there, the yard itself becomes the bladder, and the ground, rather than the rainbarrel, becomes the reservoir that deep-rooted plants and trees can draw on during droughts.

The little rainbarrels can still play a role, but compared to all the water a roof generates, and the potential holding capacity of a yard, they really are a drop in the bucket.