Remember all those nice sounding goals to reduce greenhouse gas emissions by this or that percent by such and such a year? Whether it's 50% reduction by 2050, or 80% reduction by 2020, or 100% reduction by 2100, the numbers were meant to stir action, but instead serve as place holders for good intentions while life goes on as usual.

Princeton's contribution to goal setting came in 2007, when mayors Miller and Trotman signed the Mayors Climate Protection Agreement to reduce greenhouse gas emissions by 7% from 1990 levels by 2012. Though the founders of Sustainable Princeton got some potentially useful data for 2006, no one knows how much energy Princeton used back in 1990, and no one's looking at how much energy we're using now.

Numbers matter, particularly those that slowly build and build, just below the radar screen of the news media until suddenly we have a brand new crisis on our hands. In an effort to at least track some of Princeton's contribution to a global problem, I looked into how we could get numbers from PSEG for Princeton's consumption of electricity and natural gas. It turns out that PSEG can provide these numbers back to 2007. With some help from municipal staff and the chair of the Princeton Environmental Commission, I was able to gather all the information needed by PSEG for them to provide energy use data for Princeton's residential, business, industrial, public school and municipal sectors.

Now it's a matter of waiting until PSEG provides the numbers.
Posted by Steve Hiltner No comments: 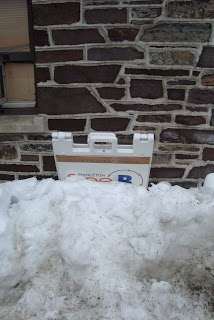 In Princeton, it's possible to travel to farflung places without getting in a car. I have tested this a couple times, most recently back in February, for a trip that included four trains to get to the Philadelphia airport, one plane, and another train to get within two blocks of my destination in downtown Cleveland. The trains to Philadelphia are well-timed so there was very little wait inbetween.

When I returned, using the same combination in reverse, I arrived at the Dinky station at 5pm--what seemed like an auspicious time to catch the FreeB shuttle (click to follow link). That would have dropped me just a block from my home--truly a public transit advocate's dream. But the sign was buried in a snowdrift, and I couldn't find any schedule posted, so asked a woman who also seemed to be waiting for a shuttle. 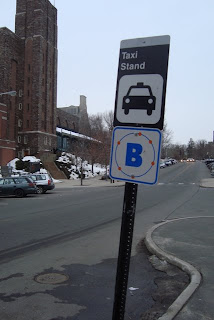 She was waiting for a Tiger Transit shuttle, and was checking the website with her cellphone to see if one would arrive soon. Turns out the public is welcome to use Tiger Transit shuttles at no charge (that's what one university rep told me, anyway.) And you can even track their movements on TigerTracker, which could prove to be even more exciting than reality TV, and more useful. One of their routes appears to reach within a short walk of the Windsor Green Shopping Center (Whole Foods, Staples, etc.) out along Route 1.

Not knowing when the FreeB might arrive, or if it even still existed, I ended up making the mile and a half walk home, which in scenic Princeton can be a pleasing thing to do, even with a suitcase in tow.

A 2009 post on the FreeB can be found here.
Posted by Steve Hiltner No comments:

Arts and Transit Neighborhood Letter To the Editor

The Dinky has been giving Princeton quite a ride, in more ways than one. Though I ride it occasionally to get to the main line, I had been avoiding hitching a ride on the debate over its 460 foot move to a new station as part of the university's proposed Arts and Transit Neighborhood. Given how much community brain power was being brought to bear, the Dinky's dilemma was sure to be propelled to a win-win solution.

That the result was, and may still be, looking more like a lose-lose shocked me into seeking out opinions. The result was a letter to the Princeton Packet and the Town Topics, and the page of Dinky Q and A above, accessible via the tab entitled "The Dinky Debate".

Below is the letter:

Catch a ride on the Dinky opinion train and you will find that, like the Dinky, it sweeps you vigorously from one terminus to the other, with no stops in between. Respected friends will have opposite views, delivering you either to the conclusion that a rail line really should reach up to Nassau Street, or that the best chance for sustaining the Dinky is to move it 460 feet down the hill, as the university now says it will do, regardless.

The debate about the university’s proposed arts and transit neighborhood would be greatly expedited, and needless ill will avoided, if people would look at the university’s proposal as a whole, not just one aspect. The Dinky, though its horn sounds like a cross between a tugboat and a mourning dove, has taken on the qualities of an elephant being intently scrutinized at too close a range. Some aspects of the beast that I’d like to mention are these:

The 460 Feet: Having made the locally famous 460 foot, two minute walk to the proposed new Dinky station location, I found it to be a surprisingly minimal change. For those parking at the nearby Lot 7 university garage (free to the public after hours and on weekends), the new location will actually reduce the walk by that same 460 feet. Though the university plan would lose the appealing interface with University Place, it offers improvements for traffic congestion, parking access, and train station facilities.

Extending tracks to Nassau Street: If extended to Nassau, as would reportedly still be possible via Alexander if the university’s proposal goes forward, the Dinky or any other heavy vehicle (“light rail” is not necessarily lightweight) will encounter steep inclines that could substantially reduce energy efficiency compared to the current relatively flat route. The combination of steep inclines, longer route, more stops and interactions with streets could affect the most important factors determining Dinky ridership: dependability and frequency. Though a train stop on Nassau Street has symbolic power, even with more downtown density most Princetonians would still live well beyond the 10 minutes people are supposedly willing to walk to a train stop.

It’s important that we defend town traditions and dream of an even better Princeton. Sustainability, whether environmental or in reducing the Dinky’s dependency on state subsidies, is a vital part of any vision for the future. The danger comes when the strong sustainable, cultural and civic aspects of the university’s proposal are ignored due to focus on 460 feet. Nor is it fair to delay the university’s vision for years while the serious logistical and budgetary challenges of alternative proposals are indefinitely explored.

If people agree on a foundation of facts as they can best be determined, look at the big picture, and are as skeptical of their own opinions as those of others, then there’s hope this four-year opinion ride can finally pull in to a pleasing destination.I have assembled a summary of information about the university proposal and the Dinky at http://princetonprimer.blogspot.com/p/dinky-debate.html.
Posted by Steve Hiltner 4 comments:

A fine series of upcoming performances and movies at the Princeton Arts Council includes a free performance by top-flight jazz musicians this Sunday. Info from the Arts Council website below: