Ciclovia, Ciclovia, where have you been? We've missed you. Ever since meeting you for the first time last year, down on Quaker Road. You made us feel free. You made us feel like there's a future. A road not pumping more fossil carbon up into the atmosphere for a whole afternoon. And such a beautiful name. Ciclovia, the Greek goddess of the open road. Or maybe she's Columbian, since Wikipedia says she shows up in Bogota and other cities every Sunday.

So venture on down, past Einstein's house on Mercer St, past the Princeton Battlefield, past the Friends School. Take your bike, your stroller, your unicycle, roller blades, whatever, for a spin on Quaker Road, which will be car-free from 1-4pm.  Updike Farm's giant mulberry tree may have some mulberries left. Check out all the programming, which includes some opening remarks by the mayor, an hour of swing dancing (on bicycles?), tours, and I think they've arranged for Nature to stop by with some fine weather. 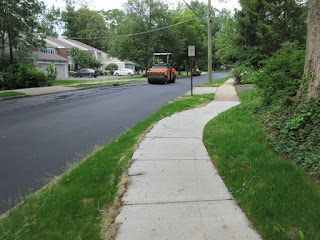 How does Alexander Hamilton do it? 260 years old, and his skin is smooth as a baby's bottom, or at least it is now, since Hamilton Ave. got resurfaced. And now I hear that Alex may be getting hitched up with a lady friend of considerable distinction on the ten dollar bill. And check out his jazzy sidewalks that dance around tree trunks. 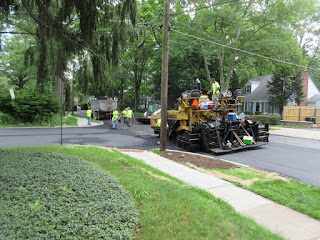 Cars and bikes will founder no more on our founding father's potholes, now that they've been shaved down and covered over with a silky layer of blacktop. Our car tires made a different sound while rolling over this dream surface, and at least one roadside resident has noted a marked improvement in sleep.

During the anguished discussions over whether to include bikelanes as part of the renovation (thanks for the democracy, Alex!), some questioned how many bicyclists would actually use the street. Once word gets around, even those who haven't been in the habit of biking will dig their bikes out of the back of the garage, pump up the tires and take a spin, just to experience true smoothness. 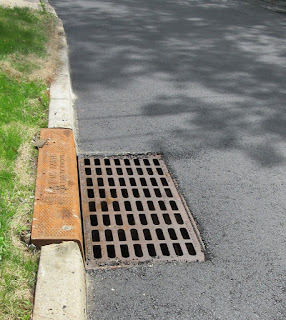 And the detailing. Smooth grading around stormwater outlets makes a big difference for bicyclists hugging the curb.

It looked like the job was contracted out. I was surprised to hear that public works crews sometimes do these resurfacings, and that doing the work in-house can cut the considerable cost in half. But it depends on whether the necessary skill sets are present among the staff, and whether the town's road equipment is in good repair. The extra expense, it's been asserted, might be worth it if a contractor who specializes in road resurfacing does a better job that lasts longer. I saw town staff out there in the early stages, repairing the stormwater outlets. Maybe it was a mix of in-house and contracted work.

In any case, congratulations to Alex on a facelift worthy of a Founding Father.

A brief letter to the editor in the Town Topic's Mailbox section last week asks the question: Why can't Princetonians recycle all plastics? I went to the Princeton recycling website, which has lots of useful information, including a link to the county website--the county being the one that administers curbside recycling in a lot of towns around here--and sure enough, it says that we're supposed to recycle only plastics #1 and #2.

That's odd, because the rollcarts used for recycling by businesses downtown, collected by Waste Management, say to recycle plastics #1-7, and if you check what's recyclable in other cities and towns elsewhere in the country and NJ, you'll find they're collecting most or all plastics.

So what gives? I researched this in 2012, and wrote an OpEd and some blog posts detailing the results. One post describes the curious controversy that developed when I published my research in a Princeton Packet OpEd. Another describes a visit to the plant where our mixed recyclables are separated out. Others can be found either by going to the pop-out "labels" section on the right of the screen, or typing "recycling" into the search box.

My research, and the reaction to it, taught me as much about people as it did about recycling. As with human-caused climate change, recycling is not inherently controversial or polarizing, but is made so when someone's ego or ideology gets caught up in what really should just be facts we can all look at and draw sensible conclusions from.

Pride in what Princeton does environmentally should not get in the way of acknowledging that there are many ways in which curbside recycling could be improved. Begin with the round, uncovered green and yellow bins. If they're stored outside, as many people do, rain makes the paper heavier, and water collects in the cans and jars inbetween pickups, providing breeding habitat for mosquitoes. Heavy winds on recycling day send paper and plastics flying out into the street, where they get washed into our waterways, and the circular bins sometimes roll out into traffic lanes, creating a hazard. If we cared about clean streets and clean waterways, might we want to do what most recycling programs do and switch to rollcarts, which are larger, covered, and don't roll around? Rollcarts also have wheels, which is an advantage for the less muscle-bound residents trying to drag their rain-soaked recyclables to the curb. All of this is in the county's hands, since it administers the program.

Like yardwaste collection, curbside recycling makes clear people's desire for simplicity. Many or most people put all types of plastic out for recycling, rather than scrutinize each plastic container for its identifying number. Similarly, the complex yardwaste collection schedule, with five zones and seasonal shifts in service, is widely ignored in favor of putting yardwaste out on the street whenever. Robocall reminders seem to be helping with the latter, but in general the best collection policy is the one that's the easiest for residents to follow.

My research showed that most of the plastics end up getting recycled, even the ones we're told not to put in. There was a rumor recently that the official policy might change to reflect that. Where there are rumors, there is hope.
Posted by Steve Hiltner No comments:

That Pesky FIOS Beep in the Basement

Every now and then, a beep begins to emanate from the basement. The first time it happened, I couldn't find the source, because the beep sounded only once every fifteen minutes or so. If I ignore it for a few days or a week, it begins to represent in my mind entropy's gradual nibbling away at the edges of life's order. 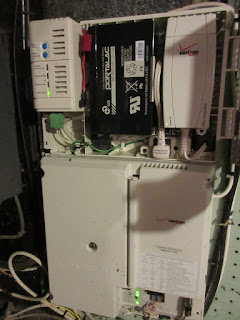 I finally tracked it back to the FIOS box. That's the box they install when you get Verizon FIOS service.

A similar post two years ago explains how to stop the beeping. You may be tempted to go out and buy a new battery, since that's what the beeping and the red light is signaling you to do, but that's not really necessary. The battery is slowly getting more eccentric. Fixing the problem no longer involves just unplugging and plugging back in the red wire. Now I have to unplug, then pull the battery out, put it back in again, then plug the wire back in. There's no obvious sense to this, other than it works.

Another previous post explains the box's contribution to your "vampire" energy use.
Posted by Steve Hiltner 1 comment:

Circus This Weekend in the Park

Check out the free performance this Friday and Saturday of Circus in Wonderland at Pettoranello Gardens, 6-8pm, June 12 and 13. Just off 206 at Mountain Ave, Pettoranello Gardens is a lovely spot to see the Stone Soup Circus folks, who are now launching an initiative to bring the positive, transformative energy of circus to Trenton.
Posted by Steve Hiltner No comments: