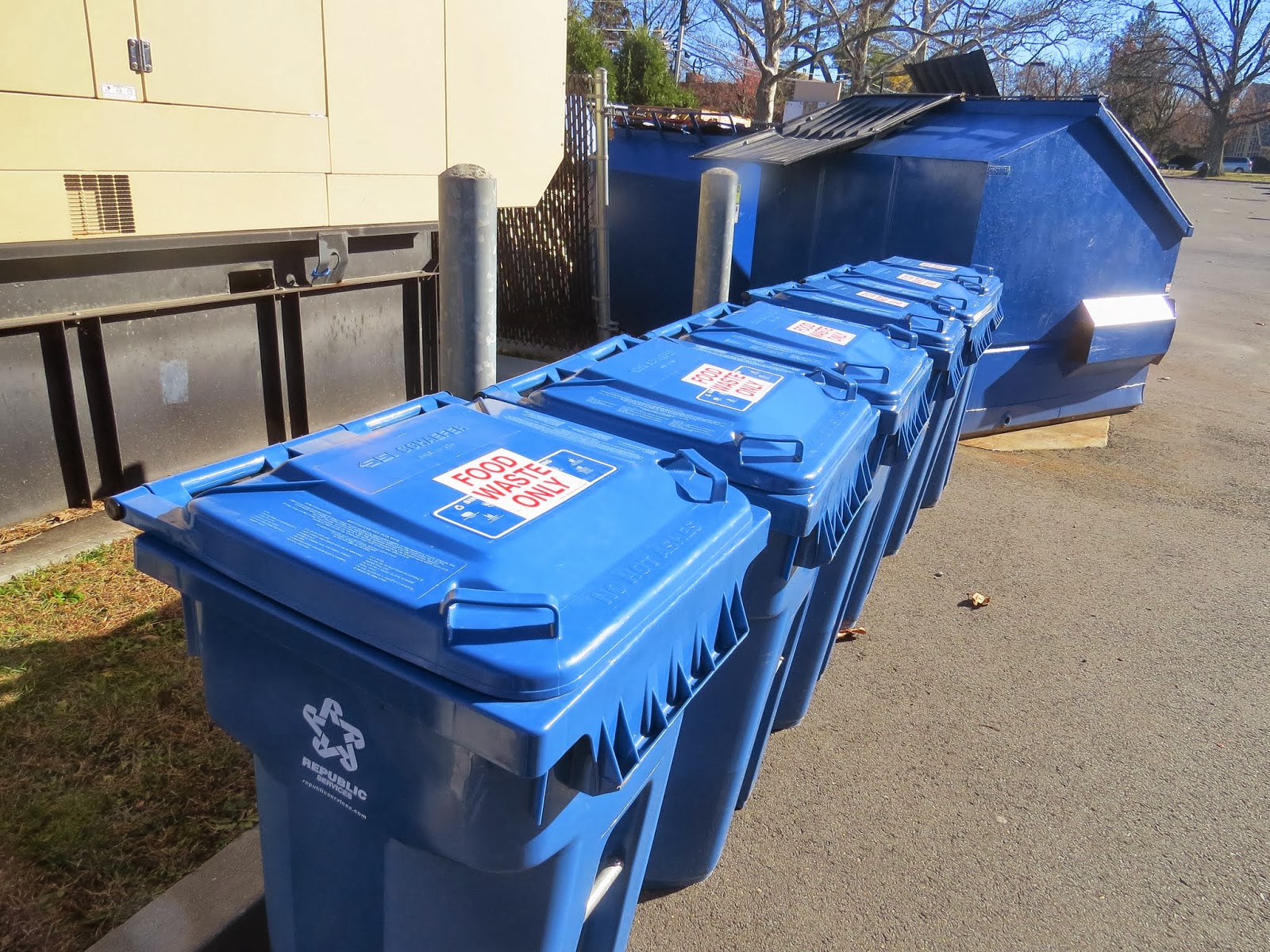 Earlier in the fall, some rollout bins labeled for foodwaste showed up behind the Princeton High School. I had heard that foodwaste recycling was going to begin at the public schools, but the bins remained empty. Finally, I emailed superintendent Judy Wilson to ask what was up. A response came from facilities head, Gary Weisman, a week later:

"In response to your recent inquiry regarding food waste recycling at PHS, I wanted you to know that the program is underway and has been for the past few weeks. The bins have been on-site since September, but there were many factors that caused us to delay implementation. All schools are currently on board, but no one should be under the illusion that the ongoing implementaton will be seamless. However, with the support of our administration, custodial staff, aides and students we are hopeful that the program will quickly become part of our normal routine." --Gary Weisman, Dec. 2

Since then, plastic bags (presumably compostable plastic) of foodwaste have begun to show up in the bins. The opportunity here goes beyond saving some money by reducing the amount of trash headed for the landfill. One of the biggest lessons kids can learn is the cumulative power of our individual actions. Each individual's impact seems too minor to be concerned about, but if multiplied by everyone else doing the same thing, the result is game changing.

Though this philosophy is drilled into athletes, it's in everyday life that the game is being played for keeps. The cumulative impact of individual actions--like recycling, voting, and how much carbon we pump into the atmosphere--determines what sort of future we will share. If one student throws non-compostables in the cafeteria compost bin, the custodians are likely to toss the whole contaminated bagful into the trash, sabotaging everyone else's efforts to make the system work. Everyone has to assume responsibility and pitch in. Foodwaste recycling will be toughest at the high school, where students are allowed to eat lunch anywhere in the school. That dispersion and general lack of supervision makes it all the more important that an ethic of recycling be promoted and sustained, lest cynicism grow about whether the high school's recycling program is actually functioning.

What I've heard from conversations with staff fits with my experience back in 2007, while helping get recycling restarted at the public schools. Success is most assured if there's someone at the bin in the schools' cafeterias, ingraining new habits by making sure students throw their scraps and other waste in the right bins. This is essentially the role a coach plays with a sports team. The compost bin needs to be paired with the recycling and trash bins, so students don't have to walk extra steps. Signage has to be clear, both in word and, for those too distracted to notice labels, the "body language" of the containers. There has to be monitoring out back to make sure the after hours custodians aren't just throwing everything in the trash dumpster. To overcome cynicism, there needs to be feedback and updates so students have some assurance that what they are dutifully throwing in the recycling bins is actually getting recycled. Because it's so easy for recycling programs to fall apart over time, someone in each school with passion for recycling needs to be designated to monitor the program over time.

Above all, the administrators have to lead, to send a message repeatedly to staff and students that recycling matters. Otherwise, everyone will take silence to equal indifference. Recycling is not something peripheral to the educational experience, but central to the individual's understanding of his/her place in the world and impact upon it. It's a habit students can learn and carry with them for a lifetime.

In sports, there's a coach, and someone keeping score. Recycling is essentially a sport being played without any ongoing coaching for the individual players, and without a score at the end of the week (e.g. pounds of foodwaste diverted from the trashstream) that people can take pride in or work to improve.

More tips on making recycling work in the workplace can be found at this link.

For information on how foodwaste may in the future be hauled to Trenton for composting and biogas production, rather than to the current composting site an hour away in Wilmington, links here and here are a start.

Who's Making the Snowmen? 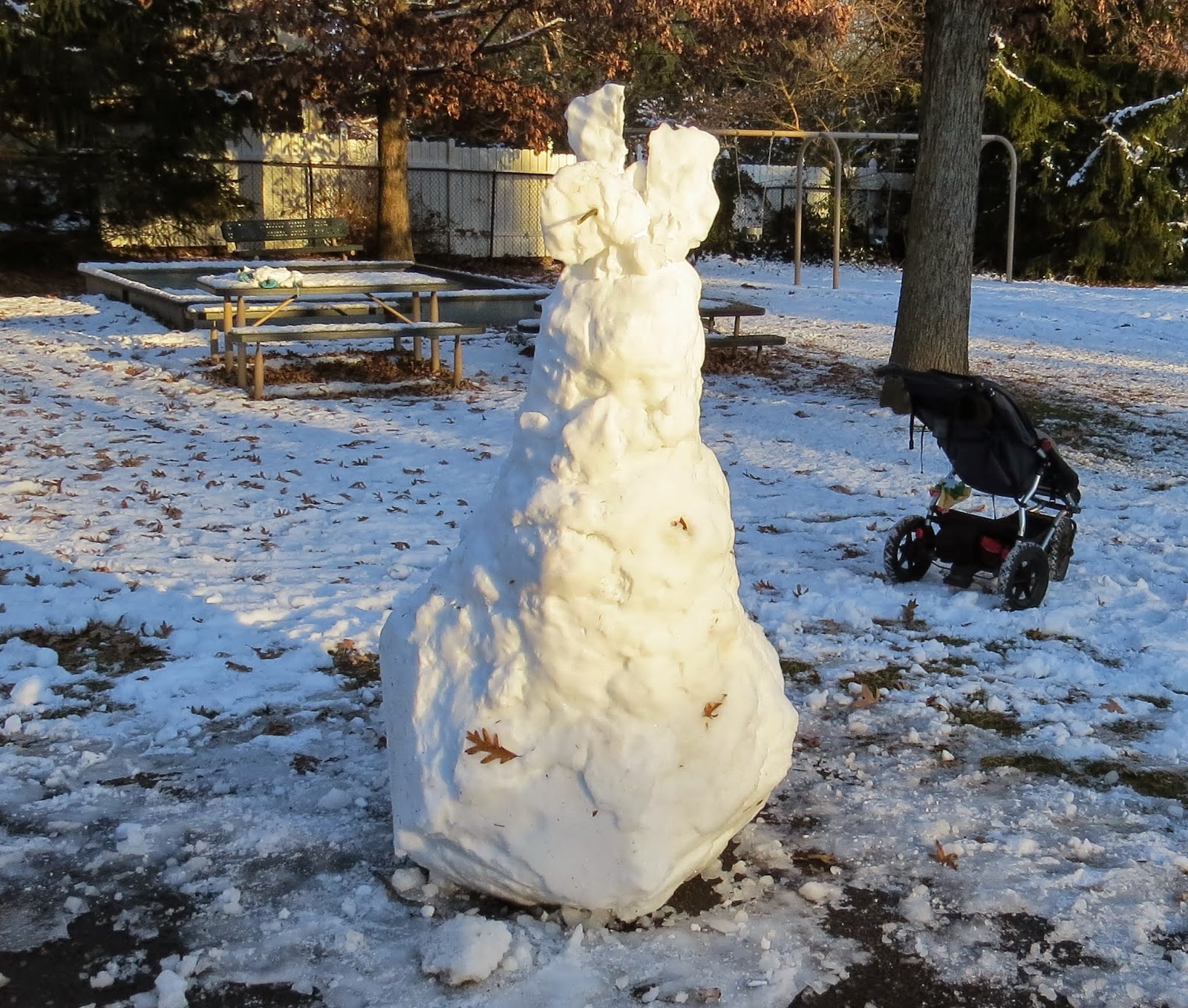 How nice. A snowkangaroo (best guess) in the park. 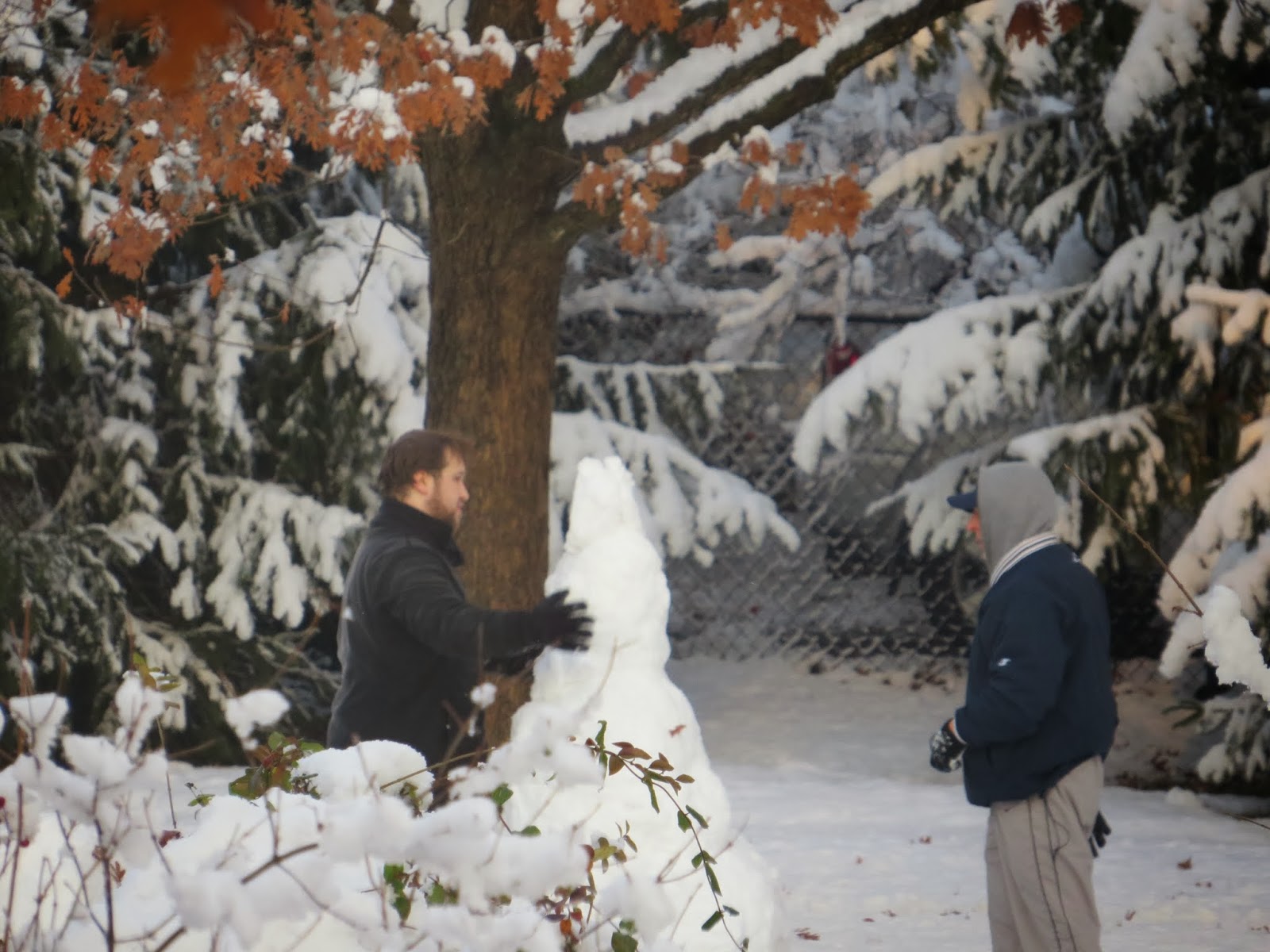 But wait a minute. Isn't it the kids who are supposed to be building the snowbeings, not the parents? Really kids, you can't expect the parents to house, feed and clothe you, drive you to school, and then go to the park and play for you as well. It's too much!

So come on kids. Time to step up. Put down those cell phones, find some boots and mittens, step outdoors and get busy. If you haven't done it for awhile, don't worry. It's just like riding a bike.
Posted by Steve Hiltner 1 comment:

Our pediatrician called the other day to give advice on whether our daughter should get vaccinated for Class B Meningitis at Princeton University. The answer was an emphatic yes. Turned out the pediatrician's son was one of those who contracted the disease this year. It's a serious disease, with a ten percent mortality rate even when treated. It can take weeks or months to recover.

Also from our pediatrician: The vaccination is given in two doses, with one given Dec. 9-12 and the other in February, 2014. There are fewer cases of Class B meningitis in the U.S. (200/year) than elsewhere in the world, which is one reason why the vaccine has been approved in Europe but not yet here. The vaccine has been well tested abroad and is truly not experimental.

An interview on the radio program Here and Now answers many questions relevant for Princeton. The University of California in Santa Barbara has also had an outbreak, with four students getting sick, one of whom had to have both feet amputated. The doctor interviewed said that the campus outbreaks are related to the crowded conditions typical to any campus, and that there is little threat that students will spread the disease outside of the campus environment.

An email from the university to parents of students provides a similar take, saying there are no travel restrictions recommended for students, and that the surrounding community can continue to attend events on campus. Below are some excerpts:


The CDC and state health officials recommend that classes and activities at Princeton University continue as planned, and the surrounding community can continue to attend events on the campus. They do not recommend any travel restrictions for members of the University community. The bacteria are not spread by casual contact or by simply breathing the air where a person with meningitis has been, and there is no evidence to suggest a risk of spreading the bacteria by touching surfaces.

Students, including those who get the vaccine, and other members of the University community should continue to pay increased attention to personal hygienic practices and remember these important points about meningitis:

Email ThisBlogThis!Share to TwitterShare to FacebookShare to Pinterest
Labels: health

This from the Princeton Environmental Film Festival:

"Student filmmakers ages 12-24 you may now submit entries to the 2014 Princeton Environmental Film Festival (PEFF) NEW short video contest. Make & send videos that focus on sustainability, its related topics, and life perspectives. Videos can be serious, thoughtful, or comic, and will be judged on their creativity and uniqueness. They should be under three minutes long. Selected videos will be showcased at the PEFF (on Saturday Feb. 8, 2014 ) and one grand prize winner will receive a GoPro Camera."

To enter go to: www.princetonlibrary.org/PEFFshorts
Posted by Steve Hiltner No comments:

Easy Fix For a Broken Zipper 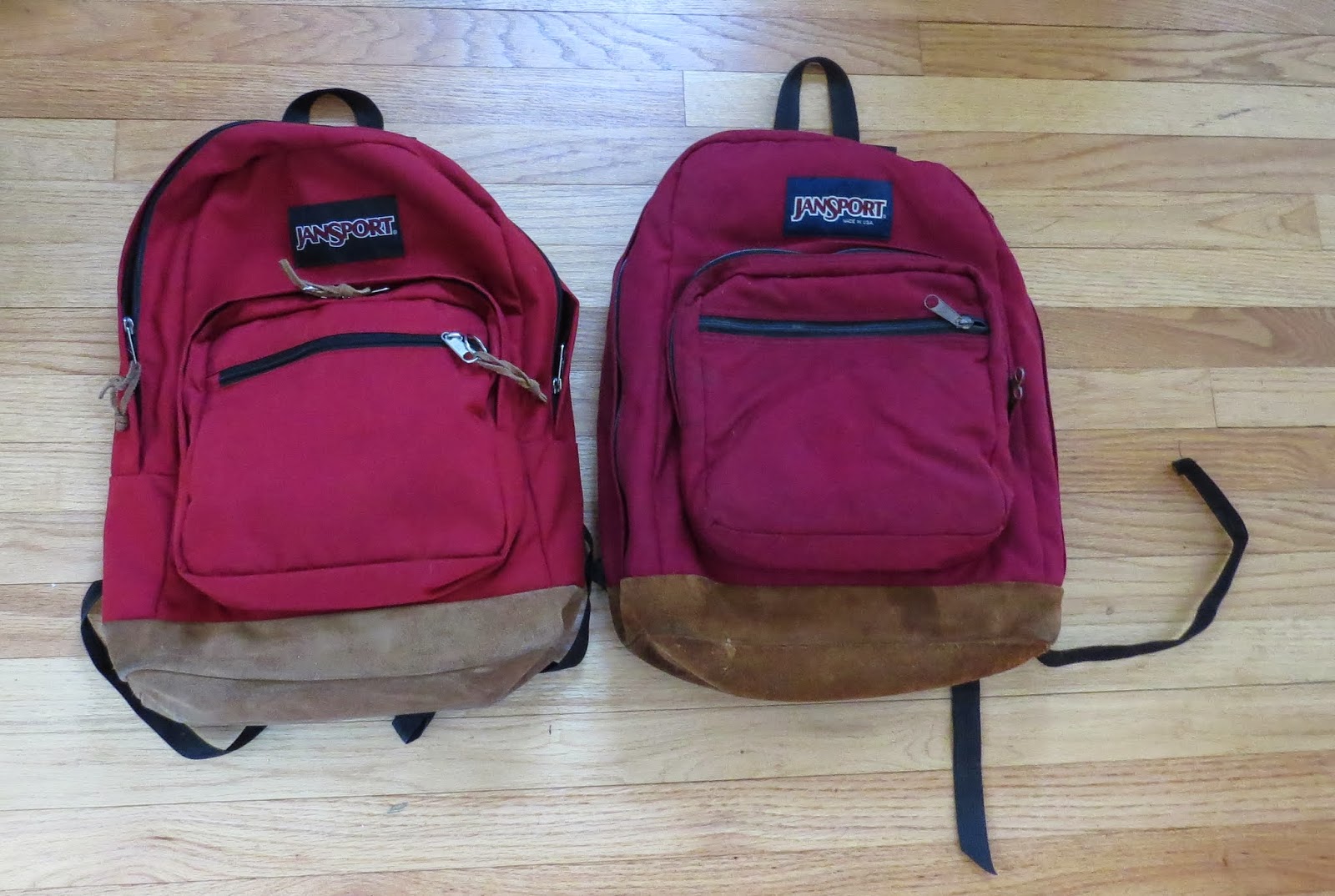 Another post from our repair empowerment team:
When my daughter needed a new backpack for school, she wanted one similar to her older sister's, but the online store was out of the desired color. The internet had failed us, but the local Kurbside Kmart came through. With uncanny serendipity, a backpack with the same make and desired color appeared on the curb just around the corner from our house. It looked fine, but we soon discovered a problem. One of the zippers wouldn't zip. The teeth didn't close behind the zipper but remained open.

I went to our handy local Sew Vac Center (three blocks away at the Princeton Shopping Center) and bought a zipper and some thread. While searching the web for insights into hand-sewing zippers (a daunting task), I came across a youtube video that showed how to fix the old one. One well-aimed squeeze of the pliers was all it took to make the zipper work like new again. I made this simple fix several weeks ago, and the zipper is still working.
Posted by Steve Hiltner No comments: