Recycling at Jadwin Gym Still Looking For a Win 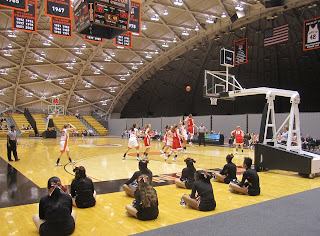 At Jadwin Gym last night, the Princeton women extended their winning streak to five, beating Cornell by a 2:1 margin.

The cheerleaders look very confident this year as they build themselves into high pyramids and come falling back to earth knowing someone will be there to catch them. 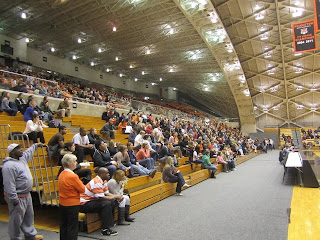 The audience got an "A" for attendance. 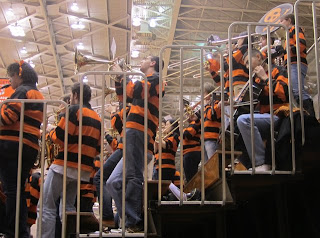 Tigers in the pep band were kept well caged. The band was particularly notable for its unusual instrumentation, with bagpipes (not in  photo), cello and a bizarre brass instrument or two. 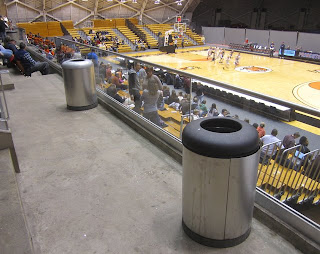 But what's this? Looks like someone has dropped the ball with the trash and recycling. Time and again, recycling containers were left unguarded by trash cans, insuring a mixing of trash and recyclables. And the nearly look-alike cans required close inspection to tell which goal was which. 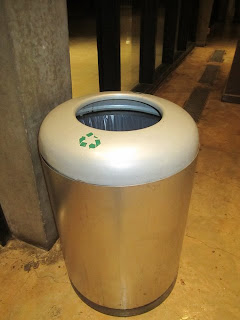 Most of the players were out of position and lacked a winning attitude. Those in the lobby gave mixed signals of the "I know I say recycle but really I'm for trash" variety. 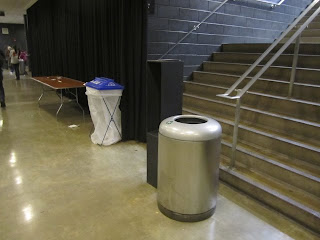 Fundamentals are SO important. Rule number one is pair each recycling bin with a trash can. I know that in basketball the opposing baskets are spread apart, but in the game of recycling, trash and recycling receptacles need to be TOGETHER. 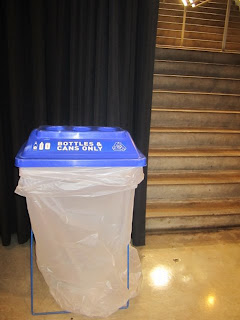 And their best player, clearly labeled and with small holes on the top to discourage trash, was off to the side where no one would use it--a needless waste of talent. You've GOT to recruit more containers like this one and position them in key spots, like at the top of the stairs. People will be going for the hoop with their empty gatorade bottle at the first receptacle they encounter on the way out. By the time they reach the lobby, it's too late. Control the lanes. That's the way to win at recycling. 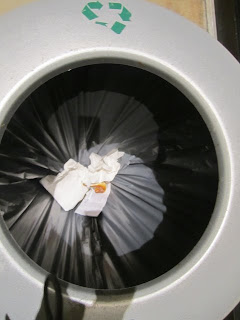 Here are some ideas for a winning strategy:

Note: Ten recommendations for starting and sustaining a successful recycling program in the workplace can be found here.

Note, 2.25.12: There's also a recycling container that looks like a bottle. The university has, or at least had, one of these at the football stadium. One supplier sells them for about $90 each. From the photos, it looks like companies like Coke and Pepsi might provide these at minimal or no cost, with their logo attached.