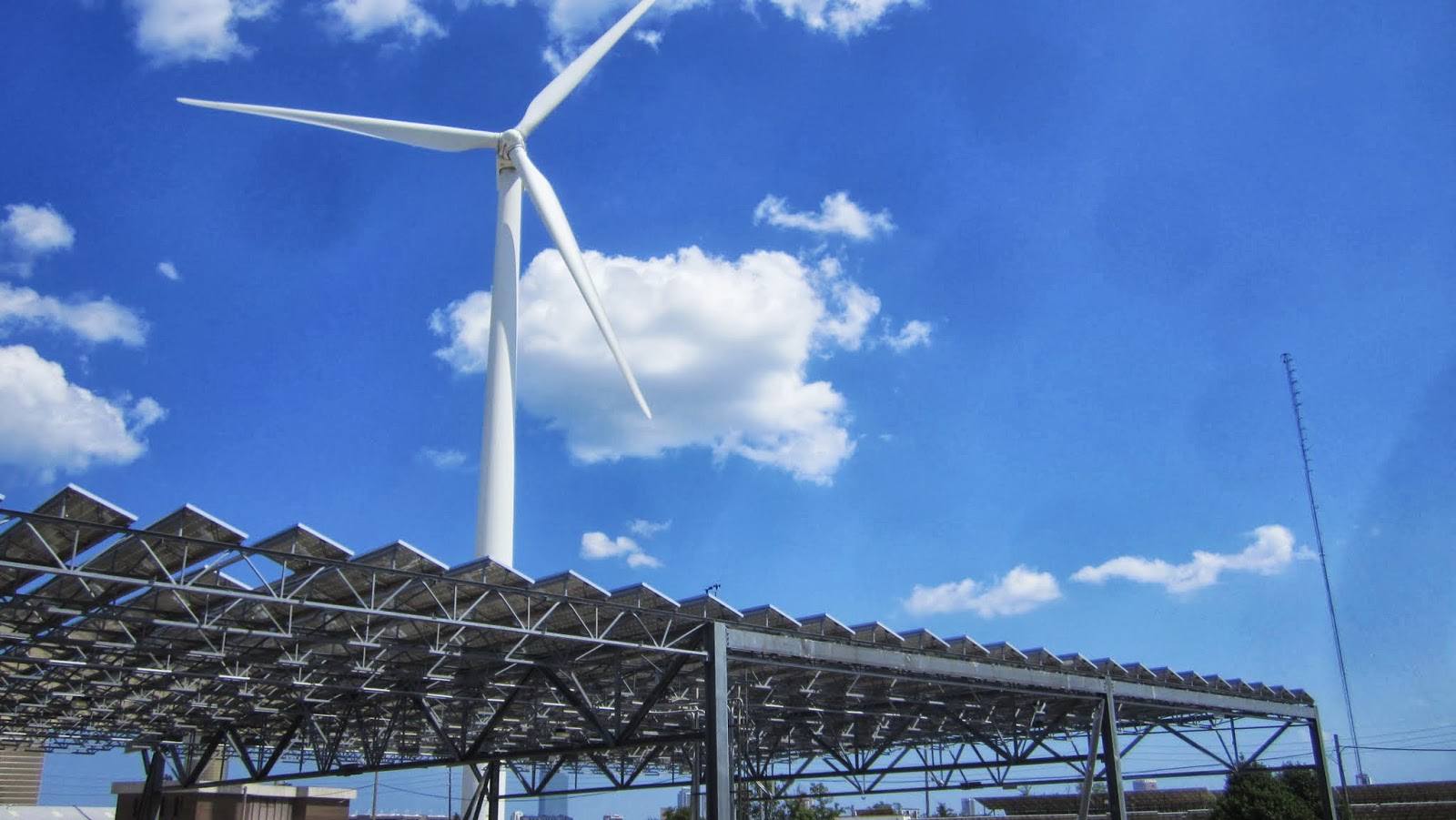 Where is the future? Some of us have been asking  that question for a number of decades now. Surely there's a place that's seriously trying not to endanger the future by feeding off the past. Where are people harvesting today's energy--today's sunlight, today's wind? Last month, thirteen intrepid and understandably impatient souls set out in search of the answer. 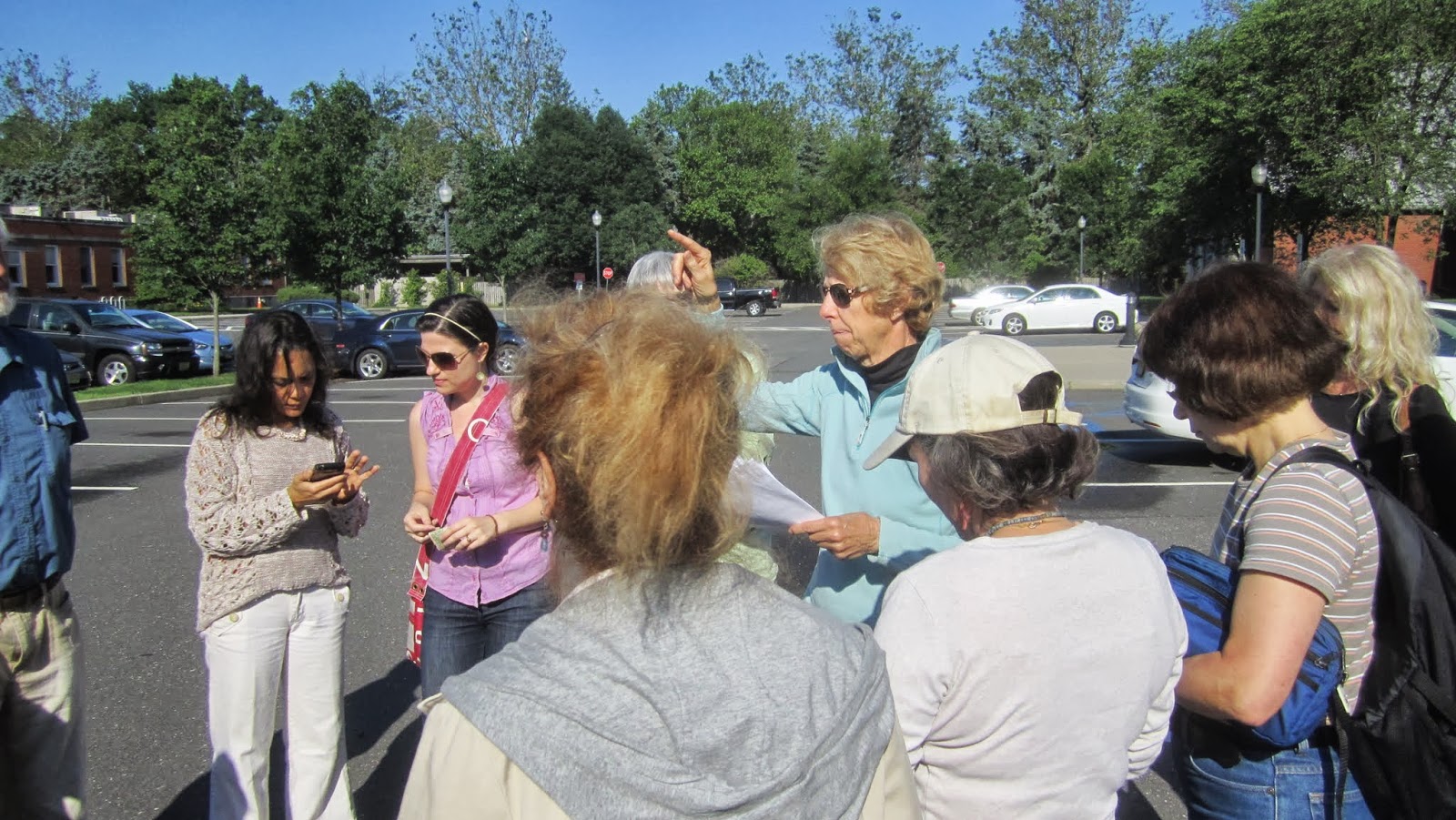 Pam Mount of Sustainable Jersey, who organized the tour, pointed not west towards California but instead south and east towards Atlantic City. We were about to head to a gambling mecca in search of a present that's not gambling with the future.

And we were about to meet a public servant who sees delivery of services, environmental stewardship and cost-effectiveness as complementary, and has the passion, skill and can-do attitude to make it all happen. His piece of the world is better known as the Atlantic County Utilities Authority. Rick Dovey, president of said Authority, had already showed us their recycling plant and their energy-producing landfill, and was about to show us how additional investments in the future were paying off in Atlantic City. 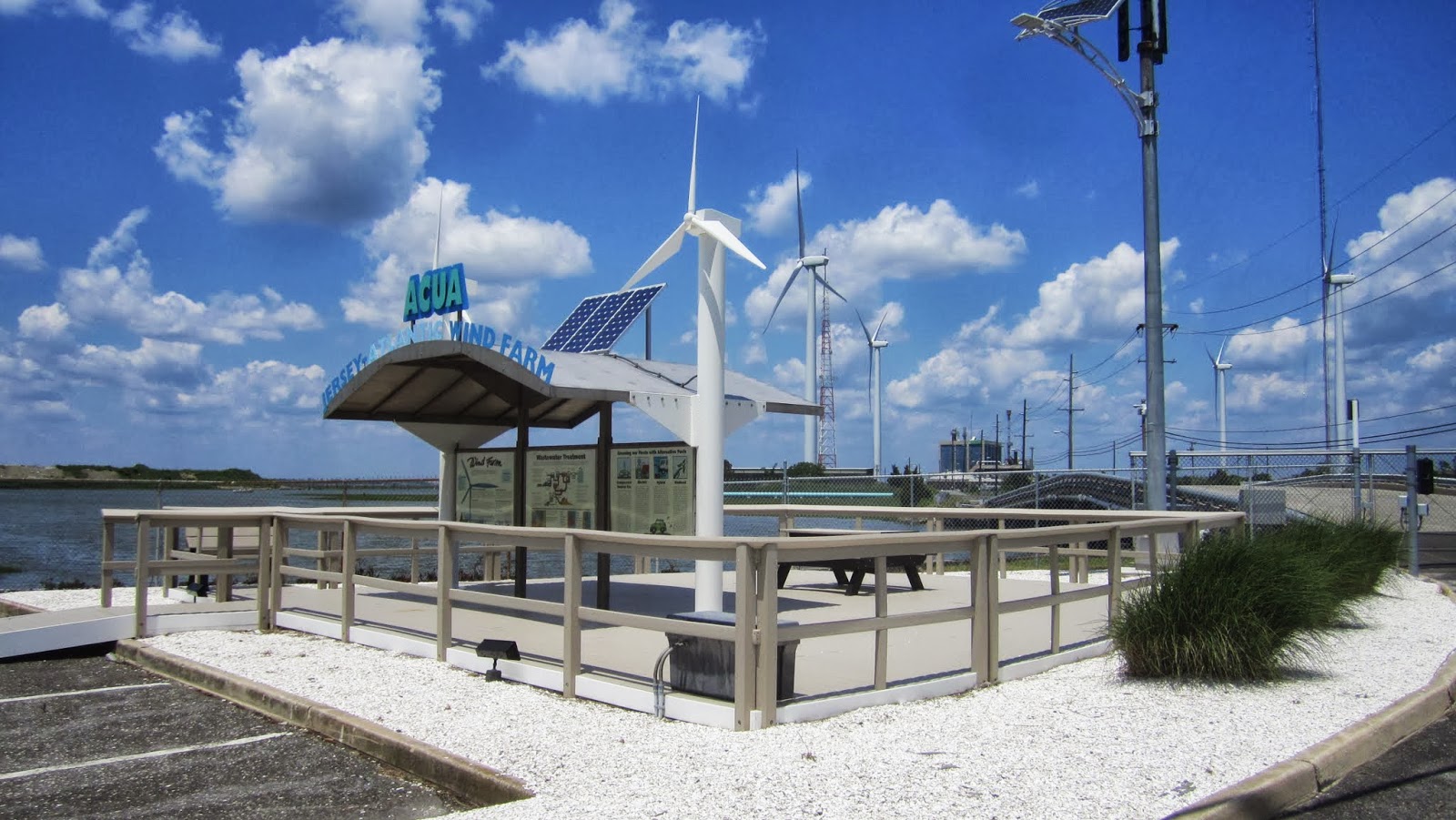 Was the future here? No, that's the small model of a wind generator at the entryway. I had mistaken it for a putt-putt golfing range with a sustainability theme, when we first passed by, missing the turn. 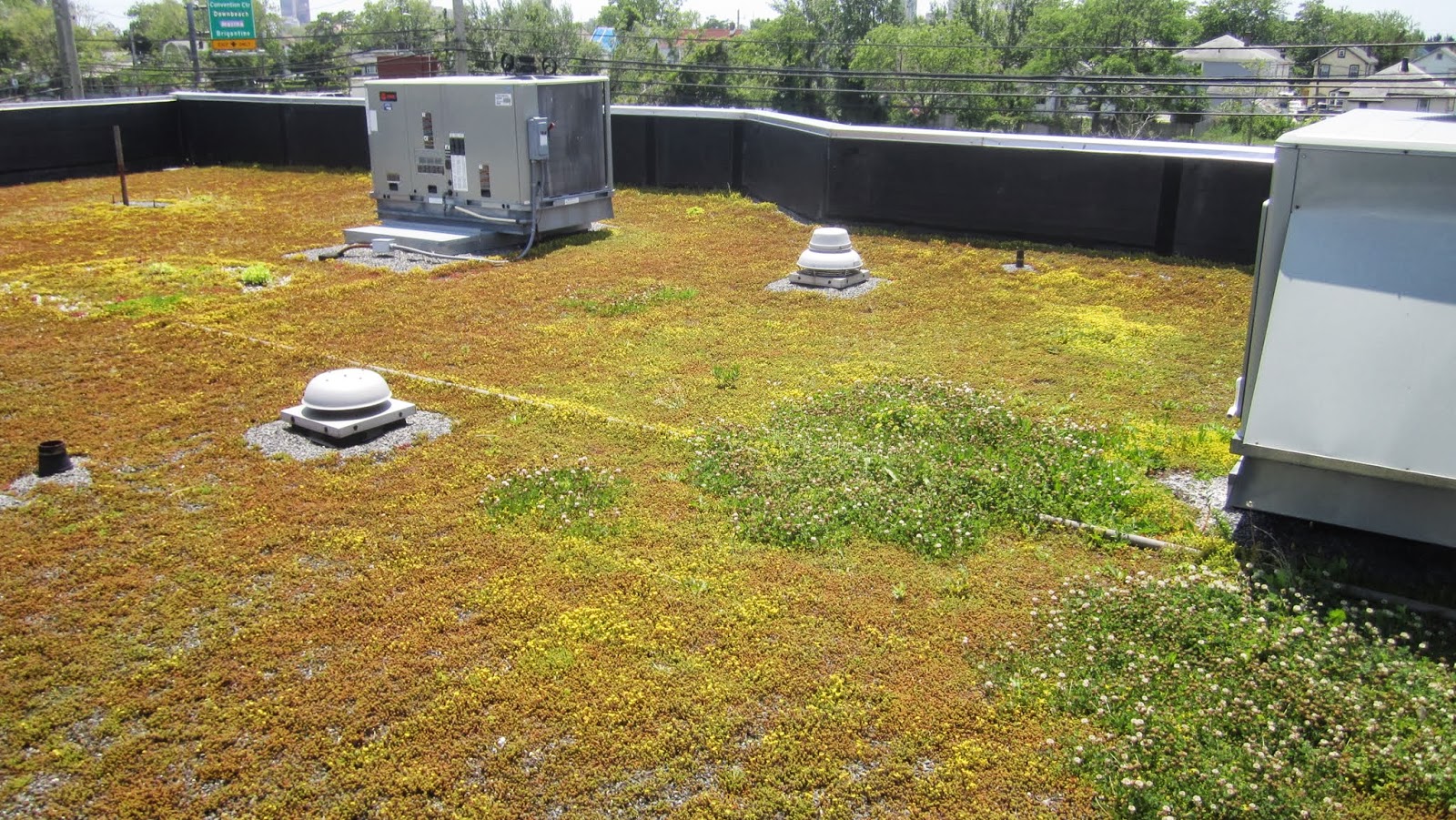 Was it here? Well, sort of. This is a "green" roof planted with sedums that help reduce runoff and insulate the building. 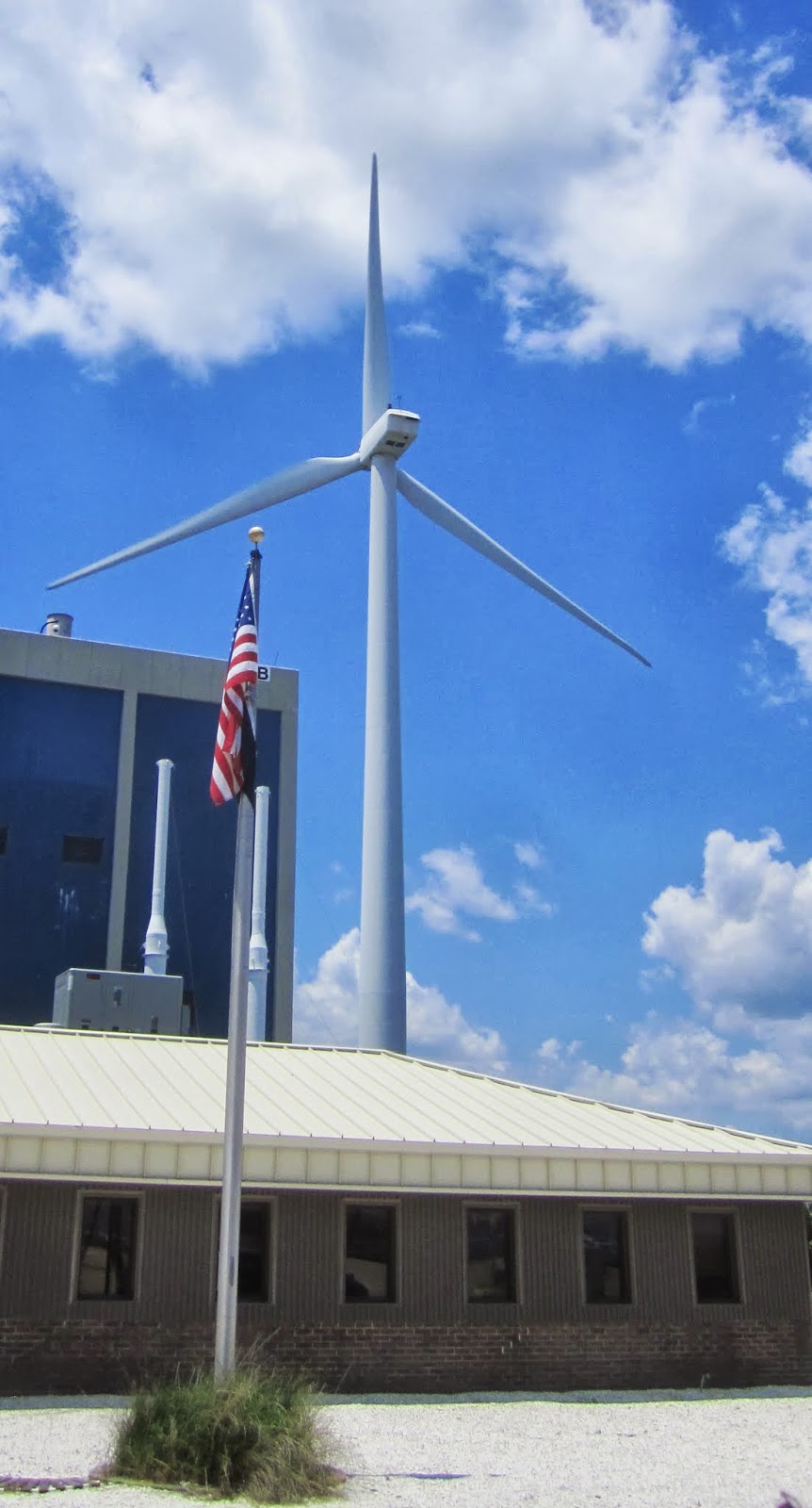 The future was, surprise, most vividly demonstrated at Atlantic City's wastewater treatment plant. (Note the pairing of American flag and wind generator, symbolic of increasing freedom from fossil fuel's tyranny.) The setting is more fitting than you might suspect, because the desired future is a place where our collectively created hazards--the pollution that is a biproduct of our lifestyles--are rendered benign before they can wreak havoc on the world. A wastewater treatment plant is a very intense, 24/7 example of this process of neutralization. 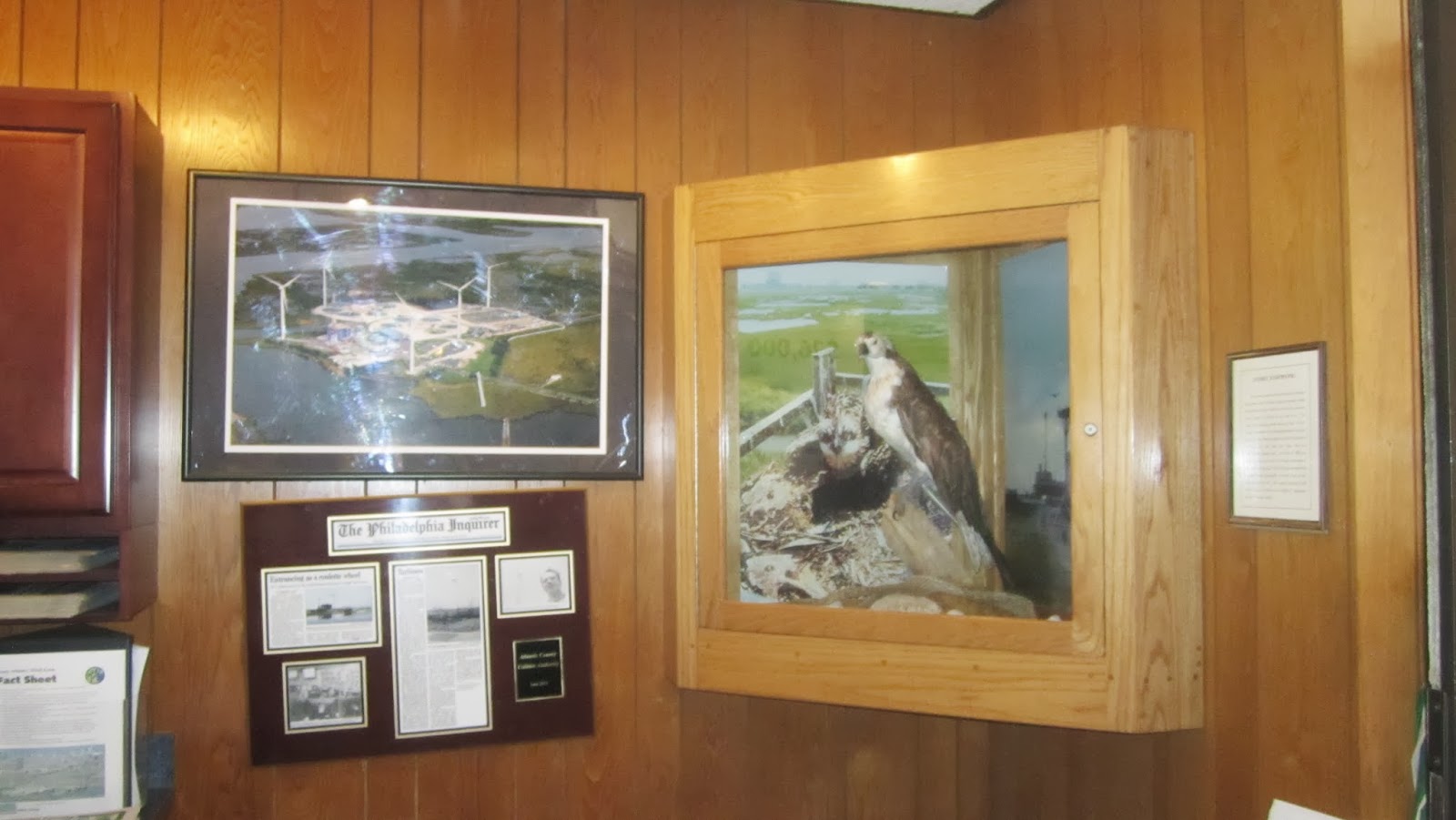 Somehow, one doesn't expect the lobby of a building that serves as destination for all of the city's sewers to look like a nature center. But here are the paneled walls, the bird of prey on display, informative pamphlets, and windows looking out upon attractive plantings. 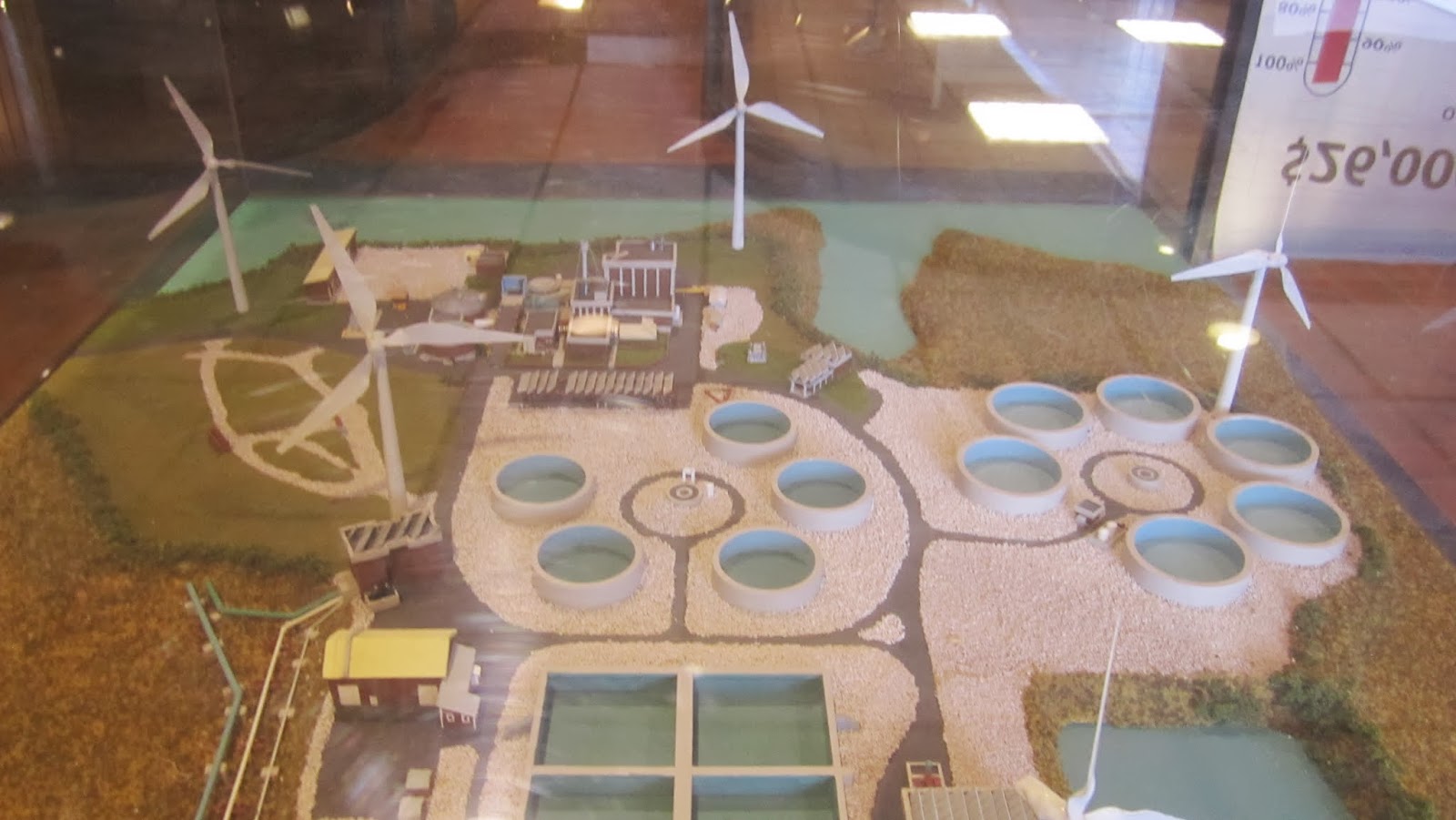 To describe the place as a nature center is not far off. All those settling ponds and aeration tanks, shown in the model in the lobby, are hotbeds of nature-driven transformation where the foul is made fair. At this interface between city and ocean, a lot of good things have to happen, and fast, because the sewage stops for no one (name of upcoming movie). 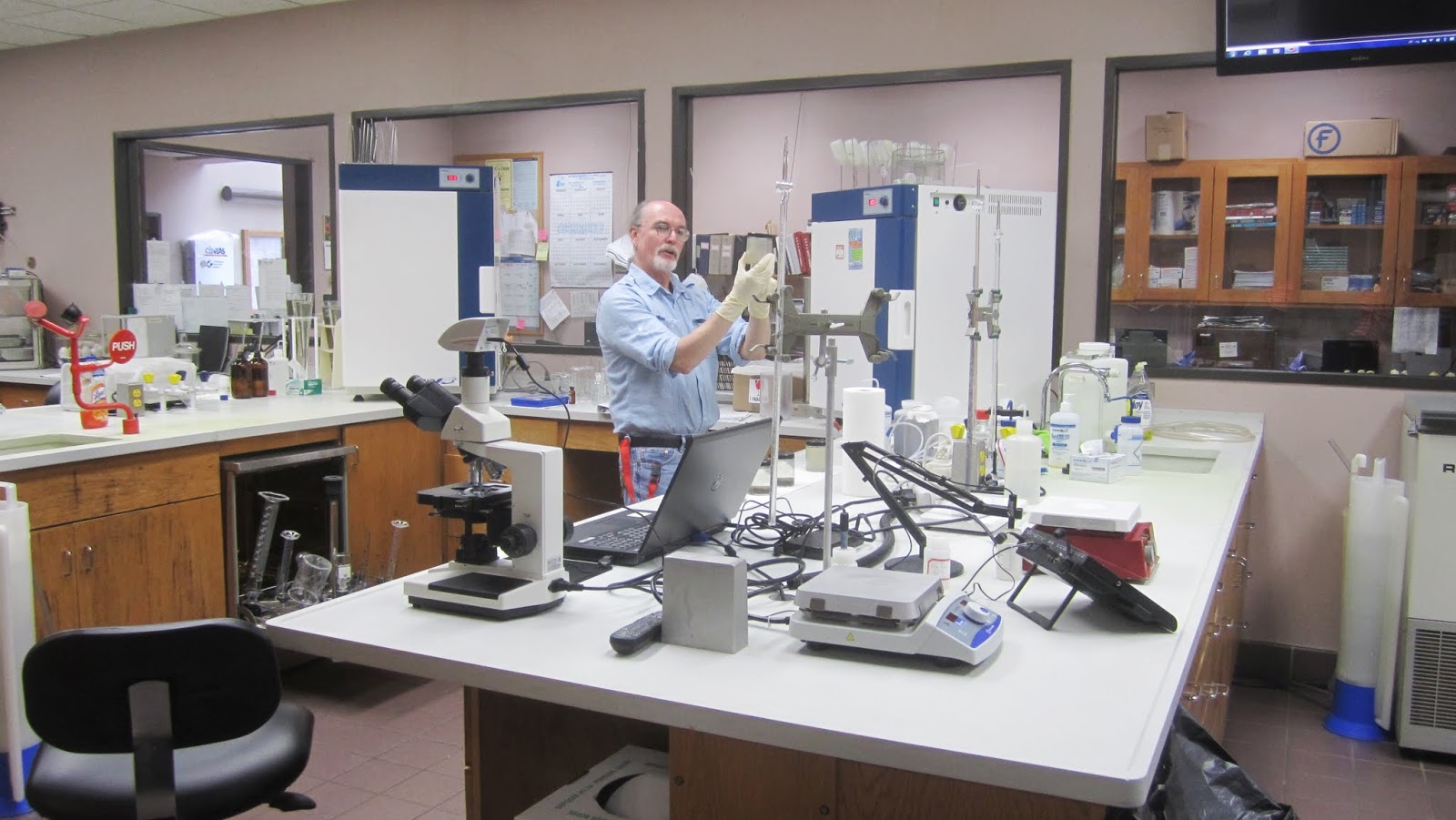 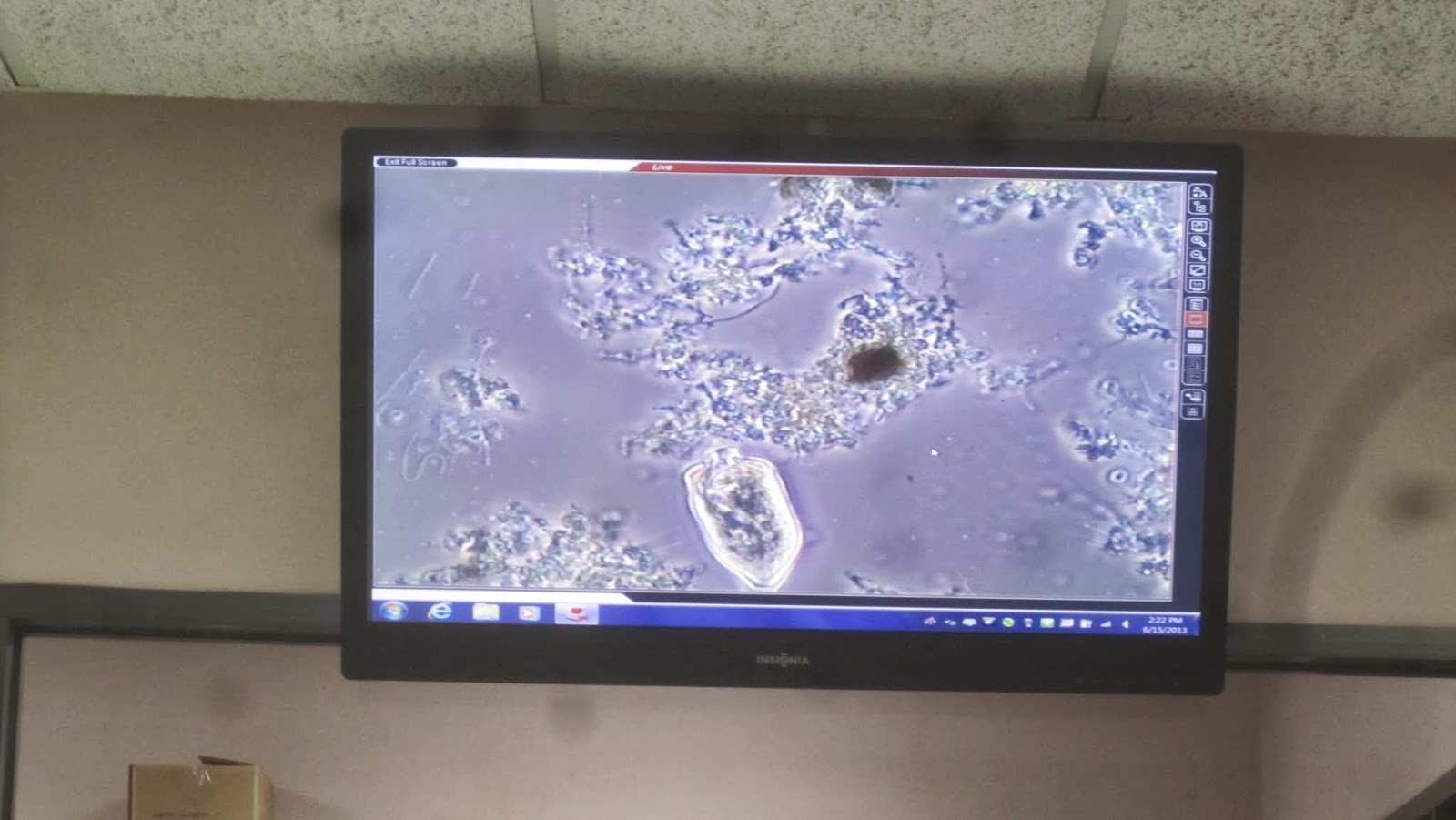 Those heroes are humble, everyday sorts, who live modest lives all around and within us--bacteria, protozoans, rotifers and the like--that when concentrated in wastewater work tirelessly to gobble up the grossities and neutralize the nasties, leaving the water clean enough to mingle once again with the finer waters of nature when pumped a mile out from shore. 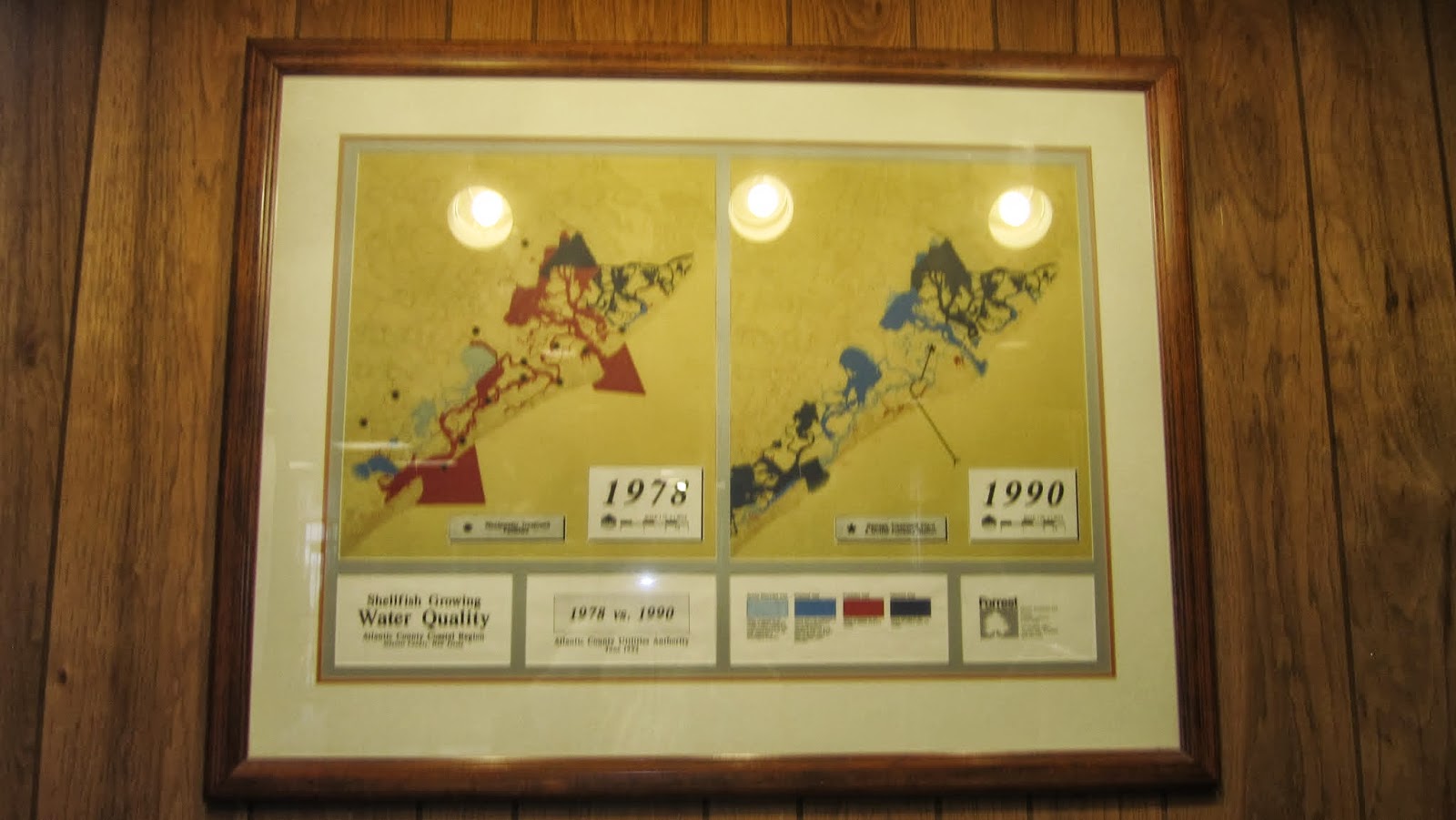 A placard proudly documents the treatment plant's success at cleaning up nearby waters since the 1970s, when shell fishing was banned in the back bays and intercoastal waterways. 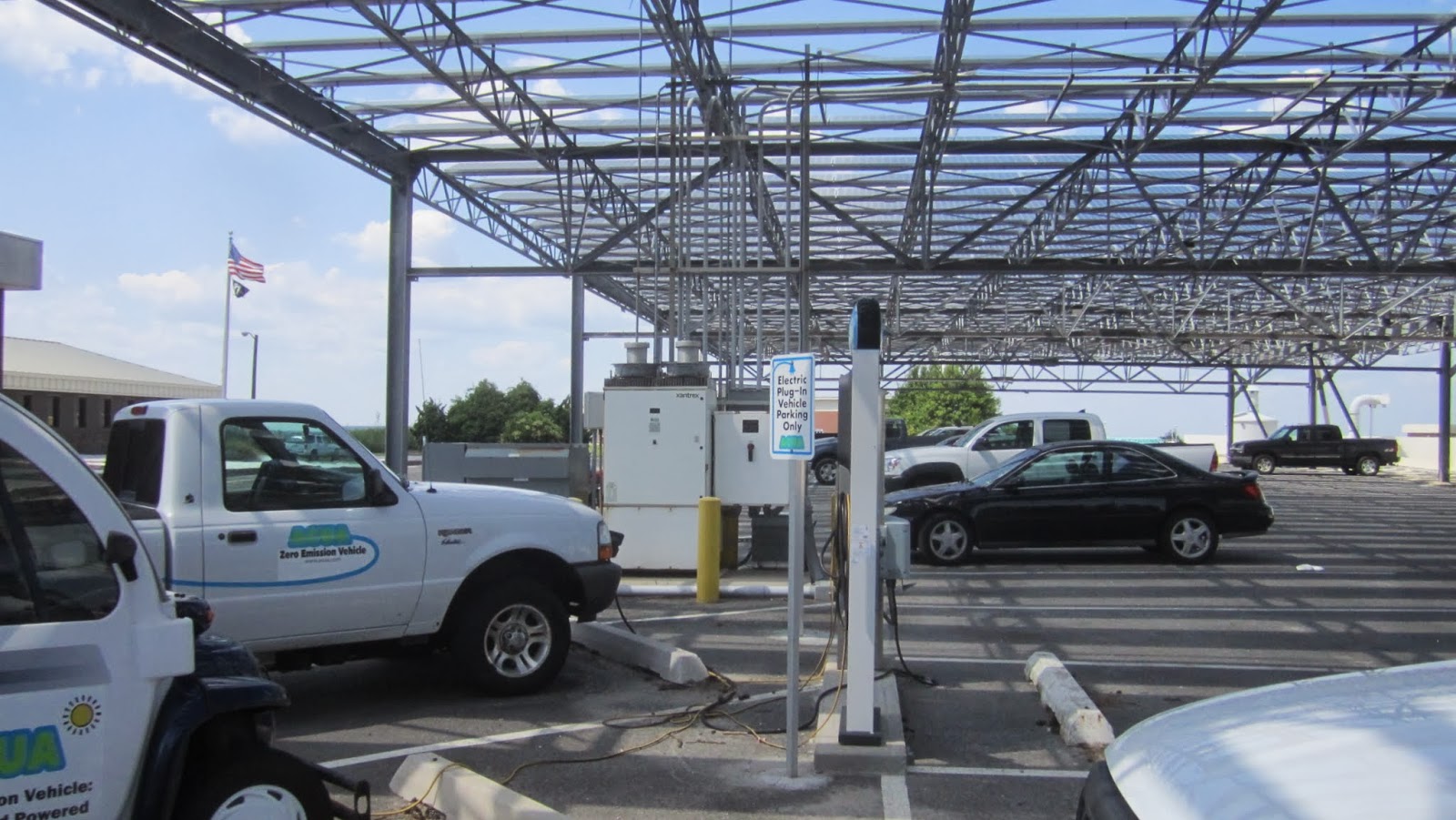 Have you heard talk of shading parking lots with solar panels? What a nice idea. Well, they did it here years ago, complete with electric vehicle chargers. 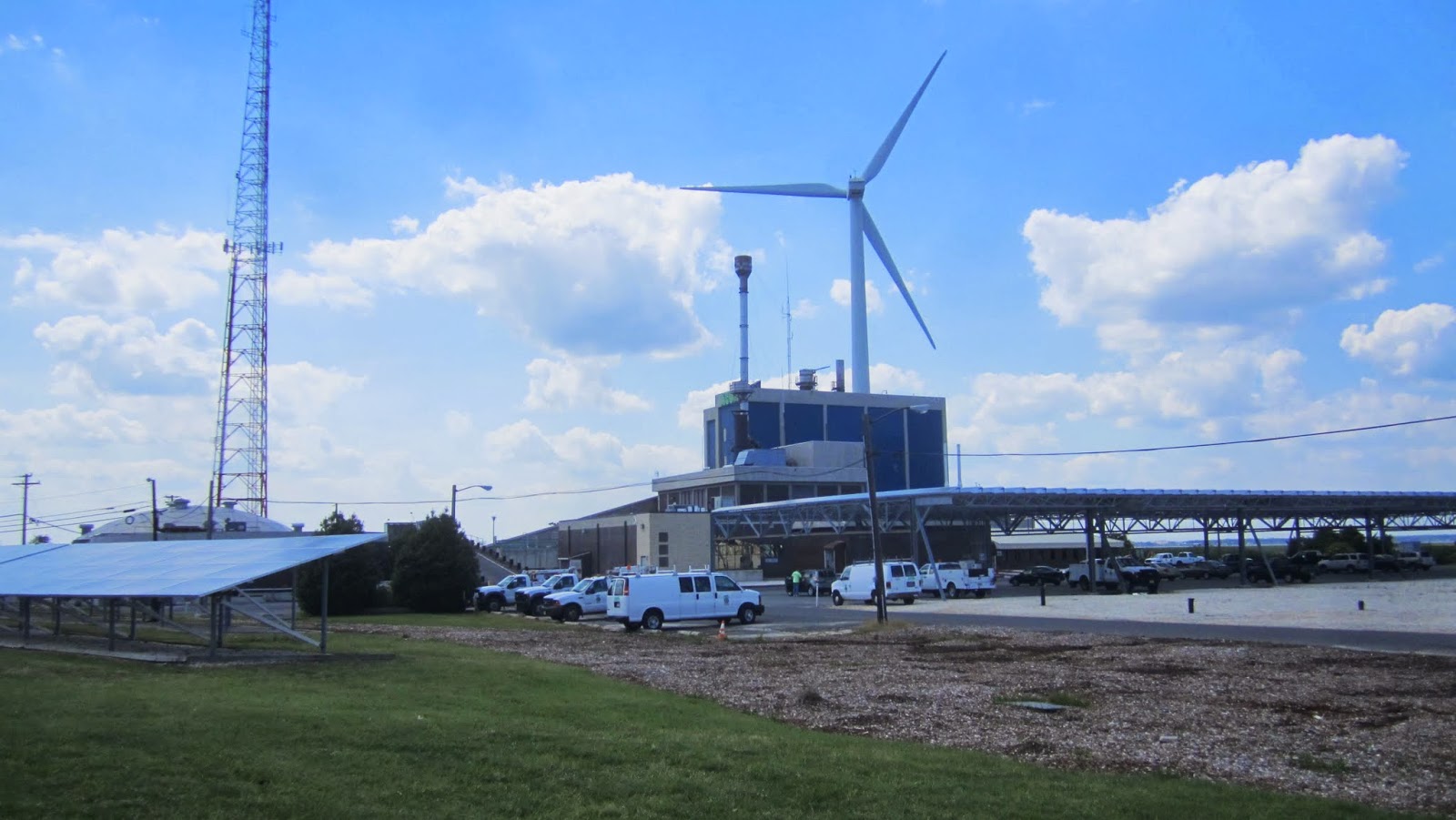 Additional solar panels on the grounds add to the renewable energy generation. More than half of the plant's electricity needs (the equivalent of 1800 houses) are provided by wind, with a small solar assist. No doubt more modern wind generators would substantially increase that production, given the gains in efficiency since these generators were installed.

When installation of the wind generators was first proposed, some environmental groups protested, contending that the blades would take a toll on birds. The loss proved to be minimal. Early concerns about the wind generators' appearance also evaporated as they quickly became a welcome landmark on Atlantic City's skyline. More information can be found here and here, with lots of fact sheets on the plant compiled here under the "Green Initiatives" tab. 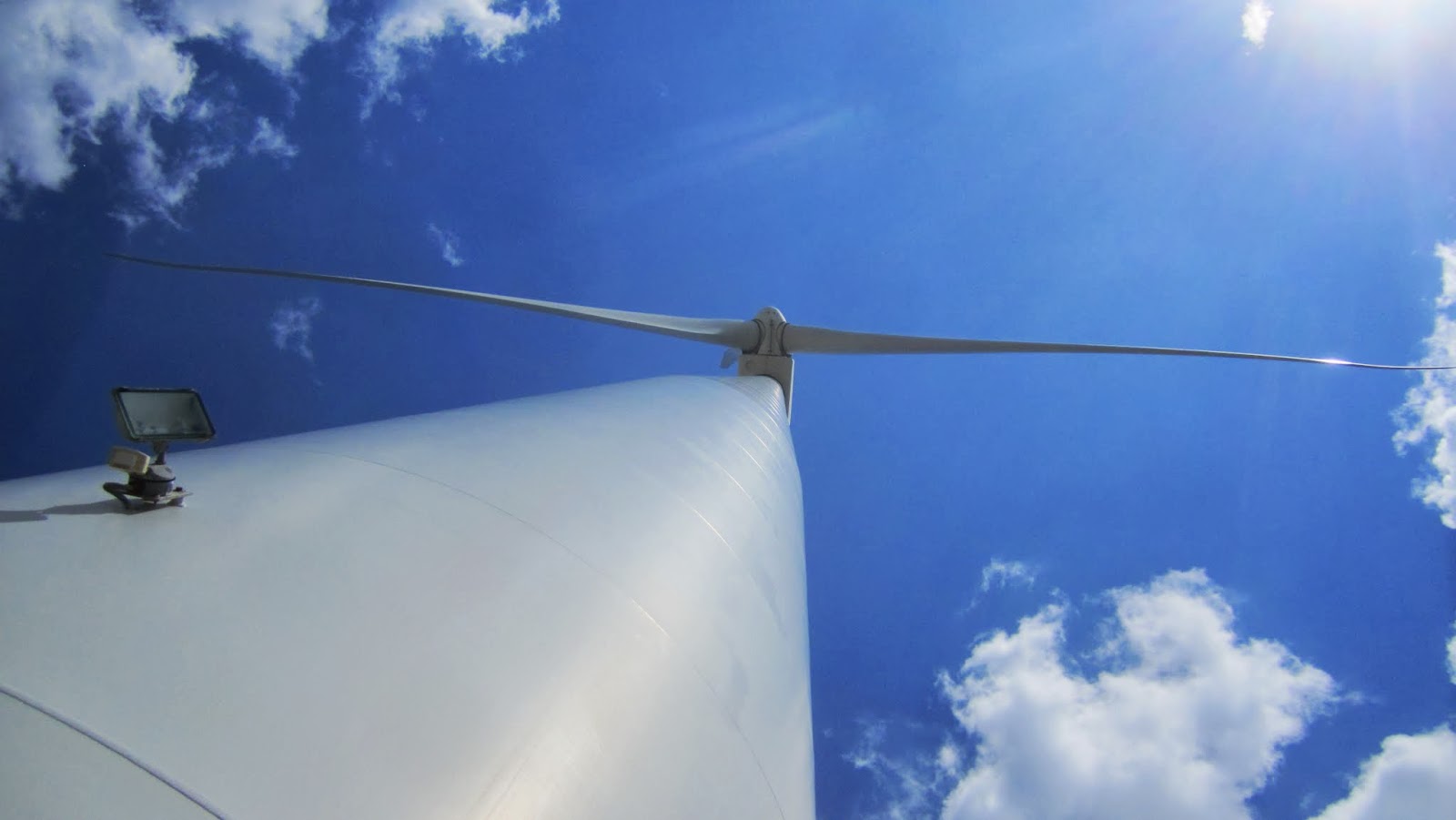 The next step might be to harness the energy in the sludge, which is currently incinerated using some $2 million worth of natural gas each year, and wind energy won't translate well to most inland areas. But overall, this step towards the future, this beachfront toehold of sustainability, which surely took deep stores of persistence, persuasion and patience to bring to reality, looks great from front, back, sideways, the bottom up and the top down.