How do we find inner peace, when the machines we love are also unraveling the climate we need? The great divide is most evident in the Daily Show, where a devastating critique of climate denial will be juxtaposed with advertisements tempting us to buy gleaming, carbon-spewing automobiles in our pursuit of fun, power, status, and romance. 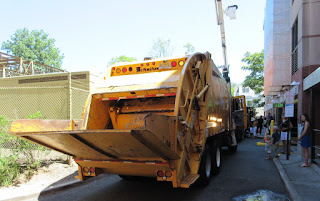 A local version of this arose via the ever inventive programming of the Princeton Public Library, which hosted "Truck Day", when kids could gather to hear truck-themed stories inside, then go outside behind the library to see real trucks that serve the town.

For me, the event evoked strong associations directly opposed one to the other. First there's the memory of having spent copious amounts of quality childhood time playing with toy trucks on rugs, in sandboxes, and on the kindergarten playground. Sparring with those pleasant memories, and the pleasure of meeting the trucks and the people who drive them on Truck Day, is the adult understanding that, though trucks are really useful, and kinda cool in their lumbering way, we know that their use comes at a collective price.

One way to deal with this is to say, yes, machines serve us well, but until they're powered by something less climate-altering than gasoline, we should find ways to use them as little as possible. In other words, the more we can wean municipal services of fossil fuel use, the better. 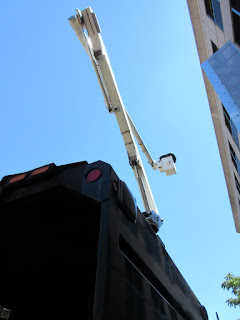 This bucket truck for tree removal will be used more and more in coming years, as Emerald Ash Borer sweeps through town. 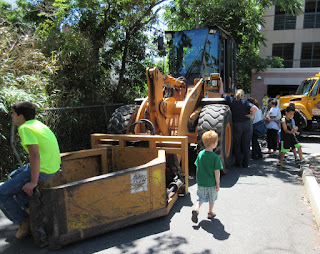 But one truck which clearly could be used less was just around the corner. It also happens to be the most charismatic, and drew the crowd. A wheel loader nicknamed The Claw, it spends a lot of time cruising the streets, picking up all the brush, leaves and yardwaste people toss out for collection. Residents are hooked on the convenience of the service, but it creates a Sisyphean reality for the work crews, who clean a street only to see residents dumping fresh piles in their wake. This collective dumping on public spaces is disturbingly reminiscent of climate change, which too involves a collective dumping on shared spaces.

People could easily compost most of their leaves and yardwaste in their own yards. Even small yards have room for leaf corrals. Less dumping in the streets means less dumping of CO2 into the air by our wonderful but star-crossed machines. Sounds like a win-win. 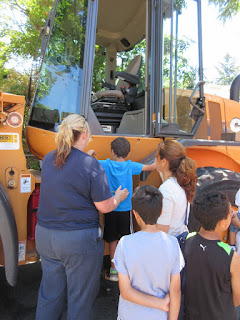 The woman who drives The Claw helped kids climb up and sit in the cab. Those who could overcome their fear of climbing were rewarded with a view from twelve feet up. That's how I see these sorts of machines fitting into modern reality. Admire them, use them when needed, but minimize their use to whatever extent possible. That way, the machines will last longer, and our habitable planet will last longer, too. Give the kids something to climb on, and a livable planet to grow into. 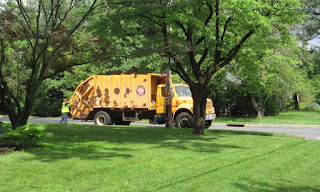 One way to minimize the use of The Claw and its entourage is to better utilize another truck the town owns. Like the Little Engine That Could, it is not a machine that would impress anyone with its power or gleaming finish. This old dumptruck is used to pick up residents' bagged yardwaste once a week, six months out of the year. It wasn't on display at the library. In fact, it's downright rusty, but it happens to be one of two that the town owns that could be fitted in back with a "tipper hook", which is used to empty large roll carts of yardwaste. Retrofitted with a tipper hook for about $5000, the truck could come by people's houses once a week most of the year, picking up yardwaste put in roll carts or bags. It would largely replace the less efficient Claw caravans. (type "rollcart" into the search box of this blog for other posts that describe the savings and efficiencies to be gained with this approach)

An updated version of The Little Engine That Could would be a machine that didn't need to be used very much, because people were finding more and more ways to be less dependent on machines, and because it was used less, it could be run on renewable fuel which is less plentiful than the carbon energy we dig out of the ground.

That's the way to bridge the divide, and lead us towards inner peace in a world of troubling but lovable machines.