FIGuring Out A Use for Old Carpets 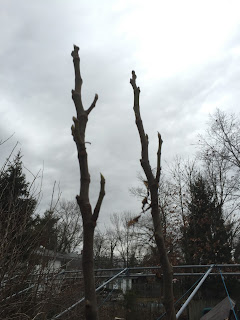 When fig tree stems stand naked against the arctic air, the buds burn and the stems die back to the ground. Though new stems sprout in the spring, no fruit is borne. Three years in a row this has happened, for lack of protection. Finally, in the waning light one recent afternoon, with a 15 degree night approaching, Mr. Sustainable was finally moved to action. There was a new roll of burlap to wrap around them, but it wasn't long enough. What to do?

The internet called for wrapping them in old carpets, but where to get one? 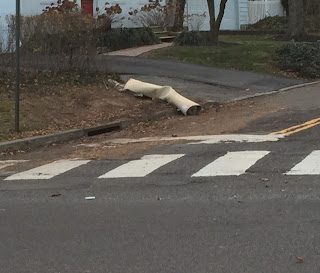 What a coincidence that the Kurbside Kmart just across the street was having a holiday sale on discarded carpet. 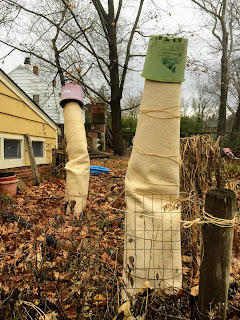 It was hard for Mr. Sustainable to cut a decent looking carpet in two, even one that had been lying on the curb for three weeks. But cut he did, and the result was these two characters, or shall we call them FIGures, each wrapped around a fig tree. 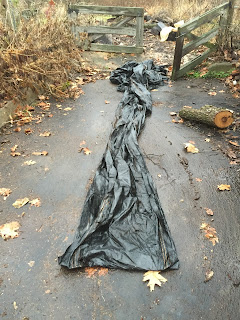 But there was a third fig tree and no more carpet. What to do? Fortunately, Mr. Sustainable had retrieved discarded silt fencing from another Kurbside Kmart elsewhere in the neighborhood. It just looked useful, somehow. Little did he know how prescient that bit of scavenging would prove to be. 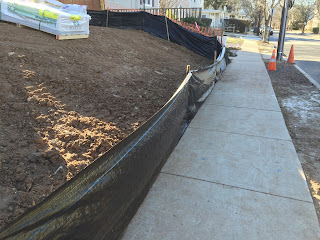 Silt fencing is that tough, element-proof fabric they install on building sites to catch dirt before it erodes into the street. One of the paradoxes of government is that we have elaborate controls on runoff from construction sites, while allowing spraying of fertilizer, etc. on lawns and dumping of leaves in the street, which create far more nutrient-rich runoff than erosion from these scattered building sites ever would.

But we were talking about figs. 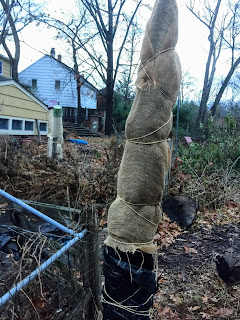 The black silt fencing made a fine wrap for the third fig tree. The remaining burlap was wrapped on the outside, to better deflect the sunlight and avoid roasting the fig tree on sunny winter days. 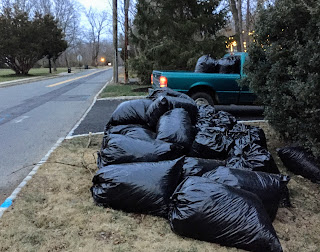 Mr. Sustainable scored his third win-win a few days later when, needing some thick plastic bags, he thought of buying new bags at the hardware store, then remembered seeing a pile of bagged leaves down the street. The town doesn't pick up leaves bagged in plastic, and the bags might remain there for weeks before the owner caught on. A truckload of those gave Mr. Sustainable all the bags he needed, plus some leaves to pile on the last remnants of invasive english ivy along the fenceline.

There were imaginary high fives all around, with hopes for a fig or two come summer.
Posted by Steve Hiltner