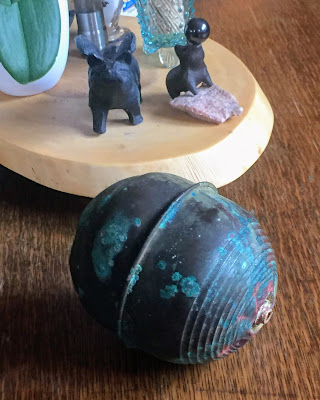 If you are a conservation-minded, fixer-upper type, and are visiting a friend and happen to see something about their house or garden that needs attention, what do you do? Do you point it out and offer to help? Maybe you spotted a weed in the garden that you know will cause grief later if it's not pulled before it spreads all around. Or maybe it's a filter on the air intake for the furnace that looks clogged with dust. Knowing how you tend to forget to change out such things in your own home, you know that your fresh eyes could be of use. Your friend's hosting you for a night or two, after all, and you want to do something in return. At the same time, it can be rude to walk into someone's garden or house and find flaw.

What to do? I was in this predicament while staying with my friend Dan during a recent recording session in Ann Arbor. I was sleeping in the finished basement, and noticed that the rarely used toilet down there had a slow leak. Even slow leaks can waste a lot of water and increase one's water bill substantially.

I hesitated to say anything, but finally did. We looked inside the tank and found an ancient system with a copper "float" that is supposed to automatically shut off flow when the water has pushed it up to a certain level. Something wasn't working, but we couldn't tell what, and the chances of finding parts for such an antique system seemed close to nil.

Intimidated, we left it as is. I had managed only to make my host aware of a seemingly unsolvable problem in his basement. But then a week later, he texted me a photo of the copper float sitting on a table. It had occurred to him to take a closer look at that old float. He discovered that, despite the ancient plumbing, he could remove the float from the toilet, and when he did, he found that it was half full of water. The float wasn't shutting off the water because the float wasn't really floating. He bought a new float, installed it, and the slow leak was stopped. Then, being of a resourceful musical bent, he dried out the copper float, drilled a small hole, put some rice seeds in it, and made it into a shaker, to be used for percussion.

This experience scores in the win-win-win category of sustainability, with two of the wins being physical (copper reuse and water conservation) and the other win being emotional (my relief at seeing my intervention being validated). There would be a fourth win in there if I had miraculously been able to make the trip without fossil fuels.

There's one lingering question: Did the idea for a "copper float shaker" arise before or after Dan repaired the slow leak? That is, did his fascination with the musical potential in objects (he had previously fashioned a guitar pick out of a walnut shell) contribute to his success in home repair?
Posted by Stephen Hiltner