Quality Control in the Local Park

Our house straddles two worlds. In front, there's the ever increasing stream of autos and trucks on Harrison Street. But behind the house is a yard full of wildflowers and beyond that a small Princeton park. We had chickens for many years, and ducks, and the miniponds have attracted several visits from a great blue heron. 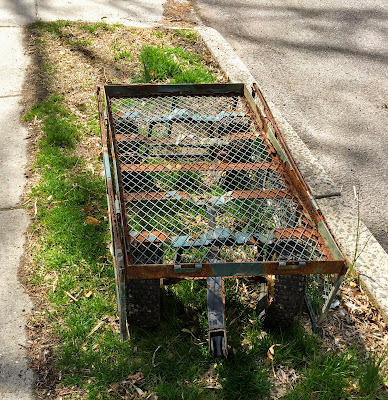 The park, into which we can slip through a small homemade gate, is hidden away, known mostly to neighbors, and tends to receive contributions of toys and basketballs from those who use it. Some of the toys are in better shape than others, and some of the basketballs are more inflated than others. Here, as everywhere else in the world, there is an ongoing influx of stuff with no clear mechanism for quality control, repair or disposal.

A friend whose kids are still young enough to go there recently told me that the level of disrepair and deflation had reached an uncomfortable high. I stopped by, and noticed the most clearly offending item. It was a big wagon that from a distance looked like it would be really cool to pull kids around on, like a hay wagon ride. Closer inspection showed it to have long since transitioned from rustic to just plain rust, with all four tires permanently flat.

For me, with a pastoral backyard and busy front yard, the solution was obvious. The rusty wagon was hauled from the park to our front curb, where it quickly disappeared into one of those scrap trucks that passes by. A little communication, a little action--the system works, sometimes.
Posted by Stephen Hiltner