The Composting Toilet Alternative to Porta-potties

While planning a recent event at Herrontown Woods, the question came up: Is there a more natural alternative to a plastic, chemical-laden porta-potty? Turns out there is, at least in Australia. It's called the Natural Event, and was developed there for use at festivals. 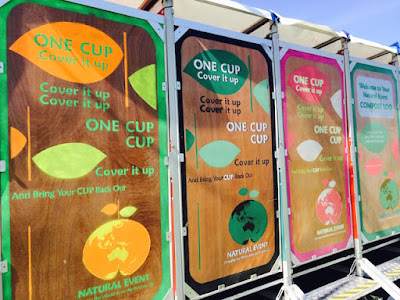 The Natural Event people are determined to "change the world from the bottom up," and their website declares that they are coming soon to the U.S.A.. Meanwhile, composting toilets like Nature's Head are getting good reviews in the tiny-house trade.

The key, it turns out, whether its a row of portable composting toilets at an event or a composting toilet installed in a tiny-house, is to separate the liquid from the solid. With pee going into a separate container, the solids remain dry and aerobic. This, along with aeration and/or a handful of sawdust or woodchips tossed on the solids after each use, reportedly eliminates the odors associated with porta-potties.

Funny thing is, when separated from the liquids, the solids really don't amount to much. Our bodies are built mostly of elements that come from the air--oxygen, carbon, hydrogen and nitrogen--as is our food. A substantial portion of what we eat magically exits our bodies as CO2 exhaust when we exhale. The solids in a composting toilet, particularly in the non-portable indoor toilets that use assisted aeration rather than woodchips, dry out and compost down to nearly nothing.

The technology is there to bypass our traditional system, which manages to flush everything "away," but in so doing creates massive amounts of liquid waste that must then be transported and cleansed somewhere else at great expense. In Princeton, the so-called "biosolids" are then separated out, then incinerated using hundreds of thousands of dollars of natural gas, then landfilled.

The nutrient cycle of which we are a part, long interrupted, really could be mended. A user of a portable composting toilet in Plainfield, MA, says she doesn't use her indoor plumbing anymore. Strange to think that an individual could disengage from the sprawling system of sewer pipes and pricey wastewater treatment plants, and make use of what we've worked so hard for so long to get rid of.

But what are the chances, given the heavy regulation of sanitary processes, and the lack of regulation of all the fossil fuels burned to keep our current system going, that the composting toilet will be any different from all the other promising technologies that linger indefinitely on the fringes of society?
Posted by Stephen Hiltner