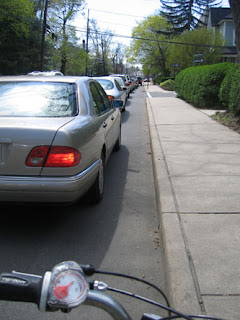 Heading to Communiversity past a line of strange contraptions that seem to be holding their occupants prisoner. On my bike, fortunately, riding past each vehicle, I feel a wave of heat emanating from idling engines. Only 0.3% of the energy these contraptions consume actually is used to move the occupants. The rest is spent moving tons of steel and producing heat. You could say, then, that while we think of cars as transportation, their primary function--99.7%--is to hasten global warming. Somewhere far overhead, traveling through the universe to monitor progress, the unrepentant members of Planet Killers Annonymous must be watching our folly with glee. 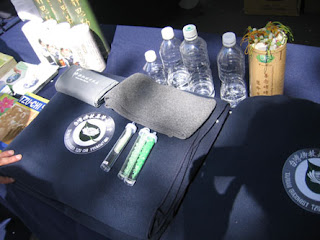 At the festival itself, a booth offered a good demonstration of how plastic bottles can be converted into blankets, which apparently were headed to people displaced by natural disasters. They said it takes 70 plastic water bottles to make a blanket. 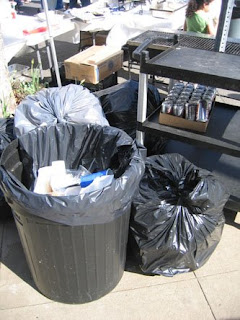 Meanwhile, continuing the tradition of dysfunctional recycling at Princeton festivals, there was a complete lack of accommodation for recycling at Communiversity. Lots of drink containers being sold by vendors, but only trash containers to receive them after their ten minutes of service to society. Princeton has a recycling ordinance, it has two recycling coordinators, it has good intentions--all to no avail.

Doesn't anyone find this strange?

I did, but then of course there were some positive aspects: good music, a strawberry smoothie, friends. Maybe the sustainability movement in town will bring some changes next year.