The Struggle To Improve Recycling in Princeton 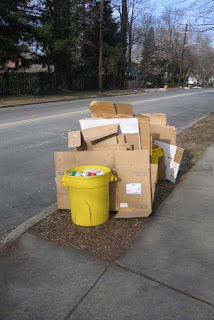 The following was published in the Princeton Packet "As I See It" series on January 13. The column is no longer easily accessible on the Packet webpage, so I'm posting it here. An update on discussions set in motion by this column can be found here.

THE STRUGGLE TO IMPROVE RECYCLING

Every now and then, forgetting all the pitfalls that await, I set out to improve recycling in Princeton. No other environmental venture involves as much patience, persistence, and willingness to wade through endless layers of complexity.

For inspiration, it helps to look to nature. All of its products, when the time comes, are quickly broken down by myriad organisms into the basic ingredients for new life. The brilliance of creation is balanced by an equal brilliance of decomposition. That’s how our economy would work if it were in balance.

Five years ago, when only one of Princeton’s public schools (Riverside
Elementary) was recycling to any extent, I launched a quiet campaign to get the
receptacles and protocols in place at the others. It was particularly successful at the
elementary schools, where students developed good recycling habits by being an integral
part of the process. Even after a well-designed recycling program is up and running,
though, it will continue to prosper only if there is someone in the workplace with the
passion and persistence to make sure everyone—students, teachers and custodians--is
following through.

The next year, tired of ripping the cellophane windows off of envelopes before
recycling them, I tracked down someone at the state Dept. of Environmental Protection
who could confirm that the windows can be left on, and are skimmed off when they float
to the top of the vat at the recycling plant.

More recently, when the change to “single stream” recycling made some friends
skeptical about whether recyclables actually get recycled, I decided to find out where
recyclables go after being picked up at the curb.

Princeton township and borough contract with Mercer County for curbside
recycling. The county in turn contracts with Central Jersey Waste and Recycling, which
takes the recyclables to Trenton, where they are transferred to large semis and trucked up
to the Colgate Paper Stock Co. in New Brunswick. Colgate is what’s called a MRF, short
for Materials Recovery Facility. There, recent advances in sorting technology allow the
sorting of paper from bottles, aluminum from plastic, and so on.

Recycling can be thought of as a giant, sprawling factory. We homeowners are
the suppliers at the front end, in charge of quality control. It makes sense that, to improve
our competence and morale, we should be getting feedback on what materials to recycle,
and hear word back about all the wonderful products they are made into. The state
mandates that municipalities notify us twice annually about what to put in the bin, but at
least in the borough, no information has arrived in the mail for years.

If you search the county website, you eventually find a list of recyclables--#’s 1
and 2 plastics, cans, newspaper, etc. But it turns out that the hauler has its own list, and
the MRF has yet another. After years of dutifully recycling only plastics 1 and 2, I was
surprised to learn that all plastics 1 through 7 are accepted by the MRF. They also accept
aerosol cans and cleaned aluminum trays and foil.

I asked the county if they could expand their list, and was told that they don’t
include materials that lack stable, longterm markets. Besides, any change to the county’s
list requires amending their master plan—a cumbersome process.

Anyone walking the family dog around the block on recycling day will quickly
discern that few people have seen any of these lists, and instead fill their recycling bins
with whatever they think stands half a chance of being recyclable. The MRF in turn
assumes a certain percentage of the recyclables it receives will be contaminants, and pays
less accordingly.

Does any of this contamination cause problems in the separation machinery
at the MRF? I called them up and finally was forwarded to someone who sounded
knowledgeable. Plastic bags, he said, can get caught in the rollers. Plastics 3-7 are
accepted, but end up getting shipped overseas, for uses unknown.

I’d encourage anyone who wants to get beyond the Hail Mary approach to
curbside recycling to seek out the nicely illustrated list of accepted recyclables at http://
www.centraljerseywaste.com/files/CJW_SingleStream.pdf. Links to all the various lists
can be found at princetonprimer.org.

For anyone wishing to improve recycling in Princeton, just about any
building you walk into will have some sort of recycling dysfunction in need of
intervention. For a primer on how to improve recycling in your workplace, I’ve
compiled experience gained from the school recycling project into Ten Tips at
www.recyclingcontainers.blogspot.com. There’s also an upcoming event at the Princeton
Public Library on January 24 on recycling in schools.

It’s altogether too easy to find high profile outdoor examples of non-recycling in
town. A typical university football game leaves thousands of plastic bottles in its wake,
most of which end up in the trash. Where’s a scout troop to leap into action at game’s
end? Communiversity and other downtown events also generate lots of recyclables, but
lack well-designed recycling containers paired with trashcans.

There is money available to help improve recycling, in the form of
annual “tonnage” grants the state sends to municipalities each year. This year, Princeton
Borough received $18,000, and the township likely even more. Though money can help,
the key ingredient remains individuals with the passion and persistence to cut through
layers of complexity, indifference and cynicism, and make recycling an ingrained habit--
in our homes, schools, businesses, and on downtown streets.
Posted by Stephen Hiltner