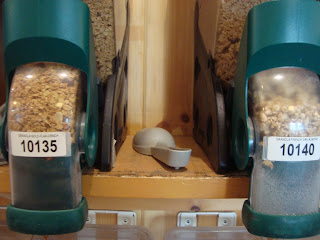 One of the granola dispensers in the bulk section at the Whole Earth Center has been made conspicuous by its absence in recent weeks. The container has long held a granola affectionately known as Honey Gone Nuts, a pillar of stability in a sea of culinary fads and changing tastes. Despite its whimsical name, it has consistently eschewed such frills as raisins and coconut, earning my lasting allegiance with a wholesome balance of classic ingredients.

Over the past year, however, this stalwart among granolas grew increasingly reluctant to flow out of its bulk container. Prodding was often necessary, and as blockages became more frequent, I sought the advice of an employee, who showed me the sweet spot on the side of the container where a deft blow would consistently loosen the contents and resume flow. In recent months, shopping for this beloved cereal had become increasingly problematic, involving holding a bag under the spigot with one hand, banging the bin repeatedly with the other, all the while preparing a response in case any passerby asked what I was doing.


I suppose it was inevitable that the cereal would eventually cease flowing altogether. Two weeks ago, my bag of tricks--the thumps, tilts and shakes that had long served--all proved futile. I alerted an employee, and was not surprised to see a conspicuous gap in the granola lineup several days later.

We expect granola, or any other food item stocked on the grocery shelves, to be compliant, to give itself up to our appetites without resistance of any sort. Certainly there have been instances in which packaging has gone rogue, stubbornly foiling efforts to access the food within. Past encounters with obscure brands of boxed cereals come to mind, in which poorly formulated glues rendered the contents accessible only by reducing the box and inner plastic sheathing to tatters.

But to have the food itself resist purchase is something new, and we must not ignore the implications. It would be easy to dismiss this as an isolated incident, a minor bit of irony in which some obscure worker, perhaps influenced by the granola's name, progressively went nuts with the honey over a period of months, adding more and more until the granola congealed into a hardened mass. I wonder if I, like many others, took this cereal's seemingly unshakable balance too much for granted, failed to see beneath its consistent delivery of sustenance a nature made fragile by stresses affecting us all as the very fiber of civilization continues to unravel. We want food to fill our needs, but surely food has needs, too.

Whether this breakdown is a response to larger societal issues--an early act of cereal disobedience--or a matter of long-disguised inner contradictions finally coming to the fore, I hope my favorite granola will get the help it needs to cope in this stressful age, to regain balance and find its way back to that old, dependable, giving self, when its name evoked whimsy rather than destiny. My mornings haven't been the same without it.