A theme of this blog is to document where things we consume come from, and where things go after we're done consuming them. To that end, I organized a delegation representing the Princeton Environmental Commission, Sustainable Princeton and Sustainable Jersey to visit one of the backsides of consumerism--the Colgate Paper Stock Company, 12 miles up route 27 in New Brunswick. That's where all our curbside recyclables go after being plucked from Princeton's curbs, hauled to Trenton and stuffed into semis at a transfer station.

The trip was in part triggered by a debate about whether Princeton should ask Mercer County, which runs Princeton's curbside recycling program, to add several items to its list of accepted recyclables, in particular plastics 3-7. (For background on this subject, see previous research I've posted here and here.) 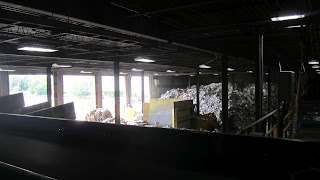 The staff at Colgate entertained our many questions, and then gave us a tour. Each semi-trailer's cargo of recyclables is weighed and then dumped on the tipping floor, where an enormous pile awaits separation. The plant can run 24 hrs/day to deal with any backlog caused by periodic breakdowns. 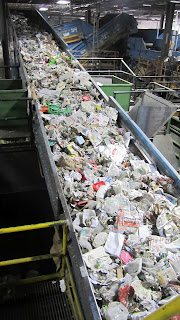 The mix of paper, cans and bottles--along with whatever else people throw in their recycling bins in the hopes that it will get recycled-- heads up into a cavernous space filled with conveyor belts and sophisticated sorting technology. 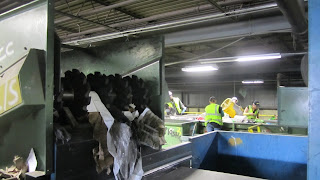 Spinning wheels lift cardboard out of the mix, while smaller items fall through the gaps. Elsewhere along the way, magnets pull out tin cans and aerosol cans, which get baled together.   When the recyclables pass over a roller energized to create an "eddy current", aluminum is repelled, rising upward and onto its own conveyor belt. Another mechanism has 19 tiny air jets, each with a sensor that can recognize PET plastic (#1) in the recycling stream, triggering a micro-blast of air that pops the PET plastic out of the mix faster than you can say "PolyEthylene Terephthalate." 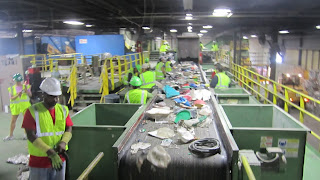 Some materials benefit from hand sorting. 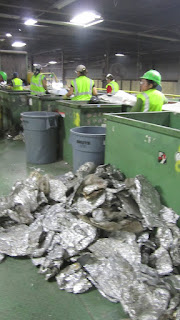 If you happen to put an aluminum tray in your bin, it ends up in this pile. Aluminum foil, trays, pots and pans all get baled together and sold separately from the higher-valued aluminum cans. 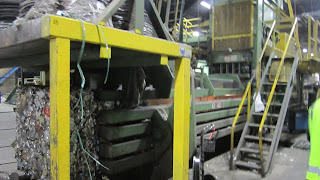 This particular machine is compressing aluminum cans into big blocks. 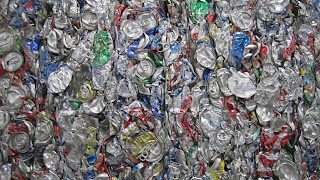 which look like modern art. I heard a figure of $1400/ton mentioned for aluminum cans. The energy-intensive process of making aluminum from ore dug out of the ground may have something to do with the high value fetched by recycled aluminum, which unlike many other materials can be recycled indefinitely. 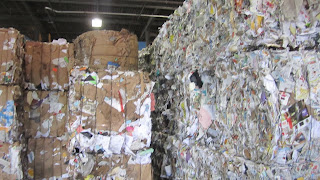 Cardboard is baled separately from newsprint. The separation process isn't perfect, but close enough for jazz, or in this case China, which needs lots of cardboard to make new boxes in which to send us more stuff. I've heard that China has newer and more sophisticated paper plants than the U.S.

One thing they mentioned about paper: If it gets wet, as can easily happen in Princeton's uncovered yellow or green recycling buckets during rains, the machinery can't separate the paper as well. The portion that fails to be sorted out ends up going to the landfill. Shredded paper also tends to fall through the cracks, making it a better prospect for backyard or curbside composting. 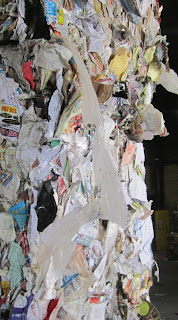 The decision a couple years ago to switch to "single stream" recycling, in which all recyclables are mixed together at the curb, added to suspicions among some that it was all getting hauled off to the landfill. But the switch was made due to advances in separation technology and the significant savings achieved through streamlined pickup. Though some plastic can be seen in these bales of paper, the plastic can be skimmed off the top of the pulp at the paper plant. Same with those cellophane windows in envelopes. 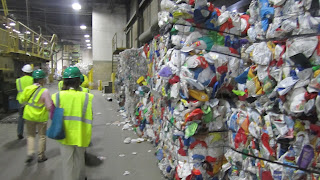 Our #2 plastics get separated into two kinds: clear (milkjugs) and colored (e.g. laundry detergent jugs). Plastics #s 3-7 are all baled together, and typically sent overseas. We had heard rumors that the 3-7's are often warehoused and then hauled to a landfill for lack of markets, but we were assured this is not the case.

Mercer County does not include plastics 3-7, aerosol cans, and aluminum trays and foil on its list of accepted recyclables. Yet, all of these items are accepted and successfully marketed by the Colgate plant. 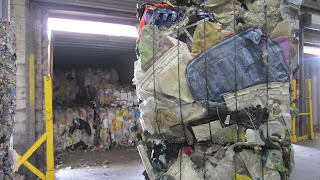 The bales are sized to fit snugly into semi-trailers. In the photo is a bale of large items of plastic. I see a blue top for a storage bin, and a six-pack for tomato seedlings. Even though of minor value compared to aluminum, these low-grade mixed plastics have a market somewhere in the world. 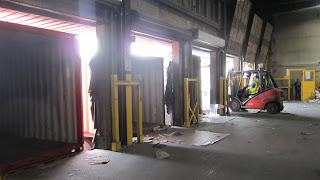 We left as we came, past the long line of semis being loaded with our recyclables--now separated, baled, and ready to be turned into something new. The visit made clear how much effort and energy goes into dealing with all this detritus of society, and for many of these materials the journey has just begun. 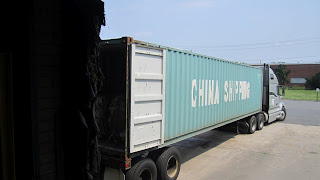 Concern has been expressed about whether the plastics 3-7, most of which go to China, India or elsewhere overseas, are being used in environmentally unfriendly ways. But many other materials also go overseas. This "China Shipping" truck is full of cardboard. Some 60% of recyclables from New Jersey are shipped overseas.

Neither Princeton nor Mercer County has any control over where our recyclables end up. If we decide not to recycle various materials because we don't know where they go, then most recyclables would have to be sent to the landfill. Though it may seem a waste of energy to send recyclables overseas, they likely are carried by ships that would otherwise be empty as they return to China or elsewhere to pick up more merchandise.

Plastics 3-7 represent only 1% of the materials currently coming to the Colgate plant. Staff there gave us the sense that the more of a particular material that can be collected, the more likely it can be successfully marketed, and new uses found for it. This echoes what Kevin Lyons of Rutgers University has said.

A separate but related issue is whether manufacturers can and should be required to design products and packaging so they can be more easily recycled, and reduce packaging in general. For example, one can feel good buying ecologically friendly Fair Trade coffee, but the package is seemingly designed to defeat any attempt at recycling.

Whether or not Mercer County finally adds plastics 3-7, aluminum trays and foil, and aerosol cans to its list of accepted curbside recyclables, at least we now have a better understanding of the first leg of our recyclables' journey back to utility.

Thanks to our hosts at Colgate for the tour!
Posted by Steve Hiltner