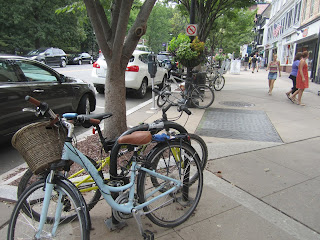 A typical scene in downtown Princeton: Seven bikes parked in this section of Nassau Street, with only two able to fit on the one bikerack provided.

Last year, bikeracks full, I tried parking against a tree. The bike slipped down, which had never happened before, causing the plastic kidseat to scrape the door of a parked car. Like in a high anxiety dream, the owners appeared behind me at that very moment, clearly alarmed at what appeared to be a significant scratch on their car--a brand new, bright red Honda Fit. We got to talking, and while the woman continued to be rightly upset, the husband and I found we had various environmental interests in common. I'm sure we would all have been great friends if not for the unfavorable circumstances. Instead, the dueling themes--a sort of musical contrary motion--continued for awhile, with no theme gaining ascendancy. There was much discussion of whether the scratch had actually affected the paint or only the wax coating. Finally, we agreed that they could contact me if I needed to pay for any bodywork. Never heard back.

In any case, the moral of this story: PUT MORE BIKERACKS ON NASSAU STREET! 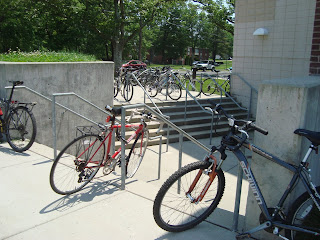 (and at the highschool, and at the middleschool)
Posted by Stephen Hiltner