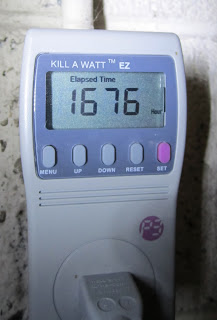 I wanted to check how much energy our new front-loading clothes washer uses. Finally, a chance to use all of that grade school math.

The washing machine has been plugged into a Kill a Watt meter for 1676 hours. Divide that by 24 hours in a day, and you get about 70 days, or ten weeks. 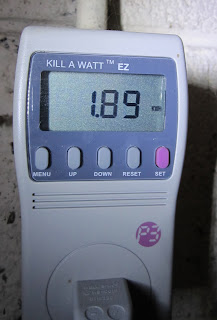 In that time, the machine used a total of 1.89 kilowatt hours, which is equivalent to using 1890 watts for one hour. We use about ten kilowatt hours of electricity every day, so the washing machine constitutes an incredibly tiny amount of our overall use.

The story would be much different if we used hot water instead of cold, and used the electric clothes dryer instead of air drying. Electricity is very efficient at running motors, like the motor that runs the washing machine, but is very inefficient at heating water for washing or heating air for drying.

Our electric dryer pulls almost 4000 watts, so in a half hour, it would use as much electricity as the washing machine does in two months! 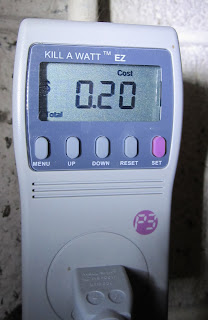 If one kilowatt hour costs eleven cents, the cost for running the washing machine for more than two months is 20 cents, total. That seems incredibly low, but there it is.

A search of the New York Times archives pulled up some interesting articles reporting on the effectiveness of cold water washing. The most recent article is here.

Another one was from 1974, soon after President Gerald Ford, in an address to Congress, encouraged people to use cold water for washing. Imagine a Republican president, or in fact any president, encouraging people to conserve energy these days. Four years ago, when candidate Obama suggested that keeping car tires inflated would save as much oil as offshore drilling would yield, he was made the butt of jokes.

Kill a Watt meters of several varieties can be purchased on the web for about $25, and local hardware stores likely carry them or something similar. An older but still very useful version can be checked out of the Princeton Public Library, thanks to a contribution years back by the Princeton Environmental Commission.
Posted by Steve Hiltner