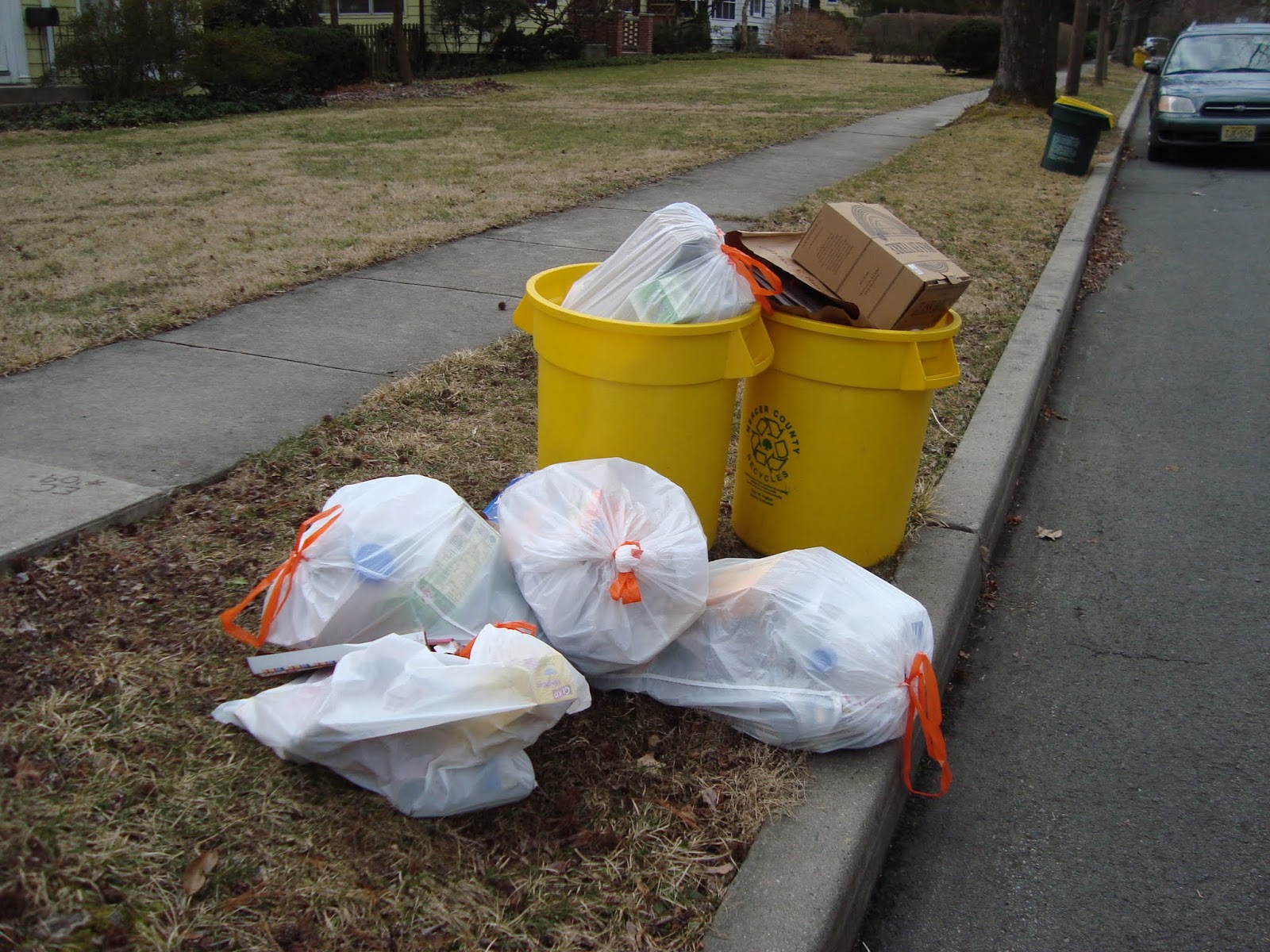 There's policy, and then there's reality. A recent posting by the county in the local paper stated what has been stated many times before in multiple media, that recyclables put on the curb in plastic bags will not be picked up. 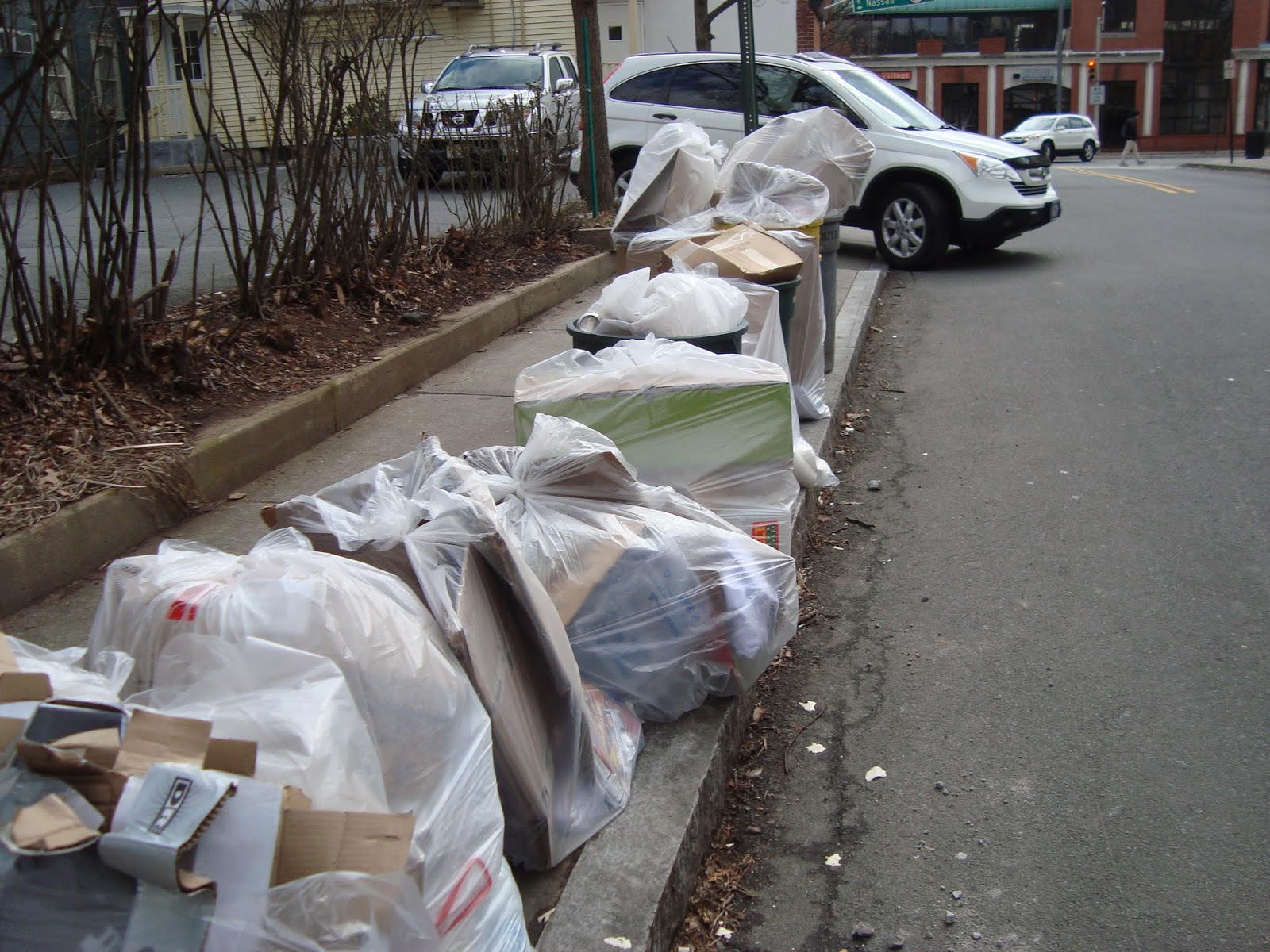 In practice, the bagged recyclables are picked up, and though the bags may cause some problems at the sorting plant, occasionally getting tangled in the machinery, the inconvenience is apparently not enough to trigger any enforcement of the policy.

Enforcement might entail leaving the bagged items on the curb, with a note explaining why they weren't picked up. But that would slow down the crews and require additional staff time by office employees to handle ensuing complaints from homeowners. 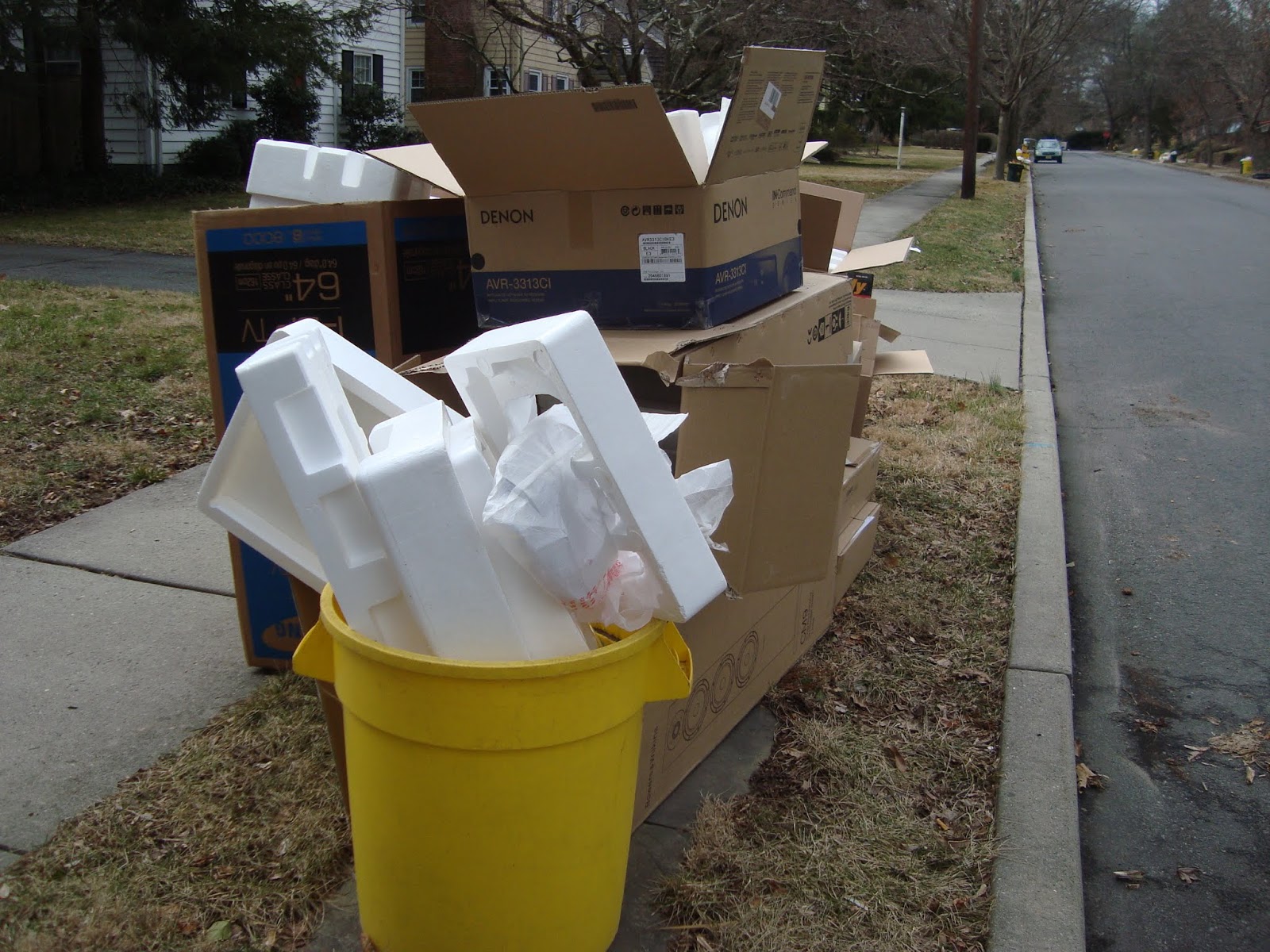 The styrofoam here is not on the official list of allowed recyclables in Mercer County. It can, however, be readily recycled, and its bulkiness will take up space whether it's hauled to the landfill or the sorting plant for recyclables. 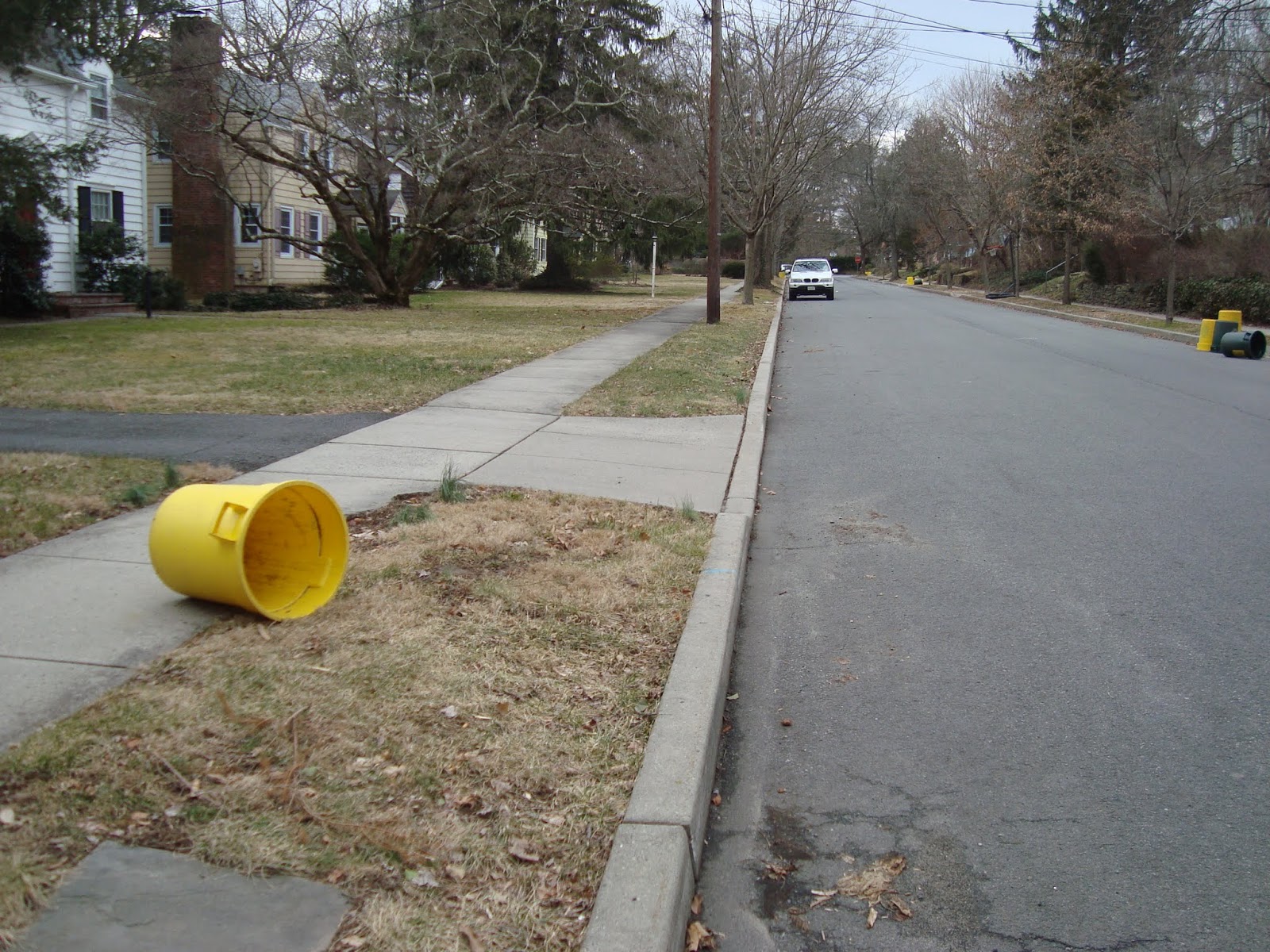 As can be seen, all of these prohibited recyclables were picked up, and all my research to date suggests that the items will end up getting recycled.

These photos also show how problematic the current 35 gallon green and yellow buckets are, as homeowners' recyclables outstrip the buckets' limited capacity, and the empty buckets roll around in the wind, blocking foot or car traffic.

Replacing them with one 95 gallon rollout bin per homeowner would provide more capacity, easier transfer from garage to curb, protection of recyclables from rain and snow, and maybe even reduced motivation to put recyclables in plastic bags, thereby bringing reality a bit more in line with policy.

By the way, the RecyclingNJ.com website, with a link above to their info on styrofoam, appears to be very comprehensive and useful for anyone with questions about recycling.
Posted by Stephen Hiltner

you may have also noticed that after a recycle day there are always TVs and other electronics that do not get picked up. There is an e-cycle program in NJ where you can drop off most electronics and the store recycles them at no charge. Best Buy is the closest that I know of, although there are many.
http://www.bestbuy.com/site/Global-Promotions/Recycling-Electronics/pcmcat149900050025.c?id=pcmcat149900050025

Suggestion: Why don't some local entities--such as Sustainable Princeton, Princeton recycling office, and any similarly likeminded and interested counterparts of neighboring municipalities--come together to organize a public presentation and question-and-answer session with representatives of the Mercer County Improvement Authority and its commercial recycling contractors?*

(FYI, a couple years ago something of this nature was proposed to the Princeton Public Library's Environmental Film Festival, although nothing became of the idea; but perhaps PEFF's coordinators may still have the informal document and be willing to share content?)

The purpose of proposed event would be for overseers and processors of collected recyclables to respond to the very observations you've raised and which many of us, too, have noticed and by which we remain perplexed. The intended outcome would be to better educate the public about _current_ curbside recycling procedures and processes, with a goal of lessening contaminants and improving overall recycling rate--something that all levels of government in our area should endorse for a variety of reasons.

As someone who has enquired of County's MCIA recycling office to try to clarify specific details, I have been disappointed thus far by the vagueness and inconsistency of information available. *Participation by, and specific information from, Couty's and contractors' senior managers is essential, otherwise there would be little value in such an event. Properly organized and present, however, this could be an opportunity to change things for the better.

What do you say?

I tried responding to this while out of the country, but somehow it didn't show up on the blog. As I may have mentioned in a previous post on recycling, I asked the people at the sorting plant what contaminants are most problematic for their operation, assuming that they have clear concerns that they would very much like to communicate to us recyclers. But they didn't really respond with many suggestions. It is typically very difficult to reach enough recyclers, and get them to actually change their recycling habits, to make any difference in the mishmash the sorting plant receives. I'm guessing they just deal with what they get.

In terms of getting all parties together in order to benefit from all perspectives, I have found similar gatherings less helpful than I had hoped. There seem to be political, economic, and/or personal impediments to people being forthcoming. For example, those who provide a service may be reluctant to say anything that contradicts those who pay them for the service.

Princeton Future may be planning a meeting this coming month in which all aspects of solid waste in Princeton will be discussed, with a variety of perspectives included. This may prove to be the sort of meeting you're envisioning.

Regarding your March 22, 2013, post. . . . Thanks for relating experience of trying to clarify which items currently are truly acceptable in local curbside recycling schemes, plus apparent counter-intuitive reluctance of governments and their contractors to provide public information and outcomes sought. Would be surprised if Princeton Future were to present such detail, although would be helpful if it could help arrange such an event.

Alternatively, on a one-time basis, perhaps "we" (that is, you and others who are familiar with such things!) could establish (at this website or elsewhere) a place to post residents' and small businesses' questions that could then be compiled and forwarded (perhaps by Sustainable Princeton or others) to MCIA and its recycling contractor for answers, which could be publicized (on similar website) to encourage greater participation and better quality curbside recycling?