House Made of Bottles 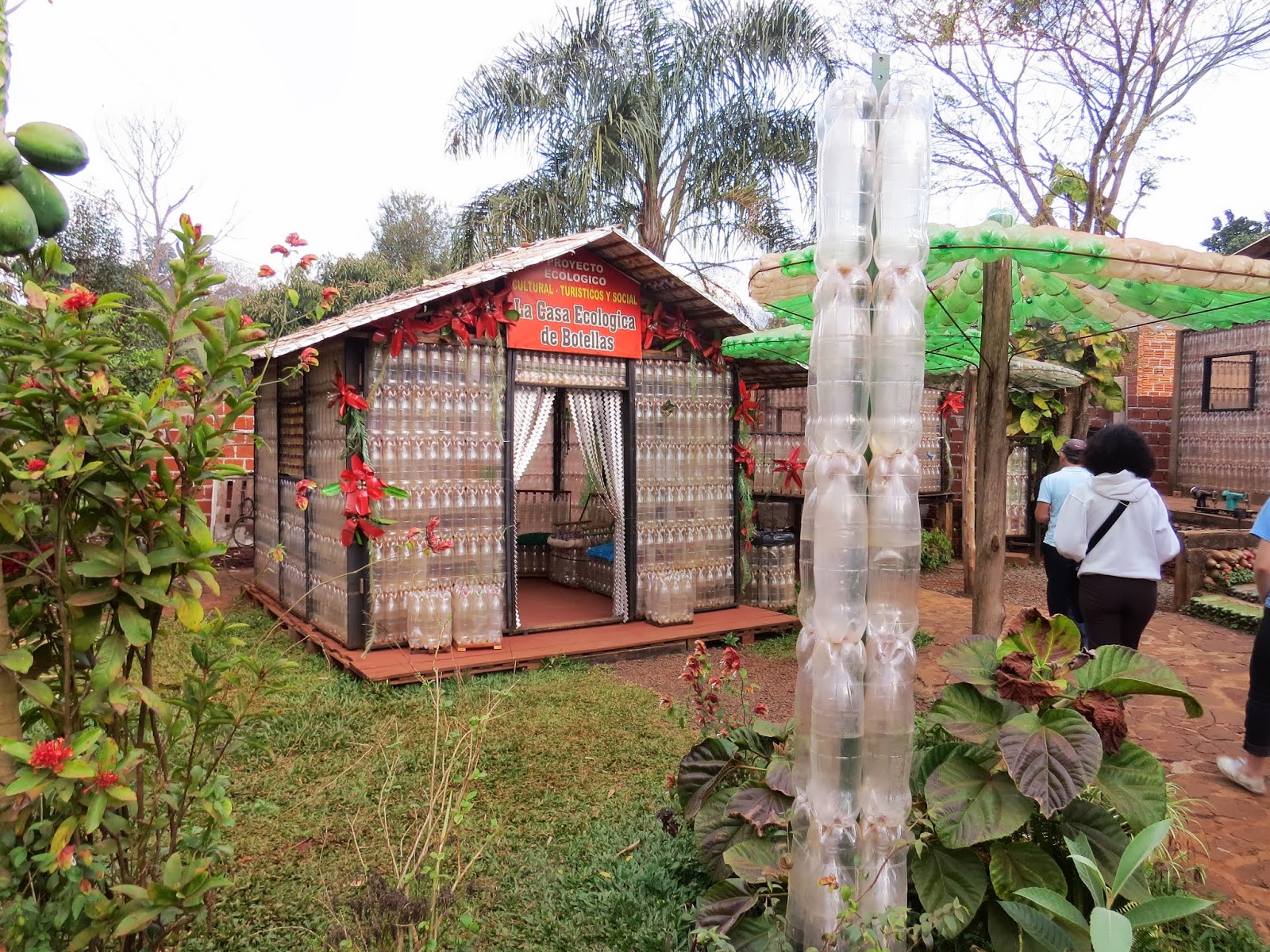 One way to bottle up some of those plastic bottles that scatter across the landscape, or float out to sea to form widening gyres of trash, is to build a bottle house. You can tell from the palm trees in the distance, and the papayas poking their way into the photo on the left, that La Casa Ecologica de Botellas is not in Princeton, New Jersey, but instead somewhere seriously south. An Argentine in-law told me of a documentary on bottle-built houses she had seen, and a little internet research showed one to be in Puerto Iguazu in the north of Argentina, where we were headed for a visit to Iguazu Falls. 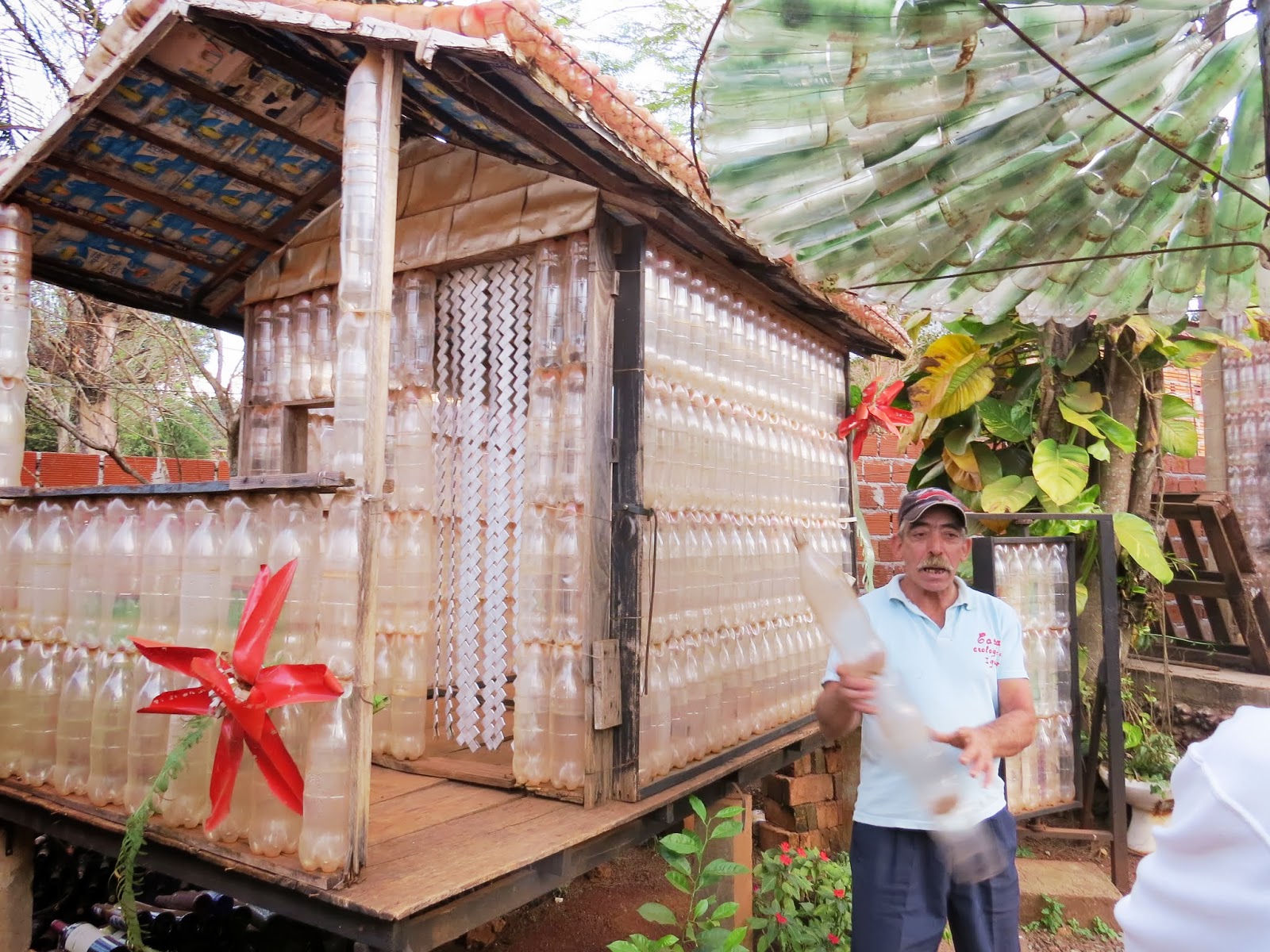 What is now a worthwhile stop for tourists, and a bit of a cottage industry on the outskirts of town, began with the economic crash of 2001, when Alfredo Santa Cruz was forced to search through rubbish for items he could sell. The first structure was a playhouse for his kids. 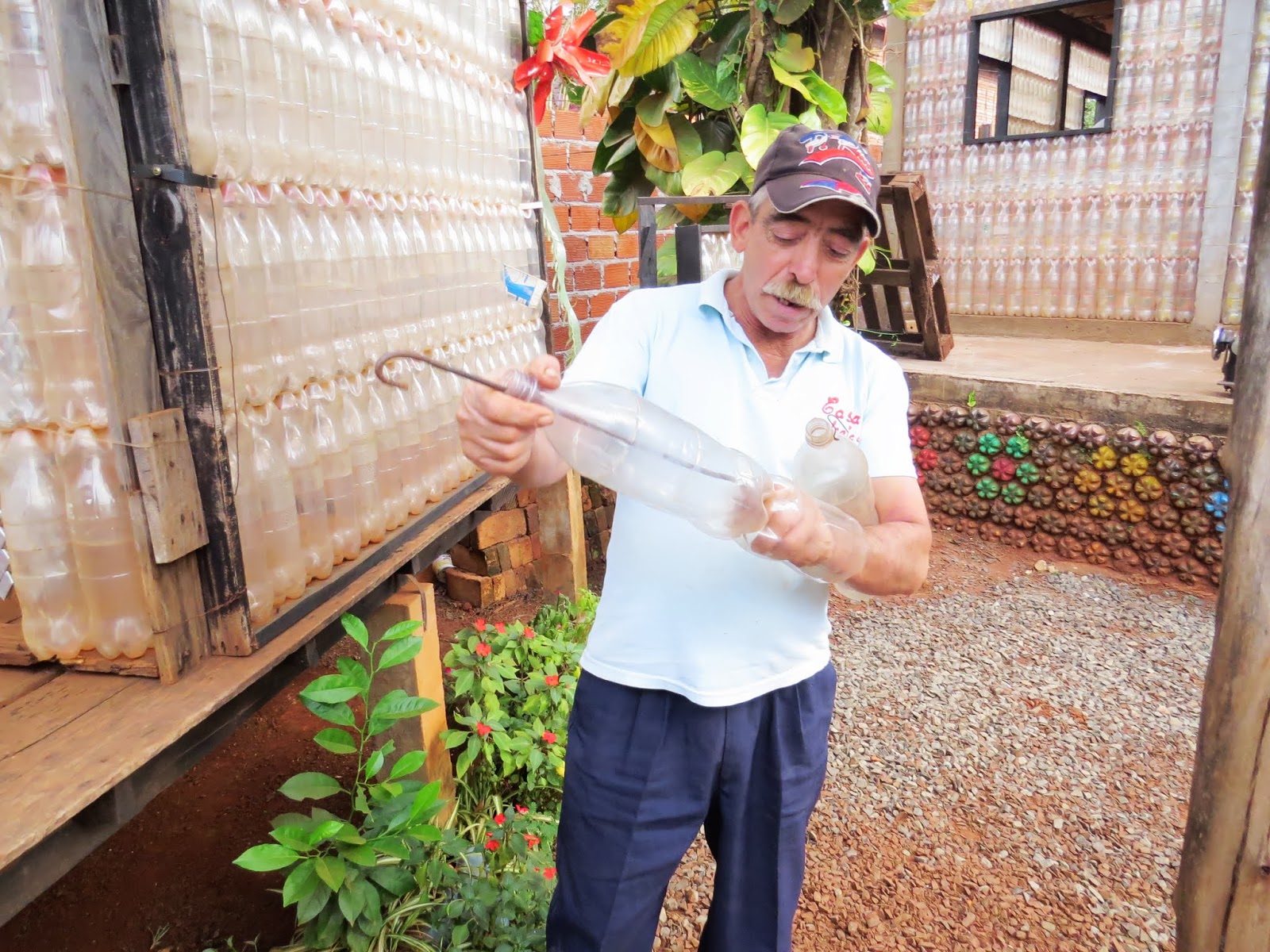 As our tour guide demonstrated, begin by screwing one bottle to the bottom half of another, using a long, improvised screwdriver, to form the basic building block. 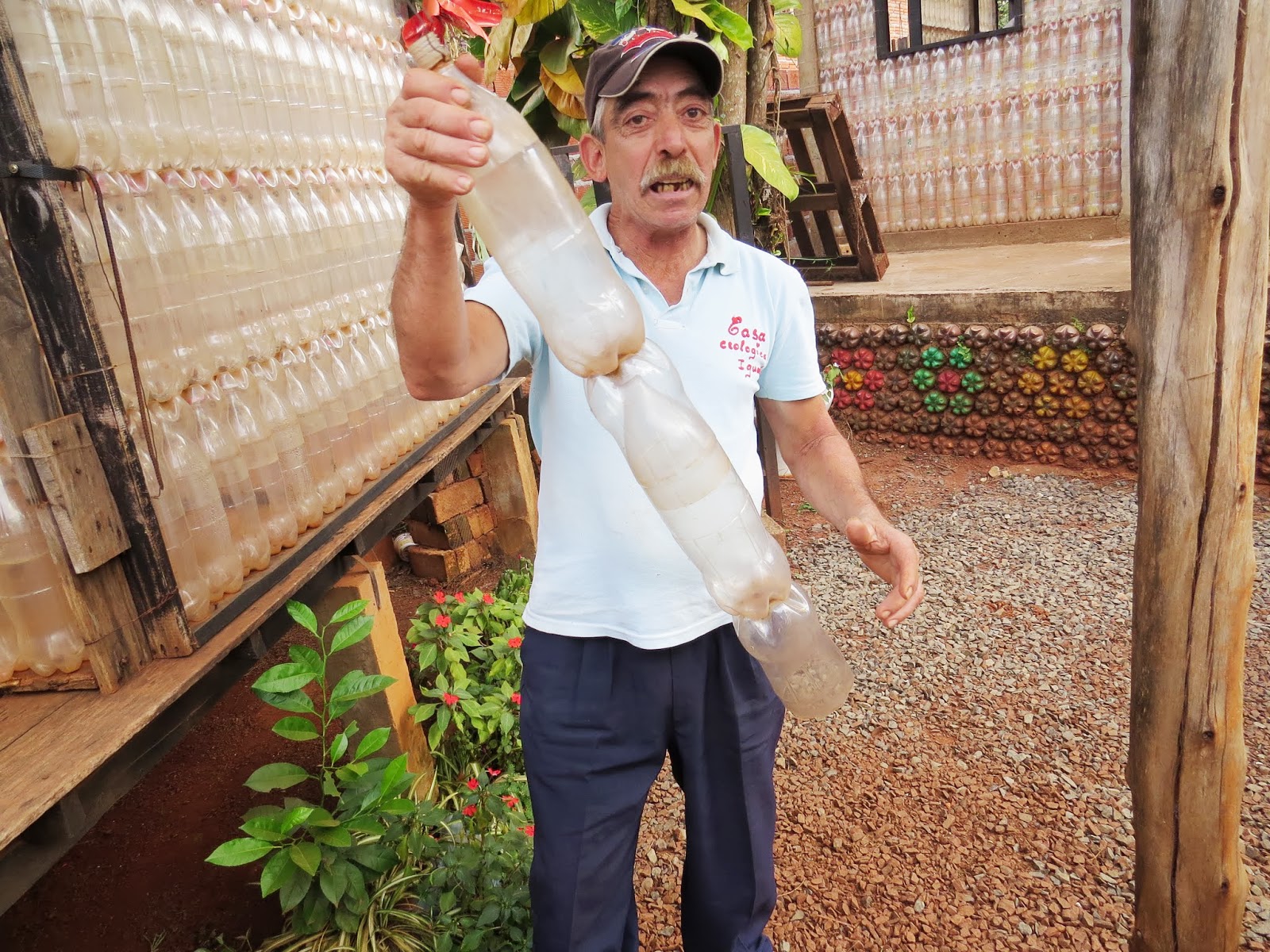 Slip the top of one building block into the bottom half of another, and one column of a wall starts taking shape. 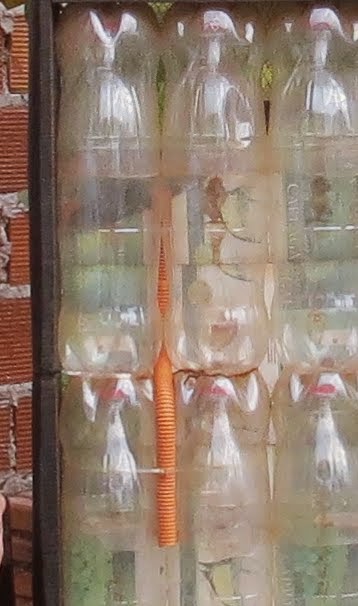 Better Spanish chops would have deciphered the guide's explanation of the tubing run through the gaps in the plastic wall. Electrical, maybe? The columns of plastic are tethered in place using plastic strips cut from plastic bottles, 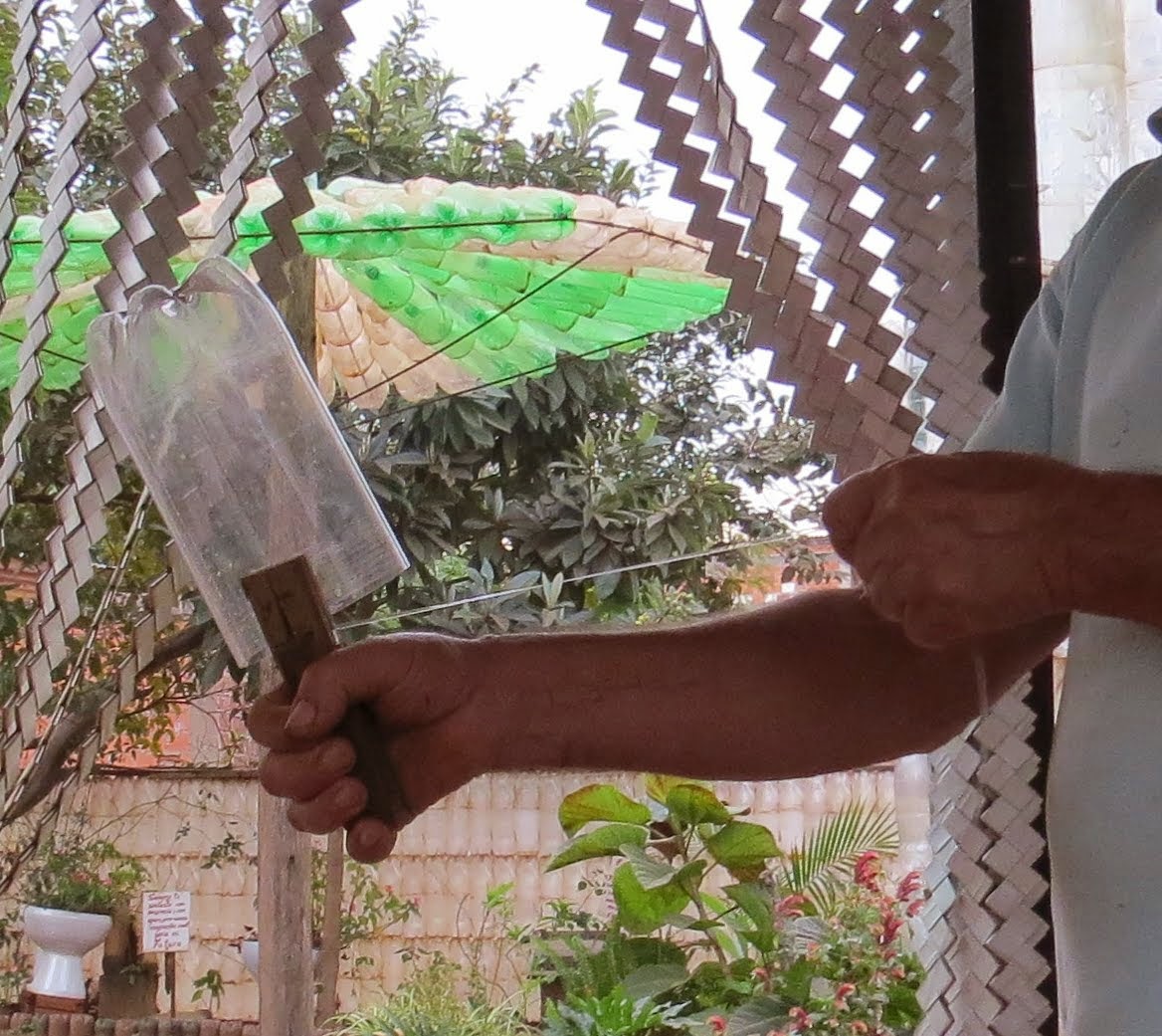 using a clever homemade contraption. The bottle fits into a slit in the wood, in which a blade is mounted to slice long strips in a spiraling fashion off the bottom edge of the bottle.

To fill in the holes in the walls, a layer of what looks like milk cartons is covered with wire mesh to which plaster is applied. 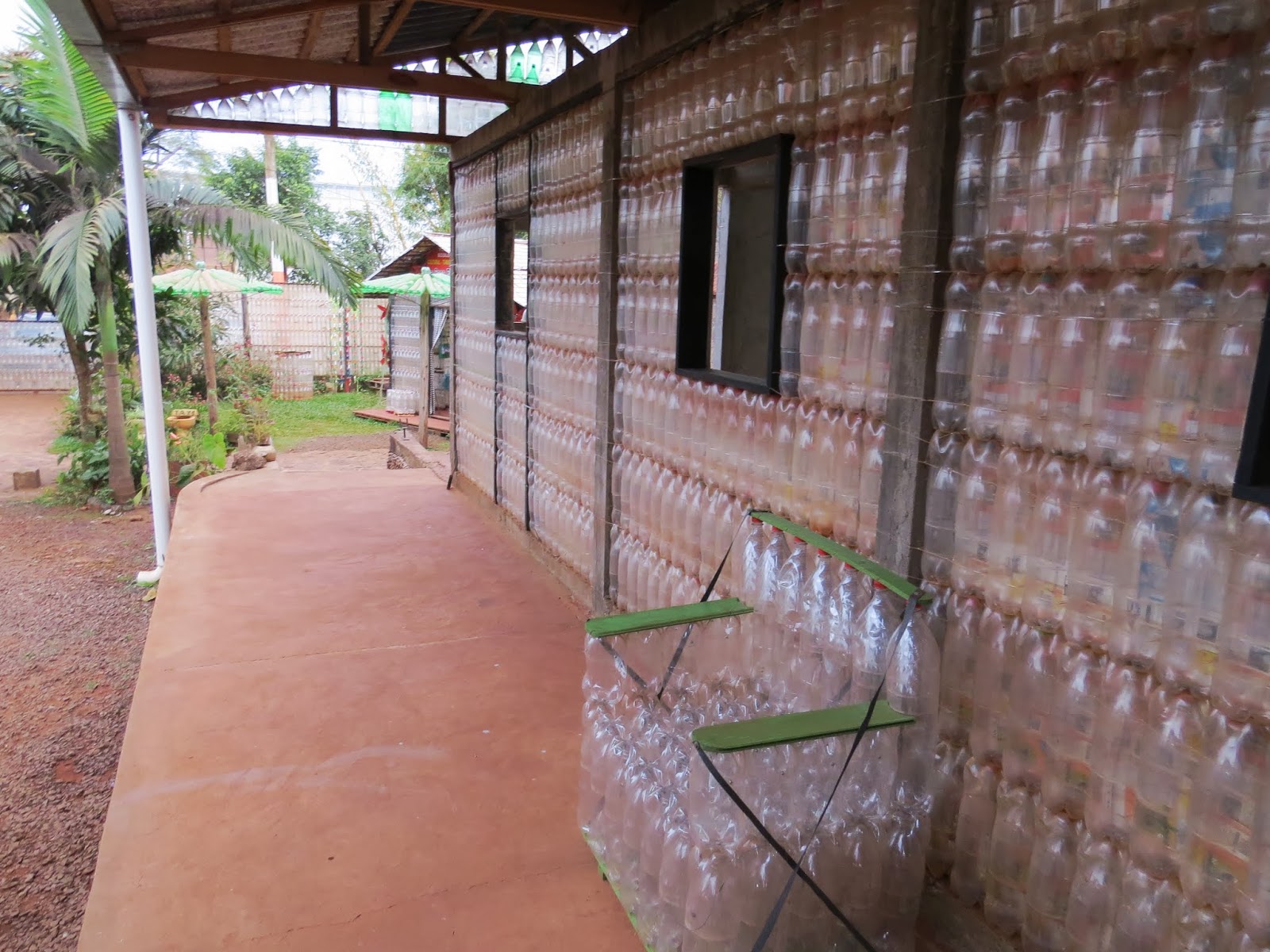 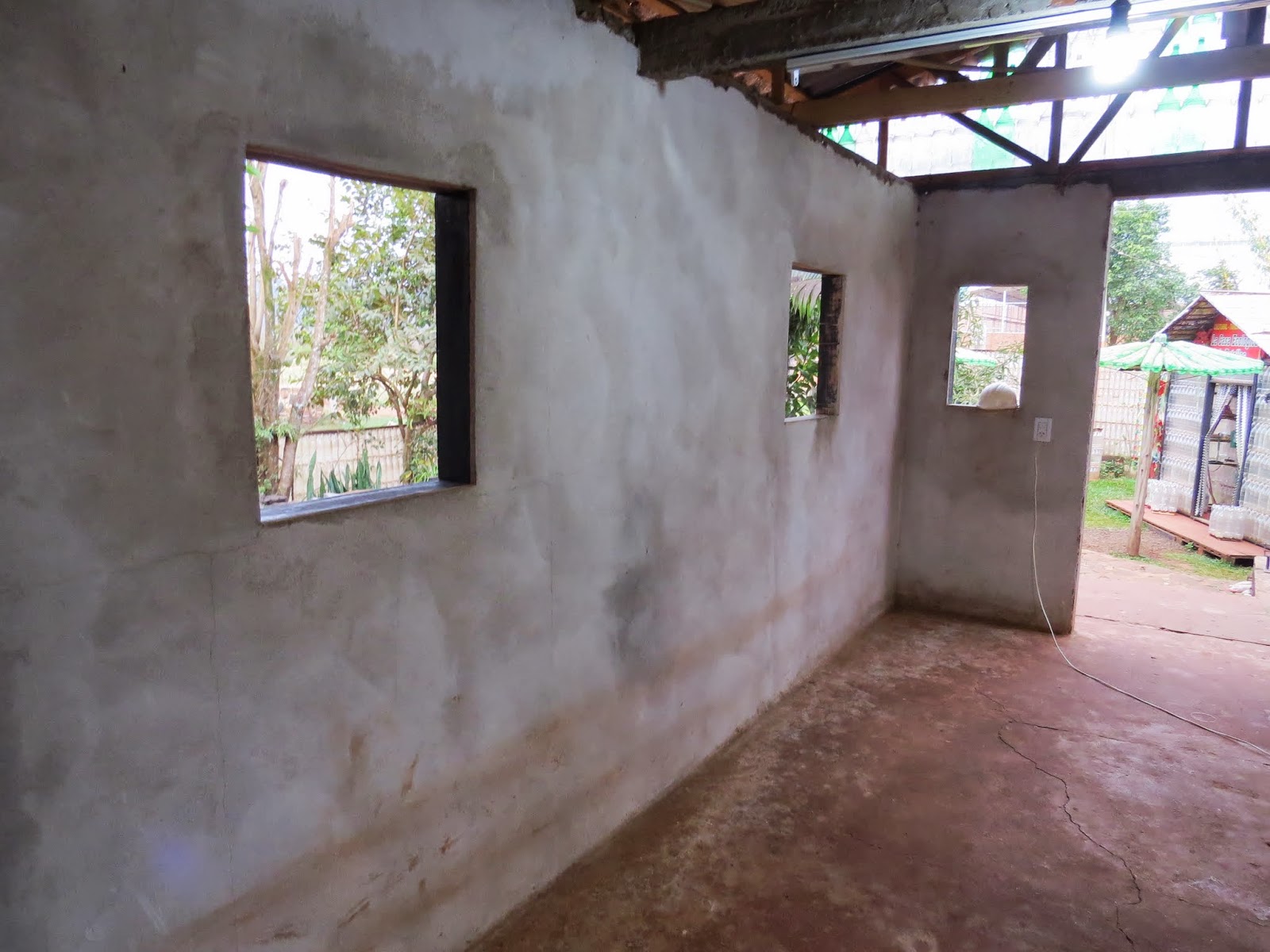 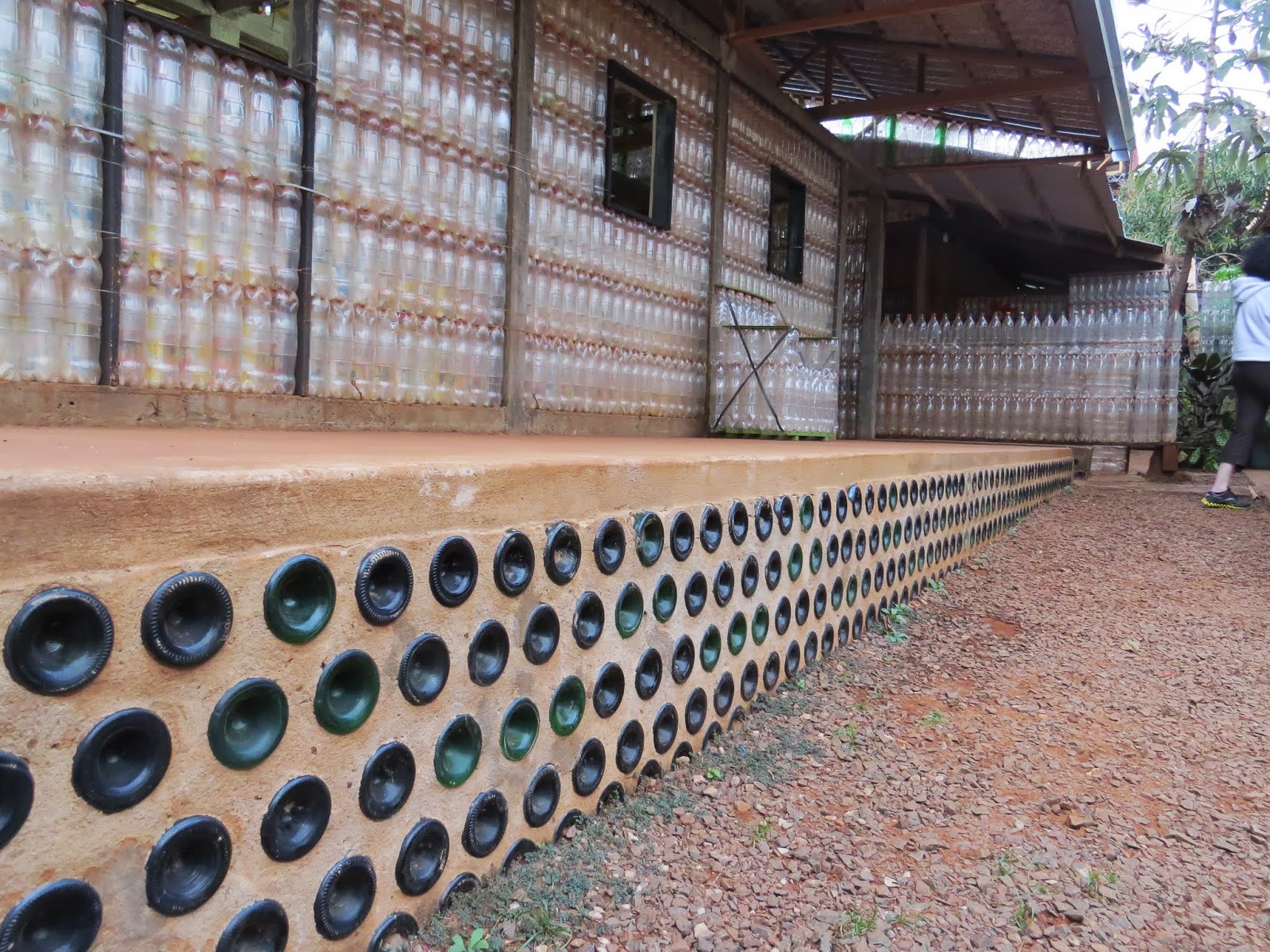 Glass bottles get into the act for the foundation. 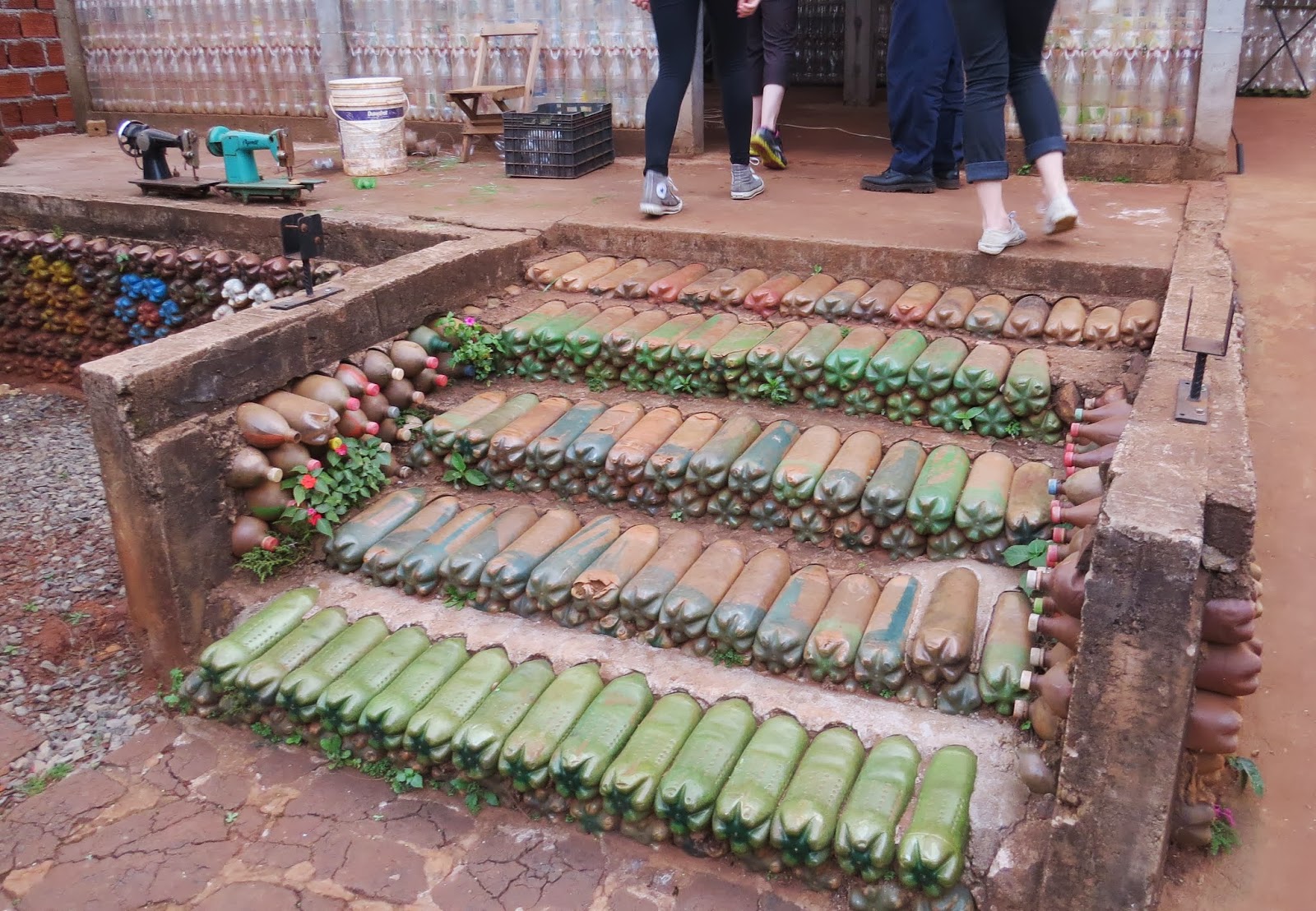 Plastic bottles filled with sand are used for the front steps. Many bottle houses use these for the walls as well, but pouring sand in each bottle is a tedious process. 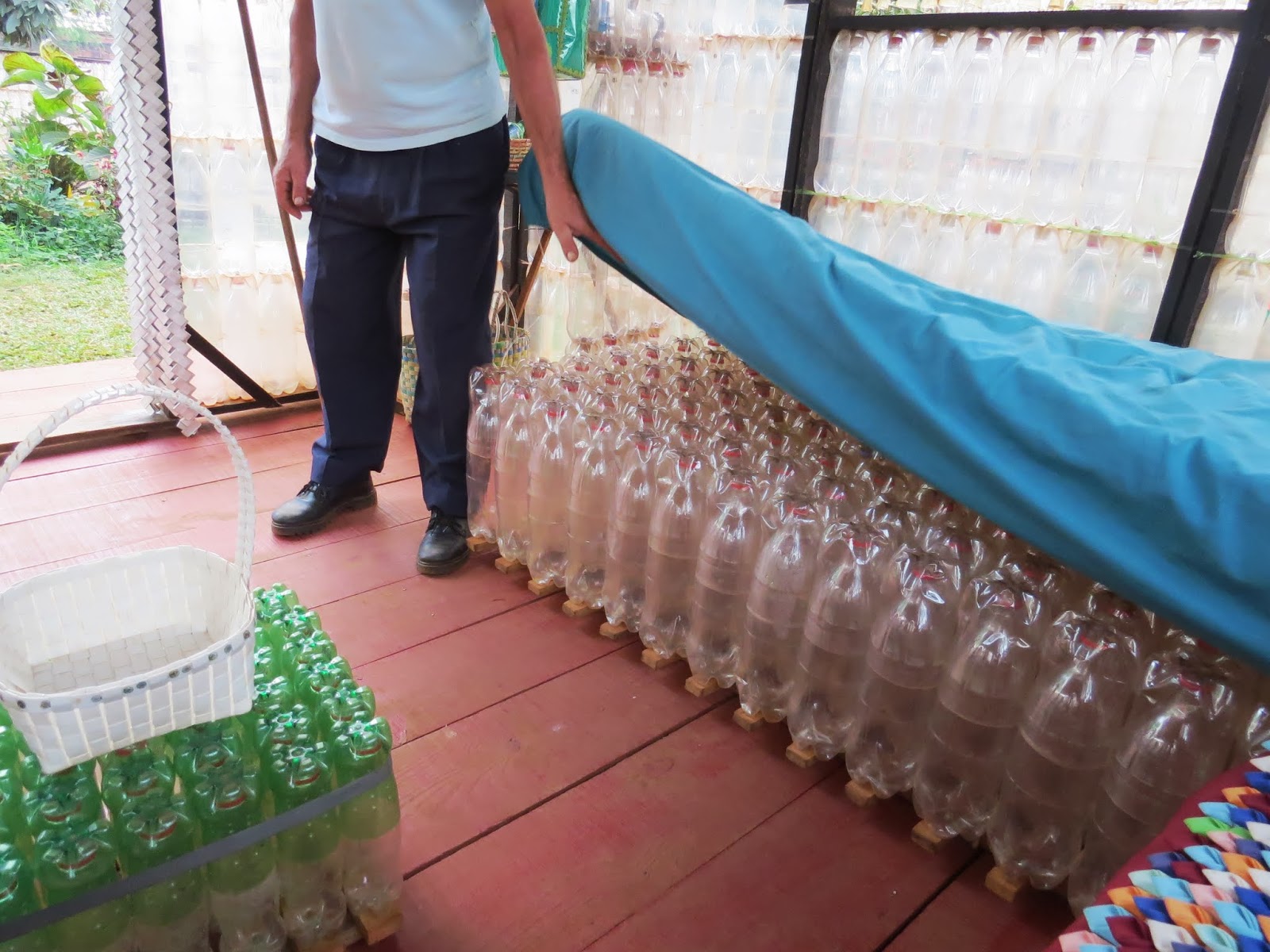 No bottle house is complete without a bottle bed, bottle chairs, 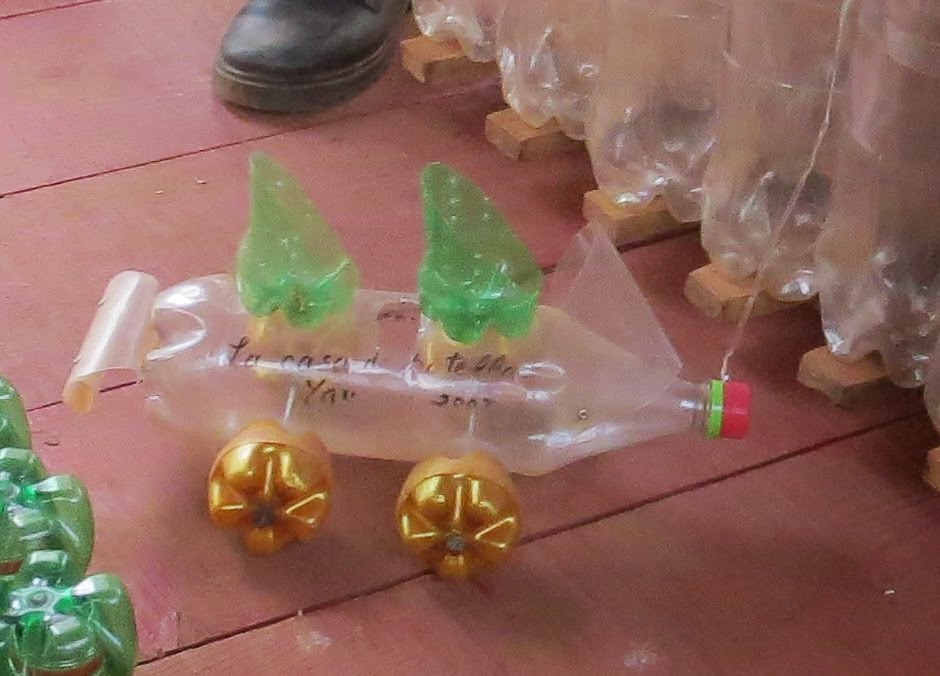 and a bottle pull toy. 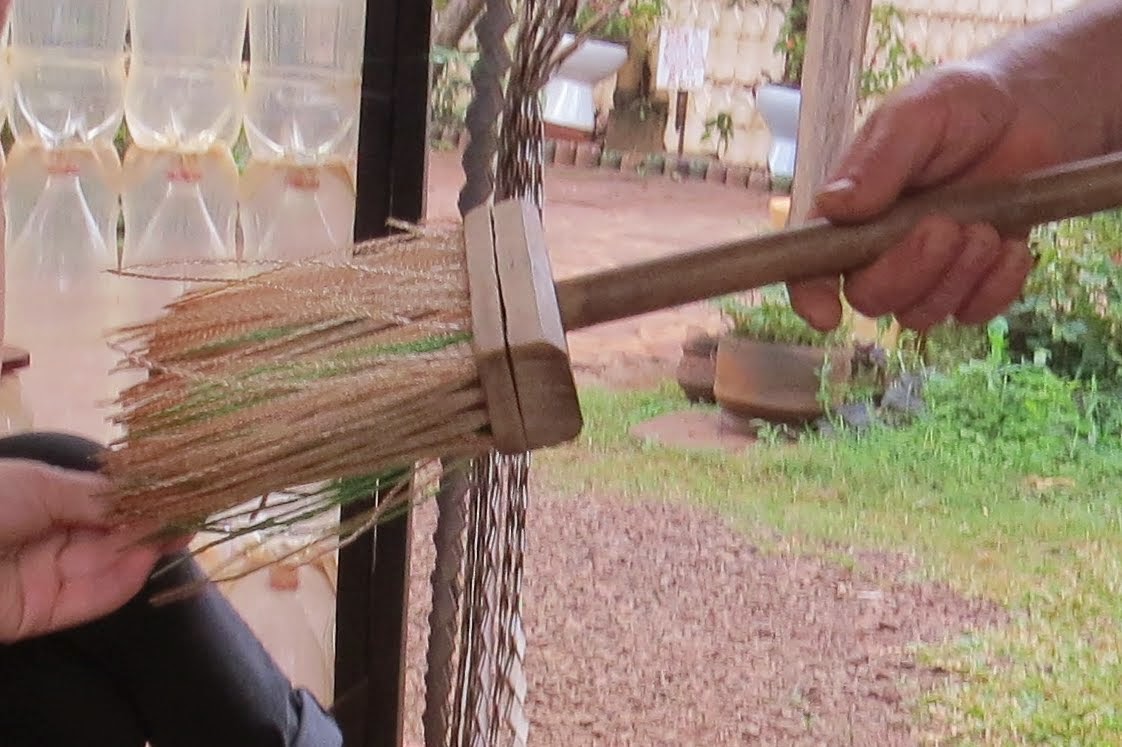 Those plastic strips look here to have been twisted to make hairs for a broom. 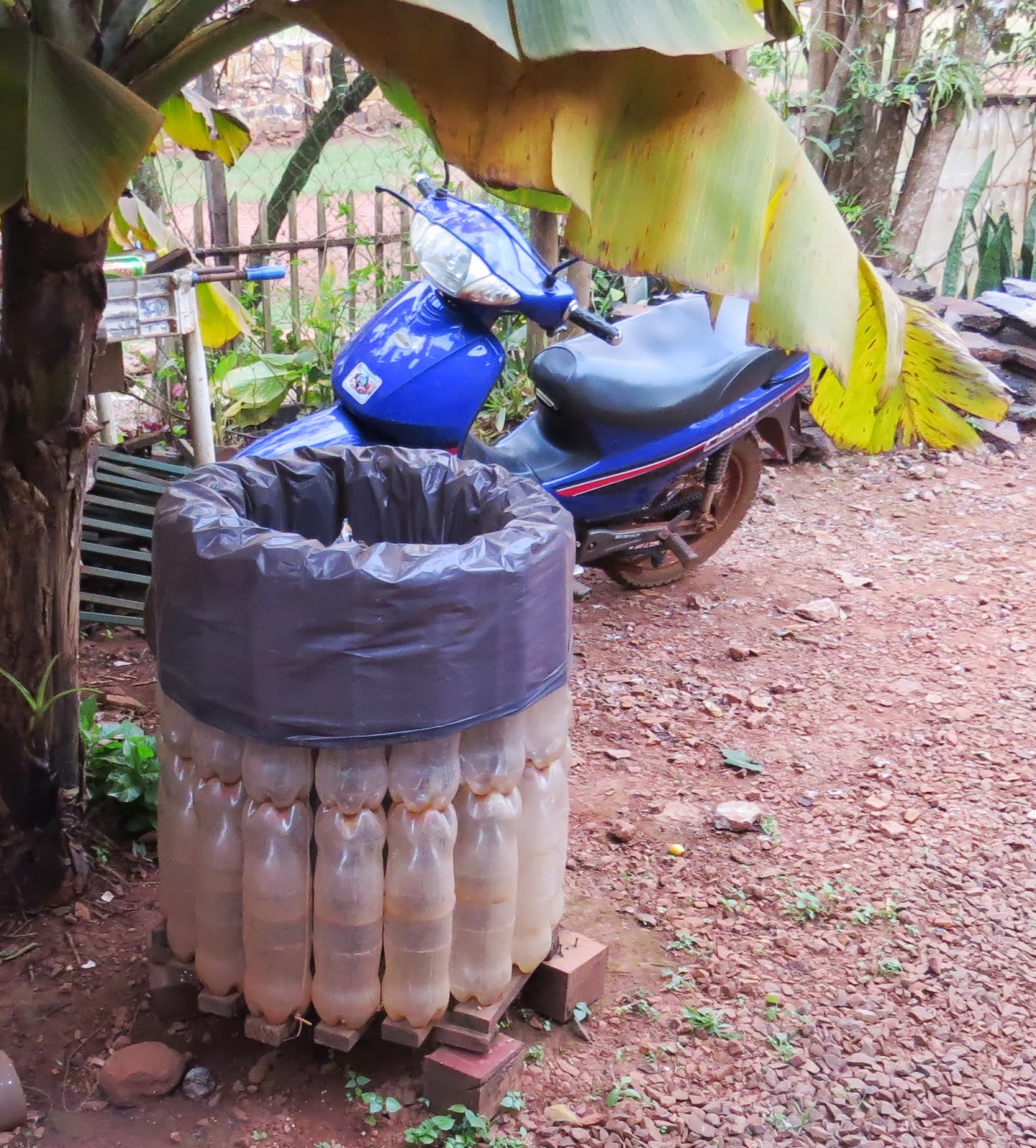 And then there's the bottle trash can 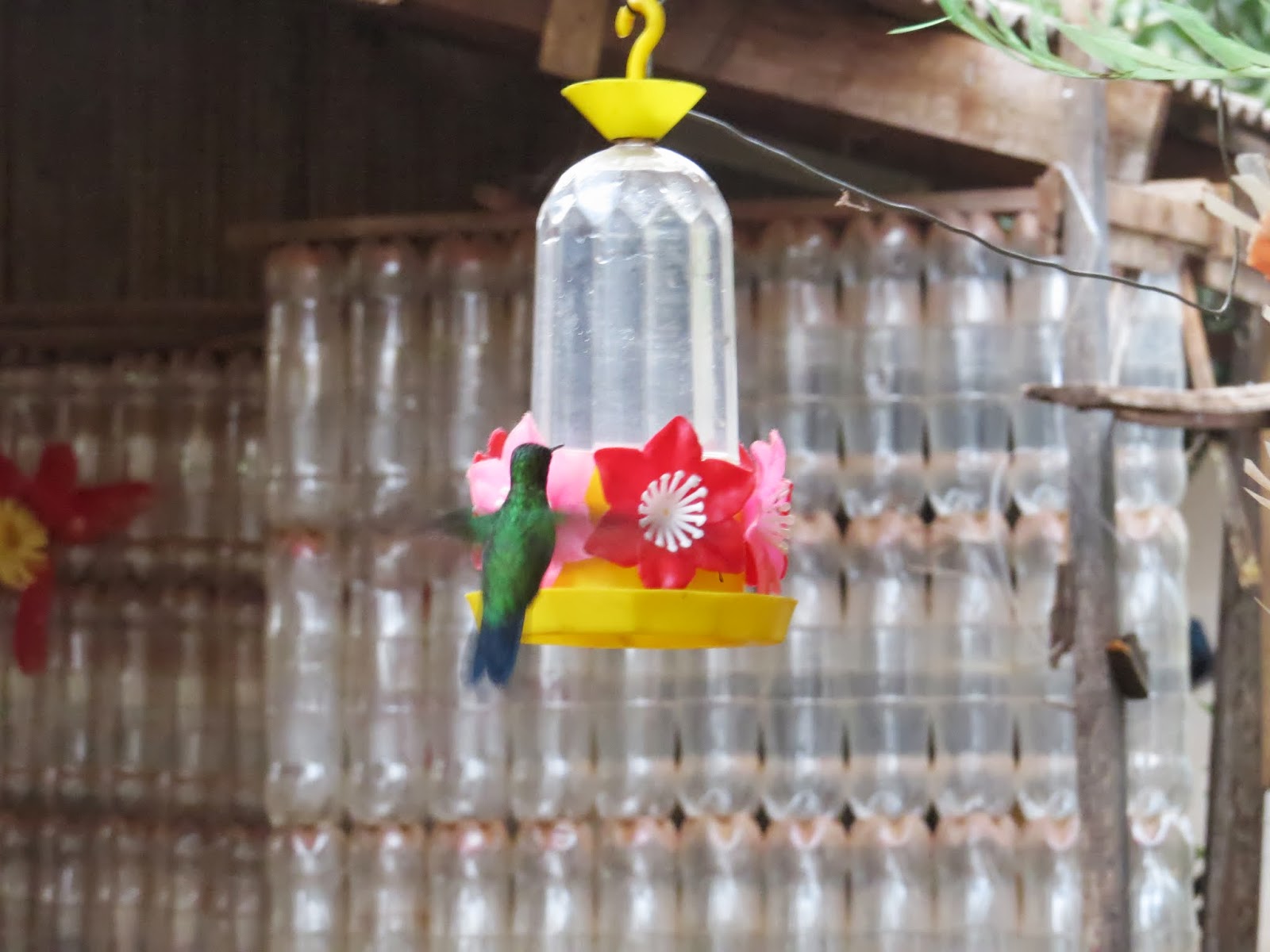 and the well-attended bottle-like hummingbird feeder. 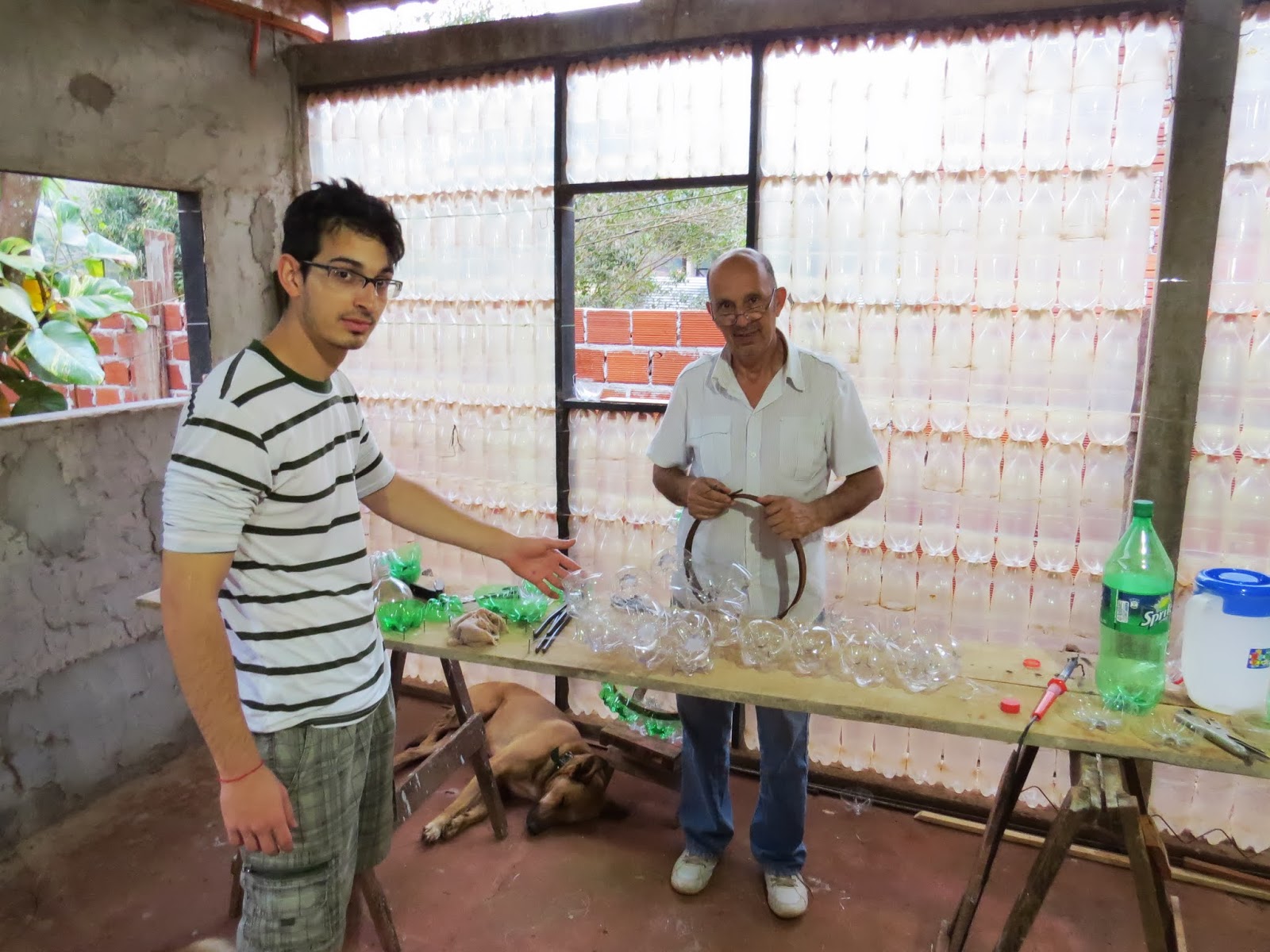 Plastic bottle lamp shades look to be the next invention to come out of the family's workshop. 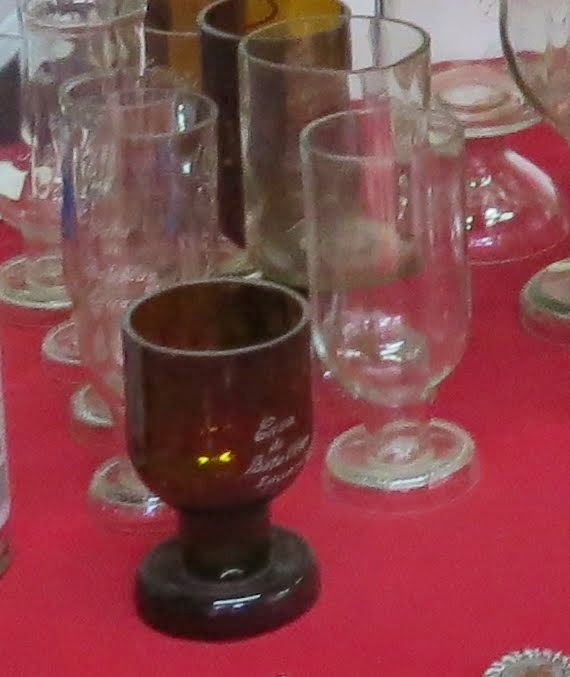 On the way out, there were glasses made of repurposed glass bottles, 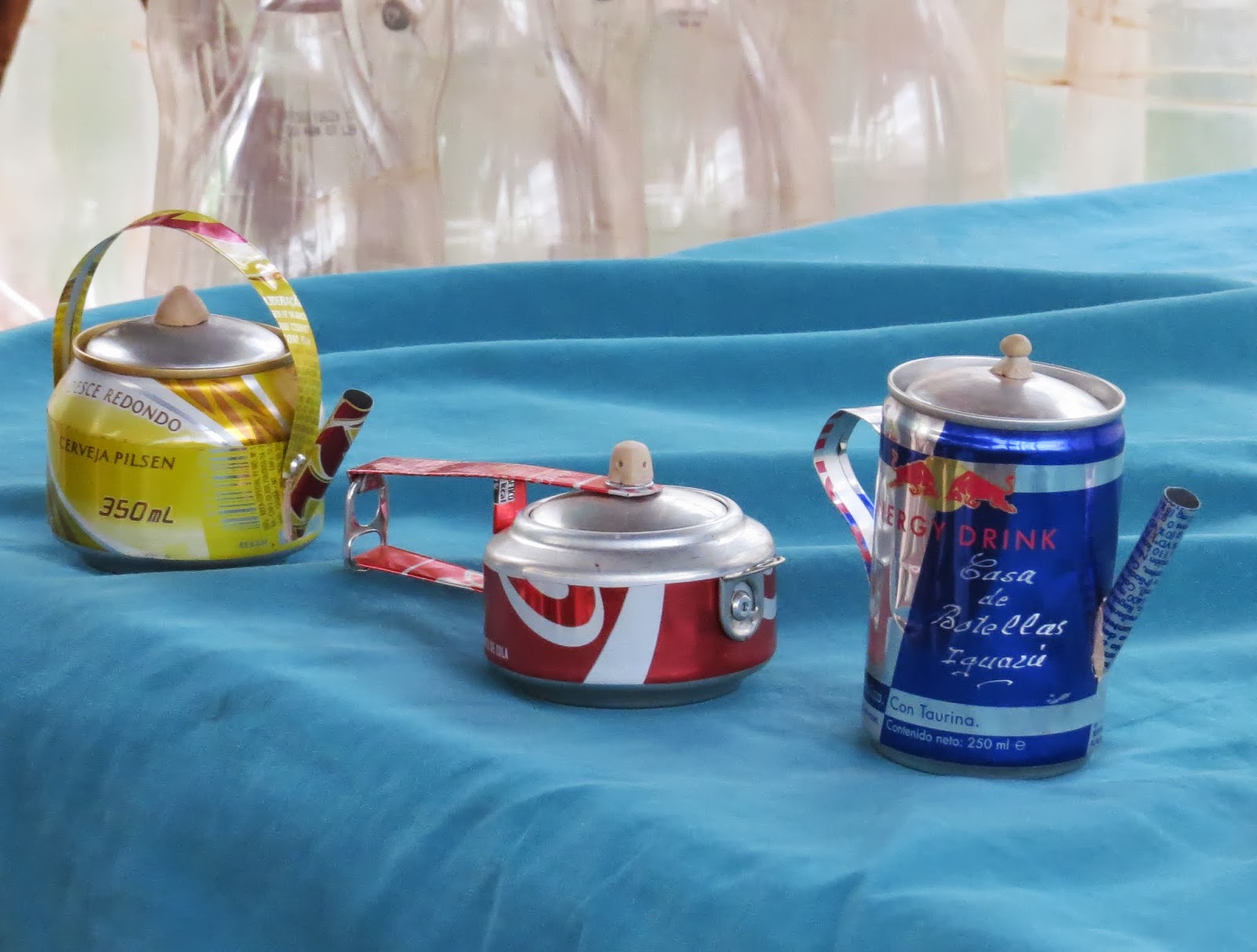 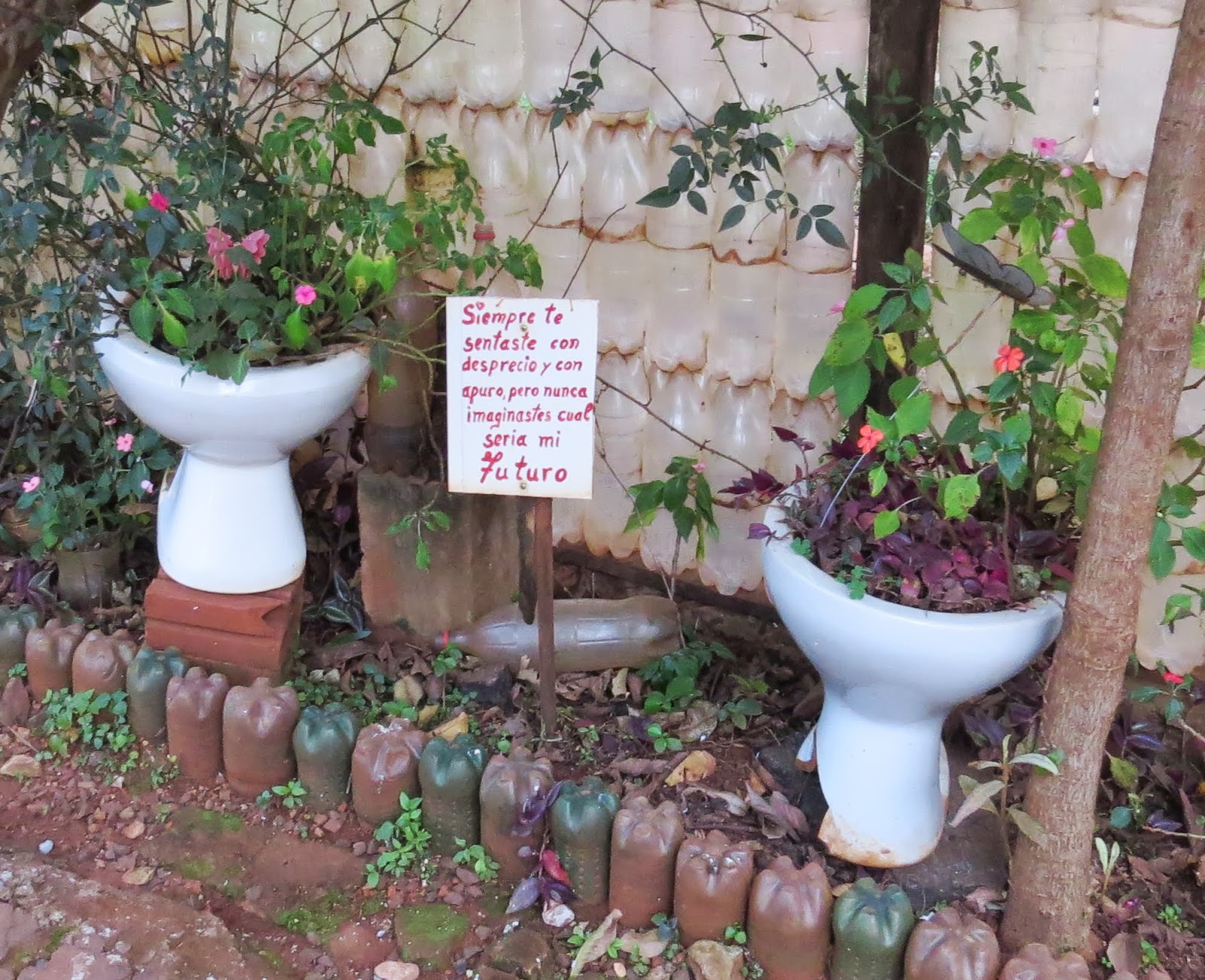 and a sign speaking to people's lack of thought about what happens to what we throw away.

More info at their website. A short BBC video here.

Title of the post comes from House Made of Dawn, by N. Scott Momaday, in which he writes of his friends growing up who lived all too disposable lives. "There was a house made of dawn. It was made of pollen and of rain, and the land was old and everlasting."