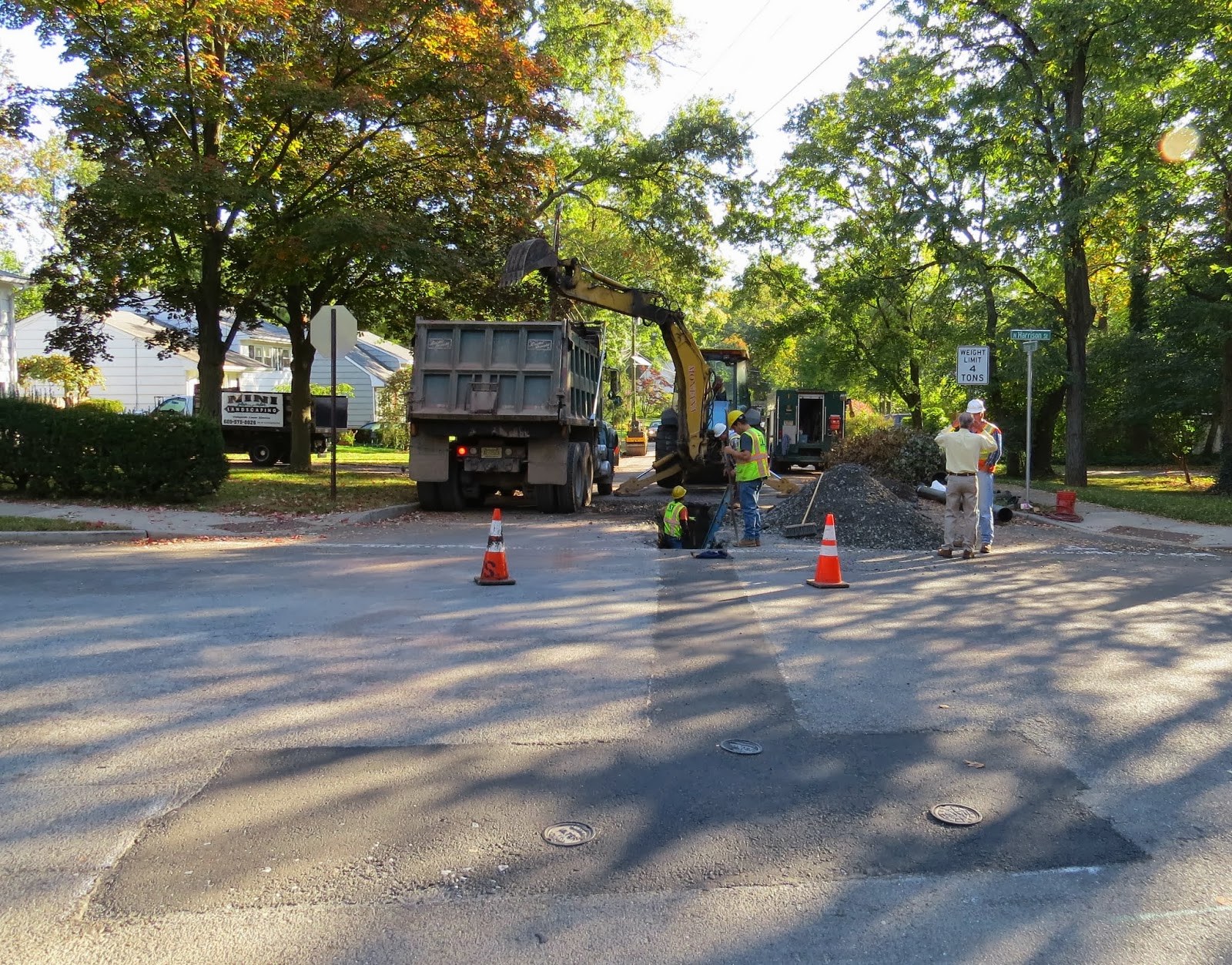 As Yogi Berra, the famous installer of urban water mains, once said, "It ain't over 'till it's over." The sound of yet more heavy equipment groaning on a nearby street yesterday meant that the climactic overnight repair blitz the other night had segued into a surprise encore. I went out and got the lowdown from the American Water supervisor about the water lines that run beneath the fair streets of our fair town.

He said they would have finished the other night, but they had been slowed down by careful digging in the vicinity of a high-pressure gas line that turned out not to exist. Though no alligators have been found beneath Princeton's streets, that I know of (now that would be a scoop), there are a slew of pipes, and sometimes the various utilities forget where they put them all.

Each year, they choose some more water lines in Princeton to replace. There are several reasons for this gradual updating. The pipes here on Horner (one of the founding families of Princeton, by the way) are probably 60 years old, and are made of cast iron. Because cast iron reacts with the chloramines that are used to disinfect our drinking water, the new pipes are lined with concrete in order to prevent contact with metal. The pipes are also laid in a bed of gravel that will reduce the stress on the pipes from the ground's shrink and swell. The new 8" pipes replace the old 6" ones, meaning more water flow capacity, just in case anyone wants to pour more drinking water on the lawn.

The supervisor proudly pointed out that no one loses water service during these updatings. Because the water lines form an interlinking network under our streets, the break in the water line during replacement doesn't affect anyone's water access. The water is simply "backfed", which means it flows in from the other end of the street. The water lines, like the streets, allow flow in either direction.

At the same time, the company is replacing water meters for each residence. The foreman explained that two-income households make it harder to access indoor meters during the day for monthly readings. The new meters transmit their information wirelessly to a meter guy driving down the street. Within a few years, they may put antennas on the tops of water towers, and simply collect individual meter readings that way. There's a gain in efficiency but also a reduction in workforce needs. It would be nice if these boring jobs like reading meters, once phased out, could be replaced by more interesting and useful jobs, but I don't think business works that way.
Posted by Steve Hiltner