Election Brings Out Crowds, Dogs and Icons to Vote 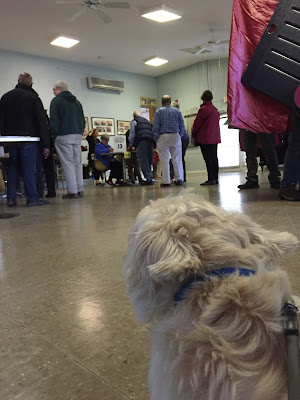 Please. No accusations of voter fraud. My dog Leo did not vote, although there are times when I think he is the reincarnation of Albert Einstein. Icons, particularly those as thoughtful and wise as Einstein, should be able to come back and vote any time they want. 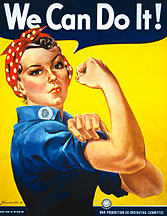 Another icon, Rosie the Riveter, recently came out of retirement to endorse Hillary Clinton. "Every vote for Hillary is another nail in the coffin of the Trump campaign," she said, rolling up her sleeves. "And that lid needs to be nailed so tight that no one can ever open it up again." She said her decision to return was based on a deepening concern that democracy was coming apart at the seams. "And the only way to hold it together is to vote!" Her steely gaze cut me to the quick.


The vote for Hillary was by far the easiest. As Louis CK said on Conan, "If you vote for Hillary, you're a grownup. If you vote for Trump, you're a sucker. And if you don't vote for anybody, you're an a**#%!e." Being no doubt responsible for making the polling place more crowded than ever before, Trump, with his knack for saying increasingly repulsive things, has clearly been trying to unite the nation, against Trump, whether he's aware of it or not. Tonight we'll find out if he can claim this weird sort of victory through resounding defeat. 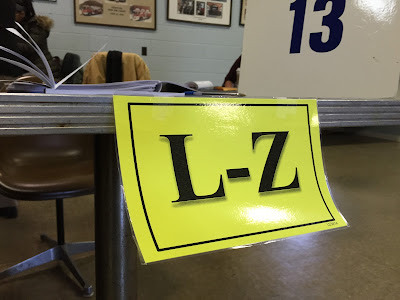 Meanwhile, democrats are shoe-ins locally. Leo was at the right height to spot this not so subtle plug for a certain mayoral candidate.

I actually brought Leo along to serve as my advisor on some of the more vexing decisions--the sort that make us hapless citizens wish for a benign dictator, or at least a friend who has the inside story--like who to vote for for schoolboard. And that Public Question #2, about whether the newly added 23 cents per gallon gas tax should be constitutionally required to be spent on roads, bridges and mass transit? My thinking, based on this article, resembles a Gordian Knot.  Some of the money will go to mass transit (good, particularly given Christie's decimation of state support for NJ Transit). But roads and bridges are climate change factories, so why support them? But good maintenance will reduce overall expense in the long run. And if we switch to electric cars and boost wind/solar energy, we won't feel like participants in global terrorism while driving down Route 1. And people prefer the independence of car travel, and trains/buses add to climate change, too. But potentially less so. Constitutional amendments reduce flexibility, but how likely is it that lawmakers will use flexibility wisely? The article says people angry about the gas tax increase are voting no, but taxes on carbon are good, so maybe vote yes just to avoid sounding anti-gas tax. But then there's all those robocalls from "Road to Repair" paid for by the Engineers Labor Cooperative, who claim that groups opposed to the gas tax are voting yes on Public Question #2. Confusing, which is why I brought Leo along, hoping his canine intelligence would cut through all of these layers of complexity. 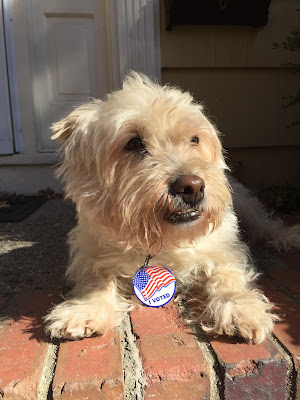 Wait a minute! Who's supposed to be doing the voting around here? Now you just know somebody's going to say the election was rigged after all.
Posted by Stephen Hiltner